In February, PhD student Niki Tulk presented her multimedia installation piece, Ex Cutis Libra, at the CMCI media space. The work explores poetics around the ethics, archives and material process of binding books in human skin. She successfully defended her IAWP dissertation, "Trauma, Text and the Female Body: a Multi-Media Exploration in Three Acts,” and successfully defended her second doctoral dissertation in CU’s Department of Theatre and Performance Studies, making her a rare double PhD! In August, Tulk will become an assistant professor at Alfred University in New York, where she will help build an interdisciplinary performance program within the College of Art and Design, while continuing her role as co-editor of PARtake: The Journal of Performance as Research. 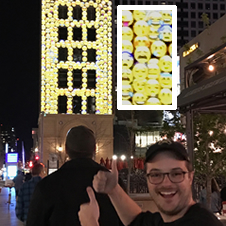 PhD student Ryan Wurst has a number of upcoming exhibition and performance projects happening throughout Colorado, including Fill the Clock Tower with Emotion, a digital projection on the Clock Tower in Downtown Denver, Oh, Mouth Breathers! at the Lakewood Cultural Center, and Mouth Breather Broadcasting Systems at Understudy in Downtown Denver. Wurst will also be starting his new appointment as a professor of digital arts at Florida Southwestern State College in Fort Myers, Florida, where he will design and implement a new digital and electronic arts program for the college.

PhD Student Laura Kim received the New Media Caucus Distinguished Scholar Award from the New Media Caucus at the College Arts Association (CAA) in New York. Her projects were selected for numerous exhibitions and screenings, including the Performative Computation Symposium at NAVEL, Los Angeles; the Lumen Prize collection for Mueral; the Cambridge Science Festival for HOT STEAM, to be held at MIT Museum in Boston; the Museum of Human Achievement for Fusebox Festival in Austin; and Queer Rebels Experimental Shorts in Oakland, California.

In addition, Kim’s collaborative, practice-based research with Professor Mark Amerika was showcased at the College Arts Association’s poster session. Her projects have been selected for both national and international publications, including in Biodigitally, curated by Hervisions and published in Important Magazine, and GUEST [a journal of guest editors], published by Above/Ground Press. Her work will also be included in the “Apocryphal Technologies” issue of the scholarly journal continent., with an introduction by Associate Professor Lori Emerson.

Kim performed at On The Boards with Professor Michelle Ellsworth for The Rehearsal Artist in Seattle and at Ground Floor Theatre for Fusebox Festival in Austin. She has been invited to give artist talks at Colorado State University as part of the Electronic Art Speaker series, as well as at the International Symposium on Electronic Art (ISEA) in Gwangju, Korea. She will also be an online artist in residence at Lungs Project—based in the U.K.—as part of the Creative Incubator Program, and at Electrocities with libi rose strigel as Sharing Turtle in Sydney, Australia, which will culminate in an onsite exhibition at Electrofringe. Her book, Entering the Blobosphere: A Musing on Blobs, will be released on June 17, and will be published by Civil Coping Mechanisms / The Accomplices.

PhD student libi striegl has recently been producing variations of her Take it Apart(y), Security & Privacy, AlterNETworking, Why We Share and DeTechs workshops in different spaces across campus—including at the CRDDS in Norlin Library, the Thornton Anythink Library and the BTU Lab—and in various classes—including Neurohacking and Intro to Media Studies. Her collaboration with PhD student Laura Kim, Sharing Turtle, was selected for an online residency through the Austin Museum of Human Achievement’s WELCOME TO MY HOMEPAGE program. Sharing Turtle also exhibited the interactive piece, Prairie Dog Companion, at The Art of Data show at the Boulder Public Library. In late summer, the duo will participate in an ElectroCities digital residency.

striegl also took part in the third iteration of the EcoDH roundtable at the University of Maryland's Maryland Institute for Technology in the “Humanities Dialogues” series with Amanda Starling Gould, Ted Dawson, Max Symuleski and Craig Dietrich. She recently spoke at the Lafayette Electronic Arts Festival on the Media Archaeology Lab as a space for art making, and facilitated a breakout session on the history of women in computer science at the ARTHYVE Art + Feminism Wikipedia Edit-A-Thon. Her article, "An Archive as Technique in the Media Archaeology Lab | Building a One Laptop Per Child Mesh Network," co-authored with Associate Professor Lori Emerson, was published in the inaugural issue of the International Journal of Digital Humanities. She will soon co-facilitate a workshop, along with Alison Sheldon from the University of Kansas, at the Museum of Contemporary Art Denver’s FemFest, titled LOL Weaving, on the interrelated histories of computing and textile arts. In July, she will participate in the fourth iteration of the EcocriticalDH roundtable at the Association for Computers and the Humanities conference. 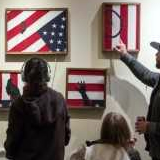 In March, PhD student Angie Eng’s live audio-visual performance Oculus Rising—with College of Music PhD student Sean Winters—was performed at the LEAF festival in Lafayette. Her work was also included in the group exhibitions Extra-Ordinaires in Belleville, Paris, and Touch at The Dairy Arts Center, where she featured two new works: This Land is My Land and Magnetizing Mandala. In Magnetizing Mandala, Eng arranges electronic waste into mandala patterns so that we can contemplate our participation in digital consumption. In This Land is My Land—for which she selected 12 renowned American poets of diverse backgrounds to collaborate—Eng explores what it is to be American through multiple poetic perspectives. The viewer’s touch on the electronic painting triggers the recitation of a poem to commence.

PhD student Maya Livio submitted a paper co-authored with Associate Professor Lori Emerson, titled "From Feminist Labs to Feminist Logistics: Provocations for Collective Sites of Thinking and Doing,” for the book Critical Makers Reader (Institute of Network Cultures). She presented her paper, “A Rough Sketch on Thermoregulation, Technology, and the American Pika,” at the Multispecies Storytelling Conference at Linnaeus University in Växjö, Sweden. 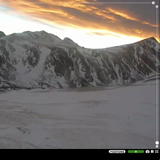 She curated the annual media arts festival MediaLive at the Boulder Museum of Contemporary Art for her fourth year. This year’s festival included two new works she commissioned, as well as installations and events by 10 international artists and presenters. She also co-organized the What is a Feminist Lab? symposium and organized the Anthropocene Resonance symposium, both at CU Boulder, and programmed 16 resident researchers and practitioners at the Media Archaeology Lab. She gave an invited talk, titled “Contemporary Critiques of Networked Technology through Media Art,” at Front Range Community College, designed and led a GTP workshop titled Feminist Pedagogy, had two projects presented in exhibitions curated by NEST, and co-organized her sixth Art+Feminism Wikipedia edit-a-thon.

Livio wrote and was awarded eight grants—three as Co-PI with Associate Professor Lori Emerson, including RIO's Innovative Seed Grant; four as Co-PI with Emerson and Professor Thea Lindquist; and a Graduate School Travel Grant. She received press mentions in The Daily Camera, CU Independent, CU Boulder Today and Westword. Most importantly, she cared for her companion cat of 15 years as he passed from a brain tumor.