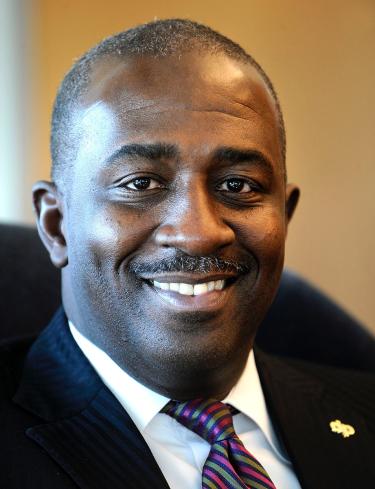 Former longtime Denver Post Editor-in-Chief Greg Moore will join the University of Colorado Boulder for the fall semester as a Hearst Visiting Professor of Professional Practice to teach a seminar at the College of Media, Communication and Information (CMCI).

“Greg Moore is one of the most esteemed editors in American journalism and we are extremely honored that he has chosen to share his considerable talents with our students,” said CMCI Founding Dean Lori Bergen. “Given Greg’s encyclopedic knowledge of newspaper journalism, his leadership skills and his effervescent personality, he’s sure to become an instant favorite with our students.”

Moore established a strong reputation for upholding a high standard in breaking news and public service journalism during his 14 years at The Denver Post and 16 years at The Boston Globe.

During his time at The Denver Post, the newsroom earned four Pulitzer Prizes, including one for breaking news coverage of the tragic Aurora Theater shooting. He also directed coverage for the historic 2008 Democratic National Convention in Denver and oversaw many other high-profile stories.

A multi-part series examining deficiencies in Colorado's welfare system, titled “Failed to Death,” resulted in numerous reforms to improve the state's system. A series in 2012 on the growing problem of heroin in Denver was a harbinger of the explosion in heroin deaths across the nation that today has resulted in government spending to halt the epidemic.

A veteran of breaking news, Moore helped direct coverage of The Boston Globe’s Sept. 11, 2001, terror attack and supervised coverage of Nelson Mandela's historic visit to Boston in 1990 shortly after his release from a South Africa prison.

Other notable work during his time at The Boston Globe include helping launch the investigation of pedophile priests in the Catholic Church that resulted in the 2003 Pulitzer Prize for Public Service and was later memorialized in the Oscar-winning movie, Spotlight. Moore also supervised coverage of the Charles Stuart murder case in 1989 that revealed the tender underbelly of race relations in Boston after a suburban white man falsely accused a black intruder of killing his pregnant wife. Months later the man committed suicide after his own brother revealed the husband plotted and carried out the murder.

“I’m delighted to have someone of Greg Moore’s stature and experience join us,” said Paul Voakes, chair of the journalism department. “Journalists and educators alike are struggling to understand how journalism can emerge from its current turmoil, and no one has greater insights ‘from the inside’ than Greg Moore.”

About the Hearst Professional-in-Residence Program

The Hearst Professional-in-Residence program provides fellowships for professionals to visit CU-Boulder each semester and provide helpful lessons and advice to students and faculty. Its purpose is to introduce nationally known, accomplished professionals to our students to enrich their studies.

The program is funded by the William Randolph Hearst Foundation.