Jonny Waldman won the 2016 Colorado Book Award in the general nonfiction category for his book Rust: The Longest War, which explores oxidation, its effects—costing the United States $400 billion each year—and the people who fight against it.

Waldman’s inspiration for Rust came while living aboard and repairing a 40-foot sailboat in San Francisco. “We were learning kind of the hard way that you have to buy all this stainless steel stuff because you’re gonna be in saltwater,” Waldman said. Impressed by the sheer amount of damage caused by rust—and the many differing opinions he heard on how to combat the problem—the journalist realized he had found a promising subject for his first book. 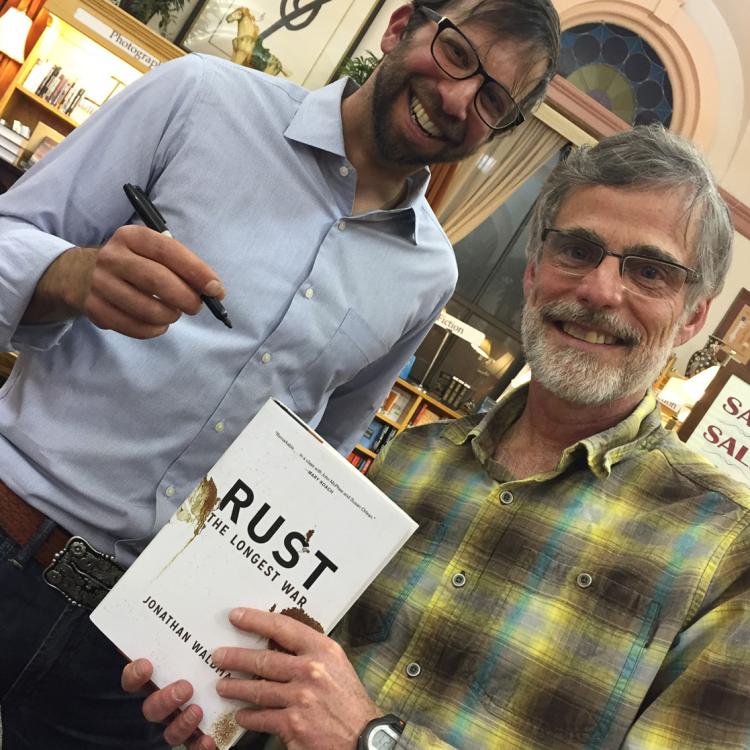 Waldman and Yulsman pose at a book signing for Rust.

In 2010, the Ted Scripps Fellowship at CU-Boulder’s Center for Environmental Journalism (CEJ) gave Waldman an opportunity to develop his idea further. “I recall scratching my head when I first heard of the idea,” said CEJ director Tom Yulsman, “but when Waldman fully explained it to me, I became infected by the same enthusiasm he had for the topic.”

With a nine-month stipend and access to CU classes and library archives, Waldman dove into the intricacies of rust. He took courses on mining law and water chemistry, discussed environmental writing with other Scripps fellows and checked out so many books from the interlibrary loan that CU librarians asked him to limit his use of the system. (Those librarians earned mention in the acknowledgements of Rust.) By the end of his fellowship, Waldman had written a book proposal and the first chapter.

“You know they always say when you write a book, you don’t want the book to be a hundred percent of what you know,” Waldman said. “You want to know a lot more than what's in the book so I did that.”

The result is a book that, as a review in The New York Times stated, succeeds in taking “a seemingly drab subject and making it pop through simple, stubborn attention to personality and detail….”

For Waldman, the Scripps Fellowship was an important part of that success. “I went into the fellowship working on other people’s deadlines,” he says. “It gave me nine months of time to focus on story, enough to really figure it out forwards and backwards.”

Yulsman, who keeps in touch with Waldman, was proud to see Rust win acclaim. “Now, the Colorado Book Awards program has recognized just how engaging this subject can be—when reported and written by an incredibly skilled journalist like Waldman.”

Read an excerpt of Rust: The Longest War on Waldman’s website.