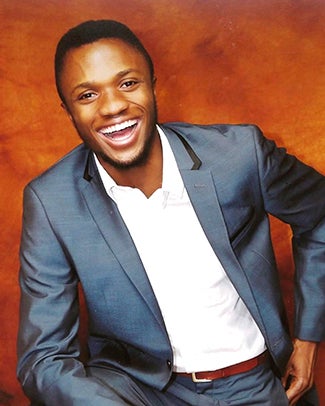 Wisdom Amouzou looked nervously at the clock. It was almost 10:20 am. Clustered around him were his eighth grade students. He asked them again if they were sure they wanted to do this. They did. Amouzou had discussed civil disobedience with them for weeks. As their teacher, there was a chance he’d be held responsible if their plan went wrong.

At 10:20 a.m. his students—and many in nearby schools—walked out of class and gathered at a Denver park to protest the killing of Michael Brown in Ferguson, Mo. In the following weeks, student discussed their concerns with law enforcement and school officials in community meetings. “Actual people from their community were listening to their voices,” Amouzou says.

“Have a critical eye toward everything you do.”

Amouzou’s family came to the United States from Togo when he was a child. Like many children of immigrants, he felt a responsibility to find a career where he’d make good money. But two years into his engineering degree at CU, he felt a strong calling to become a teacher. He switched his major to communication, where he learned how powerful human bias can be, and learned to analyze persuasive speech and writing. A key lesson, he says, was “have a critical eye toward everything you do.”

As he studied, Amouzou realized that a successful education must give students the voice to advocate for their communities. After graduation, he joined the Teach for America program and was assigned to a Denver school where he asked students what they wanted to change where they lived. After studying the Black Lives Matter movement, they suggested the Michael Brown protest.

Today, Amouzou teaches at a prestigious international school in South Africa. He is also a co-founder of a the HackSchool project, which seeks to accelerate student learning by giving students the high-tech tools and mentors they need to tackle real problems in their community. So far, Amouzou’s HackSchool team has secured initial funding for the project and is providing 3D printers and video equipment to high school students in Denver.

In this latest endeavor, Amouzou has also found use for communication. “As we're crafting our pitches for the next round of funding,” he explains, “the narratives we frame and tell are significant to our success and ability to get stakeholders invested.” He hopes to eventually bring the HackSchool model to Africa, too.

Learn more about Amouzou on his education blog, Street Knowledge.

In 2017, Amouzou and co-founder Nathan Pai Schmitt were recognized by Teach For America as Social Innovation Award winners for their Denver-based HadaNõu Collective (HNC). The HadaNõu Collective creates centers and schools where students are solving real world problems. They received $50,000 to continue developing and expanding their reach.

Some 183 teams from around the country applied to be considered for Teach for America’s annual Social Innovation Awards this year, the largest application pool in the award’s six-year history. A panel of 12 judges (including alumni entrepreneurs, philanthropists, venture capitalists and members of Teach For America’s executive team) heard pitches from each finalist, met with finalists in small-group interviews, and made the winning selections. Judges, compelled by The HadaNõu Collective’s focus on student agency and deep learning, called the venture a “big idea” to both empower long-standing public schools to drive their own innovation, while also creating new public schools through HNC.