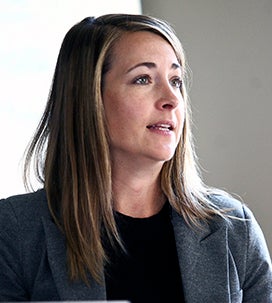 Kelly Graziadei had a lot going on in her life when Facebook offered her a job. But she just couldn’t turn down the company that started the social media revolution.

“Facebook was a rocket ship and I wanted to get on it,” she explains.

When you absentmindedly whip out your phone and scroll through Facebook or Instagram, you probably think you’re just killing time. But Graziadei knows something much bigger is going on. Since 2013, Americans have spent more time on their phones and computers than in front of the TV. “A media shift like this hasn’t happened since the 1950s, when TV overtook print,” she explains. “Social media is now mainstream media."

As director of global marketing solutions at Facebook, Graziadei’s job is to figure out how advertisers can best use social media. Traditionally, advertising was simply about reaching the highest possible number of people. With social media advertisers can target their messages to the most likely buyers. “We want advertising to be as good as what your friends post on your Facebook feed,” says Graziadei, who sometimes drops into advertising classes by Skype to share her knowledge with CMCI students.

Graziadei didn’t plan on a career in technology when she left CU in 1997, but when a telecommunications company offered a job with a nice title and a good paycheck, she took it.

It didn’t work out the way she planned. “Fast forward a few months in and I found myself in a call center playing the tambourine to greet employees off the elevator in the morning … all in the name of selling Caller ID,” she recalls.

She quit that job and worked her way through a variety of increasingly high-profile companies, including time at Yahoo, before she landed at Facebook.

“I love the opportunity to build something new,” she says. “To be in an industry where so much hasn’t been done before.”