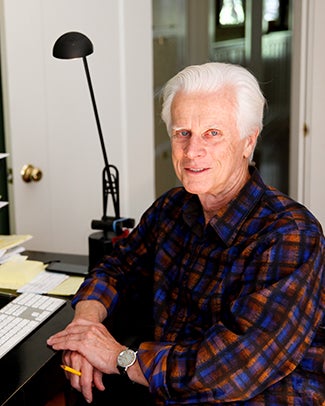 “I’m not the kind of professor who likes to make clones,” Bill Nichols says about his teaching style.

Students, though, can be forgiven if they are eager to follow in his footsteps. Nichols, as a grad student in the 1970s, was part of the birth of modern film studies and literally wrote the book on documentary film studies. He’s taught film classes for decades and not only mentors students, but also professional documentary filmmakers.

“Documentaries get us to think and feel about something in an accessible way.”

Now, as a visiting professor in the Department of Critical Media Practices, he’s excited to be part of one of the nation’s first academic programs centered around documentaries and storytelling.  “It’s a chance to use what has become my focal point to help build and launch a new program,” he explains. As the Department of Critical Media Practices grows, he predicts, student work will be the program’s calling card.” And that’s why Nichols is excited: his favorite part of teaching film is helping students discover their own voice and perspective.

Nichols has studied film since the 1960s when, as a graduate student interested in political issues, he was drawn to the political dimension of documentaries. “The documentaries in the ‘60s that were about political issues, about Vietnam, about the draft, about liberation struggles, about Cuba, were like ‘oh my God, I didn’t know film could do this,’ because I’d never seen anything like it before,” he remembers.

In 1991, he pioneered documentary film studies with Representing Reality, the first book to apply film studies methods to documentary films. Today he continues to teach, serve on film festival juries and advise filmmakers. He appreciates that documentaries—even while using the same entertaining elements as fiction films—don’t just entertain audiences, “but get us to think and feel about something in an accessible way.”