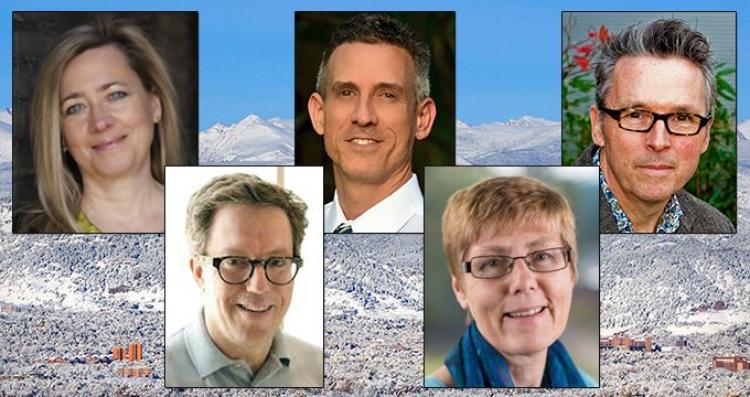 University of Colorado Boulder Provost Russell L. Moore today announced the five finalists selected for the position of dean of the College of Media, Communication and Information.

“All preparations are on track to welcome the first class into the new College of Media, Communication and Information next fall and hiring a visionary dean marks the next critical step,” Moore said. “I thank the committee and its chair, Dean Anne Heinz, for forwarding five excellent candidates to visit campus.”

The finalists for the position are: Lori Bergen, dean of the J. William and Mary Diederich College of Communication, Marquette University in Milwaukee; Thomas Finholt, senior associate dean for academic affairs and professor in the School of Information, University of Michigan; Eric Freedman, dean, James L. Knight School of Communication, Queens University of Charlotte in North Carolina; Caroline Haythornthwaite, director and professor, School of Library, Archival and Information Studies, The iSchool at the University of British Columbia; and Jonathan Potter, dean of School of Social, Political and Geographical Sciences, Loughborough University, Leicestershire, United Kingdom.

“The search committee received over 50 applications for the founding dean position,” said Heinz, dean of Continuing Education and chair of the search committee. “Through their thoughtful deliberation, the committee identified five finalists after reviewing candidates' materials and conducting video conference interviews. We are delighted that our pool of finalists reflect a range of disciplines and experiences important to advancing the work of the college.”

Public sessions with the candidates will be held on the following schedule:

Bergen joined Marquette in 2009 after serving as director of the School of Journalism and Mass Communication at Texas State University, as associate director of the A.Q. Miller School of Journalism and Mass Communications at Kansas State University, and as a faculty member at Southwest Texas State and Wichita State universities earlier in her career. At Marquette, Bergen spearheaded innovative academic initiatives that include the O’Brien Fellowship in Public Service Journalism and the Milwaukee Neighborhood News Service. During her tenure as dean, the Diederich College has received over $20 million in support for student scholarships and other initiatives. Bergen has a bachelor’s degree in history and political science and a master’s degree in journalism from Kansas State University, and a doctorate in mass communication with a minor in organizational behavior from Indiana University-Bloomington.

Finholt has been the senior associate dean for academic affairs at the University of Michigan since 2012 and he has served in numerous other faculty and leadership positions at the university since 1991. From July to December 2013, he was the acting dean of the School of Information. In his current role as senior associate dean he has directed the launch of two new degree programs, including the School of Information’s first undergraduate degree and also led the most significant faculty expansion in the school’s history. Finholt’s research focuses on the design, deployment, and use of cyberinfrastructure in science and engineering and was recently the principal investigator on a National Science Foundation-funded project exploring the energy cost of social media use. Finholt earned his bachelor’s degree in history from Swarthmore College and his doctorate in social and decision sciences from Carnegie Mellon University.

Freedman joined Queens University of Charlotte as dean of the James L. Knight School of Communication in 2012. Prior to his appointment at Queens, Freedman was assistant dean of the Dorothy F. Schmidt College of Arts and Letters at Florida Atlantic University. There he also served as associate director of the School of Communication and Multimedia Studies in a career spanning more than 15 years in the State University System of Florida. His academic experience also includes an appointment at Duke University where he served as a faculty member and founding director of the Duke in Los Angeles Program. Freedman has a bachelor’s degree in art history from Cornell University and a master’s degree in art history and doctorate from the School of Cinematic Arts, both at the University of Southern California.

Haythornthwaite joined the University of British Columbia in 2010 after 14 years at the University of Illinois at Urbana-Champaign and 10 years in the computing industry. She has an international reputation in research on information and knowledge sharing from a social network analysis perspective, and the impact of computer media and the Internet on work, learning and social interaction. In 2009-10 she was the Leverhulme Trust Visiting Professor at the Institute of Education, University of London, presenting and writing on learning networks, which resulted in the publication of E-learning Theory and Practice.

The University of Colorado Board of Regents approved the College of Media, Communication and Information in June of 2014. The college is now accepting applications and will offer classes for new degrees starting in the fall semester.

Christopher Braider, who oversaw the effort to create the new college, is serving as the transitional dean for the 2014-15 academic year.