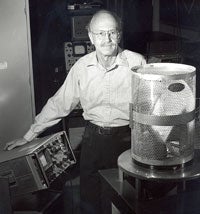 This page is dedicated to Professor Raul A. Stern, who passed away following a long illness on June 22, 2008. Professor Stern came to the university in 1978 and was a valued member of the University of Colorado Boulder community. His contributions spanned departments. In his time at our campus we benefitted from his research, professorship, and mentorship.

He was born on December 26, 1928 in Bucharest, Romania and died on June 22, 2008. Professor Stern attended the University of Wisconsin-Madison and earned a B.S. as well as an M.S. in 1952 and 1953. Later, he earned his Ph.D. in 1959 from the University of California, Berkely in Aeronautical Sciences. Professor Stern, an expert in plasma physics, was hired jointly into the Departments of Astrogeophysics and Physics in 1978. He continued as a member of the Department of Astrophysical, Planetary and Atmospheric Sciences during its existence (1982-1996). From 1996 to his retirement he was a fellow of the Center for Integrated Plasma Studies as well as a member of the Department of Physics.

Professor Stern was highly invested in the broader plasma science community and served outside of CU-Boulder at institutions such as the California Institute of Technology as a Sherman Fairchild Fellow, the Ciba-Geigy Research Lab in Zürich, Switzerland, and the Institute of Plasma and Fusion Research at UCLA. In addition, Professor Stern devoted time to mentoring young scientists and helped launch many successful careers.

Professor Stern's research included wave and shock propagation, nonlinear properties, instabilities, transport, turbulence, stochastic processes, plasma diagnostics, and negative ion plasmas. He collaborated with many groups outside of Colorado, including: the Physics Department at the University of California, Irvine; Physics Division and Meson Physics Division at the Los Alamos National Laboratory; Center for Research in Plasma Physics at the École Polytechnique in Palaiseau, France; Applied Physics Department at the California Institute of Technology; Physics Department at UCLA; and the Plasma Turbulence Group at the Université de Provence.

The Center for Integrated Plasma Studies is grateful to have had Professor Stern as one of our members. His passion for plasma physics research lives on through the efforts of our dedicated faculty and staff.