Melissa Bailey focuses on the intersection of climate change and health. She has been reporting on health care for the past seven years, most recently as a freelance journalist. Her work has appeared in The New York Times, The Washington Post, The Atlantic, NPR and other publications. 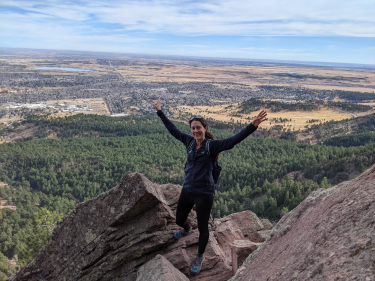 She started her career in community journalism, spending eight years at the New Haven Independent, a startup that became a national leader in online-only, not-for-profit local news. She was a 2015 Nieman Journalism Fellow at Harvard. After that, she reported for STAT, a health and science publication affiliated with the Boston Globe. She spent three years on the investigative team at Kaiser Health News, digging into lapses in hospice care, suicide in nursing homes and the role of dementia in gun violence. She holds a B.A. in mathematics from Yale University.

Melissa sat down with CEJ graduate research assistant Samuel Bowlin to talk about her work and life.

I was a math major at Yale, though I always wanted to be a writer. I just loved math. I thought about becoming a math professor, but I decided I wanted a career that was more connected to civic life, to community. I took an internship at the alternative weekly paper in New Haven [Connecticut] right after graduation. I didn't have any training in journalism. I just learned on the job as a local news reporter for the next ten years. I left New Haven in 2014 to do a Nieman Fellowship at Harvard. Just as I was finishing, the Boston Globe's parent company was starting a new national health and science outlet, STAT, and I got hired to cover Boston's medical district. That got me hooked on the health and science beat. I've been covering health and science for the past seven years, including several years on the investigative team at Kaiser Health News, a nonprofit health news service.

I became interested in this growing field of inquiry into the impact of climate change on health, but I didn't have much training or experience reporting on environmental issues. So I started looking around for training in this area, and that's when I stumbled across the Scripps Fellowship.

I would imagine your previous beat, death and dying, could be a really tough topic to cover. Did you ever get burnt out from your work?

It certainly got bleak at times. I worked on a story about suicide in nursing homes, which entailed six months of looking at inspection reports and cold-calling families to talk about these deaths. So yes, it got pretty heavy at times. But I found that a lot of people really wanted to talk about their loved ones, and it can be quite cathartic. It can actually be a positive experience for them when the story gives them a chance to say that their loved one’s life mattered. That can be uplifting to me and to whomever I’m interviewing as well.

What have you been working on during the fellowship?

For my project, I’m writing a series of stories on the impact of climate change on health. I’ve published three so far. One was about some solutions in this area, one was an interview with a Zen priest who's also a climate scientist, and the third was about how climate change is expected to influence the spread of West Nile virus.

Unexpectedly, I spent much of the first semester doing academic research with a professor at the public health school. Our goal was to see how air pollution may be affecting birth outcomes in Colorado. I got to see how science works from the inside. That was an amazing thing to be part of, and something I would never have gotten to spend time on if I were in a newsroom or working full-time. To get to do something like that as part of this fellowship was such a wonderful gift.

How have your other experiences with the fellowship been?

It has been a wonderful opportunity to step back from deadlines and get to be a total beginner and learn new skills. I learned to code in R for statistical analysis, which is super helpful with understanding health or science research. I also took an audio reporting class. I had an audio story published in NPR's Science Friday, which was super exciting for me. Now I'm working on a photojournalism project that's challenging me to think in new ways.

Well, one of the wonderful things about living in Colorado was I got to learn how to backcountry ski. I took an avalanche safety course and got to learn all about snow science. I have been out, gosh, maybe 17 days this season?

I've been skiing since I was three years old, but I've never done the whole backcountry thing. It's just been an incredible way to see the state and learn a new skill. So yeah, it was a real highlight of the year.

Boulder is the perfect place to be a climate reporter, for better or worse. In my first week here, there was a heat wave, an Ozone alert day, and a flash flood warning that was linked to past wildfires. I didn't have much experience with those, so it was a quick primer in our changing climate. Later we had a ton of wildfire smoke, and of course a catastrophic fire in December. Coming from the East, those are events that you hear happening elsewhere. These phenomena can obviously be worse in other places, but the signs of climate change feel really present here.

Despite all that, Boulder is still a beautiful place to live. It’s close to amazing hiking, and I love how bikeable it is. And I think the most surprising thing for me about Boulder was the sheer abundance of fruit trees on the streets. Finding apples and pears and even peaches and plums in town has been so enjoyable. I just had no idea that there would be fruit teeming from regular street trees.