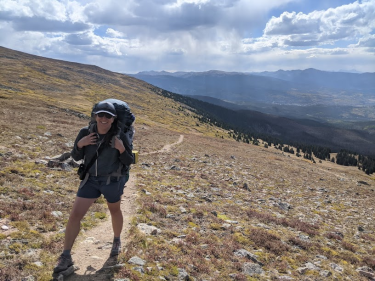 Marissa Ortega-Welch is an award-winning radio and print journalist based in Oakland, California. Most recently, she was the science reporter for KALW Public Radio in San Francisco. Her work has been featured on outlets such as NPR, Latino USA, Reveal, and The California Report. In addition to reporting, she has taught radio journalism to high school students, career-changing professionals, and adults incarcerated at California state prisons. She made the career-change to journalism after working for a decade in the environmental education and science fields. During her Scripps fellowship, she’s working on a series about the history and management of wilderness areas on public lands in the West.

Marissa sat down with CEJ graduate research assistant Samuel Bowlin to talk about her work and life.

I went on this backpacking trip for young women when I was in high school—which rocked my world—so I wanted to work for the organization that had led that trip. It was a big quality-of-life decision because I just wanted to be outside living that kind of lifestyle, and I really cared about the environment. Then, that led me into environmental education out of college because I really enjoyed teaching as well. I ended up working in the environmental education and science fields for about a decade.

My transition into journalism started through internships with local public radio stations. There was a radio station in Berkeley that had a six-week crash course on how to do audio journalism in exchange for volunteering for the station one day a week, which was a very trial by fire process, but you just learn so quickly that way. From there, I applied for other internships and fellowships and used those as a ladder to move into the industry.

Coming from conservation work, how steep was the learning curve while you transitioned into journalism? Was it difficult to find your voice?

I think I’m still learning. I feel like when you're new to journalism, it can feel like you’re just supposed to recite back the facts as you’ve learned them and not have a point of view, almost as if that’s the easiest way to interpret the code of ethics that you're supposedly held to.

But as I get more comfortable in this field, I’m realizing that it’s okay to have a point of view. That’s not to say that I think journalists should be biased, but our role is often to do all this research that the average person doesn't have the time to do, and then come away with some takeaways on the subject matter. I’m learning to trust my own voice and when necessary, advance an argument. That’s actually been something that’s been helpful to think about while at a university, because academia is all about staking claims and advancing arguments.

What are you working on during the fellowship?

I'm creating a podcast about our changing relationship to wilderness. As a radio reporter and avid backpacker, I got interested in the subject when I noticed the huge increase in the number of people coming into wilderness areas and backpacking over the last five or ten years, and they’re bringing their phones with them. I think phones and the internet empower people that maybe otherwise wouldn't feel comfortable wandering off into the woods to get out there, and it’s also led to a different experience than what I had when I first started backpacking. The increase in visitation also has a lot of environmentalists worried that we’re “loving nature to death” but as a former environmental educator I felt like, “Isn’t this what we wanted: for more people to get outdoors?”

Interrogating my own feelings around this got me curious about the history of wilderness areas and the act of Congress which set aside these lands. This idea that we set aside pristine nature is a myth, right? Because wilderness areas and public lands were all expropriated from tribes in the beginning, who had often been managing the land for a long time. So, we've set aside the thing that we designate as wilderness, and we get in our cars and drive to it to experience it, and it's beautiful and I love it and it’s incredibly important that we protect it. I don't want it to go away, but I think that there are some real assumptions and values behind it all that deserve looking into, and reveal how we think about our relationship to nature overall.

How has your experience with the fellowship been so far?

Getting to take classes as an auditor is amazing, because you have the power to really pick and choose what you want to learn and spend time on. It’s also been a luxury to be able to call people doing research related to what I’m working on and tell them I’m a Scripps Fellow. In this region, that seems like it’s opened some doors because people know the fellowship well.  And it’s wonderful to go on field trips and speak to people and see places you wouldn’t normally have access to.

Part of the reason I’m here is to take those trips, which have been just as educational to me as the research I’m doing.  As someone who's lived and worked up and down the West Coast, it has been really enlightening to live in Colorado and experience what the Mountain West is like and see this region’s version of issues we also grapple with on the West Coast. I knew when I applied for the fellowship that being in Colorado would be helpful to the kind of reporting I do, but I’ve been blown away by how many of the country’s foremost thinkers and practitioners on public land issues are located in the Front Range or very nearby.

I am from the Bay Area, which is itself an amazing place. But the fact that I can drive 45 minutes and hike in wilderness here is incredible. Boulder has that over everywhere else, it seems. And the fact that I can bike along the bike path and go swimming in a creek right in town is also amazing. It’s a very dreamy place to live.

What have been your proudest moments in journalism?

In addition to reporting, I’ve been the manager for my station’s radio training programs for the last four years. I get to help other people make a career change to journalism like I did, and that’s been so satisfying. For the last three years running, the “Best Radio Feature” award from our region’s Society of Professional Journalists chapter has gone to people who came out of our training programs. Alum have gone on to work at public radio stations and podcasts across the country. I think fellowships like the one I’ve run and the Scripps fellowship are invaluable tools to help journalists move forward in their career, at whatever stage they’re in, so it feels great to get to be on both sides of that.