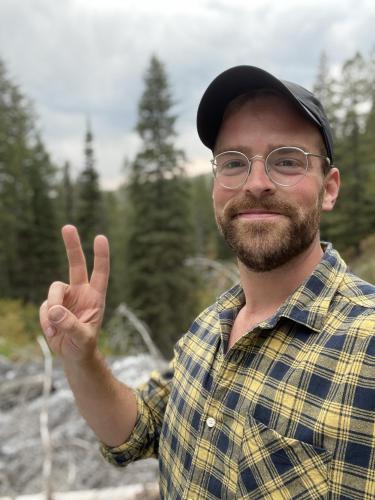 Luke Runyon reports on water and climate in the Western U.S. Prior to the fellowship he built a collaborative reporting project focused on the Colorado River watershed, based at NPR member station KUNC in northern Colorado. Luke has also reported for Harvest Public Media, Aspen Public Radio and Illinois Public Radio. He currently serves on the board of the Society of Environmental Journalists.

He is relocating to Grand Junction, Colorado  with his husband after the fellowship, where he plans to spend his time exploring rivers, valleys and mountain peaks in the central Rocky Mountains and Colorado Plateau.

Luke sat down with CEJ graduate research assistant Samuel Bowlin to talk about his work and life.

I really got started covering environmental issues as an agriculture reporter for a project called Harvest Public Media. If you’re covering farming and ranching in Colorado, you inevitably run into water scarcity issues because the availability of water is so fundamental to how agriculture is done in the West. I really wanted to explore it further. So, when the station I was working for, KUNC, received a grant to report on the Colorado River Basin and cover it as a beat, I jumped at the opportunity. In those four years before the fellowship, I got to focus on the Colorado River and develop a real deep knowledge of the issues it’s facing.

How can coverage of Western water scarcity be better?

The stakes have risen dramatically in just the last few years. Headlines about the West’s water problems are growing more dire. The supply and demand imbalance is getting worse. As the situation on the ground gets worse, people start paying attention more. As I started reporting on the bureaucratic, often complex issues around water scarcity, I found there’s an audience with an appetite to know why the problem is getting worse, and they want to hear more about solutions. They’re not scared off by the complexity if it’s presented in a relatable way. But to get to that point, where we’re talking about solutions, it’s important for people to understand the West’s political landscape around water. You need lots of background on the people involved, and their interests. There isn’t one agency or institution pulling the strings. It’s a bunch of varied interests across the region, both formal and informal, who have a stake in the Colorado River. Obviously, it won’t be just one little corner of the watershed that figures it all out—it’s going to be this whole ecosystem of people, agencies and institutions working on it. Once you understand the players, their motivations, their fears, their visions for the future, and how they work together, you can let that inform your reporting and get way deeper than just telling your audience that there’s not enough water to go around.

What have you been working on during the fellowship?

My project is focused on the 100-year anniversary of the Colorado River Compact—which is coming up this November—and I’ve started reporting for a limited-run audio series looking at the solutions to water scarcity issues in the Colorado River Basin. I feel like there is plenty of literature on the compact’s history, so rather than rehashing all of that, I’m focusing on discussing how we get out of the problem that we’ve created. I’ll be looking more toward the future.

In the West, we’ve gotten used to having it all. Consumers usually get what they want, and few of us have had to actually change the way we’re living and our relationship to water. But that era I think is coming to a close, and ultimately everyone is going to have to change how they view their relationship to water—some in profound, fundamental ways, others in smaller, more nuanced ways.

I’ll be delving into concepts like demand management and broader questions about tribal water use. I hope to avoid some of the doom and gloom framing, because pessimism around our ability to adapt to scarcity is something I think people tire of pretty quickly. What I’m most interested in is addressing how we as residents of the West can create policy to lessen our reliance on the Colorado River and do so in a way that feels equitable and fair, and question if that’s even possible.

How has the fellowship helped you so far?

I think the best thing has been a change of pace. Being a beat reporter, I’m always hustling to cover the topic the best that I can, so I’m usually trying so hard to stay on top of things, get scoops, and develop long-term relationships with sources. And the Colorado River watershed is huge, so I would travel quite a bit. Being a part of the fellowship has been such a nice change of pace because I’ve been able to take a breather from the demands of daily reporting. I don’t feel like I need to be on top of every little thing, and developments in the beat can happen without me being the one reporting on them right away. Don’t get me wrong—I still love and miss reporting, but slowing down has been really nice.

Being at the university has been lovely too. It’s such a beautiful campus. There is so much going on, with top researchers and experts in almost everything that you would ever want to know about, and they're right at your fingertips. You don’t have that as a journalist very often. If anything, you're constantly chasing people. The fellowship has such a good reputation around campus, and I felt that when I would introduce myself as a Scripps Fellow. It's great to be part of something that people think highly of.

During the fellowship I tried to get outside as much as possible. There's so much to explore, and the flexible schedule gave me more opportunity to do that. I like to go backpacking in the summertime and cross-country skiing in the wintertime. There were a couple big snowstorms in Boulder that me and the other fellows took advantage of and went skiing through town. I also love to bake, but I often end up baking more than I should probably eat. So it's been really nice to have the fellows around, because I can offload my baked goods on everybody else. That’s going to be a challenge for me after the fellowship—I’ll either need to slow down my baking or just get used to eating a lot more.