Anna V. Smith writes and edits from the Pacific Northwest and Boulder, Colorado. Before the fellowship, she worked as assistant editor on the Indigenous Affairs Desk at High Country News, a regional magazine that covers the people and places of the Western U.S. She’s covered stories on Indigenous land rights and repatriation, the suppression of the Native vote, and Indigenous immigrants navigating language barriers around COVID-19. She’s won awards from the Native American Journalists Association, including Best Coverage of Native America, and has also freelanced for publications like Slate, Audubon and The New York Times.

Anna sat down with CEJ graduate research assistant Samuel Bowlin to talk about her work and life. 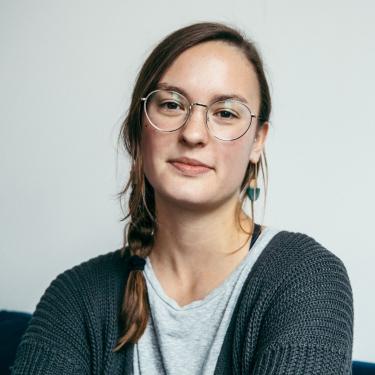 How did you get your start in journalism?

I started doing journalism when I was in high school because I always wanted to write and I really loved to read, and journalism felt like my way into that. I started in local news and worked my way into magazine journalism, where I am now. And I was lucky—I could not have asked for better mentors in my journalism career. I think the biggest thing that I can attribute to any success I’ve had is mentorship.

What have been your proudest moments in journalism?

I think the proudest moments happen when I finish a story and hear back from the people that I included in that story. Oftentimes they hadn’t seen themselves or their tribal nation represented in that way before, or been given that much space to tell their story. In 2019 I wrote a story about a smaller tribal nation who was successful in getting the U.S. to return some lands back to them, which generated little to no national coverage. The tribe ended up ordering 250 copies of the magazine with the story in it to distribute to their citizens and keep in their archives. The relationship between many tribal nations and the media is an old and often negative one. So it feels good to strive to improve that relationship, even if it’s just one story at a time.

You're great at taking a step back and admitting when it's not your place to comment on topics in Indigenous affairs. How'd you learn that skill?

Early on, I learned the importance of asking myself, “Am I the right person to be telling this story?” Undergraduate journalism schools don't always teach journalists about their limits, what stories aren’t theirs to tell, and on a broader society-level scale many (white) people think that everything is theirs to read, to tell, to consume, to buy, or to sell, and oftentimes without a great sense of responsibility.

I think acknowledging that question makes room for other people who are better positioned to tell the story. Journalism can feel very independent and very individualized, which incentivizes you to jump from publication to publication or focus on awards and accolades. But we should be viewing journalism as a much more collective effort. That means locating yourself, and figuring out what role you play in the larger media ecosystem. On the Indigenous Affairs Desk, we’ve always talked about how—as journalists—our goal shouldn’t be to write about Indigenous people, but to write for Indigenous people. It sounds like a subtle shift, but the end result is meaningfully visible in the stories we tell.

How has the Scripps Fellowship helped you so far?

There has been no pressure to “produce,” and that’s been lovely. It’s nice to have someone recognize the work I’ve done and tell me it’s okay to take a breath, which is what the Scripps Fellowship has felt like. Although in my full-time job I don’t have the burden of writing five stories a day or something like that, it is taxing over the long term to delve deeply into people’s lives or complex, long-running legal issues, and to take on the responsibility of getting it right, especially during a pandemic or such a historic “unprecedented” year like 2020.

During the Scripps Fellowship I've focused on classes on media theory and Indigenous studies, and it’s been incredible to get to learn for the sake of it. The idea behind the project I'm developing is an open-access tool for journalists and others as a means to find and include a more diverse set of Indigenous voices and perspectives in their work, ranging from community organizers to legal experts. There's a lot of nuance to take into consideration for such a project, which will be heavily shaped by input from collaborators over time.

What's your favorite thing to do outside of journalism?

Right now, my favorite thing to do outside of journalism is to work with paints and textiles, specifically via quilting and natural dyes. I first learned how to quilt in high school from my mom—quilting runs in the family—but I've only recently begun exploring quilting as an art form with history. Both quilting and journalism hold memory and story, often whole generations worth, and both take time to get right, one stitch or word at a time. So much of my work is writing and editing, so it feels good to make something with my hands and use a part of my brain entirely concerned with color, shape, and aesthetic.