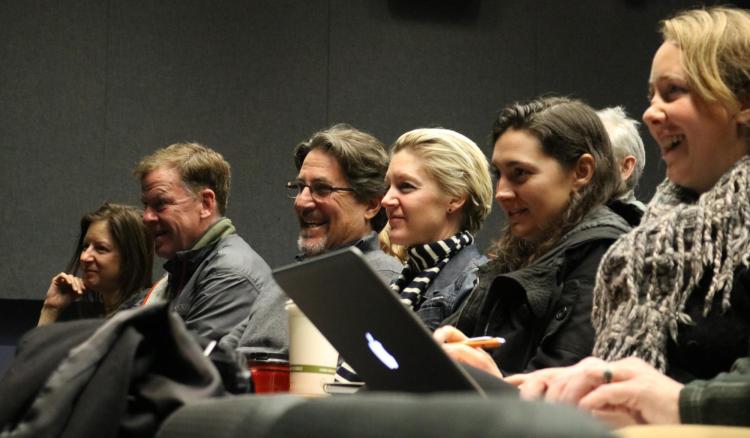 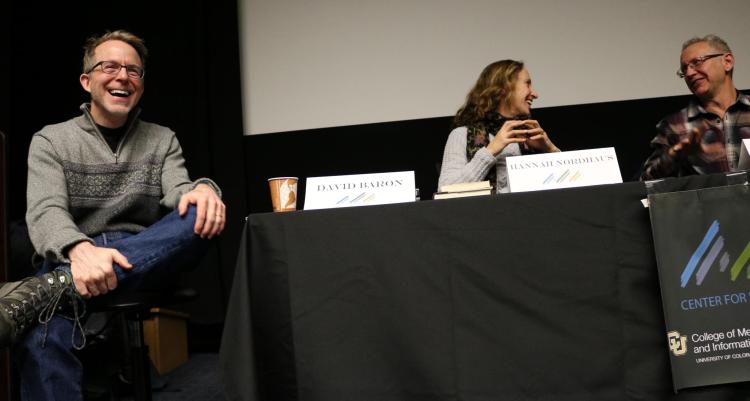 Five former Ted Scripps Fellows—David Baron, Scott Carney, Erin Espelie, Michael Kodas and Hannah Nordhaus—sat down together at the University of Colorado Boulder campus on Feb. 1, 2018 to discuss the whys and hows of nonfiction book writing at the first ever Center for Environmental Journalism book publishing panel.

While each of these writers’ circumstances are unique in why and how they have pursued becoming nonfiction authors, they all returned to a similar thought throughout the discussion: to become published, make yourself—the writer—a high priority.

"The first thing you need is faith that you can do it,” said Carney, bestselling author of What Doesn’t Kill Us, The Enlightenment Trap and The Red Market.

The biggest hurdle to writing a book is often writing the proposal for the book, as the panel discussed in detail. First, how does one find the time to write a proposal with all their other priorities and responsibilities?

“You have to treat it as a job. An hour a day before you do all of your stuff," advised Nordhaus, author of The Beekeeper's Lament and American Ghost. She admits it’s been a labor of love, one for her that would not be possible without her husband’s support. There’s a “combination of confidence, futility and obscurity,” in the process, but for Nordhaus it’s worth it.

Second, what is the goal of writing the proposal?

“A book proposal is the book you write about the book you want to write," said Kodas, bestselling author of High Crimes and Megafire, and Acting Director of the CEJ. "It's supposed to convince your agent and your editor that you have the chops to do this."

“The proposal can be a good way to get ideas down on a page and start thinking about structure,” said Espelie, co-director of the new NEST (Nature, Environment, Science and Technology) Studio for the Arts and Associate Director for the CEJ. “It’s doing some of the work for you.”

The panel overwhelmingly agreed it is also critical to emphasize how the author’s marketing strategy for the book will be profitable for the publisher.

“Try to pinpoint as narrowly as possible how the book can sell,” said Espelie.

Next, there’s finding an agent and an editor for your book.

When choosing an agent, the “most important single denominator is enthusiasm,” Carney said. “Some people really invest in your work and edit it with you and those [folks] are the diamonds in the rough.”

Or as Nordhaus said: “A young, hungry agent is better than a full one.”

Carney often experiments with different ways to connect the creative and business aspects of publishing to make the process more financially successful. First, he said, retain as many rights as you can.

Carney retained the audio rights to his most recent book, What Doesn’t Kill Us, and recorded an audiobook himself—in his own closet. So while he would never see royalties on the paper copy, Carney knew every time he went out on the road to promote his book, he could sell copies of his audiobook and keep the full profits.

“I have actually ended up making more on the audio book then I did on my advance,” he said.

Carney also made a book trailer for his latest release, a video on YouTube that could be easily shared on social media channels and his website. Kodas agreed this kind of self-made promotional material seems to make a difference. The panel acknowledged that the publisher is unlikely to do much marketing for your book, and if you want good press, you will have to work on marketing it yourself.

When it comes to money, they all agreed to aim for as large an advance as possible. Between paying expenses for the reporting and the fact that usually 15 percent goes the agent, what looks like a lot at the beginning may leave you in the red at the end—if you’re not careful.

“I always shoot for six figures,” said Kodas. “You need to do the math in advance.”

David Baron, author of The Beast in the Garden, former Ted Scripps Fellow, and current CEJ Scholar in Residence, planned 19 years in advance for his most recent book, American Eclipse. He had the idea back in the late 1990s but knew there would be a total solar eclipse in August of 2017. While it didn't take that long to write, Baron’s book is a great example of not giving up on a good idea and waiting for the right time to pitch a proposal and publish.

It became clear that nonfiction book writing is a complicated, committed process of work for these authors. Yet all but one of them have at least two books to their name, and will likely write more. What motivates them to continue this career?

For Carney, it is simply the best lifestyle. “I get to keep doing this,” he said, “and that is the reward.”