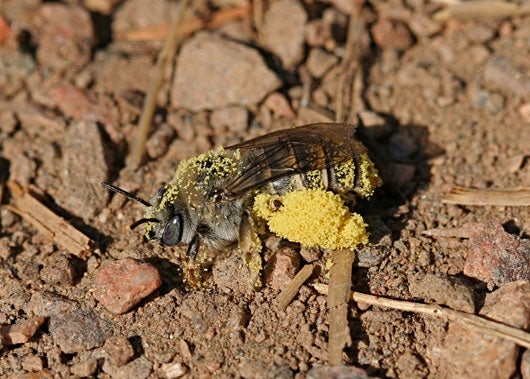 A cactus bee returns to its nest in the soil carrying a load of pollen collected from prickly pear cactus. Photo by Jeff Mitton

On a June afternoon, while hiking on Flagstaff Mountain, I paused at a convergence of trails to consider my path into the future. But I never made a choice, for the buzzing of bees distracted me. At first, I thought I had discovered a hive of honeybees, but a closer look revealed an aggregation of solitary bees.

About two dozen bees were on the ground, moving in and out of burrows that they had excavated in one of the paths. Fresh piles of soft dirt adjacent to the tunnel entrances indicated that some bees were enlarging their tunnels. Others were returning from foraging, their back legs thickly coated with pollen and a light dusting of pollen everywhere else except for their wings.

The cactus bee, Diadasia australis, is a species of solitary bee native to the western U.S. and northern Mexico. It takes its common name for its reliance on one or a few species of prickly pear cactus. It is larger and broader than a honeybee, and its long, grey hair gives it a furry appearance. Perhaps most striking is the delicate pattern of light and dark grey in its eyes.

People are most familiar with the honeybee, a social insect living in large colonies. Honeybee hives have a single queen and thousands of sterile female workers that assume different tasks. Some attend the queen, some guard the hive, some ventilate the hive and others forage for nectar and pollen.

In contrast, solitary bees live solitary lives. A female mates shortly after emerging from her natal nest and then chooses a site for her nest. Cactus bees typically dig a tunnel into the soil and excavate a compartment or cell for each egg. They provision the cell with pollen, often mixed with a small amount of nectar to form a paste. All of the work, including excavation of the tunnel and cells and the provisioning of the cells, is accomplished by a female working alone. When the cells are excavated, provisioned and filled with eggs, the female may start another nest so that she can lay more eggs. But many die after finishing a single nest.

Honeybees are generalists and are able to harvest pollen or nectar from a great diversity of species. In contrast, cactus bees and other solitary bees in the genusDiadasiacollect pollen from cacti. Foraging studies reveal that each bee species collects pollen from one or several species of prickly pear cactus.