Spiders disperse on strands of silk 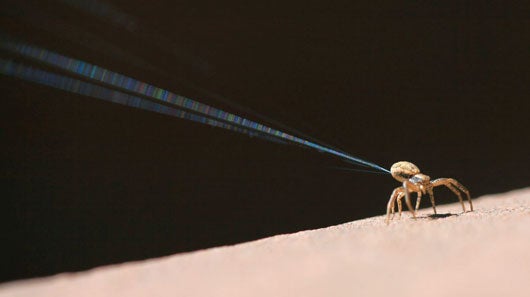 A spider releases strands of silk that will loft it into the air. Photo by Jeff Mitton

This last summer I was sitting on my front porch, enjoying a cup of tea in the warm sun, when a posturing spider distracted me.

The spider was standing with its legs held nearly vertical, as if it was trying to stretch on tiptoe, and holding its hindend as high as possible. When the wind shifted the spider turned to keep its face into the wind.

I had never seen a spider on tiptoe before, but I had a suspicion, so I ran for a magnifying glass and camera. A closer look revealed that the spider was trailing a strand of silk that reached upward at a steep angle.

As the wind shifted the thread glinted in the sun, refracting sunlight into its component wavelengths, spraying colors. Because refraction made the silk conspicuous, it also revealed that the spider had played out at least six threads.

The posturing spider was preparing for liftoff.

Spider dispersal for many, but not all, species of spiders is by ballooning, a passive aerial movement aided not by a buoyant balloon, but by a kite of silk. Spiders climb to a high point such as a tall plant in a meadow or a fencepost and, when they sense an updraft, release a line of silk often referred to as gossamer. Tiny spiders release a single strand while larger spiders release several to many strands. When a sufficient amount of gossamer is aloft, the spider is pulled up into the air.

Charles Darwin, while serving as the naturalist aboard HMS Beagle from 1831 to 1836, made observations providing insight into the distance that ballooning spiders can drift. Sailing south in the western south Atlantic, HMS Beagle had passed the bay of the Rio de la Plata and was 60 miles off the coast of Argentina. One afternoon he noted that the ship's rigging was festooned with gossamer, and dusky red spiders were lowering themselves from the rigging to the deck. He noted that the rigging had snagged thousands of spiders and that the ship had intercepted clouds of spiders several times while in the bay of the Rio de la Plata. Darwin also reported that the aeronauts included males, females, adults and juveniles.

Darwin established that spiders could balloon at least 60 miles, but observations of spiders on oceanic islands, and particularly islands recently established by volcanism, indicate that spiders can balloon hundreds of miles. Nets towed by hot air balloons and planes have caught spiders thousands of feet above the ground.

The type of silk used in ballooning can be made by some groups of spiders, but not all. Spiders who cannot balloon must walk from one place to another. But ballooning allows spiders to cross great gulfs of inhospitable territory and to establish new populations in novel environments, isolated from other populations.

Isolation allows the populations to adapt to unfamiliar habitats, competitors and prey, and provides greater opportunity for natural selection to create a new species. Consequently, in comparison to spiders that disperse on foot, groups of spiders that can balloon have greater species diversity.