Ralph Ellison spent four decades writing but never completing a follow-up to ‘Invisible Man.’ One of two editors who have spent 15 years assembling the work is a CU associate professor whose life mirrors key aspects of Ellison’s novel. 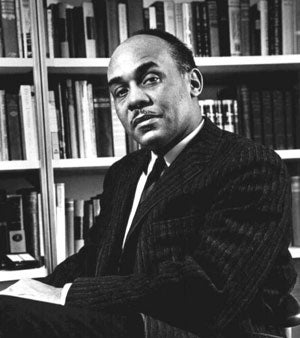 Adam Bradley was not the sort of person who could help bring a literary titan’s work to fruition. That was, at least, the judgment of Bradley’s first-grade teacher, who informed his mother that Bradley could not read and “just isn’t that bright.”

Three decades later, Bradley is a Harvard-educated associate professor of English at the University of Colorado. Bradley and John Callahan of Lewis and Clark College in Portland, Ore., are co-editors of Ralph Ellison’s long-awaited and just-released second novel, “Three Days Before the Shooting…”

Bradley, it turns out, reads rather well. That is largely thanks to the mother who believed in him and the grandmother who home-schooled him for nine years. With their help and his tenacity, he is a central figure in a literary event made more significant by the fact that it might never have happened. Even before its Jan. 26 release, the novel made several lists of 2010 “must-read” books.

Bradley and Callahan spent 15 years organizing, assessing and assembling a mountain of drafts of Ellison’s second novel, which remained unfinished after four decades of writing.

“Invisible Man,” published in 1952, propelled Ralph Ellison to a life of fame, prestige and expectation. Immediately hailed as an important work and now revered as an American classic, “Invisible Man” is a harrowing narrative of the life of an unnamed black man in 1930s America.

The novel won the National Book Award in 1953 and raised hopes about what Ellison himself promised: a second novel.

After the stunning success of his first novel, which has never been out of print, Ellison crafted thoughtful essays, gave important lectures and amassed scholastic honors. One thing he did not do, however, was complete the second novel. Some speculated that Ellison was paralyzed by self-imposed pressure to craft an epic work.

Even if he were burdened by the breadth of his ambition, Ellison kept grinding away at what he once called the “very stern discipline of writing.” In 1982, Ellison said his aim in his second novel was to achieve “the aura of summing up,” of rendering the full complexity of the American experience on the page.

“That’s a lofty aim,” Bradley observes. “Essentially he’s talking about writing the great American novel,” a work on par with “The Adventures of Huckleberry Finn” or “Moby Dick.”

In 1994—42 years after his first novel appeared—Ellison told The New Yorker that he was working every day on his second novel and that “there will be something very soon.”

Not that hope was, by then, high. “By the time of his death in 1994, his failure to produce that second novel had made Ellison, a proud man, the butt of surreptitious jokes and cruel remarks,” writes biographer Arnold Rampersad.

The failure was a ponderous albatross sagging around Ellison’s neck, Bradley says. “It was the great defeat.”

From left to right: Bradley, Callahan, Cover for "Three days before the shooting..."

Bradley was a key part of that effort, which he joined as a 19-year-old student at Lewis and Clark College. He had entered the college in 1992 and was a student of Callahan, who by 1994 needed help making sense of the sprawling work Ellison left behind.

Bradley had an affinity with Ellison—whose father died when he was a child, whose first novel vivified America’s racial divide, and whose unfinished second novel centered upon a race-baiting senator of “indeterminate race.”

Fathers and sons. Black and white. These issues spoke to Bradley, whose own father did not raise him. His mother is white, and his father, now deceased, was black. 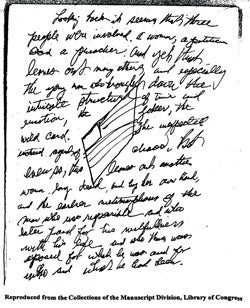 This is one of many notes made by Ralph Ellison that illustrate the author's efforts to outline the epic novel he was trying to create. Ellison's drawing of the American flag seems to reflect his deep admiration for the ideals of the United States. This note, written on the back of an envelope dated March 24, 1977, sums up his novel this way: "Looking back it seems that three people were involved. A woman, a politician and a preacher. And yet that leaves out many others, and especially the young man who brought down the intricate structure of time and emotion, the joker, the wild card. The unexpected emotional agent of chaos. But even so, this leaves out another woman, long dead, and by her own hand, and the earlier metamorphosis of the man who was responsible and who later paid for his willfulness with his life and who thus was exposed for what he was and for who and what he had been." Click image to enlarge.

Ellison’s second novel dwells on paternity, race and the democratic promise of America. The senator is assassinated by a black man who, it turns out, is the senator’s son. The senator’s surrogate father, who is black, tries in vain to save the senator.

The subject of fathers and sons, which Bradley terms “almost an obsession for Ellison,” has everything to do with Ellison’s own story, Bradley says. Ellison was always searching for the image of the father he barely knew.

A character in “Invisible Man” tells the protagonist, “Be your own father, young man.” That theme winds through Ellison’s first novel and appears more dramatically in the second, Bradley observes.

“Ellison was writing a novel concerning betrayal and redemption, black and white, fathers and sons,” the editors write. “It is a novel that takes as its theme the very nature of America’s democratic promise to make the nation’s practice live up to its principles … regardless of race, place or circumstance.”

Captivated by these themes, Bradley, then still a student, became an accomplished literary archaeologist. Callahan was impressed and asked Bradley to co-edit the second novel.

Before Bradley could devote himself fully to the project, though, he established his academic credentials. He earned his Ph.D. in English and American Literature and Language from Harvard University in 2003.

As Bradley notes, concentrated work on “Three Days Before the Shooting …” began about 10 years ago and continued until “just about now.”

The editors explain why it took so long: Ellison left behind “a series of related narrative fragments, several of which extend to over 300 manuscript pages in length, that appear to cohere without truly completing one another.”

The work comprised 27 boxes of archived material in the Library of Congress, thousands of manuscript pages and 469 computer files on 84 disks.

A 2007 Washington Post story notes that Callahan was mystified by the fact that Ellison had written scenes to “near perfection” in the ‘50s and ‘60s but revised them extensively a quarter-century later on the computer.

Bradley, reared in the digital age, deduced that Ellison became transfixed by the computer’s power to move paragraphs, insert words, delete whole sections. Ellison was a technophile, and, “the shifting and shaping of his second novel became a new kind of mania,” the Post observed.

There may have been a method in the maddening array of rewritten episodes, fragments, character and plot outlines made by hand, on typewriter and finally on computer. But the author’s ultimate aim was unknown. Ellison left no instructions on what should be done with his work.

This was a gargantuan literary jigsaw puzzle composed of sometimes-ill-fitting bits and bytes.

Ellison composed episodically—crafting scenes one after another and often rewriting entire episodes, sometimes with different endings or from different perspectives. Later, he would stitch episodes together. The novel includes sections not yet fused that approach a conclusion not yet settled.

Readers can use this book to see how a literary masterpiece takes shape, Bradley adds. “You can only learn so much about the craft of fiction by studying classic novels alone. In fact, you often learn more by reading imperfect fiction, because the seams show.”

Later this year, Yale University Press will publish Bradley’s second book related to Ellison, “Ralph Ellison in Progress,” which is a critical exploration of the craft of Ellison’s fiction; it promises to reveal what Bradley learned from the seams in Ellison’s writing.

Bradley, who joined CU’s faculty last year, is also the author of “Book of Rhymes: The Poetics of Hip Hop” (2009, Basic Civitas Books) and is co-editor of the forthcoming “Yale Anthology of Rap.”

Bradley, a native of Salt Lake City says being able to publish Ellison’s second novel while at CU-Boulder is particularly meaningful, “because the relative racial homogeneity of our community makes it possible to side-step some of the challenging issues Ellison’s novel brings up. Reading the book denies us that evasion.”

He is also pleased that he’ll teach a graduate seminar on Ellison later this year. Especially for young writers, Bradley says, the second novel is a great tutorial. “It gave me the encouragement to know that even the best of writers will sometimes write a bad sentence.”

And, Bradley adds, “Maybe the kind of mixed-up stuff that you’re writing can, through dint of dedication, produce a great work.”

Adam Bradley will speak about this personal and literary saga at the CU-Boulder Alumni Association’s Smart Lunch on Thursday, Feb. 25 at Hotel Teatro, Kevin Taylor's Restaurant, at 1100 14th St. in Denver. For more information and to register, e-mail becky.cabral@colorado.edu or click here.