Depression Rx: Get dirty, get warm

Maybe we should spend more time in the spa and playing in the dirt, research suggests

Provided by:
Office of News Services

The man who discovered that playing in the dirt might ease depression is probing the link between higher temperatures and elevated mood.

The upshot is potentially significant. Understanding these mechanisms might help scientists craft better treatments for depression and other mood disorders, he says.

Christopher Lowry, an assistant professor of integrative physiology at the University of Colorado at Boulder, believes this area of research is promising. He’s not alone. The National Science Foundation recently granted Lowry a $500,000 Faculty Early Career Development Award, a prestigious honor also called the CAREER Award, to continue his study of the role of temperature in mood.

The CAREER Award is given to talented young faculty members engaged in outstanding research and in efforts to integrate education with research. Lowry is one of six faculty members in the College of Arts and Sciences to win CAREER Awards so far this year.

One might wonder why the mood-altering effect of warmth hasn’t been studied more already. Since the Roman Empire, people have used spas and other “warm therapy” to treat arthritis, back pain and fibromyalgia. In ancient Japan, charcoal burners used hot (but not scalding) kilns as saunas.

“Whether lying on the beach in the midday sun on a Caribbean island, grabbing a few minutes in the sauna or spa after work or sitting in a hot bath or Jacuzzi in the evening, we often associate feeling warm with a sense of relaxation and well-being,” Lowry writes in a recent edition of the Journal of Psychopharmacology.

Near his CU laboratory, abuzz with student researchers and packed with equipment, Lowry expounds on that theme. “Intuitively, we all understand that temperature affects our mood,” he says. But a link has not been clearly defined. “So that’s what we’re going after.”

As Lowry notes, virtually all anti-depressant drugs activate the serotonin system; serotonin is a neurotransmitter that affects appetite, mood and aggression. “We set out to understand how this happens,” Lowry says.

Lowry’s research group noted studies from the 1970s that showed that warming a small piece of skin in rats causes increased activity in an area of the brain with serotonin–producing neurons. “So then we had a potential pathway,” Lowry says.

This area of the brain is sensitive both to temperature and the activation of the immune system. Lowry’s group has replicated the earlier experiments, exposing rats to warm temperatures and observing increases in serotonin activity.

Lowry’s research augments the temperature-serotonin probes of the 1970s. But that line of inquiry faltered for a time, and Lowry suggests a reason: An influential paper in 1987 found that serotonin-activated neurons, or brain cells, were not sensitive to temperature. “That effectively limited research in this area for 20 years,” Lowry observes.

But the 1987 study looked at only a small portion of the serotonin neurons in cats. The study focused on serotonin-activated neurons in the dorsal raphe nucleus, which provides serotonergic responses for much of the forebrain. The areas of cats’ brains tested were not sensitive to temperature.

As Lowry and others note in the Psychopharmacology article—titled “That warm fuzzy feeling: brain serotonergic neurons and the regulation of emotion”—the 1987 study recorded responses from relatively few neurons, whereas there are about 15,000 serotonin-responsive neurons in the dorsal raphe nucleus.

Later studies found a region of the dorsal raphe nucleus that is thermosensitive. Lowry suspects this region is related to depression.

“So we’re studying this from two angles,” the immune activation of serotonin-producing neurons and the thermosensitivity of those neurons. 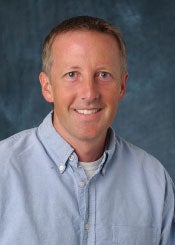 Christopher Lowry, an assistant professor of integrative physiology at the University of Colorado at Boulder

Lowry’s lab has been a world leader in demonstrating that there are different subpopulations of serotonin-producing neurons, some associated with anxiety, others with panic, immune activation and antidepressant-like effects.

The findings of this work contradict one view of serotonin, which is: “If you know one serotonin neuron, you know them all.”

Although he’s a young faculty member, Lowry has already amassed an impressive resumé. While at Bristol University in England in 2007, Lowry found that a strain of “friendly” bacteria stimulated the immune system and boosted serotonin levels—causing an antidepressant-like effect—in mice.

Newsweek, The Times of London and other media heralded this discovery, originally published in the journal Neuroscience. At the time, he said: “These studies help us understand how the body communicates with the brain and why a healthy immune system is important for maintaining mental health. They also leave us wondering if we shouldn’t all be spending more time playing in the dirt.”

Lowry focused on Mycobacterium vaccae, which is benign, common in soil and which has been shown in human clinical trial trials to ease symptoms of psoriasis, allergies and asthma.

Clinical trials with the bacterium have also been conducted on cancer patients. The bugs didn’t prolong lives, but patients did have better moods, improved outlook and less pain.

Lowry says that since the trials in cancer patients no one has probed the relationship between immune-system activation using M. vaccae and mood, and very little research has been done on temperature and mood.

And while scientists know that serotonin is related to mood, appetite and aggression, exactly how the substance is involved remains a mystery. The same is true of antidepressants such as Prozac and other Selective Serotonin Reuptake Inhibitors.

“It’s a complete black box how these drugs work, which I think many people might find surprising,” Lowry says. Anti-depressants were developed for other purposes, he adds, and it was “good fortune” that they were found to have effects on mood.

Cracking the mystery remains Lowry’s goal: “We think that if we understood what makes these serotonin neurons different from other neurons that we would then be in a position to develop rational new therapies for treatment of depression.”

Understanding the pharmacology of these neurons and how stimuli such as temperature and immune activation affect these cells is “our ultimate aim,” Lowry concludes.

As Lowry notes, several clues suggest a connection between temperature and mood. People who are depressed often experience altered temperature cycles. Virtually all anti-depressants can cause sweating, a thermoregulatory cooling mechanism typically triggered when a person gets warm.

This system may be activated by exercise. When you exercise, body temperatures rise, and you sweat. “That very likely involves some of the mechanisms that we’re studying,” Lowry says.

Several studies have shown that regular exercise has an antidepressant effect. “So they have studied exercise, but they haven’t studied temperature change, which is a component of exercise.”

Serotonin neurons can be activated by warm temperature externally (via the skin) and internally. The calming effect of body warmth seems to occur only up until the temperature becomes hazardous, around 104 degrees Fahrenheit. “So we think there’s a link between the system that cools the body and a sense of relaxation.”

In hot pursuit of answers, Lowry is clearly energized by this work. “I like science that kind of takes something that evolved, that we all can relate to, and explains how that happens.”

Besides, understanding exactly how saunas cause comfort could generate a lot of warm, fuzzy feelings.