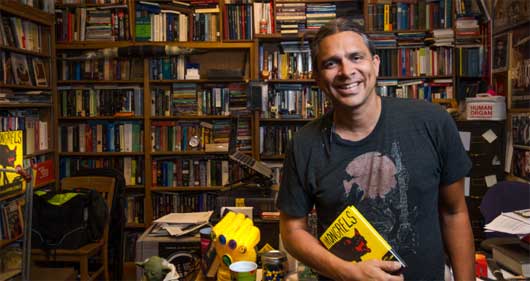 Published author and English Professor Stephen Graham Jones relies on his students to bring in new ideas and new ways of seeing things.

Working in a college environment where most of his students are between 18 and 22, Jones hears a lot of stories about the teenage years. This, he says, helps him identify the hinge points of adolescence, which contribute to his narrative structure. “What I’m seeing is the person that resulted,” said Jones. “But when they tell stories, they’re telling back to the triggers that catapulted them here.” As his students are working on their own prose, Jones encourages them 1) to read way outside their comfort zones, and 2) don’t get caught up on the same project for more than a couple months. With his own craft, Jones tries to write a story a week; his preferred space is his study at home where he has a stand-up desk and playlists on easy access. “At any moment, I can walk away from the keyboard and go watch an “X Files” with my kids, or go play ping pong with them, or run the dogs,” he said. “That’s really important with writing. You have to be able to take breaks as you need them. At home, I can walk away, recharge and come back a half hour later ready to go.” A commitment to writing is the most important, if not essential, ingredient in Jones’ literary success. Though he prefers to write at home, he spends a lot of time reading and writing in airports, between book tours and speaking engagements. For Jones, writing takes priority over everything but family, friends and health. “Real writers write,” said Jones. “The most important thing, even more important than talent, is discipline. I’ve learned to work where I can and to not let travel interfere with my output.” This weekend, Jones will participate in three panels at Denver Comic Con: The Art of the Complex Villain, Fantasy vs. Sci Fi: Drawing the line in Fiction and Monsters, Not Just for Horror Anymore.

He will also sign books and visit with fans in Author’s Alley both Friday and Saturday. “I love dress up cons,” he said. “It allows people to be who they really think they are, whether they dress up or not. It forms a sense of kinship or community. Con gives us a chance to plug into that for a weekend at a time.” Later this summer, Jones’ agent will submit ideas for two follow-up werewolf novels, with hopes of turning Mongrels into a trilogy. He also has an anthropological thriller in the works, which has as its setting a visiting lecture in CU-Boulder’s own Hale 270. And, come August, Jones will lead another group of aspiring young writers through genre literature and the development of their own prose. “It’s really neat when you can show a student a path that they had not known was even there at all,” he said. “If I don’t give 100 percent teaching, I don’t give 100 percent writing.” To see a list of other CU-Boulder affiliates presenting at Denver Comic Con, visit the College of Media, Communication and Information website. June 17, 2016