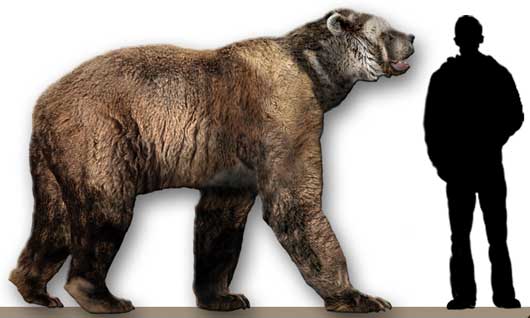 A photo of a now-extinct short-faced bear that weighed nearly a ton. Photo courtesy of CU-Boulder.

A study led by the University of Adelaide and including the University of Colorado Boulder indicates giant ice age-era mammals that roamed Patagonia until about 12,300 years ago were finally felled by a rapidly warming climate, not by a sudden onslaught of the first human hunters.

Led by the University of Adelaide’s Australian Centre for Ancient DNA (ACAD), the study revealed that it was only after the climate warmed, long after humans first arrived in Patagonia, that the large animals known collectively as megafauna suddenly died off. The victims included a mind-bending menagerie of elephant-sized sloths, saber-toothed cats, horses, camels and gigantic bears.

The timing and cause of the rapid extinction of the megafauna in Patagonia – a geographic region at the base of South America that includes the lower sections of Argentina and Chile – has been a mystery for decades. The new study was published today in the journal Science Advances.

The DNA and age of bones from South American megafauna showed the extinctions occurred long after human arrival there and coincided with climate warming."“Patagonia turns out to be the Rosetta Stone – it shows that human colonization didn’t immediately result in extinctions, but only for as long as it stayed cold,” said Professor Alan Cooper, study leader and ACAD director.

“Instead, more than 1,000 years of human occupation passed before a rapid warming event occurred, and then the megafauna were extinct within a hundred years,” said Cooper. “It was humans, but they needed the climate to warm first.”

“The DNA and age of bones from South American megafauna showed the extinctions occurred long after human arrival there and coincided with climate warming,” said Metcalf, of the ecology and evolutionary biology department. “We found that members of the camel family, for example, considered resilient survivors of the last ice age, suffered huge losses in genetic diversity.”

The researchers studied ancient DNA they extracted from bones and teeth found in caves across Patagonia and Tierra del Fuego to trace the genetic history of the ice age mammals. As part of the research they also radiocarbon dated the samples, more than doubling the number of existing radiocarbon dates for Patagonia megafauna, she said.

The pattern of rapid human colonization through the Americas, coinciding with contrasting temperature trends on each continent, allowed the researchers to untangle the relative impact of human arrival and climate change.

The earliest Americans are thought by most scientists to have traveled from northeast Asia over the Bering Land Bridge and into present-day Alaska roughly 16,000 years ago.

“The Americas are unique in that humans moved through two continents, from Alaska to Patagonia, in just 1,500 years,” said Professor Chris Turney of University of New South Wales, a study co-author. “As they did so they passed through distinctly different climate states – warm in the north and cold in the south. As a result, we can contrast human impacts under different climate conditions.”

As part of the study the team amplified fragments of ancient DNA and pieced them together like a high-tech jigsaw puzzle to reveal genetic histories of the megafauna.

“This is a good example of how researchers from different disciplines and institutions can work together to answer long-standing and important questions in science,” said Metcalf.