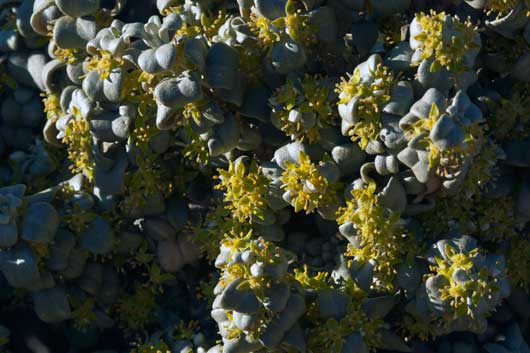 Roundleaf buffaloberry, Shepherdia rotundifolia, grows as a shrub three to six feet tall, but its color makes it a conspicuous member of the plant community on the Colorado Plateau. Its leaves are approximately an inch in diameter, oval, and the leaf edges are turned under—hence the name roundleaf. The leaves are thick but pliable, with a dense layer of trichomes that creates the distinctive silvery green color.

Trichomes are outgrowths of the epidermis on plants leaves and they come in many forms and serve many functions. Trichomes are commonly hairs that may be long or short, singular or branched, sparse or dense.

Collectively, they may form a layer of bristles or dense wool, and these layers frustrate the efforts of some herbivores. Trichome hairs may be glandular, releasing plant secondary compounds that repel insects. For example, trichomes on the leaves of thyme release terpenoid compounds with defensive fragrances and tastes, and we have adopted some of these as seasonings.

Roundleaf buffaloberry have a complex taste, initially sweet but with a bitter or sour aftertaste. The bitterness is due to saponin, and it can be overcome with large amounts of sugar."Roundleaf buffaloberry has peltate trichomes, meaning that they are shaped as small beach umbrellas with frilly edges. They are densely packed so that they both shade the leaf from the searing sun and also create a boundary layer of air that slows the loss of water vapor. These trichomes are an adaptation to a bright, arid environment.

Three species of buffaloberry are recognized, and all three are found on the Colorado Plateau. Russet buffaloberry, Shepherdia canadensis, grows throughout Canada and the northern states, and it occurs from 7,000 to 10,000 feet in Utah and Colorado.

Silver buffaloberry, Shepherdia argentea, is a thorny shrub that occurs in pinyon-juniper woodlands and sagebrush between elevations of 4,500 and 7000 feet on the Colorado Plateau and its range extends north to Idaho and British Columbia. Roundleaf buffaloberry occupies the lowest, hottest and driest elevations of the three species, and its geographic range is limited to the Colorado Plateau. Both roundleaf and silver buffaloberry attribute their silver leaf color to peltate trichomes.

Roundleaf buffaloberry occupies a range of environments on the Colorado Plateau, and a study of adaptation to environments revealed more evidence supporting the role of trichomes. The thickest layers of trichomes were found in the population occupying the hottest and driest site, leading to the conclusion that roundleaf's peltate trichomes are an adaptation to water stress.

Roundleaf buffaloberry have a complex taste, initially sweet but with a bitter or sour aftertaste. The bitterness is due to saponin, and it can be overcome with large amounts of sugar. Saponin has antifungal activity—it bores holes into the surface of fungi—and I have a hunch that this inspired its use in pemmican, which could be stored through the winter months. Saponins also discourage the growth of bacteria and insect herbivory.

Roundleaf buffaloberry’s chemical defense, saponin, is not sufficient to discourage browsing by cows. A study of plant remains stored in packrat middens showed that roundleaf buffaloberry disappears from areas dedicated to grazing, but thrives when cows are excluded.