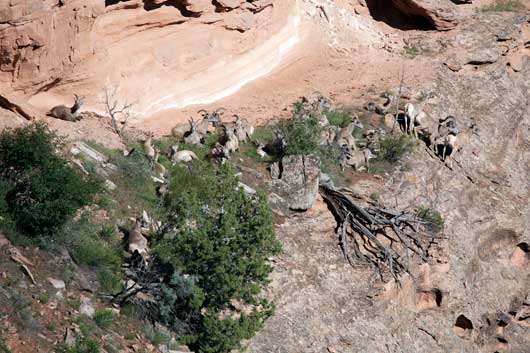 After photographing landscapes at dawn, I was returning via the Rim Drive to my campsite at Colorado National Monument (CNM).

A flagger controlling traffic at a road repair site told me that I would be allowed to pass in a few minutes, so I got out of my vehicle and started a conversation with her. I am indebted to Ana Jarvis, for when I told her that I was doing photography, she walked me the 10 feet to the edge of the cliff and pointed out a herd of bighorn that was not visible from the road.

Twenty-four desert bighorn were resting in the morning sun on a ledge between steep slopes of sandstone. Most of them were reclining, though several were standing and looking downslope, perhaps considering moving into Monument Valley. A single ewe lagged behind the herd, 50 feet above them, and another ewe was below, walking slowly down the steep slope.

With the exception of pictographs and petroglyphs of bighorn, no evidence places bighorn sheep in the last several centuries in either CNM or the Black Ridge Canyons Wilderness Area (BRCWA) immediately to the west. Desert bighorn have historically occupied the area near the confluence of the Green and Yampa rivers, to the north.

These introductions provided the initial gene pool of the Black Ridge Desert Bighorn Herd, a management unit that includes both the CNM and the BRCWA. Within that management designation, somewhat independent herds occupy Fruita Canyon, Wedding Canyon and Rim Drive in CNM and several areas in the BRCWA. A census taken in 2009 and 2010 recorded approximately 50 sheep in CNM and a total of 200 sheep in the entire Black Ridge desert bighorn herd.

One of the females in the photo has a purple ear tag (No. 150) and a collar. Kim Hartwig from the National Park Service at CNM provided the information on sheep introductions, but she directed me to Stephanie Durno at Colorado Parks and Wildlife for information on Lady 150 and studies of the Black Ridge Herd.

Lady 150 was one of three ewes tagged and collared in Devil's Canyon in January of this year to provide sentinels for disease outbreaks, major habitat shifts and to aid location of herds for annual surveys. Durno was surprised that Lady 150 had migrated to join a different herd since January. Annual surveys record gender ratios, diseases and other measures of health, and these data are used to compare the Black Ridge desert bighorn herd with the Dominguez-Escalante herd to the south.

Bighorn sheep are shy — they usually move away from humans. It is apparent in the photo that several of the sheep were watching me, but they were not alarmed. Perhaps they could assess my speed and agility and were also able to distinguish a Canon from a rifle.