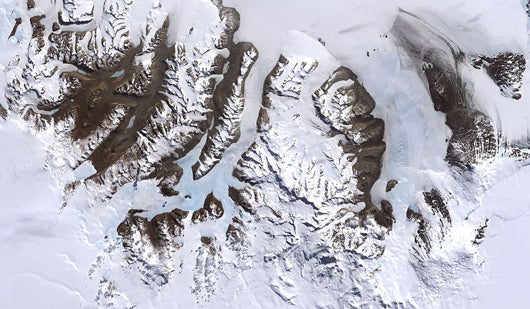 The perpetually ice-covered lakes in Antarctica’s McMurdo Dry Valleys preserve the dissolved remnants of black carbon from thousand-year-old wildfires as well as modern day fossil fuel use, according to a new study led by the University of Colorado Boulder.

The distinctive molecular signatures can provide researchers with a glimpse into the planet’s long history of combustion. Atmospheric black carbon, which is generated by wildfires or fossil fuel use, becomes preserved in glaciers, which in turn serve as long-term reservoirs and chemical time capsules.

The McMurdo Dry Valleys of Antarctica are the largest ice-free region of the continent and are considered a polar desert environment due to their low humidity, scarce precipitation and lack of plant life. During the summer, glacial melt feeds closed-basin lakes. Some of these lakes have saline bottom waters from drawdown events about a thousand years ago.

These briny bottom waters preserve the chemical signatures of fires that occurred thousands of years ago and thousands of miles away, the study found. Dissolved black carbon is present in the world’s oceans as well as on land, and now has been found to be detectible in the pristine, isolated lakes of Antarctica.

“We know the long-term history of these lakes and that there are no local forest fires burning nearby, so we can be more certain that these woody signatures have come over from South America, Africa or Australia, for instance,” said Alia Khan, a graduate researcher in the Institute of Arctic and Alpine Research (INSTAAR) at CU-Boulder and lead author of the study.

“Overall there have been relatively few direct measurements of dissolved black carbon in the cryosphere due to the difficulty of sample collection from these remote environments,” Khan added. “These are the first we know of from freshwater lakes in Antarctica.”

Closer to the top of the lakes, the researchers also found low, but distinct, concentrations of man-made black carbon, possibly from helicopter use in and around the Antarctic continent.

The study may open new avenues of inquiry into how black carbon signatures have shifted over time and how dissolved black carbon is transported to the world’s oceans and lakes.

“Having a new chemical tool that allows us to identify the source and transformation of black carbon is very exciting,” said Diane McKnight, a professor of Civil, Environmental and Architectural Engineering at CU-Boulder, an INSTAAR fellow and a co-author of the study.

The new paper “Dissolved black carbon in Antarctic lakes: chemical signatures of past and present sources” was co-authored by Rudolf Jaffé and Yan Ding of Florida International University.