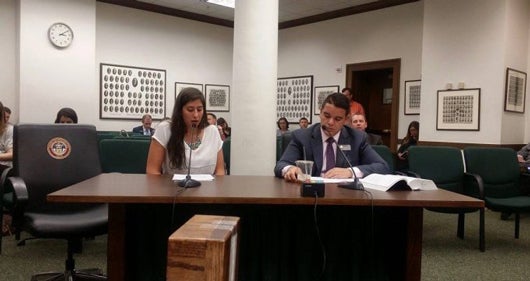 Students testify to a committee of the Colorado General Assembly at the State Capitol.

The seven undergraduate students in Professor Jeffrey Zax’s Applied Economic Analysis and Public Policy class didn’t stop at analyzing the economic impact of bills considered during the recently concluded legislative session. They even showed up to testify.

"Rep. (Dianne) Primavera cited my analysis of HB16-1372 when she was advocating for the bill," said Devin Bazata, an economics major from Thornton, Colorado. "Seeing my work being used in a situation like that was something I never guessed would happen."

The students also created a legislative scorecard, evaluating all bills considered by legislators this session and giving the Colorado General Assembly mixed reviews in terms of proposed bills’ impact on the state’s economy. This year’s score? B-. 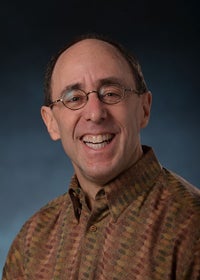 Each student also prepared a detailed economic analysis of four bills, distributed these analyses to committee members and testified in person on two of their four bills.

"This course is a win-win for both our students and the state,” Zax said. “It is a great opportunity for students to apply their training in economics to actual policy issues. It is also a great way for the Colorado General Assembly to get high-quality, non-partisan economic advice."

To develop the report card, students assigned a summary rating to each of the bills according to a standardized rubric. The assignments were based largely on the final text for bills passed and, for the most part, on the bill summary for bills not yet passed.

"This experience put us in the real world," said Alora Riley, an economics major from Denver. "I remember testifying on a bill after the head of the department of labor and, though nervous, feeling prepared and confident in what I was arguing."