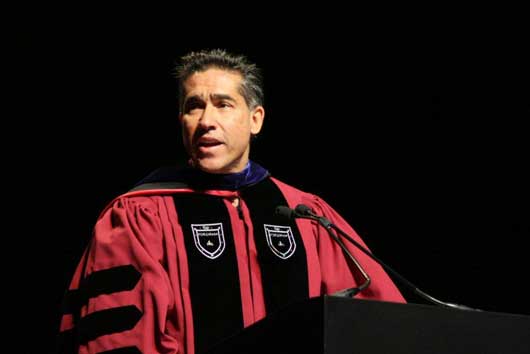 Francis Beckwith has been named the fourth Visiting Scholar in Conservative Thought and Policy at CU-Boulder.

Francis Beckwith will serve as the Visiting Scholar in Conservative Thought and Policy for the 2016-17 academic year. He is the fourth person to hold the position.

Beckwith earned a PhD in philosophy from Fordham University and a master of juridical studies from the Washington University School of Law in St. Louis. Beckwith, professor of philosophy and church-state studies at Baylor University in Texas, will succeed Brian Domitrovic, whose appointment ends this academic year.

When he learned that CU-Boulder sought a visiting scholar in conservative thought and policy, he was immediately drawn to the position, he said.

"I was impressed by the effort made by the university leadership to create an environment in which true intellectual diversity can flourish," Beckwith said, adding that he looks forward to getting to know CU’s students and faculty, in addition to many of the university’s Colorado constituencies.

With a presidential election upon us, an unexpected Supreme Court vacancy changing the year’s political trajectory, and so many public questions with which to wrestle, I cannot imagine a more exciting time to be the Visiting Scholar of Conservative Thought and Policy at the University of Colorado."He is scheduled to teach two courses per semester in fall 2016 and spring 2017. In fall, he will teach two courses in philosophy. One is an upper-level class on Thomas Aquinas and the other is an introductory course on "Philosophy and Society." Additionally, he will be encouraged to foster discussion by hosting public events in the campus community and perhaps around the state.

Beckwith said he plans to continue the tradition of bringing first-rate speakers to campus "who can help advance our public conversations" on important issues of the day.

"With a presidential election upon us, an unexpected Supreme Court vacancy changing the year’s political trajectory, and so many public questions with which to wrestle, I cannot imagine a more exciting time to be the Visiting Scholar of Conservative Thought and Policy at the University of Colorado."

Beckwith is the author of numerous publications and books, including “Taking Rites Seriously: Law, Politics, and the Reasonableness of Faith” and “Defending Life: A Moral and Legal Case Against Abortion Choice,” both published by Cambridge University Press.

Among other academic appointments, he has served as the Mary Anne Remick senior visiting fellow at the University of Notre Dame's Center for Ethics and Culture and as visiting research fellow at Princeton University's James Madison Program in American Ideals and Institutions.

Robert Pasnau, professor of philosophy and director of the Center for Western Civilization, Thought and Policy, which houses the Conservative Thought and Policy Program, said Beckwith is a "distinguished philosopher and legal scholar who will broaden the intellectual conversation on the Boulder campus."

"We're delighted to have recruited such a worthy successor to the previous three visiting scholars," Pasnau said.

In recent months, an advisory committee has been working to identify finalists for the next visiting scholar, who holds a one-year appointment. The committee has sought a “highly visible” scholar who is "deeply engaged in either the analytical scholarship or practice of conservative thinking and policymaking or both."