Why are male jagged ambush bugs darker than females? 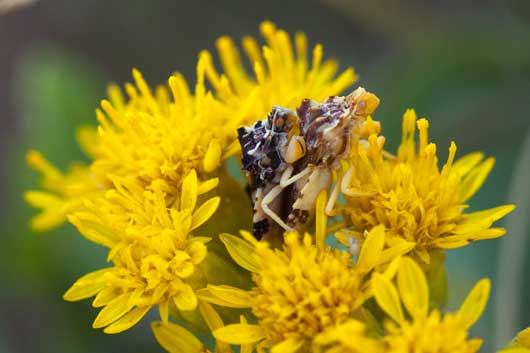 An amplectic pair of jagged ambush bugs in a cluster of tarred flowers. Click here to see larger image. Photo by Jeff Mitton.

Tarweed, Madia glomerata, is one of the last species blooming in mid-September, so the remaining insects become concentrated on it. On this afternoon in September, tarweeds were teeming with black and orange soldier beetles and jagged ambush bugs, Phymata americana.

Most of the jagged ambush bugs were paired, either amplectic, meaning that they were mating, or guarding. After mating, males retain their hold on females to monopolize them for hours or days, preventing other males from mating with them.

On this particular afternoon I saw four pairs of ambush bugs, and I noted what many others had already noticed and studied. Males are smaller and darker than females. In insects in general, larger females lay more eggs, so the size dimorphism is not unusual. But why are males darker than females?

Perhaps you have noticed that dark cars shed their snow faster than white cars on sunny days, or that dark cars get hotter in the summer sun. All other things being equal, dark objects absorb more heat energy from the sun.I imagined that the answer to this question was in the realm of sexual selection, which can be defined as natural selection in the context of reproduction. Sexual selection has two major modes, intersexual selection or female choice, and intrasexual selection or male combat. Female choice is known to produce brilliant colors in male lizards and birds. Male combat produces large, aggressive males and weapons such as antlers and horns. Given that the males were smaller and less cryptic in their favorite flowers, I suspected that this was a case of female choice.

Studies of mating behavior in jagged ambush bugs had shown that darker color provided no advantage when males battled with one another. So the color is not an indicator of male vigor, nor does it signal position in a dominance hierarchy. Consequently, male combat has not played a role in the development of dark male coloration.

In experiments designed to examine female mating behavior found no female preference for darker males. So the customary modes of sexual selection provide no insight into the color dimorphism in jagged ambush bugs. And yet, studies of amplectic pairs have reported that darker males have greater success in securing mates.

This was an intriguing puzzle.

Perhaps you have noticed that dark cars shed their snow faster than white cars on sunny days, or that dark cars get hotter in the summer sun. All other things being equal, dark objects absorb more heat energy from the sun.

Curious to see if darker males became warmer, a study was established in which paint was use to alter a bug's coloration, so that the full range of colors could be examined. The results clearly showed that darker males absorbed more heat energy from light and attained higher temperatures.

Male mating success was measured in arenas in the lab so that the ambush bugs could be watched carefully in temperature-controlled trials. Males and females were introduced to the arena and both the latency for coupling and the ultimate mating success was compared among males of various shades. These experiments were conducted at a cool temperature, to simulate the challenge of hunting for mates in the early morning, and also at a higher temperature that was typical of summer afternoons.

Dark male jagged ambush bugs warm up faster on chilly mornings, and are able to search earlier and faster than lighter males. Coupling success increases with hunting time and area searched, which increases with male pigmentation. So dark male ambush bugs stir earlier on chilly mornings and are more successful in the most important competition in life.