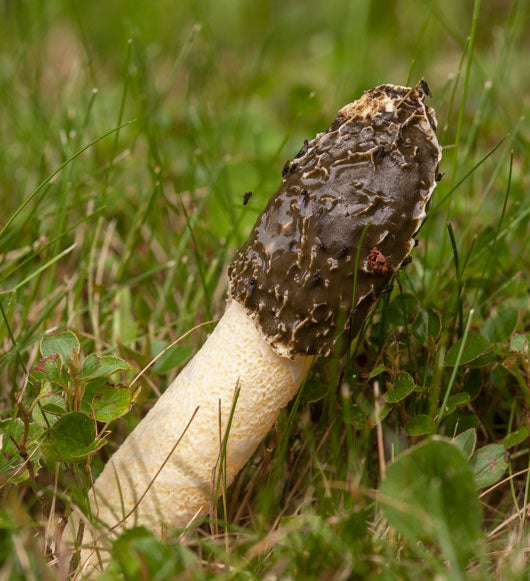 Flies consume a fetid slime for nutrition and disperse the mushroom's spores. Photo courtesy of Jeffrey Mitton. Click on picture for larger image.

I smelled it before I saw it.

A single fungus had appeared in my back yard and a stench announced its presence. A green, wrinkled cap oozing slime sat upon a 5-inch stalk. Tiny flies flew around it, hovered near it and waded in and consumed the slime.

This was one of 18 species of mushrooms called stinkhorns, all in the genus Phallus. This species was Phallus impudicus, common in North America and Europe, also present in parts of Africa. The specific name, impudicus, is derived from the Latin for "shameless" or "immodest." While most mushrooms rely on wind for dispersal, stinkhorns induce flies to disperse their spores.

The odor is memorable.

Necrophagous flies, or flies attracted to carrion and feces, have only soft mouth parts, so they feed on tissues softened by the process of decomposition, or on the fluids released during decomposition. This group includes many of the true flies, blowflies and flesh flies.

Mushrooms and flowers that attract flies have converged on a related set of chemicals to mimic the smell of rotting meat and feces. Sulphur compounds, such as dimethyl disulphide, mimic the distinctive smell of a corpse, which releases peptides containing the amino acids methionine and cysteine. Both of these amino acids are common in human and animal proteins and both contain sulphur. Stinkhorns mimic the smell of feces by releasing phenol, cresole and indole. A study of the air immediately around P. impudicus revealed a total of 59 volatile compounds, all contributing to the complex, offensive fragrance.

Flies are attracted to the cap of the mushroom by aromatic compounds emanating from a thick slime that flies and other insects drink. But the slime is also a dense suspension of spores, which are single cells that serve the same function as seeds. Bees and beetles also eat the cap or gleba and inadvertently swallow spores. To insure local dispersal, the slime has a potent laxative that induces flies to dribble tarry feces rich in spores, usually in close proximity to the stinkhorn.

On the day that I photographed the stinkhorn, a cloud of tiny flies consumed the slime. Some flew around and others hovered within an inch of the mushroom. Others were wading in the slime, while some were immobile with their mouthparts in the slime. In the time that I watched, only the tiny flies attended the mushroom.

Stingless bees in the genus Trigona have been observed on stinkhorns. They were cutting small portions of the cap and packing them into the pollen baskets on their back legs. It was not known whether the fragments of the cap would be eaten or used as building material.

In my experience, I have not sniffed any local flowers whose stench rivaled the impact of my stinkhorn. Evolutionary biologists are aware that the primary function of a species is to reproduce, but nevertheless stinkhorn's adaptations to disperse spores are surprisingly elaborate.

Jeff Mitton, mitton@colorado.edu, is a professor in the Department of Ecology and Evolutionary Biology at the University of Colorado.  This column originally appeared in the Boulder Daily Camera.