Good morning to the predator above my front door 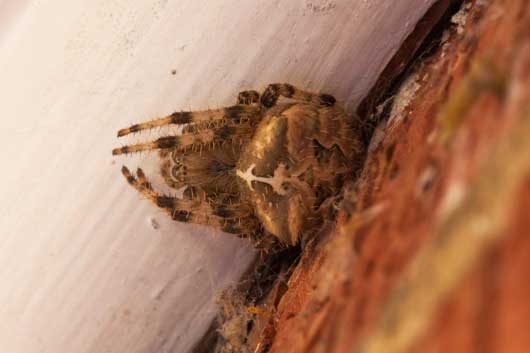 An orb-weaving spider waits to harvest insects from its web. Click here to see larger image. Photo by Jeff Mitton.

Each morning, with my first cup of coffee in hand, I step quietly onto my front porch to see which insects have spent the night.

I have occasionally found white-lined sphinx moths and praying mantises, and I usually find green lacewings, an assortment of moths and ladybugs. After inventorying the short-term residents, I visit the long-term resident, a female jewel or cat-faced spider.

She is a big spider, with an abdomen about the size of the tip of your thumb, and a full diameter approaching 1.5 inches. Spiders with large abdomens usually strike me as repulsive, but this one has grown on me.

She is a big spider, with an abdomen about the size of the tip of your thumb, and a full diameter approaching 1.5 inches. Spiders with large abdomens usually strike me as repulsive, but this one has grown on me.Each day she stands guard over her web and my porch, her abdomen wedged into a crevice between the brick wall and white wooden ceiling. Her web is difficult to see against the white ceiling, but dried fragments of insects snared in the silk give it away.

Colloquially, these are most commonly referred to as either jewel spiders or cat-faced spiders. Two prominent bumps on the front of the abdomen suggest cat ears to some imaginative people, but I don't see the cat face.

Neither common name is satisfactory, for each of them refers to at least three different spider species. But she is undeniably one of the orb-weaving spiders, a group known for the characteristic and graceful shape of its webs. The web has support lines radiating from a central hub, stabilized by a thread spiraling gracefully from the center to the periphery.

The orb-weaving spider, Araneus gemmoides, lives as far north as Alberta, and from British Columbia to Wisconsin south to Arizona and Texas. It is commonly found on houses, particularly near a light that draws bumbling insects to its web. It is recognized by its large size, the prominent horns and color pattern on the abdomen, and its web. Colors vary among individuals and also change with the seasons.

In summer, a much smaller male accompanied the large female. The male's diameter was about half that of hers, and he was slender, perhaps only 1/5 of her weight. She seemed always to be stationary at the edge of the web, but females are typically quiet during the day and more active at night. The male was constantly active, fiddling with the threads, adjusting things.

The male has not been in the web for a week. I interpret this as evidence that they mated last week. After mating, the female turns on the male and eats him. He contributed sperm to fertilize her eggs, and then he gave (or she took) everything else that he had to nourish the eggs. This is not romance; this is efficient production of offspring.

Now the female is getting larger, for she is getting ready to deposit a single egg sac that will contain hundreds of eggs. She will attach the egg sac with silk threads in a safe place, probably the crevice between the brick wall and wooden ceiling where she has been sitting. Shortly after securing the egg sac, and certainly before the first hard frosts, she will die.

Eggs will overwinter in the egg sac, and development will proceed through the larval stages inside the eggs. Spiderlings, which look like miniature adults and are sexually immature, will emerge in spring. The large brood will be whittled down by cannibalism as the spiderlings emerge from eggs.

Survivors will wait for warm, breezy weather to release threads of silk to catch the wind and "balloon" spiderlings considerable distances — some will disperse many miles.

I hope that some will choose to set up residence on the porch that served their parents, for I enjoy my orb-weaving spiders.