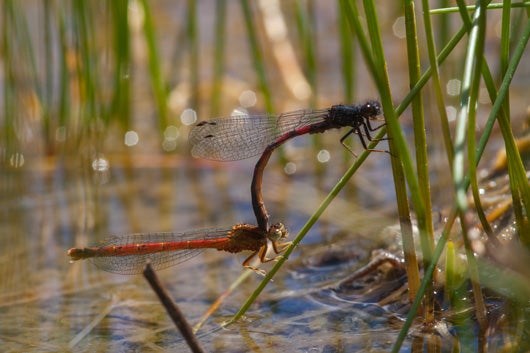 During summer, I frequently take my lunch while sitting on a stone wall overlooking Varsity Lake on the University of Colorado campus — it's an entertaining perch for a naturalist.

When compared to monkeys and apes and humans, dragonflies are ancient. The earliest common ancestor to primates lived 85 million years ago, but fossils of dragonflies were deposited 325 million years ago. Ancient dragonflies called "griffinflies" were enormous — their bodies were 17 inches long and their wingspans were 28 inches.

Among modern dragonflies, wingspan varies from 2/3 inch to 7 inches among the 3,000 extant species. If you are interested in identifying our local species, I highly recommend Ann Cooper's photographic guide Dragonflies of the Colorado Front Range, published by the Boulder County Nature Association.

Rampant promiscuity provides both opportunity and a dilemma for males.”

Dragonflies and damselflies have four wings, large compound eyes, and narrow, elongated bodies. Many dragonflies, such as the variegated meadowhawks that patrol Boulder's airspace in the evening, are visual predators hunting for insects on the wing. They have excellent vision, with about 30,000 hexagonal facets per eye, each forming an image. They have the traditional body segments of insects — head, thorax and abdomen, with the abdomen divided into 10 segments, labeled S1 to S10. S1 is adjacent to the thorax and S10 is the caboose (not an official anatomical term).

Have you seen dragonflies or damselflies clutching each other to form a circle? This is called a mating circle or mating wheel, though some hopeless romantics call it a heart. They typically assume this posture while perching, but if they are annoyed or threatened they can fly to a new perch without losing grasp of one another.

Mating for dragonflies and damselflies takes planning and coordination. While bent in a tight loop, males release sperm from segment S10 but transfer it to the copulatory organ, composed of a penis and a sack to hold sperm, on segments S1, S2 and S3.

This transfer has been referred to as "charging" the copulatory organ, a humorously fanciful metaphor suggesting a cannon or explosive device. The male then grasps the female with his claspers or cerci on S10 — dragonflies grasp a specialized plate behind the female's eyes, while the plate is on the thorax in damselflies, as in the photo. When she is ready to mate, she bends her abdomen to bring her genital opening, on her S10, in contact with his copulatory organ. Transfer of sperm is slow, so it is necessary to hold this position for several minutes.

The posture in the photo shows guarding behavior. If the male and female were to part ways immediately after mating, it is likely that she would mate again later that day or the next.

Rampant promiscuity provides both opportunity and a dilemma for males. The problem is that the male uses his penis first to scoop out sperm deposited by previous males and then insert his own sperm. If a male simply parts ways with the female after mating, then it is possible that his effort would be lost and her eggs would be fertilized by a subsequent male. To protect his reproductive effort and impending paternity, he sustains his grasp, guarding her and blocking the approaches of other males. The guarding lasts at least until she begins laying eggs, but he may stay with her until she finishes.

Jeff Mitton, mitton@colorado.edu, is a professor in the Department of Ecology and Evolutionary Biology at the University of Colorado. This column originally appeared in the Boulder Daily Camera.