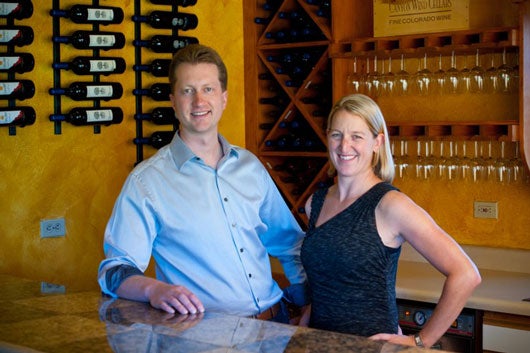 There’s so much chemistry in winemaking. From the time you bring in the grapes and for the entire life of the wine, you’re always checking on its sugar, acid, and flavors.”While her husband had been learning to tend grapes and make wine from a young age, she had a lot of ground to make up. In fact, before meeting him, she estimates, “I had probably had six glasses of wine in my whole life.”

Still, living on the Front Range during and after college made Christianson appreciate Colorado’s diverse food and beverage scene. Her CU degrees—she holds a B.A. in geology (1998) and an M.B.A. from CU-Denver (2003)—also prepared her for her unexpected career in wine-making. 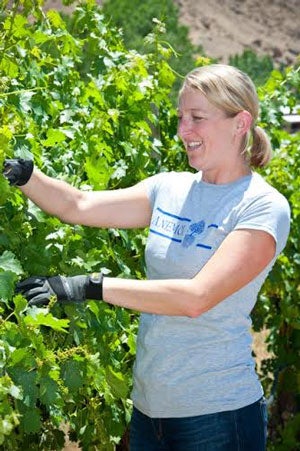 After receiving her B.A., Christianson worked for the U.S. Geological Survey, checking chemistry in groundwater for three years. In 2004, she began working as the development director for Ski & Snowboard Club Vail, where she met her husband. When they began dating shortly thereafter, she also began earnest exploration of wine.

When the couple married in 2010, they took over ownership of the family winery.

“My experience with chemistry has been very useful,” Christianson says. “There’s so much chemistry in winemaking. From the time you bring in the grapes and for the entire life of the wine, you’re always checking on its sugar, acid, and flavors.”

She’s had to learn more than just chemistry, including developing a sensory perspective and a palate for wine. She took a UC-Davis winemaking program online, and she reads constantly about wines. Christianson says her husband has been a good teacher. When she has questions, she refers to the winery’s consulting winemaker, Robert Pepi.

“I think you could probably study wine for five lifetimes and not learn everything,” Christianson remarks.

Her business degree has also helped her with branding and marketing. When she discovered a penchant for wine blends in 2009, Christianson developed a second label, Anemoi Wines. The Beverage Testing Institute rated the Anemoi Notus a 92 in 2012, while Wine Enthusiast gave it an 87 in 2014. In 2009, Canyon Wind Cellars released the 2007 IV, which sold as the first and only $100 bottle of wine produced in Colorado.

“We want to let the grapes and wine do the work,” Christianson explains.

The vineyards are planted with special Ephraim crested wheatgrass, which doesn’t require a lot of water.

When the Christiansons move wine from the winery into the cellar for barrel-aging, they use gravity flow, thus eliminating the need for a pump part of the time. Christianson says they use both all-natural, biodegradable corks and zero-carbon-footprint biopolymer corks. The vineyard crew maintains the vineyard and picks all grapes completely by hand.

As members of the Colorado Association of Viticulture and Enology, Christianson and her husband want to promote local agriculture and educate Coloradans—and others—about the state’s Western Slope wines.

“We have over 100 wineries in the state of Colorado. I think there are perceptions from long ago that Colorado wine is terrible. It’s just about getting in front of people and showing them we grow award-winning wines,” she says.

Christianson, who fell in love with CU—and Colorado—at the age of 16, loves spending time outside everyday checking the grapes in the vineyards.

“I’m so excited to be here, using the land,” she declares.” Since I stepped foot in Colorado, there’s nowhere else I’d rather be.”