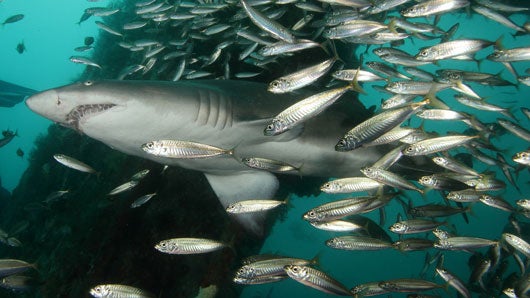 Sharks were a tolerant bunch some 50 million years ago, cruising an Arctic Ocean that contained about the same percentage of freshwater as Louisiana’s Lake Ponchatrain does today, says a new study involving the University of Colorado Boulder and the University of Chicago.

The study indicates the Eocene Arctic sand tiger shark, a member of the lamniform group of sharks that includes today’s great white, thresher and mako sharks, was thriving in the brackish water of the western Arctic Ocean back then. In contrast, modern sand tiger sharks living today in the Atlantic Ocean are very intolerant of low salinity, requiring three times the saltiness of the Eocene sharks in order to survive.

“This study shows the Arctic Ocean was very brackish and had reduced salinity back then,” said University of Chicago postdoctoral researcher Sora Kim, first author on the study. “The ancient sand tiger sharks that lived in the Arctic during the Eocene were very different than sand tiger sharks living in the Atlantic Ocean today.”

The findings have implications for how today’s sharks might fare in a warming Arctic region, which is heating up at about twice the rate of the rest of the planet due to increasing greenhouse gases, said CU-Boulder geological sciences Associate Professor Jaelyn Eberle, a study co-author. The potential consequences of warming in the Arctic include changes in freshwater runoff and atmospheric water vapor and decreases in salinity that can affect marine biology and seawater circulation dynamics.

“As more freshwater flows into the Arctic Ocean due to global warming, I think we are going to see it become more brackish,” said Eberle, also curator of fossil vertebrates at the University of Colorado Museum of Natural History. “Maybe the fossil record can shed some light on how the groups of sharks that are with us today may fare in a warming world.”

A paper on the subject was published online June 30 in the journal Geology. Other co-authors include David Bell from the University of Wyoming, Dewayne Fox from Delaware State University and Aspen Padilla, a CU-Boulder graduate who worked with Eberle as a master’s candidate. The study was funded in part by the National Science Foundation.

The new findings on Arctic Ocean salinity conditions in the Eocene were calculated in part by comparing ratios of oxygen isotopes locked in ancient shark teeth found in sediments on Banks Island in the Arctic Circle and incorporating the data into a salinity model. The team also compared its information to prior studies of sediment cores extracted from an oceanic region in the central Arctic Ocean called the Lomonosov Ridge -- a steep hump of continental crust that rises more than 1,000 feet from the ocean floor -- to estimate past environmental conditions in the Arctic Ocean.

“Oxygen isotopes in ancient bones and teeth reflect the water animals are living in or drinking,” said Kim, a former postdoctoral researcher at the University of Wyoming. “Because sharks are aquatic, the oxygen from the ocean is constantly being exchanged with oxygen in their body water, and that’s what is incorporated into their teeth. When I analyzed their isotopic composition, the numbers seemed weird at first because they indicated an essentially freshwater environment.”

The Eocene Epoch, which ran from about 56 to 34 million years ago, was marked by wild temperature fluctuations, including intense greenhouse periods when lush rainforests abounded in the Arctic. Previous studies by Eberle and colleagues showed the fauna there included ancestors of tapirs, hippo-like creatures, crocodiles and giant tortoises. Despite the six months of darkness each year, the terrestrial Arctic climate included warm humid summers and mild winters with temperatures ranging from just above freezing to about 70 degrees Fahrenheit.

“We now know a fair amount about the terrestrial animals and plants that were living in the Eocene Arctic greenhouse period,” said Eberle. “To finally get some data on the Eocene marine environment using these shark teeth will help us to begin filling in the gaps.”

Eberle said the Eocene Arctic Ocean was largely isolated from the global oceans. “Increased freshwater runoff from the land due to an intensified hydrologic cycle and a humid Arctic would have turned it more brackish pretty quickly,” she said.

Eberle and Kim said the early-middle Eocene greenhouse period from 53 to 38 million years ago is used as a deep-time analog by climate scientists for what could happen on Earth if CO2 and other greenhouse gases in Earth’s atmosphere continue to rise, and what a “runaway” greenhouse effect potentially could look like.

“Through an analysis of fossil sand tiger shark teeth from the western Arctic Ocean, this study offers new evidence for a less salty Arctic Ocean during an ancient ‘greenhouse period,’ ” says Yusheng “Chris” Liu, program director in the NSF’s Division of Earth Sciences, which co-funded the research with NSF’s Division of Polar Programs. “The results also confirm that the Arctic Ocean was isolated during that long-ago time.”