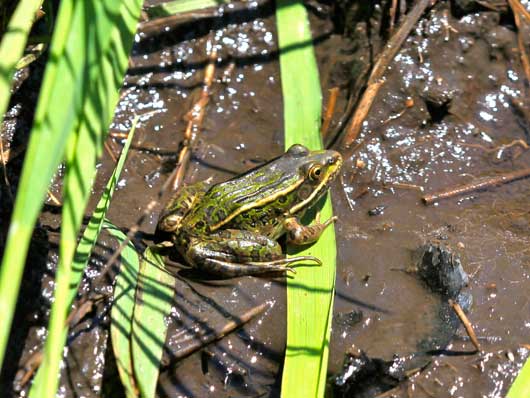 Northern leopard frogs survive winter at the bottoms of ponds and streams, which do not freeze. Click here for larger image. Photo By Jeff Mitton

On a wintry day, I visited a stand of ponderosa pines, but had to walk briskly to keep warm.

Chickadees and nuthatches flitted busily about, harvesting anything they could find. In my managed state of marginal misery, I thought that low temperatures and high winds surely threaten such small birds.

I came to a pond covered with ice and recalled how it was in summer, with frogs calling and hopping into the water when I approached. Today it was quiet and I tried to imagine where the frogs were and what they were doing.

Leopard frogs are typically found basking in shallow water or at the edge of a pond or lake. As fall transitions to winter, leopard frogs descend to the bottom of the pond and settle into the mud. Their metabolic rates slow as temperatures drop, so they need not surface to breathe, but absorb oxygen from the water through their skin.

Only the shallowest of ponds freeze to the bottom, so this strategy works well in Colorado, where ice comes and goes during the winter, but it also works well in northern Alberta, where ponds and lakes are covered with thick ice for the entire winter.

Wood frogs generally breed in ephemeral pools, rather than permanent ponds or lakes, and they venture far from breeding pools to occupy swamps, ravines and moist woodlands. Wood frogs overwinter in burrows excavated in soil, where winter temperatures drop considerably below freezing.

Wood frogs freeze in their burrows. Their hearts stop beating, their blood stops flowing and ice forms in the coelomic cavity and beneath the skin.

But they don't die. If a leopard frog freezes, it dies. How do wood frogs survive freezing?

Glycogen stored in the liver is broken down to glucose, which is distributed throughout the body, but becomes concentrated in the heart, liver, skeletal muscle and blood.

As the temperatures drop through fall, wood frogs begin to break down skeletal muscle to release nitrogen that is repackaged as urea — the compound normally released in urine.

But this urea accumulates in tissues and plasma, where it reduced the freezing point of tissues, balances osmosis and depresses metabolic rate, saving energy. Experimental studies have clearly demonstrated that the accumulated urea protects tissues from the damage following freezing.

In the dead of winter, 70 percent of the water in wood frogs freezes, most of it in the coelomic cavity and beneath the skin. The remainder, mixed with glucose and urea, remains as liquid syrup.

As water in the frog freezes, the heart stops and blood stops flowing. Experimental studies have kept frogs in this state for over four weeks, but in Minnesota, Manitoba and Alberta, I am guessing that frogs remain frozen for months.

In spring, when the burrow warms and the frog thaws, its heart starts spontaneously, blood begins to flow and the frog recovers coordination and resumes normal activities within 48 hours.

That frozen pond might have had both leopard frogs sitting in the mud beneath the ice and wood frogs lying frozen beneath the ground.

I find it fascinating that these closely related species have evolved such different strategies for enduring the cold of winter.