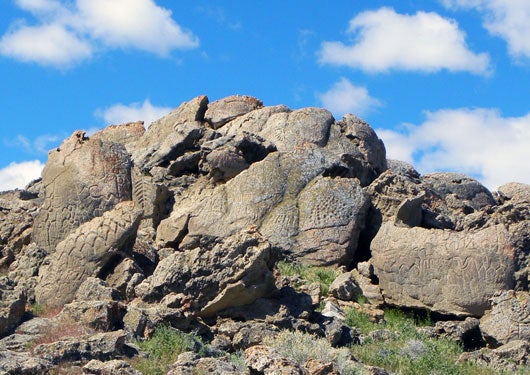 A CU-Boulder-led team has found that petroglyphs discovered in western Nevada date to at least 10,500 years ago, making them the oldest rock art ever dated in North America. Photo courtesy University of Colorado

A new high-tech analysis led by a University of Colorado Boulder researcher shows the oldest known petroglyphs in North America, which are cut into several boulders in western Nevada, date to at least 10,500 years ago and perhaps even as far back as 14,800 years ago.

The petroglyphs located at the Winnemucca Lake petroglyph site 35 miles northeast of Reno consist of large, deeply carved grooves and dots forming complex designs on several large limestone boulders that have been known about for decades, said CU-Boulder researcher Larry Benson, who led the new effort.  Although there are no people, animals or handprint symbols depicted, the petroglyph designs include a series of vertical, chain-like symbols and a number of smaller pits deeply incised with a type of hard rock scraper.

Benson and his colleagues used several methods to date the petroglyphs, including determining when the water level the Winnemucca Lake subbasin—which back then was a single body of water connecting the now-dry Winnemucca Lake and the existing Pyramid Lake—reached the specific elevation of 3,960 feet.

The elevation was key to the study because it marked the maximum height the ancient lake system could have reached before it began spilling excess water over Emerson Pass to the north. When the lake level was at this height, the petroglyph-peppered boulders were submerged and therefore not accessible for carving, said Benson, an adjunct curator of anthropology at the University of Colorado Museum of Natural History.

A paper on the subject was published this month in the Journal of Archaeological Science. Co-authors on the study included Eugene Hattori of the Nevada State Museum in Carson City, Nev., John Southon of the University of California, Irvine and Benjamin Aleck of the Pyramid Lake Paiute Tribe Museum and Visitor’s Center in Nixon, Nev. The National Research Program of the U.S. Geological Survey funded the study.

According to Benson, a white layer of carbonate made of limestone precipitated from the ancient, overflowing Winnemucca Lake had coated some of the petroglyph carvings near the base of the boulders. Previous work by Benson showed the carbonate coating elsewhere in the basin at that elevation had a radiocarbon date of roughly 11,000 years ago.

“Prior to our study, archaeologists had suggested these petroglyphs were extremely old,” said Benson, also an emeritus USGS scientist. “Whether they turn out to be as old as 14,800 years ago or as recent as 10,500 years ago, they are still the oldest petroglyphs that have been dated in North America.”

While Native American artifacts found in the Lahontan Basin—which encompasses the Winnemucca Lake subbasin—date to the time period of 11,300 to 10,500 years ago, it does not rule out the possibility that the petroglyphs were carved as early as 14,800 years ago, Benson said.

The oldest dates calculated for the Winnemucca Lake petroglyph site correspond with the time frame linked to several pieces of fossilized human excrement found in a cave in Oregon, said Benson, who also is affiliated with CU’s Institute of Arctic and Alpine Research.  The caves, known as the Paisley Caves in south central Oregon, held not only fossilized human coprolites that dated to roughly 14,400 years ago, but also bones of horses and camels that went extinct in North America prior to 13,000 years ago.

The younger time interval calculated for the Winnemucca petroglyphs corresponds to dates obtained from a second significant archaeological finding in the region—Spirit Cave Man, who was discovered more than 70 years ago some 60 miles east of Reno and whose hair, bones and clothing were dated to about 10,600 years ago. The remains of the man, who was found partially mummified in a shallow grave in Spirit Cave, Nev., were discovered with a fur robe, a woven marsh plant shroud and moccasins.

Petroglyphs near Long Lake in central Oregon—which were previously thought to be the oldest examples of rock art in North America—share similar features with some of the rock art the Winnemucca site, said Benson.  At least one of the petroglyph panels from Long Lake was buried by ash from an eruption of the nearby Mount Mazama volcano roughly 6,700 years ago, proof that it was carved sometime before the eruption.

“We have no idea what they mean,” Benson said of the Winnemucca Lake petroglyphs.  “But I think they are absolutely beautiful symbols.  Some look like multiple connected sets of diamonds, and some look like trees, or veins in a leaf. There are few petroglyphs in the American Southwest that are as deeply carved as these, and few that have the same sense of size.”

Benson obtained permission to non-invasively examine the petroglyphs from the Pyramid Lake Paiute Tribe, which owns the land. Study co-author John Southton, a faculty member at University of California, Irvine, radiocarbon dated the material for the study.