Warts on an unconcerned toad advertise its defenses 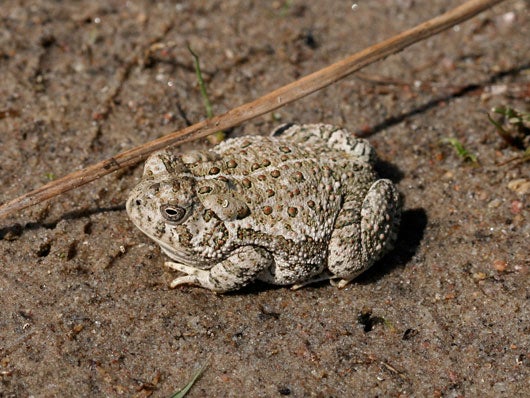 This handsome animal is a Woodhouse's toad, suitable neither for kissing or eating, in the case of humans. Photo by Jeff Mitton.

On a trip to the Sand Hills of Nebraska, I passed through the Crescent Lake National Wildlife Refuge and passed some time talking to a toad.

I had stopped at Island Lake, where a small boardwalk extends out into the reeds, affording a good view of ducks, geese, muskrats and all the birds that nest or hunt in the reeds. In mid-June, the quiet shallow water was carpeted with tadpoles, a sight that had been common in the past, a sight that I have missed. I sat down on the edge of the boardwalk to watch the tadpoles when I noticed a toad nearby.

This handsome animal was a Woodhouse's toad, Bufo woodhousii. I stealthily moved to get a photo, then got closer for a better shot. The toad sat placidly, unconcerned by my presence or my antics. So I sat down next to the toad to admire it.

The toad was about 4 inches long, with short extremities and a generous girth --clearly not built for speed. Its background color was light grey, with darker grey on the back, a white mid-dorsal stripe and white feet. Numerous warts covered the back, and each wart was tipped with red. Behind the prominent eyes were cranial ridges and behind them a pair of conspicuous bulges called parotid glands. The pupils were horizontal slits, and the mouth was enormous.

When I first saw the tadpoles, I assumed that they would grow into frogs. But now it dawned on me that the tadpoles might grow into Woodhouse's toads. With the benefit of further research, I conclude, from their solid black color, dense aggregations and habit of lying listlessly in shallow water in full sun, that they were toad tadpoles.

What is the difference between frogs and toads?

Frogs live and breed in the water, venturing onto dry land only to bask in the sun and snag insects. Frogs have much longer and more powerful legs so that they can truly jump. The skin of frogs is generally smooth and moist.

Toads have shorter legs that limit their locomotion to short hops or a slow walk. Their skin is dry, and their dorsal surface has numerous warts. Toads must return to water to breed, but they are much more terrestrial than frogs. Having said all of that, frogs and toads are members of the order Anura, meaning "without tails," and are called frogs. So all toads are frogs.

In my mind, the most salient feature in the trivial and inconsequential distinction between frogs and toads is that frogs exhibit escape behavior, while toads do not. My companion on that June day made no effort to move away, and for good reason. Frogs must flee from virtually everything -- birds, mammals, snakes and lizards -- because they are edible and defenseless. Toads need not flee because they are inedible, by virtue of an arsenal of poisonous compounds.

Immense parotid glands and numerous warts are reservoirs and dispensers of bufotoxins, a single name referring to a diverse array of noxious, poisonous and potentially lethal defensive compounds synthesized by toads. If a naive poodle, raccoon or coyote picks up a toad, the parotid glands release white mucous, which immediately interacts with the mucous membranes of the mouth, causing the predator to drop the toad. Each year, dogs are killed by such brief exposures to toads.

One predator is immune to bufotoxins and gobbles Woodhouse's toads with impunity. The western hog-nosed snake, Heterodon nasicus, feeds on many amphibians and feasts on the toads that make little or no attempt to flee. Their ability to tolerate or dismantle the toxins provides them access to an abundant, uncontested food source.

Hog-nosed snakes are immune to bufotoxins, but you are not. There is nothing to be gained by kissing a toad; I don't recommend it.

Jeff Mitton (mitton@colorado.edu) is a professor in the Department of Ecology and Evolutionary Biology at the University of Colorado Boulder. This column originally appeared in the Boulder Camera.