The complex life cycle of a checkered beetle 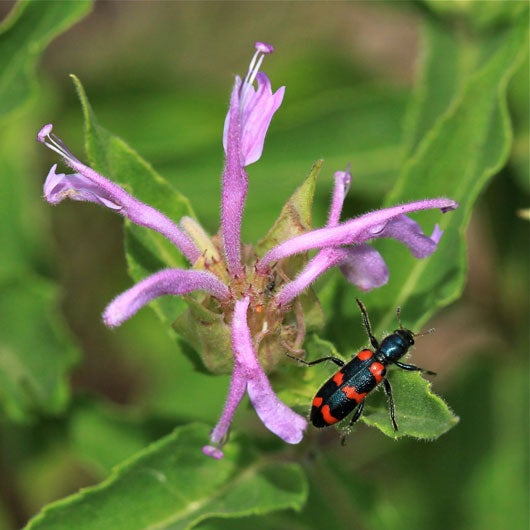 It seems that our exceedingly dry early summer dramatically reduced the extent and density of flowers and the abundance of flower-visiting insects.

I had found a small population of flowering wild bergamot, Monarda fistulosa, and yearning the company of insects I sat down to see what would come by.

Northwestern fritillaries, Speyeria hesperis, were the most conspicuous as they moved from flower to flower, but they were outnumbered by several species of skippers. A goldenrod crab spider had captured a fritillary and was slowly draining everything that could be digested to liquid. The spider predation was fascinating, but then several colorful beetles captured my attention.

Red-blue checkered beetles, Trichodes nuttalli, were foraging intently on the scraggly Monarda flowers. They were indifferent to my presence, so I was able to watch them closely. They are slender beetles, slightly more than a half-inch long, with a dense layer of white hairs projecting from all body parts. Their background color is iridescent blue-black, contrasting with three pairs of red bars that almost meet at the center of the elytra or wing covers.

The conspicuous coloration and indifference to my presence made me suspect that they had some sort of defense that I would rather read about than experience, but I found nothing about chemical defense in the literature.

The checkered beetles were eating pollen, but they were also inspecting other parts of the flower. I didn't think much about it then, but now I see that I was missing their other activity. Close inspection of photos reveals a pearl-white egg.

Red-blue checkered beetles lay eggs in flowers where other pollinating species, particularly bees and wasps, bump into them. The eggs adhere to bees and wasps and are inadvertently carried back to the beehive or wasp nest.

When the eggs hatch into larvae in the hive, the larval checkered beetles feast on the larvae of bees or wasps surrounding them. Thus, they enjoy a larval life surrounded by food and devoid of predators.

As adults, they eat the pollen from a variety of flowers, and they prey on a multitude of insects smaller than themselves. Checkered beetles are in the family Cleridae, a group with 3,500 species worldwide and about 500 species in North America. A substantial proportion of them are flower visitors that eat pollen and smaller insects, but many are associated with forest trees and eat larval or adult bark beetles.

The life cycle of red-blue checkered beetles is somewhat specialized, in that they rely on other species to transport their eggs to a hive or nest to feed. These checkered beetles are not highly specialized, for they do not rely on a single species for larval feeding; honeybees and a variety of solitary bees and wasps take the beetle eggs to their hives. While this interaction with other species is fascinating to us, and no doubt of advantage to the checkered beetle either right now or in the past, it is a bit of a gamble, in an evolutionary sense.

Evolutionary success can be assessed several different ways: geographic range of the species, the number of habitats occupied, abundance, the number of descendant species produced, and longevity of the species. Generally speaking, specialist species tend to go extinct more quickly than generalists.

The reliance on one or more other species to complete the life cycle necessarily increases vulnerability to extinction because if any of the interacting species goes extinct or becomes rare, the specialist cannot finish its life cycle and suffers extinction.

Has the red-blue checkered beetle evolved a perilous reliance? The bees and wasps that inadvertently help the beetles could precipitate its extinction by becoming more hygienic. If the bees and wasps learned to kill the beetle larvae in the hive, or simply evict them, or learn to remove eggs before entering the hive, red-blue checkered beetles would disappear.