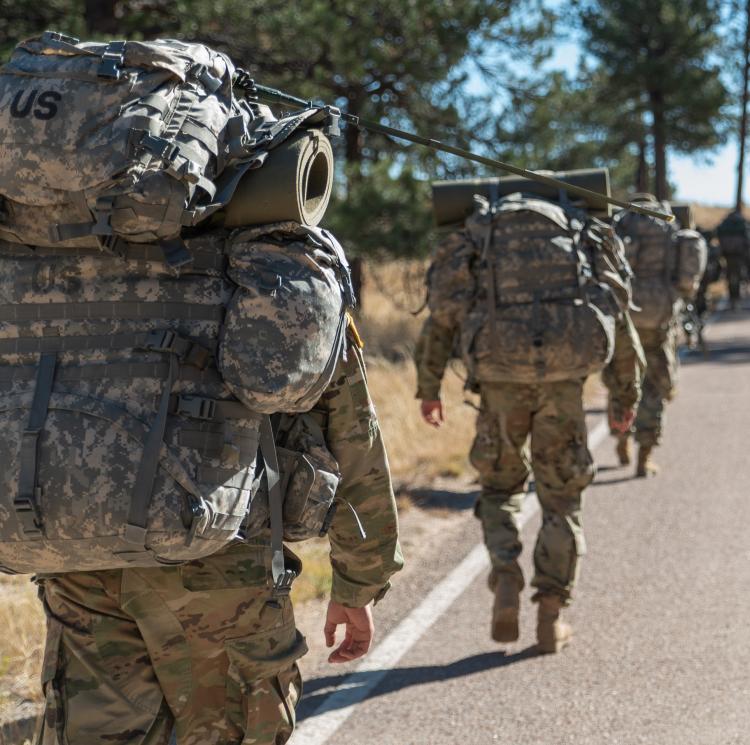 Cadets from the Golden Buffalo Battalion move their equipment to conduct their Patrol Base operations. Photo courtesy of Cadet Arianna Decker.

Nearly 100 Army ROTC Cadets from 7 universities within the Golden Buffalo Battalion converged onto Jack’s Valley at the U.S. Air Force Academy, October 15 to 17 for their annual fall Field Training Exercise (FTX). During this three-day event, the Cadets faced numerous obstacles and challenges that tested the skills they have learned up to this point.

AROTC units from other campuses attended the training exercise as well. But each unit completed each part of the training separately. As to be expected, the weather played a key role in the weekend’s events. The day’s highs ranged from 48° up to 68°, with the evening’s dipping down into the low 30’s°. 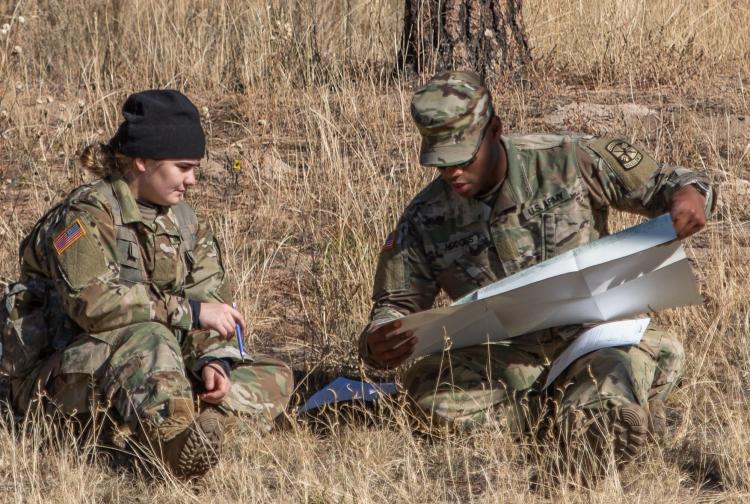 The Cadets arrived at 1100 on the 15th and immediately began land navigation testing, including written test, day course and a night course. Day one ended at 2300 (11:00 p.m.) after mealtime and a briefing from senior Cadet leaders and Cadre. Day two began with a 0500 wakeup call and delicious MREs for their breakfast meal.

The FTX is a mandatory requirement handed down from Cadet Command to each battalion to carry out. The senior level Cadets are in-charge-of executing and planning out the majority of the daily maneuvers and tactics for the entire event. They start the planning process at the beginning of the semester and work together to iron out all of the kinks. This opportunity to coordinate these types of movements for the event gives the senior’s the necessary practice and knowledge to lead and plan a large-scale operation. 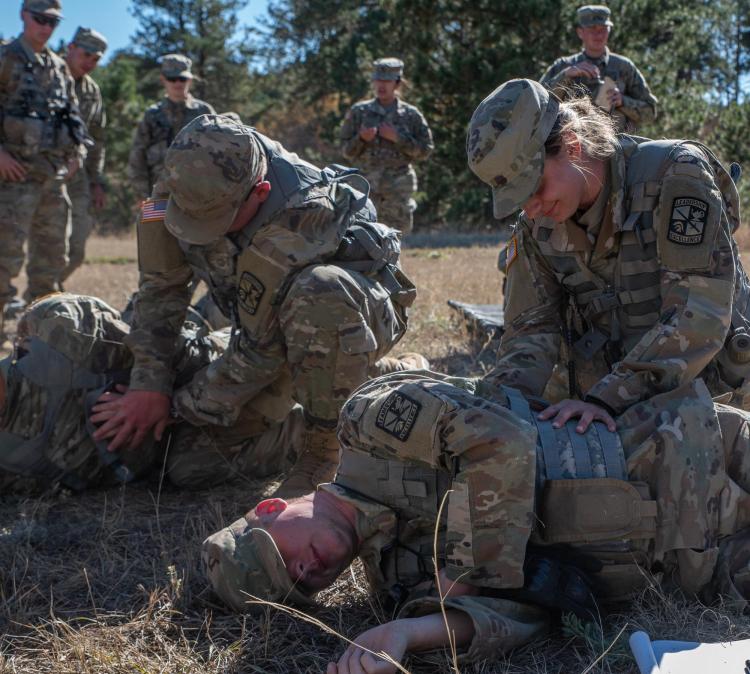 Throughout the weekends’ activities, Cadets moved between several missions and tactical lanes. They took part in activities at the squad and platoon level. They participated in events such as:
•    Land navigation: written, day and night
•    Maneuvering through an obstacle course
•    Intro to tactics (individual movement techniques, squad movement techniques and react to ambush)
•    Administering medical/combat care (Tactical Combat Casualty Care)
•    Intro to radio use on tactical radios
•    Basic rifle marksmanship training on a digital platform/learning system using smokeless rifles

Cadets had to navigate through various terrain types and deal with different features like thick underbrush and thorn bushes. Cadets were faced with multiple challenges and were given the opportunity to use the tools they have learned to conquer those challenges. 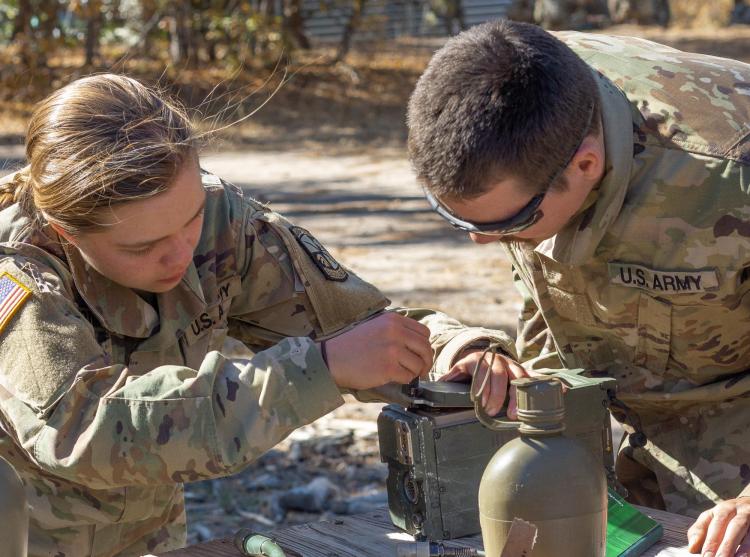 The main purpose of conducting an FTX is to prepare the MSIII Cadets for their required attendance at the Army ROTC advanced camp during the summer before their senior year. The thirty-seven-day training camp is designed to evaluate a Cadet’s ability to display their proficiency in basic leadership tasks. The training is conducted in a grueling and stressful environment which is meant to mimic the conditions of normal military ground operations or deployment. 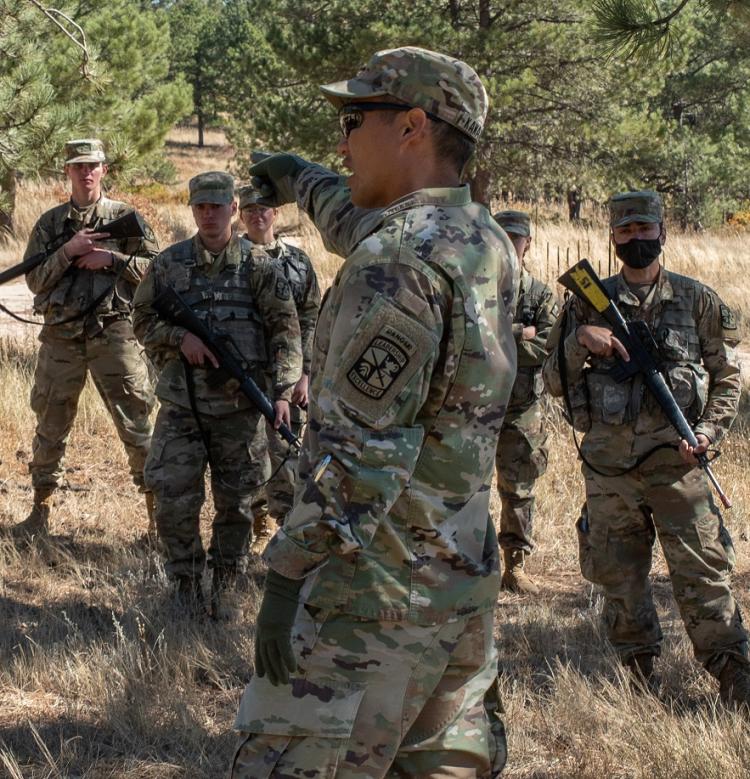 The training received at the field training exercise (FTX) goes hand-in-hand with the maneuvers being evaluated at advanced camp. Cadets use the same type of gear that regular active U.S. Army soldiers are equipped with. Cadets are fully suited up in their OCPs (Operational Camouflage Pattern), combat boots, FLC vests (fighting load carrier), and full rucksacks. This is their typical gear that they train with on a weekly basis.

Cadets use replica guns, called “rubber ducks”, that look and feel like the real deal. The only time they handle and fire an actual live weapon is at an official shooting range where they adhere to strict procedural regulations. Cadets will be able to experience live shooting during our “Superlab” in February 2022. 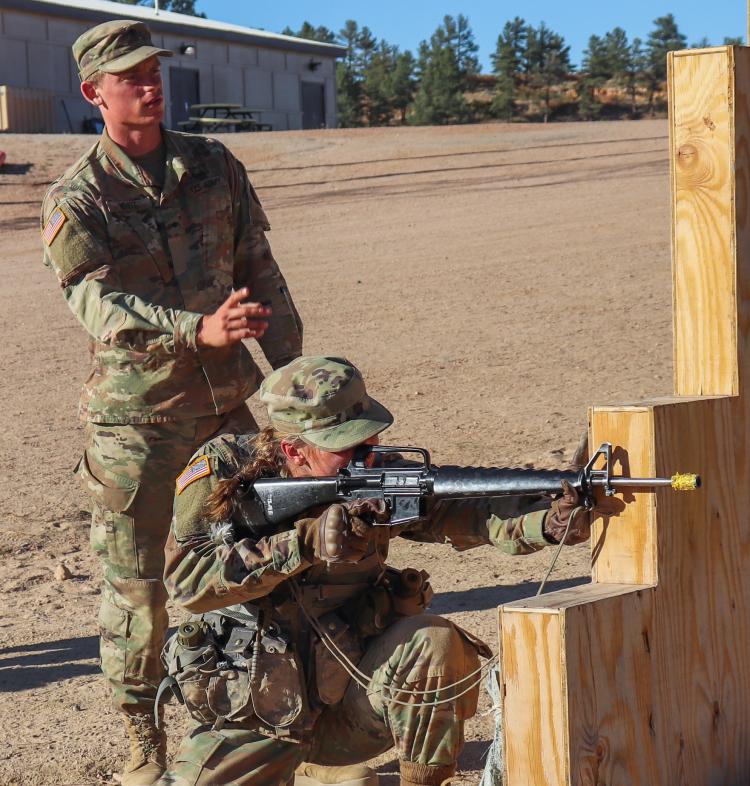 While senior Cadet leaders are running the show, all Cadre are also on hand to continuously monitor and evaluate the Cadets throughout the weekend. Officers part of the Army’s Advanced Civil Schooling program were in attendance to lend support where needed.

The end goal of the weekend’s training event is to build confidence in each Cadets skill base and boost morale within the ranks. Leading the Cadets to work as a cohesive unit on and off the field. As Cadets attend these exercises each semester and develop their skills, they should gain the knowledge and leadership tactics necessary for when they eventually commission as officers in the United States Army as Second Lieutenants.

Congratulations to each of you for the hard work and dedication you showed this past weekend. 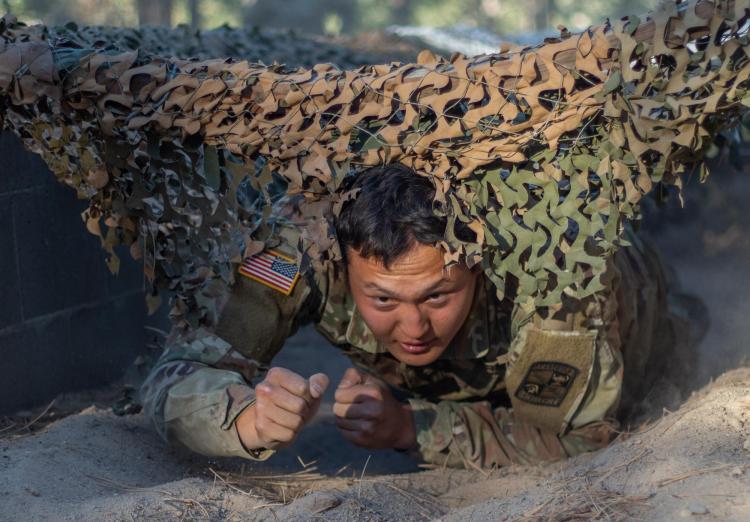 A Charlie Company Cadet works his way through the tunnel crawl section of the obstacle course. Photo courtesy of Cadet Arianna Decker. 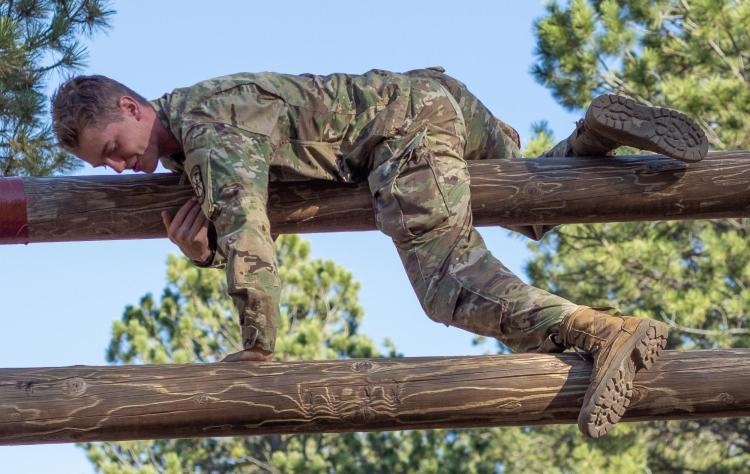 Cadet Kowalczyk successfully transitions over the top of the confidence climb in the obstacle course. Photo courtesy of Cadet Arianna Decker.