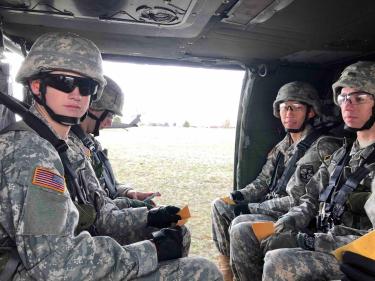 On 20 April, 2018, more than 130 Cadets from the Golden Buffalo Battalion battled weather, sleep exhaustion, and tough terrain to conduct platoon tactical operations as a part of the Spring 2018 culmination field training exercise. The arduous but rewarding three day field exercise at the US Air Force Academy prepared Cadets at all levels on patrol base operations, movement to contact, raid, ambush, reconnaissance, as well as the planning and execution of the Army operations order. Additional highlights during training included Cadet movement in in UH-60 Black Hawks and realistic casualty treatment and transport while in contact with the oppositional forces.