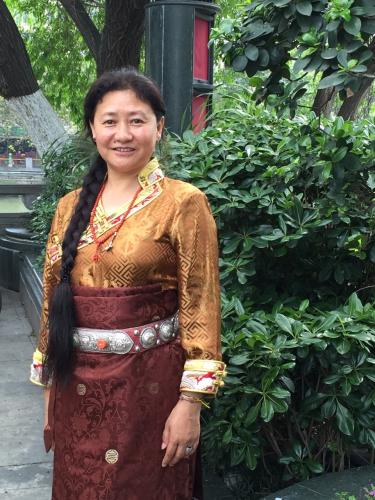 Padma 'tsho (Baimacuo) is Professor in the Philosophy Department of Southwest University for Nationalities in Chengdu, China. She holds a Ph.D. from Sichuan University in Chengdu and M.A. from Central Nationalities University in Beijing. She was an Instructor at Front Range Community in 2016-2017. She has published about 50 articles in several languages and two books. Her areas of research and teaching include Tibetan Buddhism, ritual, and culture, as well as the education of Buddhist nuns in Tibetan areas. Her articles have appeared in edited volumes, such as Eminent Buddhist Women, edited by Karma Lekshe Tsomo; Voices from Larung Gar, edited by Holly Gayley; and numerous journals, including Religions, Contemporary Buddhism, China Tibetology, Journal of Ethnology, Sichuan Tibetan Studies, and Asian Highlands Perspective. In the last decade, Professor Padma 'tsho has spent time at several North American universities as a Visiting Research Scholar, including Harvard, Columbia, University of Virginia, and CU Boulder.