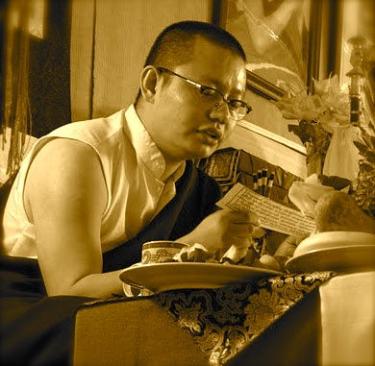 Lhoppön Rechung began his religious training at the age of five at Palyul Chö Khor Ling monastery. There, he trained until the age of fourteen under Lama Chöying Gyamtso, a Kagyu lama. From the age of fourteen to eighteen, he studied at the Sakya Dzongsar Institute under Khenpo Kunga Wangchuk, after which he spent two years at the Gelug Drepung University. At the age of twenty, Lhoppön Rechung Rinpoche entered the Nyingmapa Namdroling Shedra, where he studied for nine years. Since 2001, Lhoppön Rechung has worked tirelessly to establish Mipham Shedra in Boulder, Colorado, as well as been invited to teach at a number of Buddhist centers across the United States. In addition to Buddhism, he is passionate about the preservation of the Tibetan language. In this capacity, he has taught privately and at institutions of higher education. Since 2010, he has taught the DILS Tibetan class at CU Boulder.