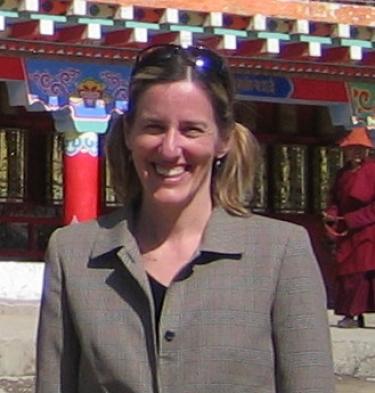 Holly Gayley, Associate Professor in the Department of Religious Studies, conducts research on the revitalization of Buddhism on the Tibetan plateau with special interest in gender in hagiographic literature; ritual, ethics and identity politics; and Buddhist modernism. Her current research focuses on an emerging ethical reform movement in eastern Tibet, spearheaded by cleric-scholars at Larung Buddhist Academy in Serta, and her recent publications on the topic include: "Reimagining Buddhist Ethics on the Tibetan Plateau (Journal of Buddhist Ethics, 2013) and "The Ethics of Cultural Survival: A Buddhist Vision of Progress in Mkhan po 'Jigs phun's Advice to Tibetans of the 21st Century" in Mapping the Modern in Tibet (International Institute for Tibetan and Buddhist Studies, 2011). Her first book titled, Love Letters from Golok: A Tantric Couple in Modern Tibet, came out in November 2016 with Columbia University Press. The book explores the life and letters of the treasure revealers, Khandro Tāre Lhamo and Namtrul Jigme Phuntsok, who played a significant role in the revitalization of Buddhism in the Tibetan region of Golok.