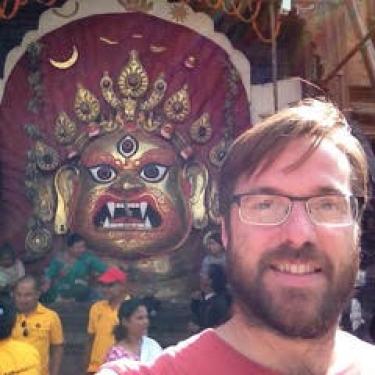 Adam Krug completed his Ph.D. in Buddhist Studies and South Asian Religions in the Department of Religious Studies at the University of California, Santa Barbara. His current research focuses on the Grub pa sde bdun or Seven Texts on Siddhi, a corpus of Indian tantric treatises from seven mahāsiddhas extant in Sanskrit and Tibetan that are recognized as one of the oldest corpuses of Indian mahāmudrā works. This research traces the implications that these texts hold for the development of Vajrayāna Buddhism in India, their transmission to Tibet and formulation as a unified corpus, the role that these and the other works from the 7th Karmapa Chödrak Gyatso's three volume collection of Indian Mahāmudrā Works (Phyag chen rgya gzhung) played in the Tibetan mahāmudrā polemical debates of the fourteenth to seventeenth centuries, and their continued importance in the modern Drikung and Karma Kagyü lineages. His recent publication on "Pakpa's Verses on Governance in his Advice to Prince Jibik Temür" presents what is likely the Sakya patriarch Pakpa Lodrö Gyaltsen's earliest composition on the topic of the 'dual system of governance' (tshul gnyis). His works in progress include a study of the issue of ineffability in the context of tantric ritual as presented in the core corpuses of "Indian Mahāmudrā Works" for a forthcoming volume on Buddhism and Linguistics, an article on the Grub pa sde bdun in Tibetan mahāmudrā polemical literature, and a contribution to a collected volume on Yoga and Pop Culture on meditation, Tibetan Buddhism, and yogic powers in David Lynch's Twin Peaks and its relationship to the imagination of Tibetan Buddhism in American pop culture in the 1990s. He currently teaches Religious Studies courses in the Interdisciplinary Program at the University of Memphis.