Kenneth Bauer on "Charting the Outlines of a Tibetan Cartography" | Nov 15th at 3:30pm 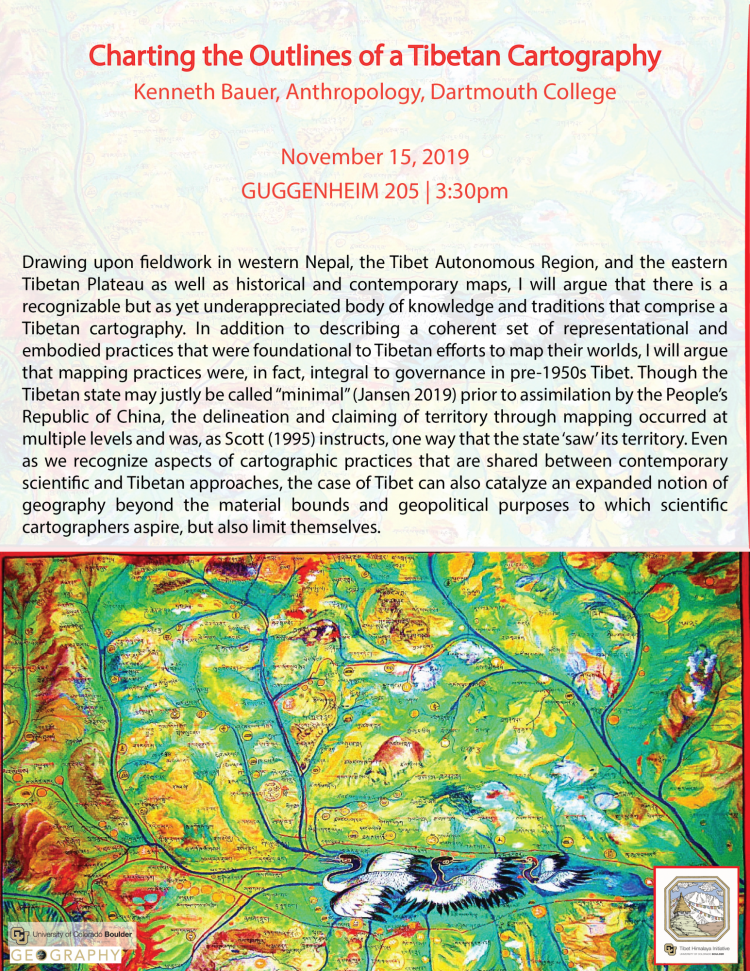 Please join us for a Geography colloquium with Dr. Kenneth Bauer on November 15, Friday, at 3:30pm in Guggenheim 205. The title of his talk is Charting the Outlines of a Tibetan Cartography.

Abstract
Drawing upon fieldwork in western Nepal, the Tibet Autonomous Region, and the eastern Tibetan Plateau as well as historical and contemporary maps, I will argue that there is a recognizable but as yet underappreciated body of knowledge and traditions that comprise a Tibetan cartography. In addition to describing a coherent set of representational and embodied practices that were foundational to Tibetan efforts to map their worlds, I will argue that mapping practices were, in fact, integral to governance in pre-1950s Tibet. Though the Tibetan state may justly be called “minimal” (Jansen 2019) prior to assimilation by the People’s Republic of China, the delineation and claiming of territory through mapping occurred at multiple levels and was, as Scott (1995) instructs, one way that the state ‘saw’ its territory. Even as we recognize aspects of cartographic practices that are shared between contemporary scientific and Tibetan approaches, the case of Tibet can also catalyze an expanded notion of geography beyond the material bounds and geopolitical purposes to which scientific cartographers aspire, but also limit themselves.

Bio
Dr. Kenneth Bauer is a Senior Lecturer in the Department of Anthropology at Dartmouth College. He teaches courses on environment and development issues, with a regional focus on Tibet and the Himalaya, and thematic interests in state-society relations, biodiversity conservation, and climate change. Among his research interests are resettlement and urbanization in Tibetan nomad areas of China and community development in the Himalayas. Dr. Bauer has more than 20 years of experience as a consultant for a variety of organizations including the US Forest Service, UNDP, USAID, TetraTech, and Winrock International. He earned a BA from Brown University, an MSc from University of California-Berkeley, and a DPhil degree from the University of Oxford. Dr. Bauer is also a Program Manager at the Dickey Center for International Understanding at Dartmouth College.