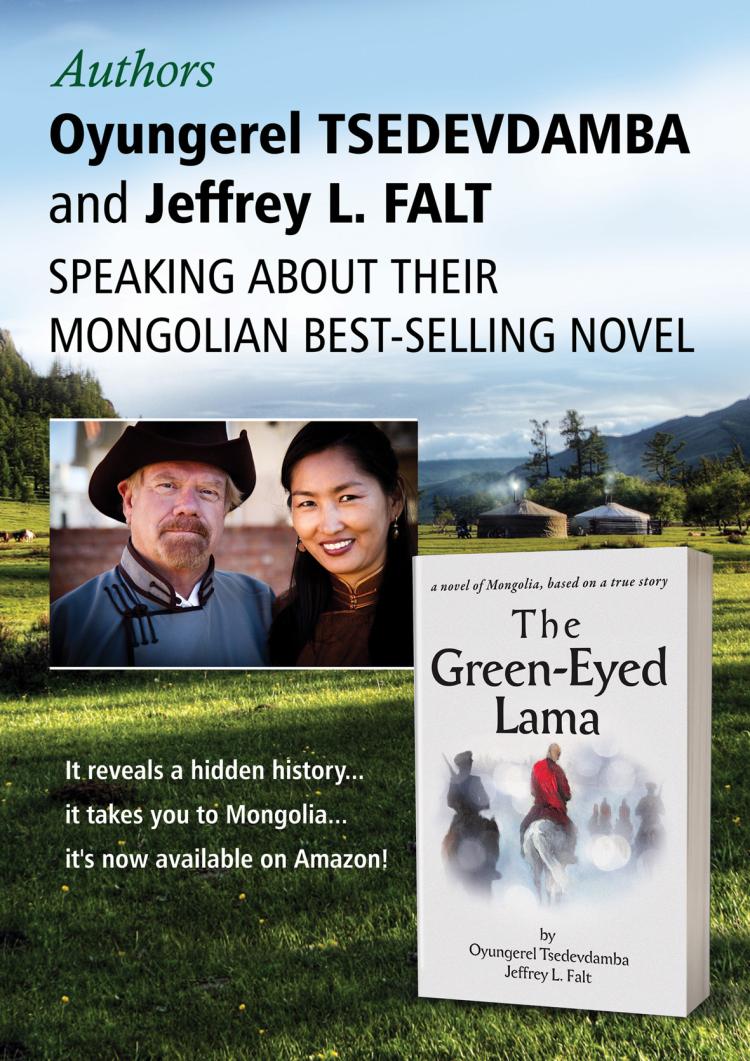 Oyungerel grew up with her herder family in the Hogsvol countryside. She, like many Mongolians, learned about life during the Communist regime and the purges of the 1930s from relatives’ stories. The combination of personal connections and research of this era have grounded the writing that she and her husband, Jeff, have done about the Communist period of Mongolian history. Their series of four books – the Guardian quartet – tells the story of life in Mongolia from the 1930s to the 1989-90 revolution -- the birth of today’s democracy.

Their first historical novel, The Green-Eyed Lama (2008), was released in English in the U.S. in 2018 following a decade of record-breaking sales and awards in Mongolia. It chronicles the budding romance between Sendmaa, a young belle in the countryside, and Baasan, a monk in the lamasery, as they try to cope with the turmoil of the Stalinist purge, terrible massacres and mass executions of thousands of innocent lamas and laymen alike. The second book in the series, Sixty White Sheep (Жаран цагаан хонь), was published in 2017 is also a bestseller, setting records on the Mongolian market.

Join us for an illustrated lecture to learn about this fascinating country, its recent history under Communist rule and the impact of the purge on daily life and the Buddhist religion in Mongolia.

Short Bio of Authors of the Green Eyed Lama:

OYUNGEREL TSEDEVDAMBA grew up a herder girl in Communist Mongolia. She received a scholarship to study planning economy in the USSR and, after the fall of communism, she earned a Master’s Degree in Market Economy in Russia. She subsequently received a Master’s Degree from Stanford University where she was a Fulbright Fellow. Oyungerel is an Eisenhower Fellow and a World Fellow of Yale University. From 2000 to 2004 she headed Liberty Center, at that time Mongolia’s most active human rights organization. She later served as Adviser to the Prime Minister of Mongolia and subsequently to the President of Mongolia on human rights and civic participation. In 2010 Oyungerel was elected president of the 90,000 member Democratic Women’s Union. In 2012 she won election to Mongolia’s Parliament and was appointed Minister of Culture, Sports and Tourism. In 2015 Oyungerel was awarded the Chevalier de L'ordre des Arts et des Lettres by the Ministry of Culture of France for her efforts to end the death penalty in Mongolia and for her work in preserving and protecting Mongolia’s cultural heritage including the much-publicized Tyrannosaurus bataar case. Oyungerel is the author of 11 books and co-author of three with Jeffrey. Jeff and Oyuna live in Ulaanbaatar.

JEFFREY L. FALT is an attorney with a Bachelor’s Degree, a Master’s Degree and a Doctor of Jurisprudence from the University of California at Berkeley. Following a stint as a legal aid attorney in rural California he turned to human rights law, court reform and access to justice for marginalized communities in developing countries with The Asia Foundation, Amnesty International, the American Bar Association, USAID and numerous other international organizations in Africa, Asia and Latin America. He worked in Liberia during the oppressive rule of Charles Taylor; in East Timor during the UN Mandate; in Nepal while the Maoist rebellion had nearly surrounded Kathmandu; and in Sri Lanka monitoring a fragile ceasefire in rebel held areas during the Tamil uprising. With an armed escort Jeffrey and his brother were among the first foreign visitors to Angkor Wat in Cambodia while the Khmer Rouges still roamed the countryside and mined the temples. Jeffrey taught at the Graduate Program in Pacific Basin Studies at Dominican University. His journal article, “Legal aid and the Empowerment of the Poor in Developing Countries” became a teaching tool and a call to action. Jeffrey met Oyungerel in 2000 while on a peaceful assignment in Mongolia. They married in 2004.