Colloquium with Michael Jerryson on "Justifying Violence in a Buddhist World" at 2pm on Tuesday, March 19th 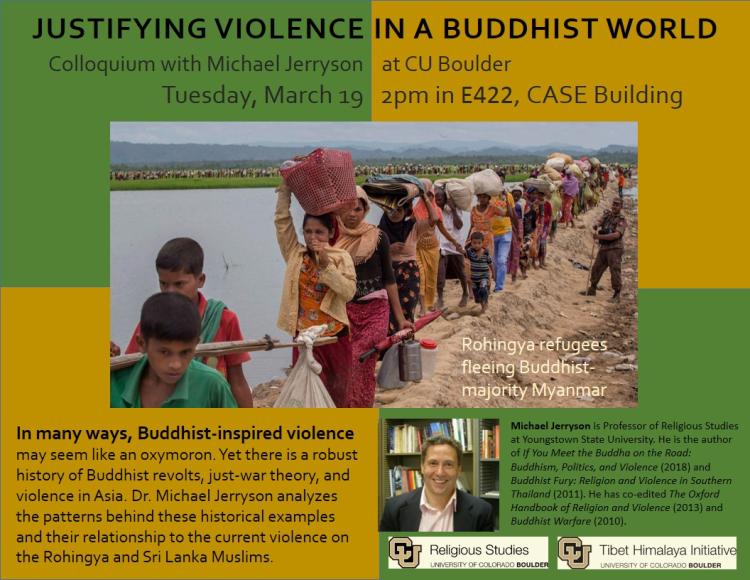 Please join us for a colloquium with Michael Jerryson, a leading theorist on religion and violence and specialist in historical understandings and contemporary examples of Buddhist violence in Southeast Asia. The colloquium will take place at 2pm on Tuesday, March 19th in E422 in the new CASE building on the CU Boulder campus. Light refreshments served. Co-sponsored by the Department of Religious Studies and Tibet Himalaya Initiative.

In many ways, Buddhist-inspired violence may seem like an oxymoron. Yet there is a robust history of Buddhist revolts, just-war theory, and violence in Asia. Dr. Michael Jerryson analyzes the patterns behind these historical examples and their relationship to the current violence on the Rohingya and Sri Lanka Muslims.

Michael Jerryson is Professor of Religious Studies at Youngstown State University. His research interests pertain to religion and identity, particularly with regard to gender, race, and class. He is the author of Buddhist Fury: Religion and Violence in Southern Thailand (2011) and he has co-edited The Oxford Handbook of Religion and Violence (2013) and Buddhist Warfare (2010). His latest publication is If You Meet the Buddha on the Road: Buddhism, Politics, and Violence (2018), and he is working on a forthcoming edited volume, tentatively entitled: Buddhist-Muslim Relations in a Theravada World.