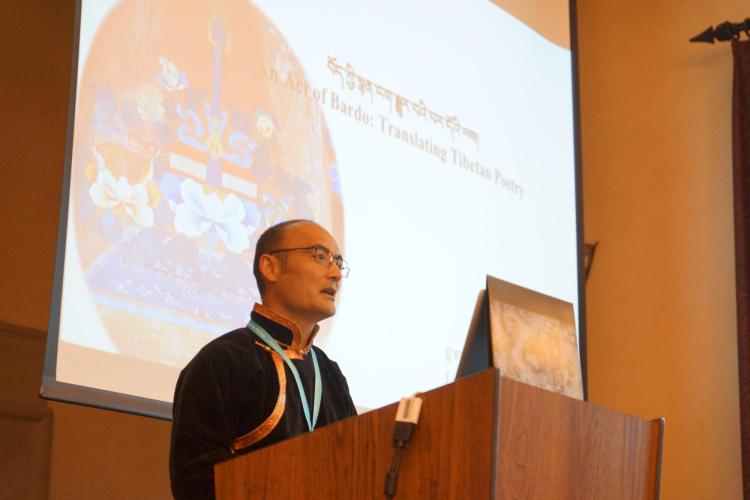 Over the long weekend of October 5-8, the Tibet-Himalaya Initiative had the honor of hosting the first Lotsawa Translation Workshop at the University of Colorado Boulder.

Made possible through the generous support of the Tsadra Foundation, the Lotsawa Workshop drew fifty-five scholars and translators from across the country and around the globe to join together in a set of conversations about the translation of Tibetan texts. The theme for this inaugural event was Tibetan songs (mgur) and the dynamics of devotion. How do we capture meter, verse, tone, and affect when translating rhetorically rich Tibetan verses into English? Where should our allegiance as translators lie—to accessibility for the reader, the style and form of original text, or in something else? What theoretical and methodological considerations imbue the act of translation? These and other questions invigorated conversations in panels and breakout sessions throughout the weekend.

Building on Tsadra's series of Translation and Transmission conferences in 2014 and 2017, the innovation of the Lotsawa Workshop was its model of workshopping translations-in-process, which emerged from a dialogue between co-organizers Holly Gayley and Dominique Townsend. In small groups of eight, junior translators, graduate students, and early-career faculty (who applied as participants) were paired with seasoned translators and senior faculty (invited as respondents) to workshop translations-in-progress of various devotional songs and other similarly inspiring verse. During the workshop sessions, participants were asked to situate their chosen Tibetan texts in historical, social, and religious contexts and offer remarks on the challenges of translating them, and respondents offered feedback on the literary dimensions of the translation. This began a dialogue among the attendees in each workshop group about the literary merits of the Tibetan original and the range of possible approaches to its translation. The resulting conversations were generative and exciting. New perspectives were offered; experiments in verse, tone, and meter were encouraged; and a collegial environment of insight emerged. 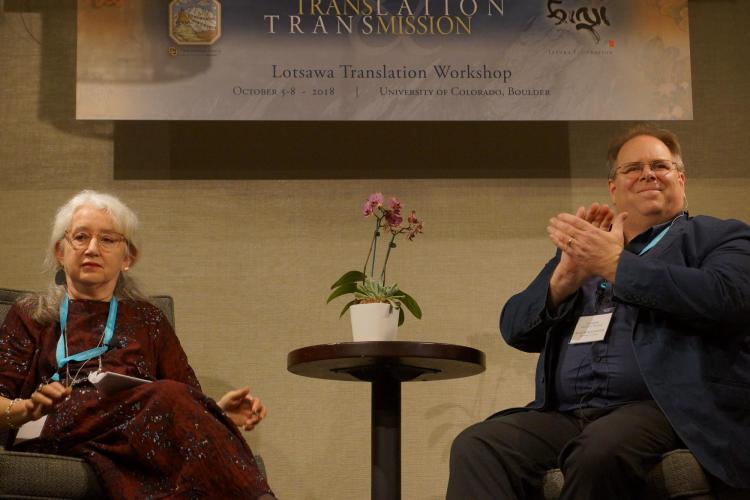 The workshops, panels, and breakout sessions were further illuminated by distinguished scholars who served as keynotes. At the welcome reception at the Hotel Boulderado on Friday evening, Janet Gyatso (Harvard) and Kurtis Schaeffer (University of Virginia) launched the weekend with a humorous and thoughtful dialogue, setting the stage for the rest of the weekend with provocative questions surrounding the project of translation. On Saturday, Lama Jabb (Oxford) delivered a public lecture that was powerful and insightful. Theorizing translation as an act of bardo, or the intermediate state between death and rebirth in Tibetan Buddhism, Lama Jabb offered a distinctly Tibetan hermeneutic for unpacking Tibetan texts, enchanting the audience as he performed various styles of Tibetan song alongside his incisive translations.

Panels on the "Dynamics of Devotion" and "Reflections on the Translation Process" raised probing questions and thoughtful responses to the challenges posed by the translation of Tibetan verse, which then infused the conversations in the breakout sessions and small workshop groups. Daily breakout sessions facilitated by leading scholars and translators on various topics, such as "Linguistic Hospitality," "Vocabularies of Longing," and "Rasa Theory and Affect," also facilitated this type of sustained and thoughtful inquiry. Events in and around the Lotsawa Workshop added further inspiration and edification. As a pre-workshop event, Anne Klein (Rice University) delivered the sixth annual Chögyam Trungpa Lecture in Buddhist Studies at Naropa University on "The Sunlit Sky: Longchenpa's Open Secret" in which she discussed a gnostic turn in Tibetan Buddhism as linked to the vast Tibetan landscape. A Translation/Poetry Slam at Innisfree Poetry Bookstore and Cafe in Boulder, presided over by Julie Regan, encouraged lively performances by a dozen Lotsawa presenters and participants.

By the end of the weekend, the collegial and friendly atmosphere of the Lotsawa Workshop had uplifted everyone’s spirits and encouraged even greater experimentation and fluency in the translation of Tibetan verse. The innovative format of the workshop, the mastery and expertise of the presenters, and the talent and inspiration of the junior translators, all combined to create a fruitful occasion for rethinking our practices and priorities in translating Buddhist texts from Tibetan to capture their literary style and form. Picking up the momentum of the event, Holly Gayley and Dominique Townsend are in conversation with Wisdom Publications to publish an anthology of select translations from the workshop.

The Tibet Himalaya Initiative is honored to have facilitated such a successful and impactful event. It is our aspiration that we can continue these conversations in Lotsawa Translation Workshops to come. Many thanks go to Marcus and Tracy and their wonderful team at the Tsadra Research Center in Boulder for all their support in organizing this workshop and to Joshua Shelton for his exertion and enthusiasm in managing so many of the logistics and communications for the workshop in the months leading up to it.

Photos of the Lotsawa Translation Workshop, courtesy of the Tsadra Foundation: 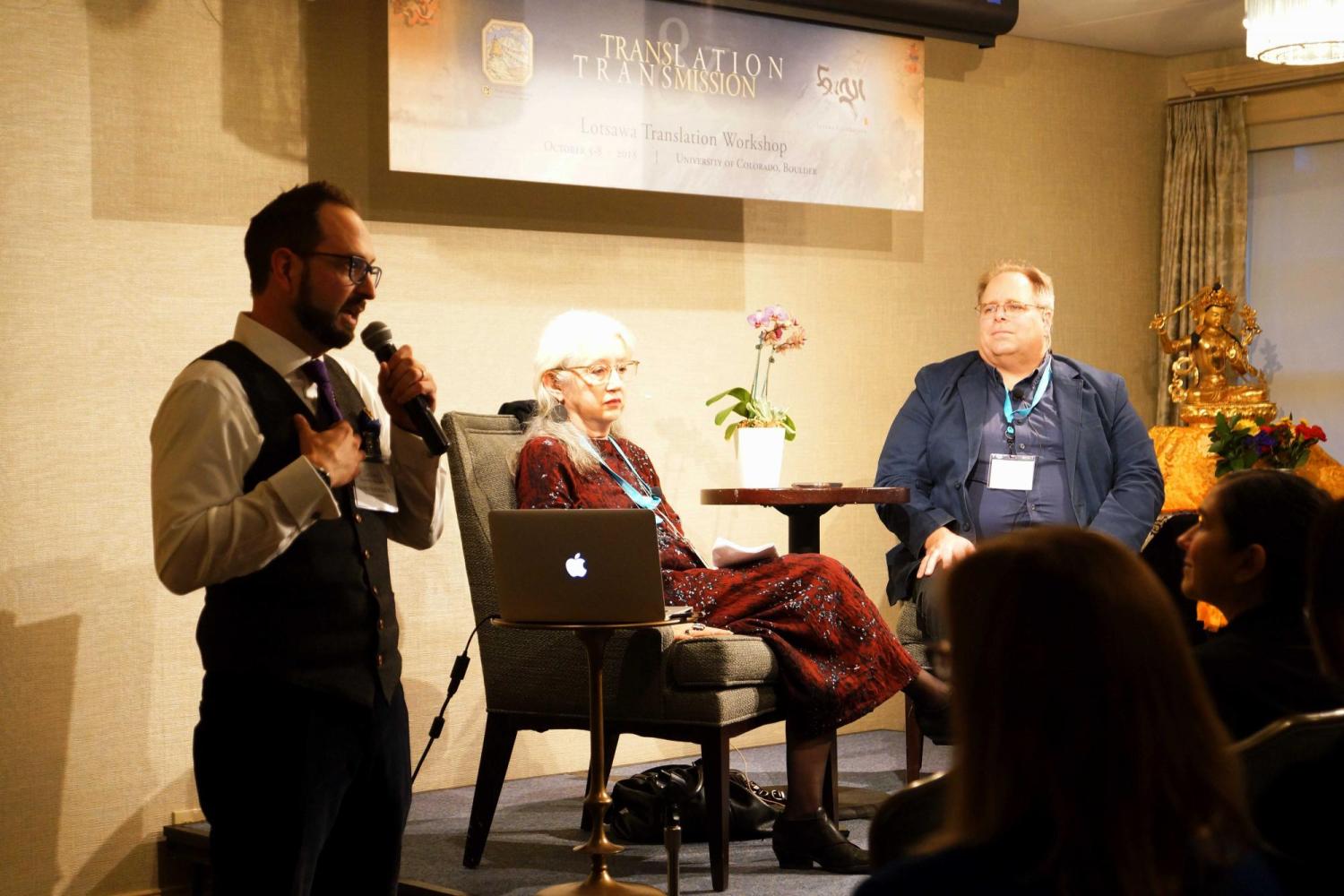 At the Welcome Reception for the Lotsawa Translation Worksop, Marcus Perman, Director of Research for the Tsadra Foundation greets the gathering of 55 presenters and participants. 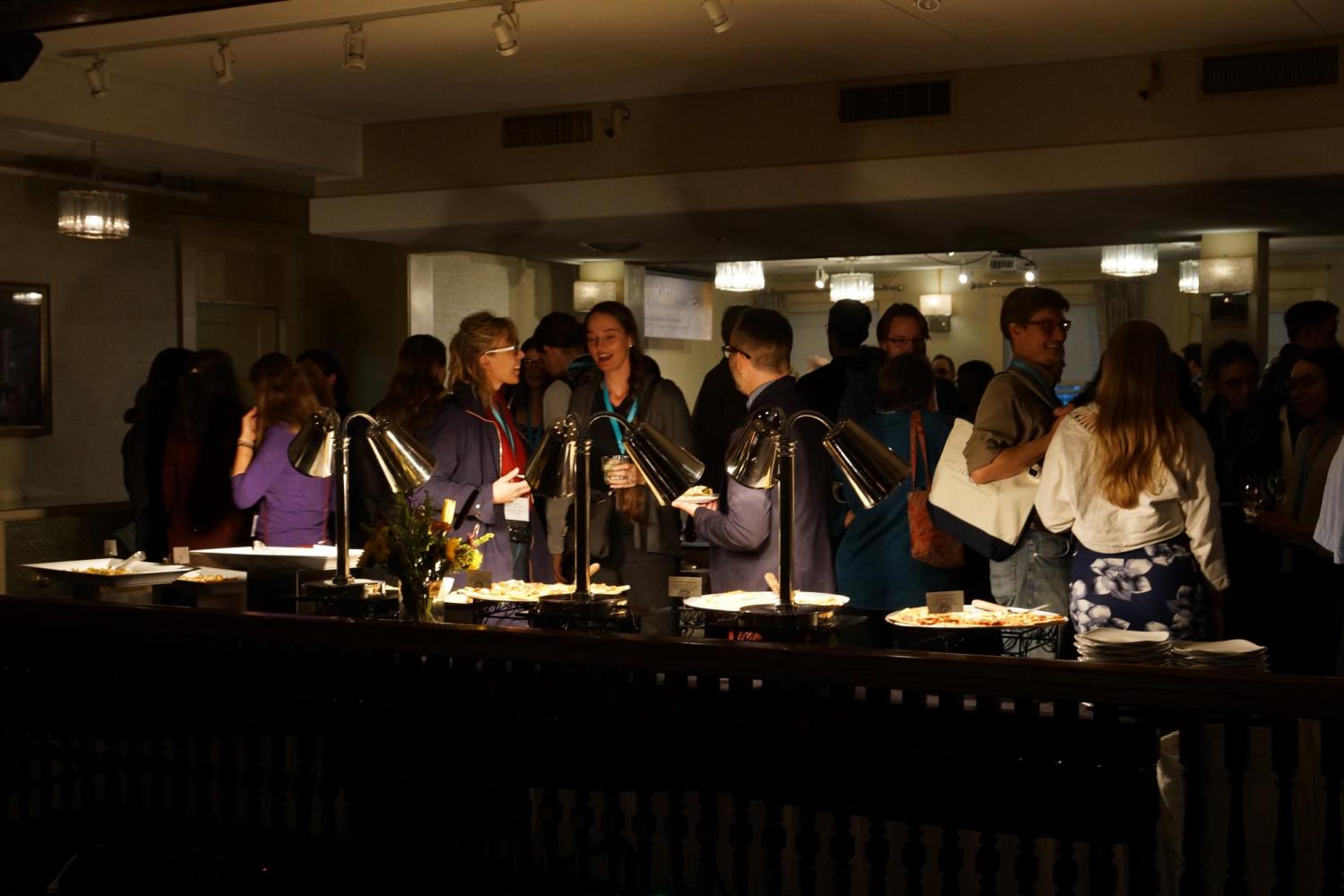 An international group of scholars and translators mingled at the Welcome Reception for the Lotsawa Translation Workshop, held at the Hotel Boulderado on October 5, 2018. 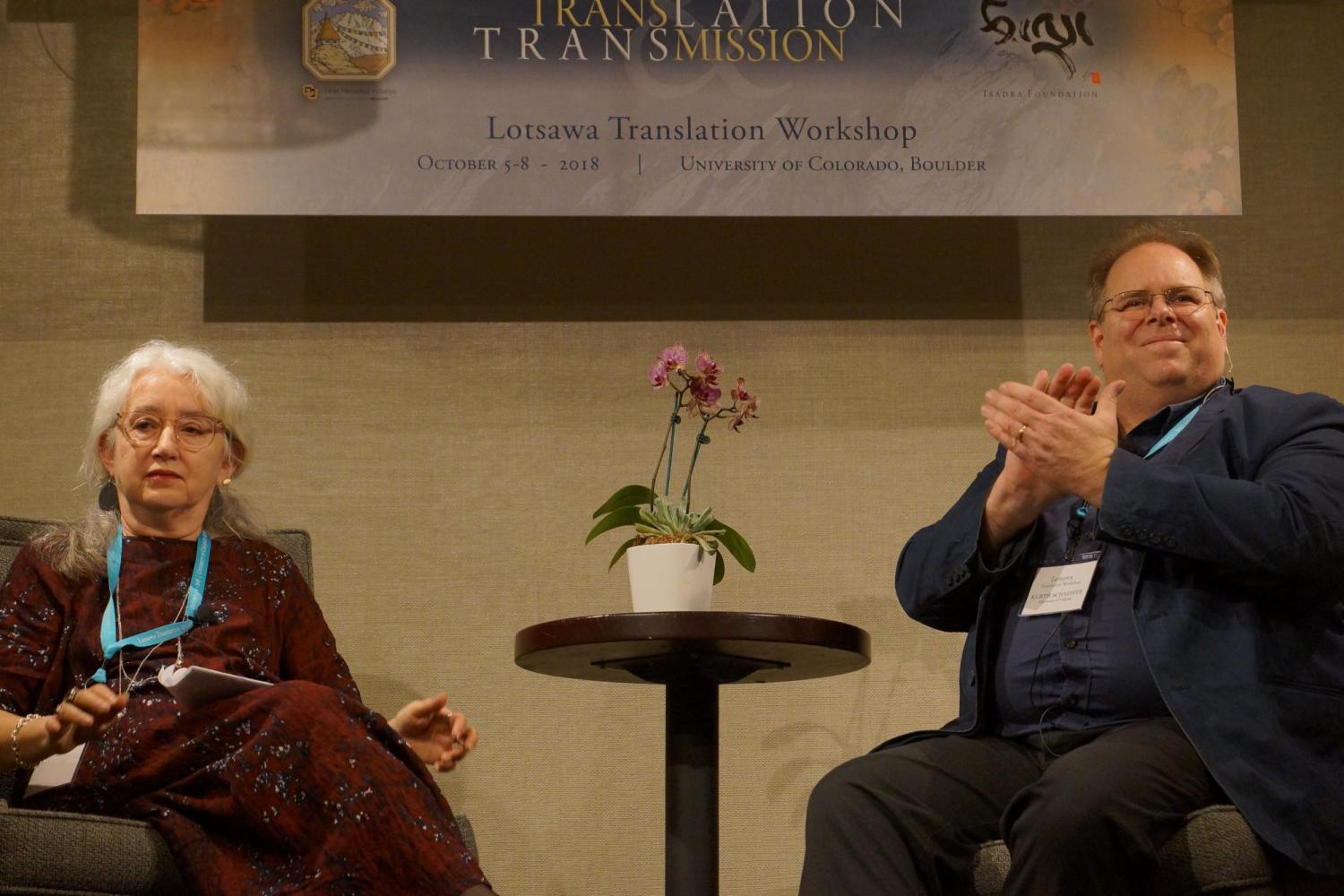 Janet Gyatso and Kurtis Schaeffer engaged in the Opening Dialogue for the Lotsawa Translation Workshop, raising themes and questions on the translation process pursued during the four-day workhop. 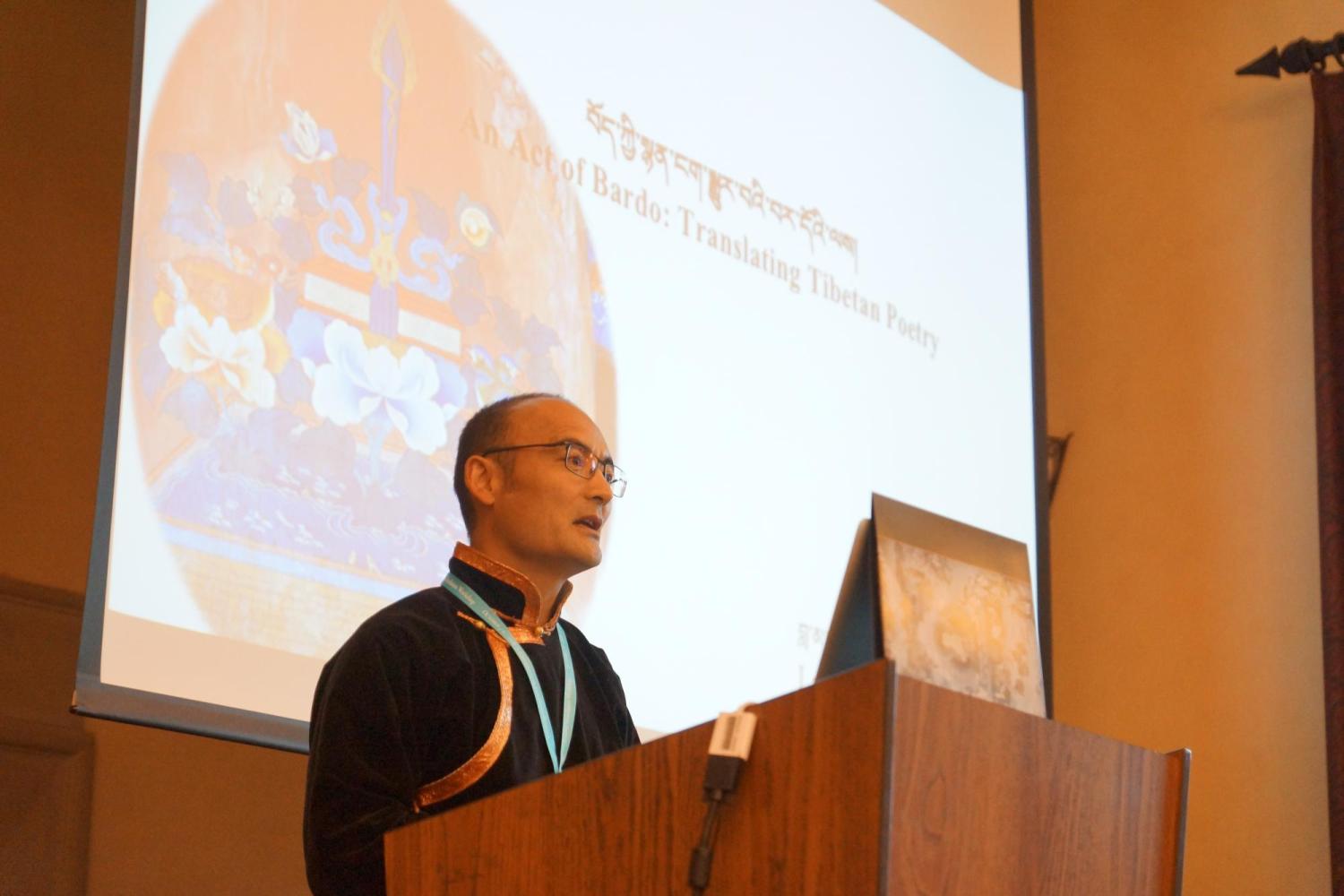 Lama Jabb delivered the Keynote Lecture for the Lotsawa Translation Workshop, "An Act of Bardo: Translating Tibetan Poetry," on Saturday morning in the British Studies Room of Norlin Library. 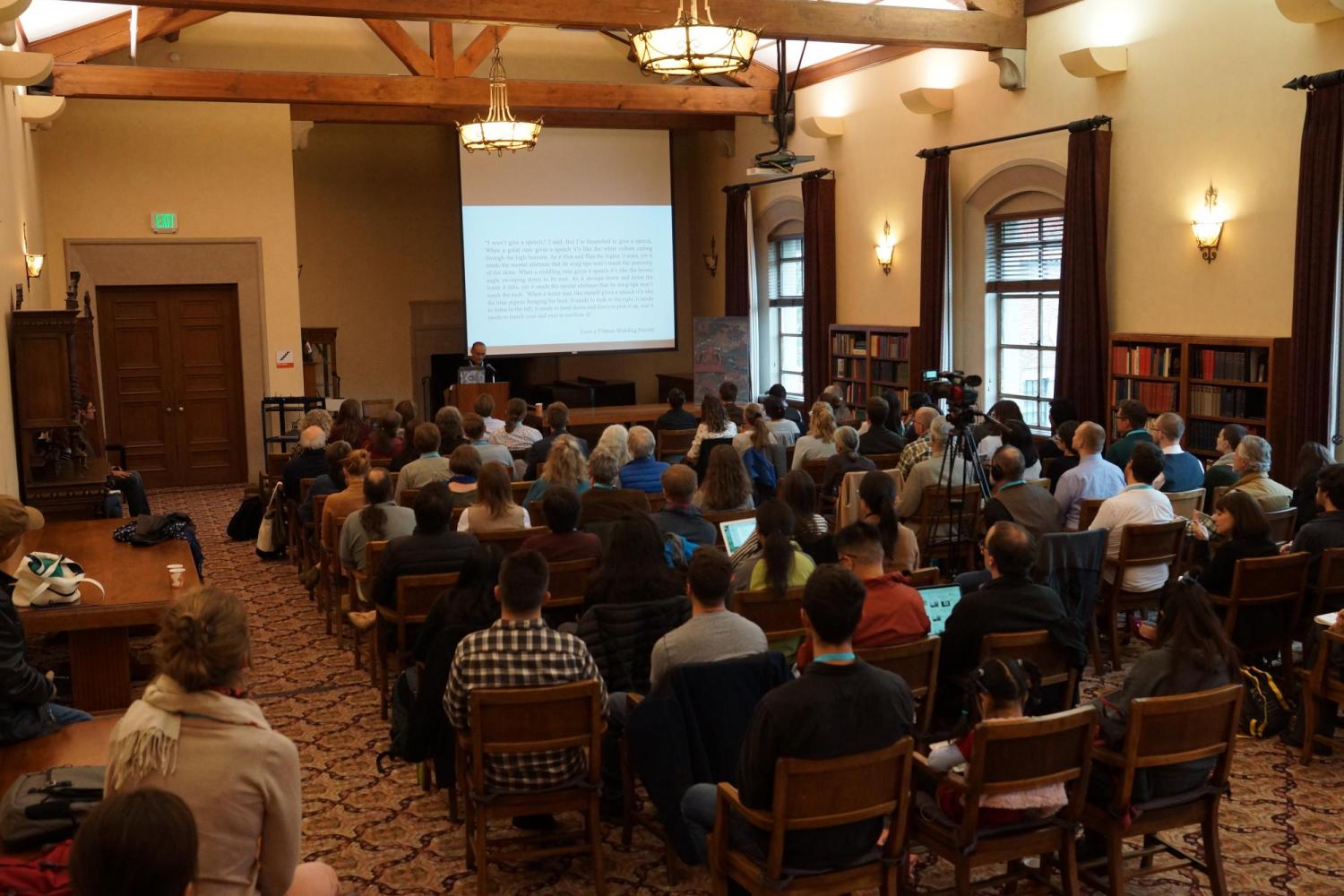 The sizeable audience that gathered for the keynote, open to the public, was enthralled by Lama Jabb's analysis of the translation process and examples from his own translations of Tibetan poetry. 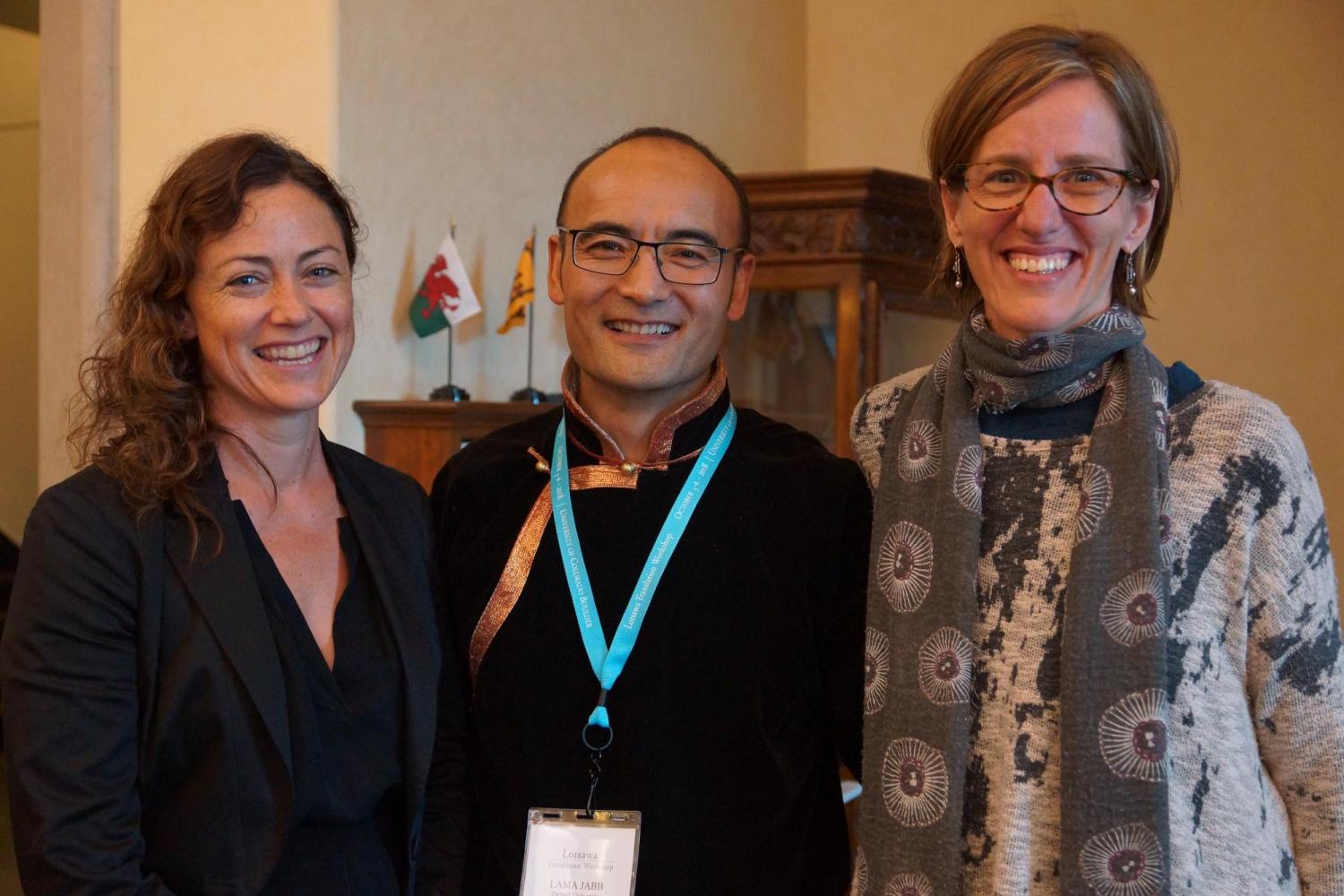 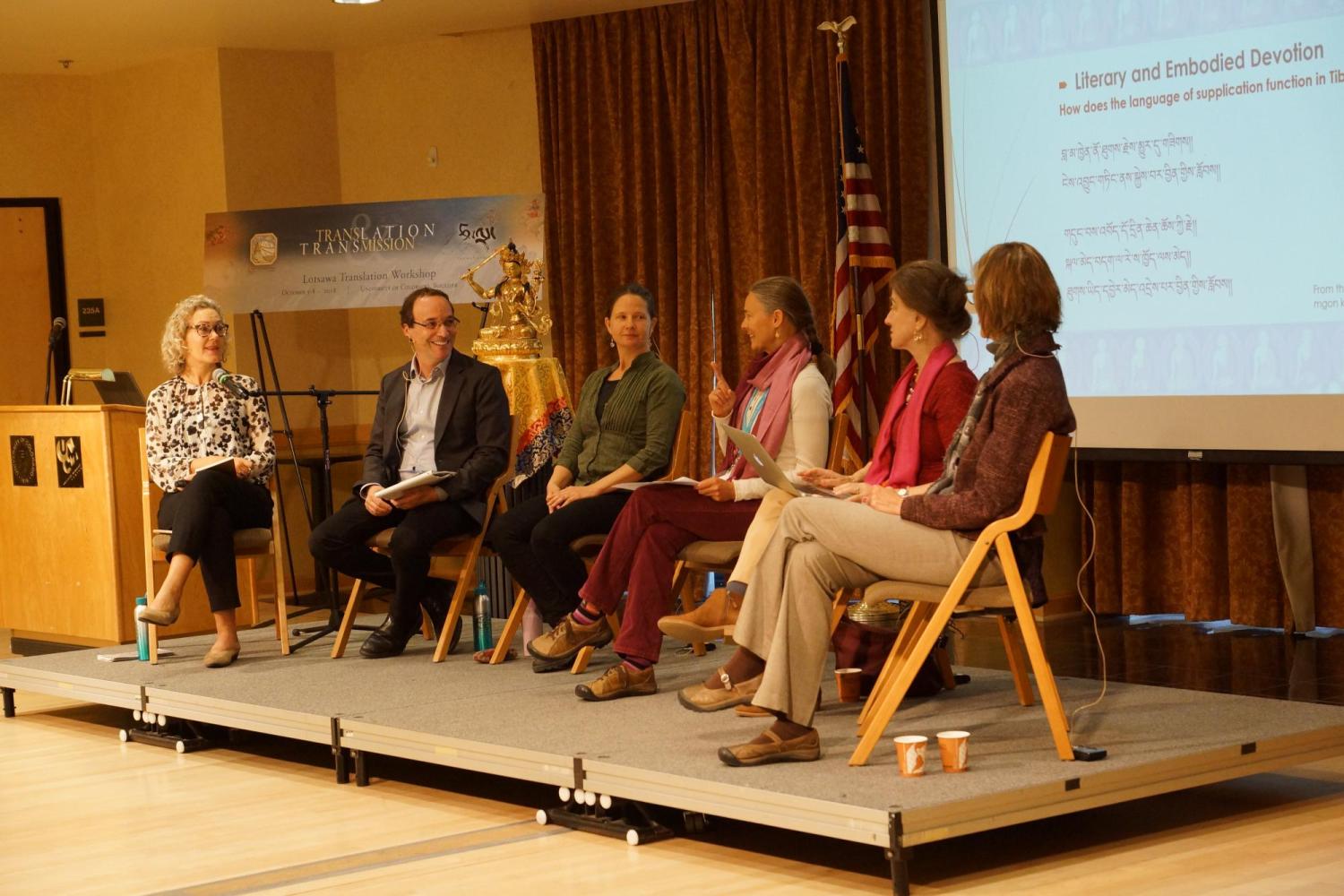 Annabella Pitkin presides over the panel, "Dynamics of Devotion," with Andrew Quintman, Lara Braitstein, Heidi Nevin, Anne Klein, and Holly Gayley in the UMC at University of Colorado Boulder. 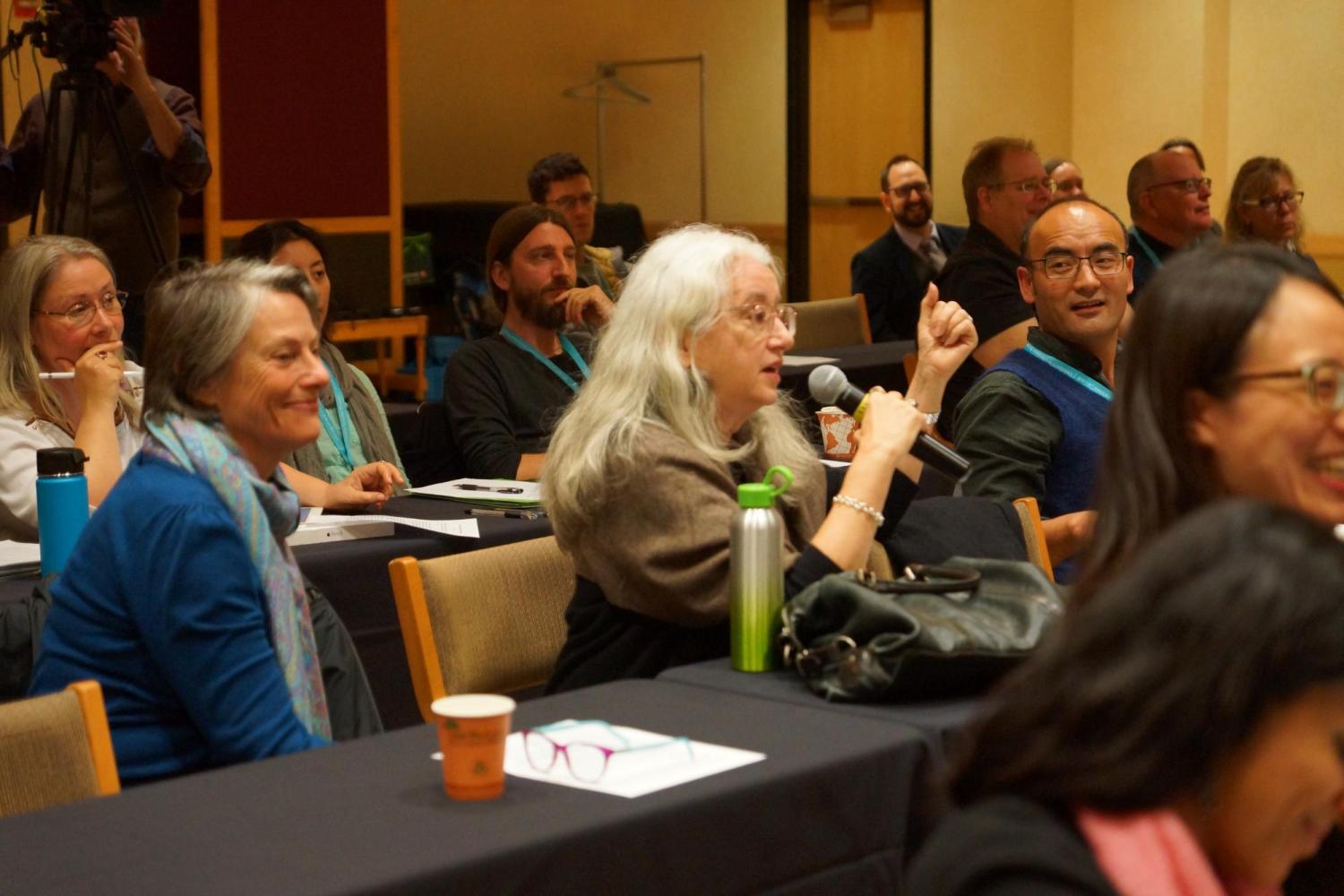 Janet Gyatso posing a question during the "Dynamics of Devotion" panel regarding gender and translation, a possible theme for a future Lotsawa Workshop. 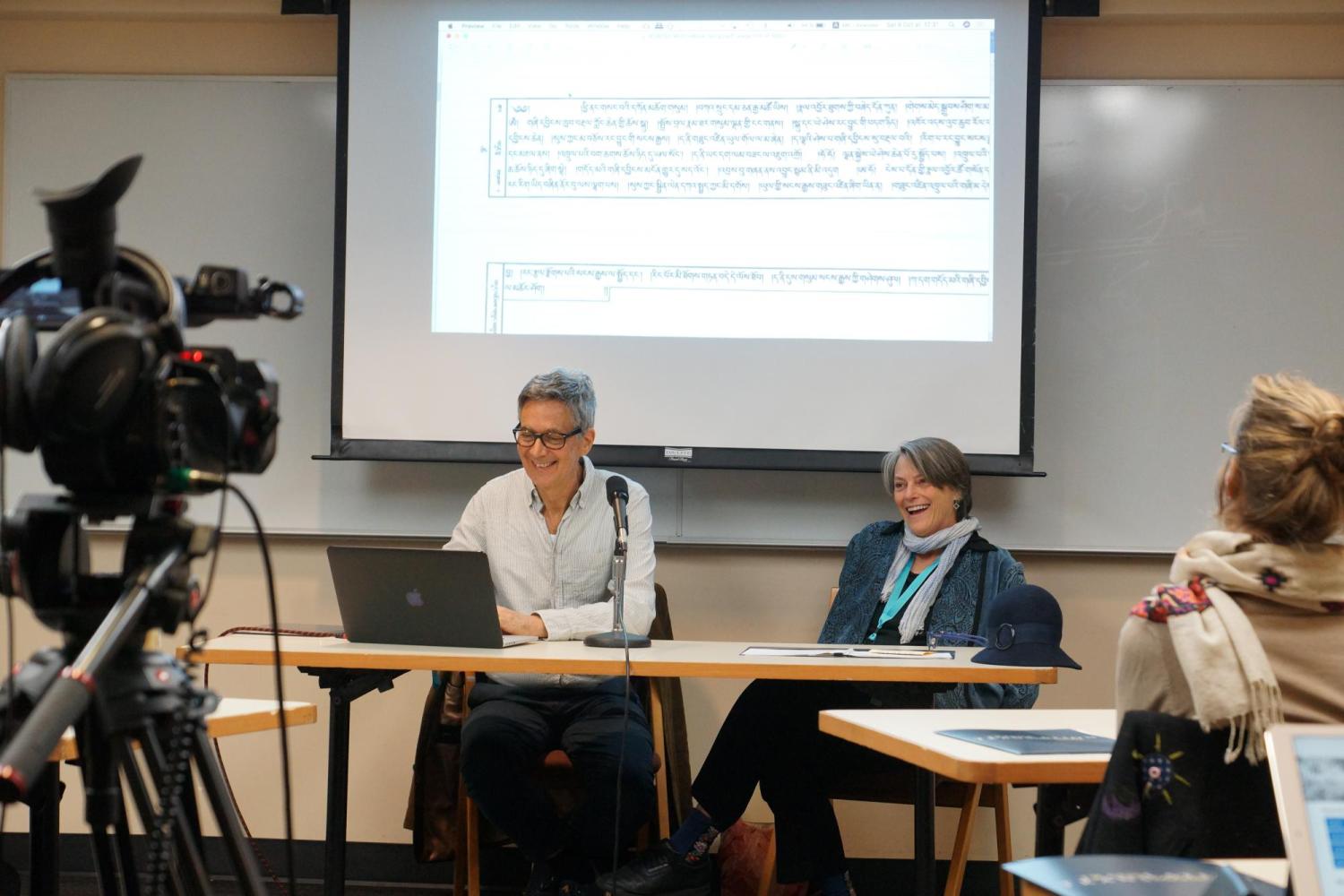 The breakout session with John Canti and Sarah Harding on "Uncontrived Elegance in Tibetan Songs" featured a lively discussion and translation exercise about the relationship between content and form in translating verse. 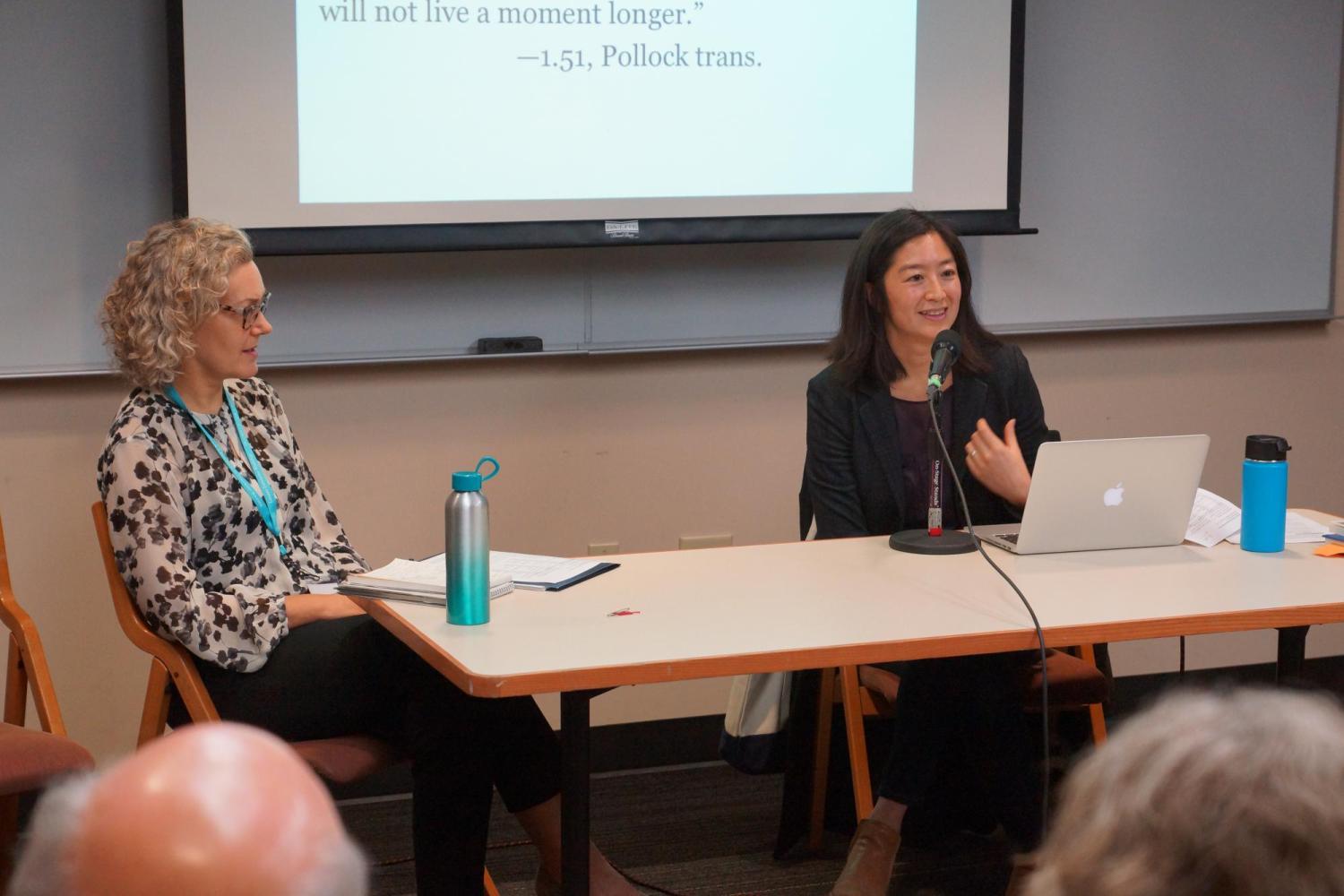 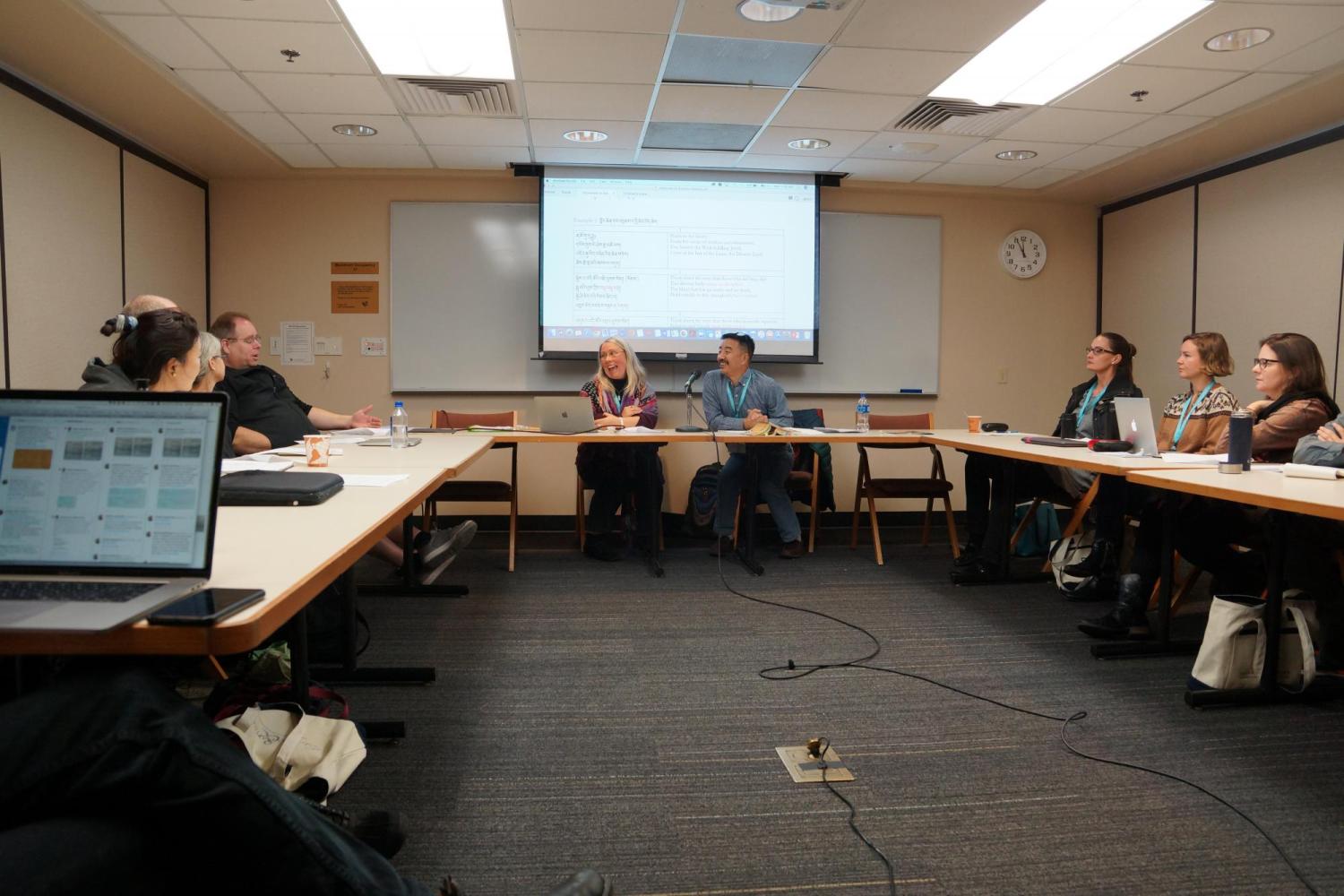 Nicole Willock and Gedun Rabsal share a laugh during the breakout session on "Ornaments Shared by Poetry and Song" that they led together. 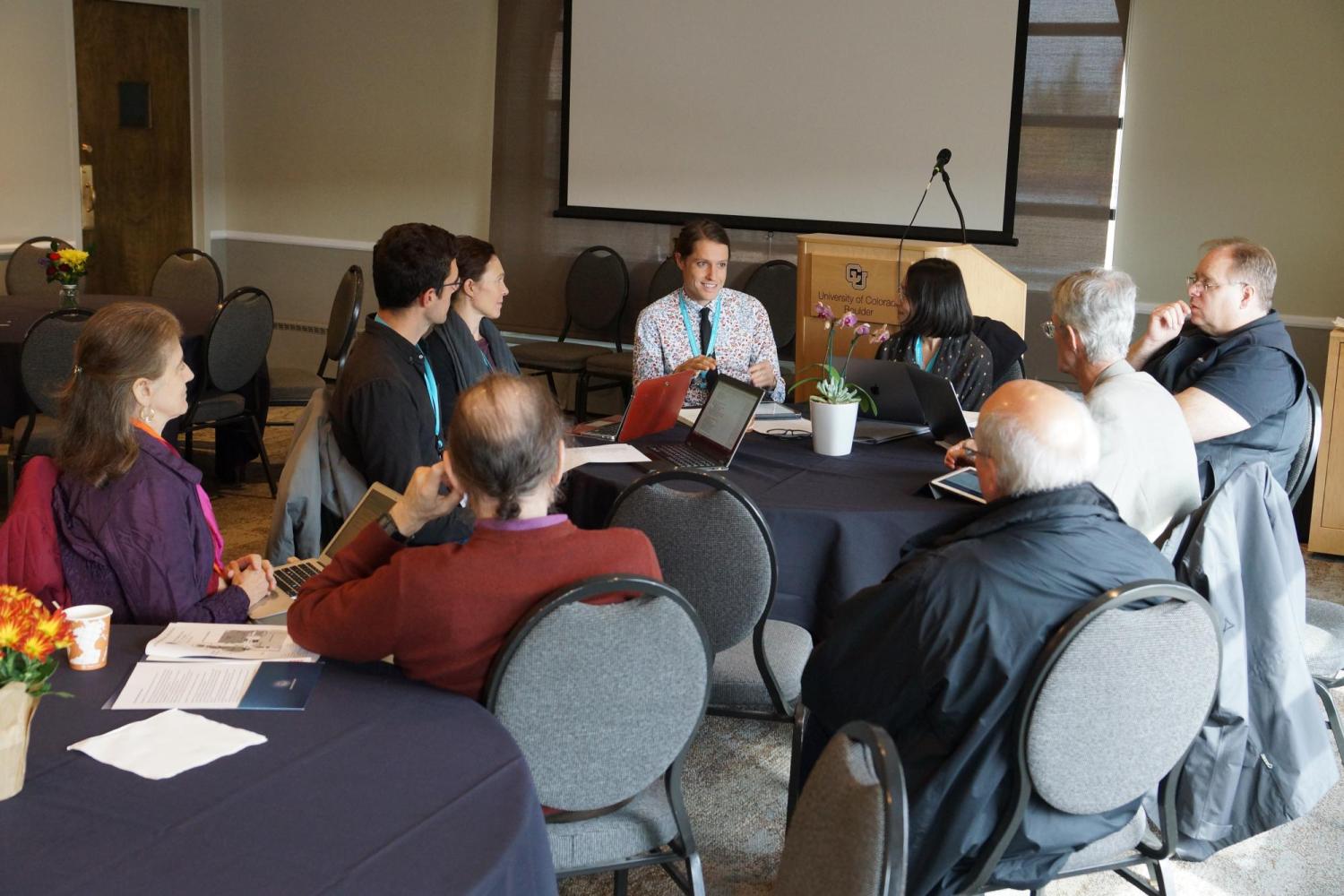 Joshua Shelton presents on his translation-in-progress involving an exchange between the Indian tantric master Padmasambhava and the Tibetan emperor Trisong Detsen in one of the small workshop groups that met each afternoon. 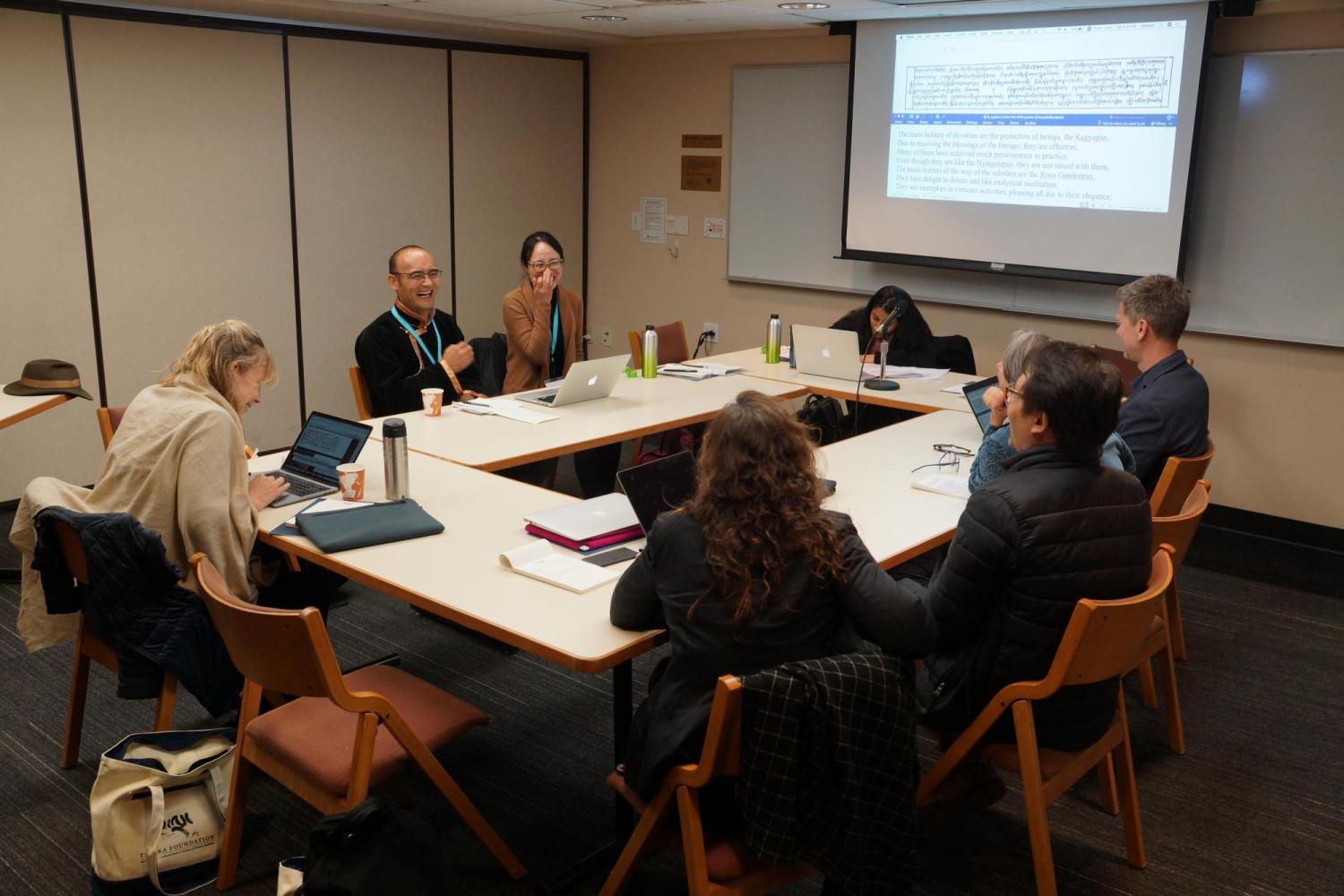 Lama Jabb responds to Rachel Pang's translation of poetic verses from the nineteenth-century tantric adept Shabkar Tsokdruk Rangdrol in one of the workshop groups. 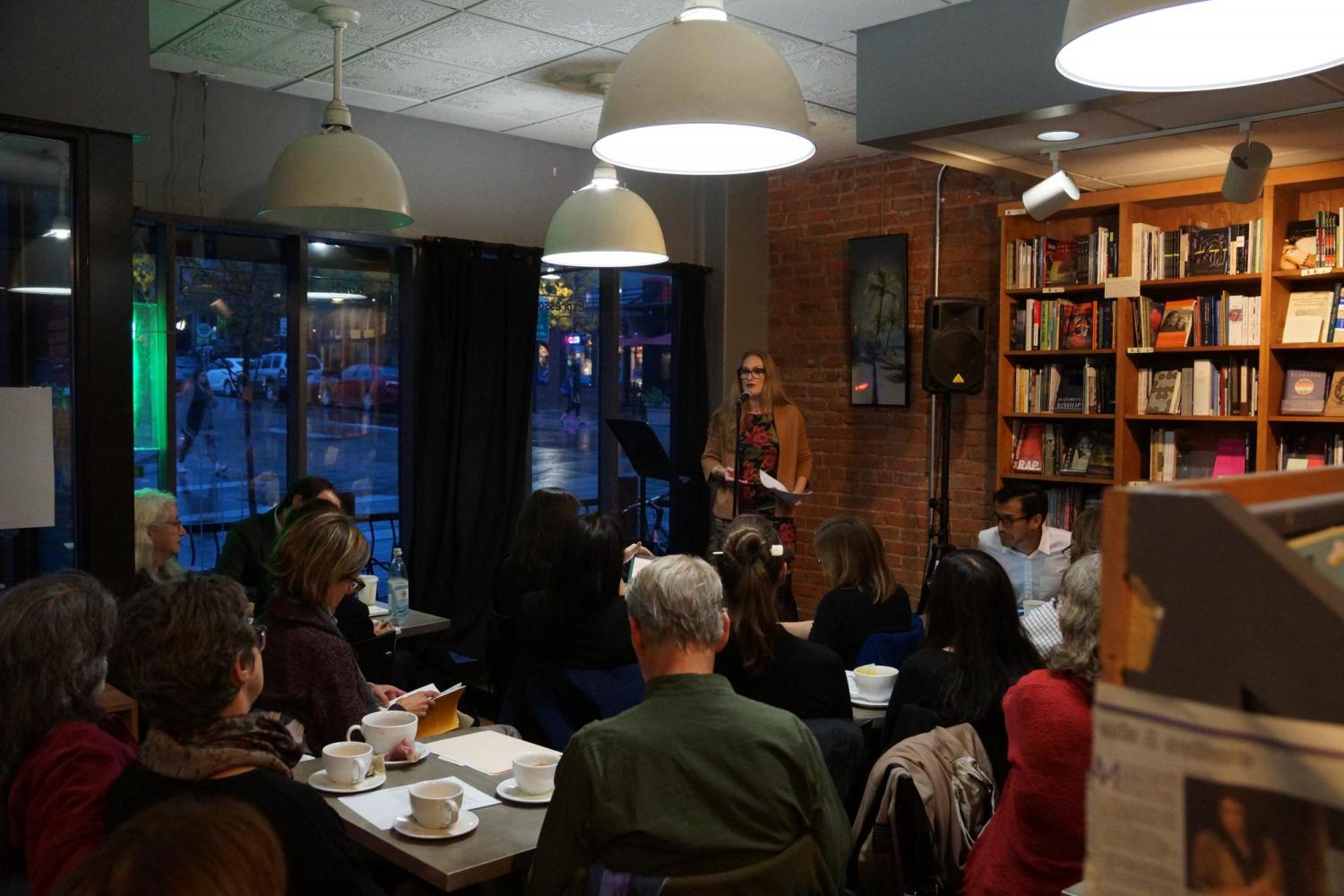 Natasha Mikles performs her Tolkienesque translation from the Gesar epic at the Translation/Poetry Slam at Innisfree Poetry Bookstore and Cafe in Boulder. 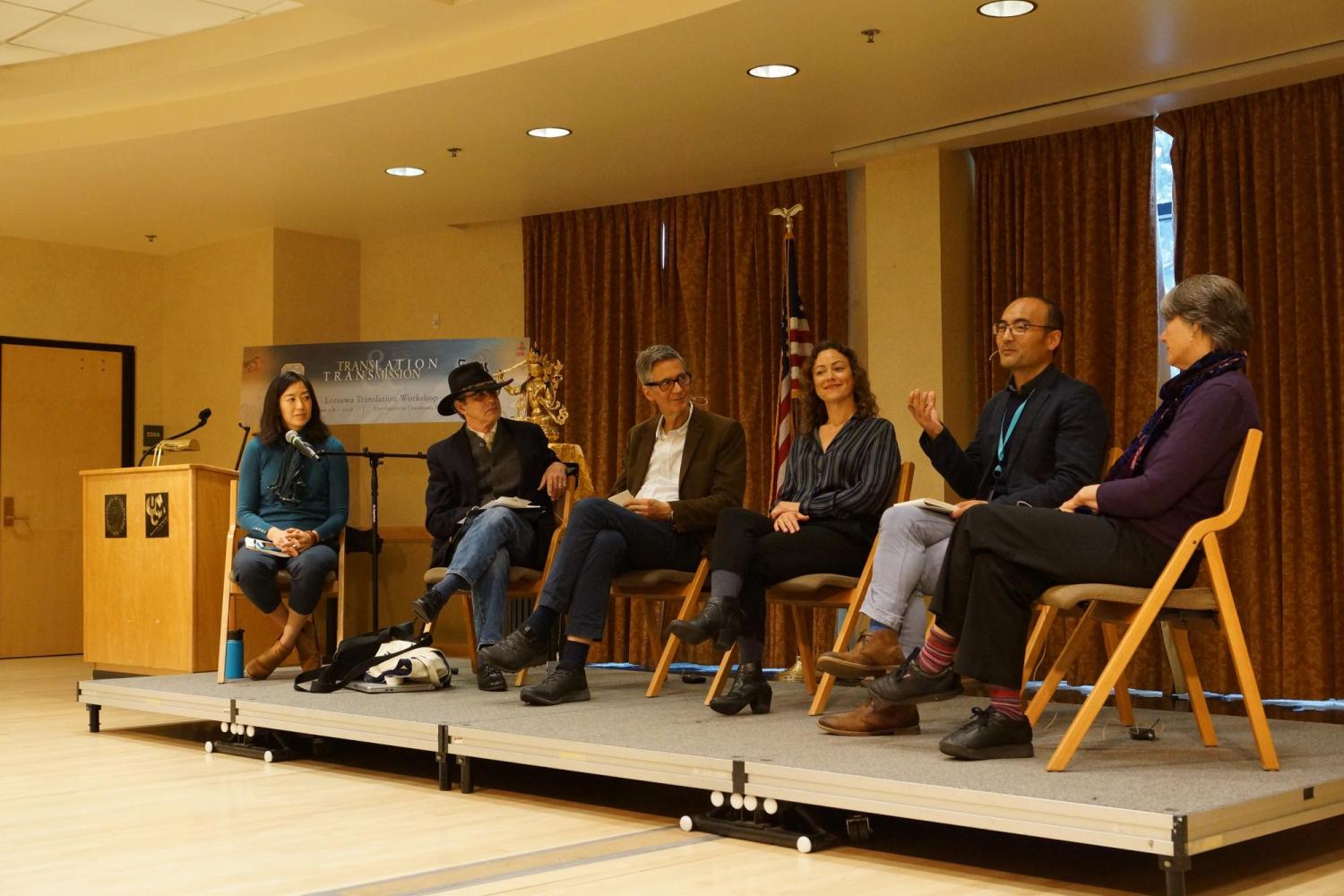 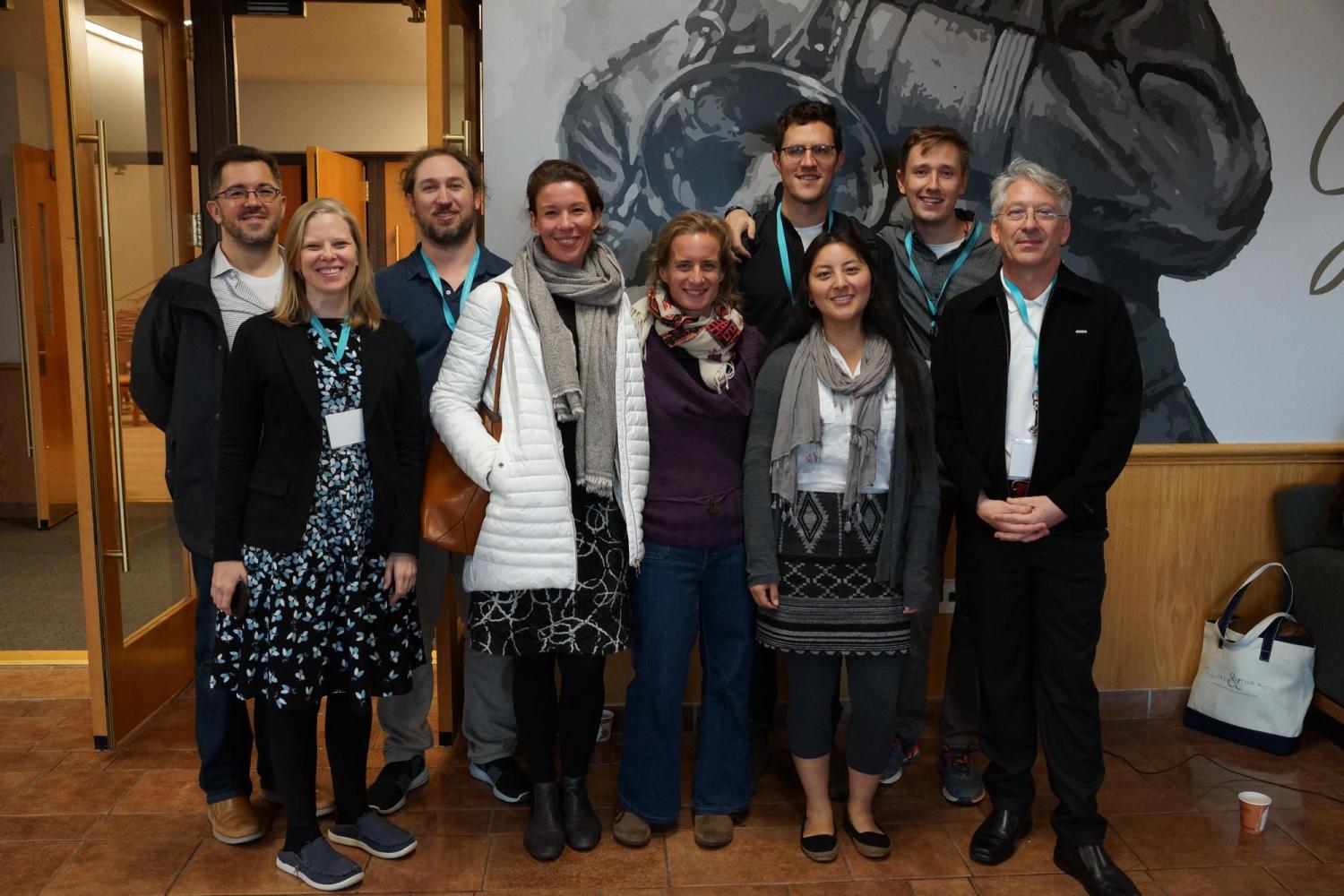 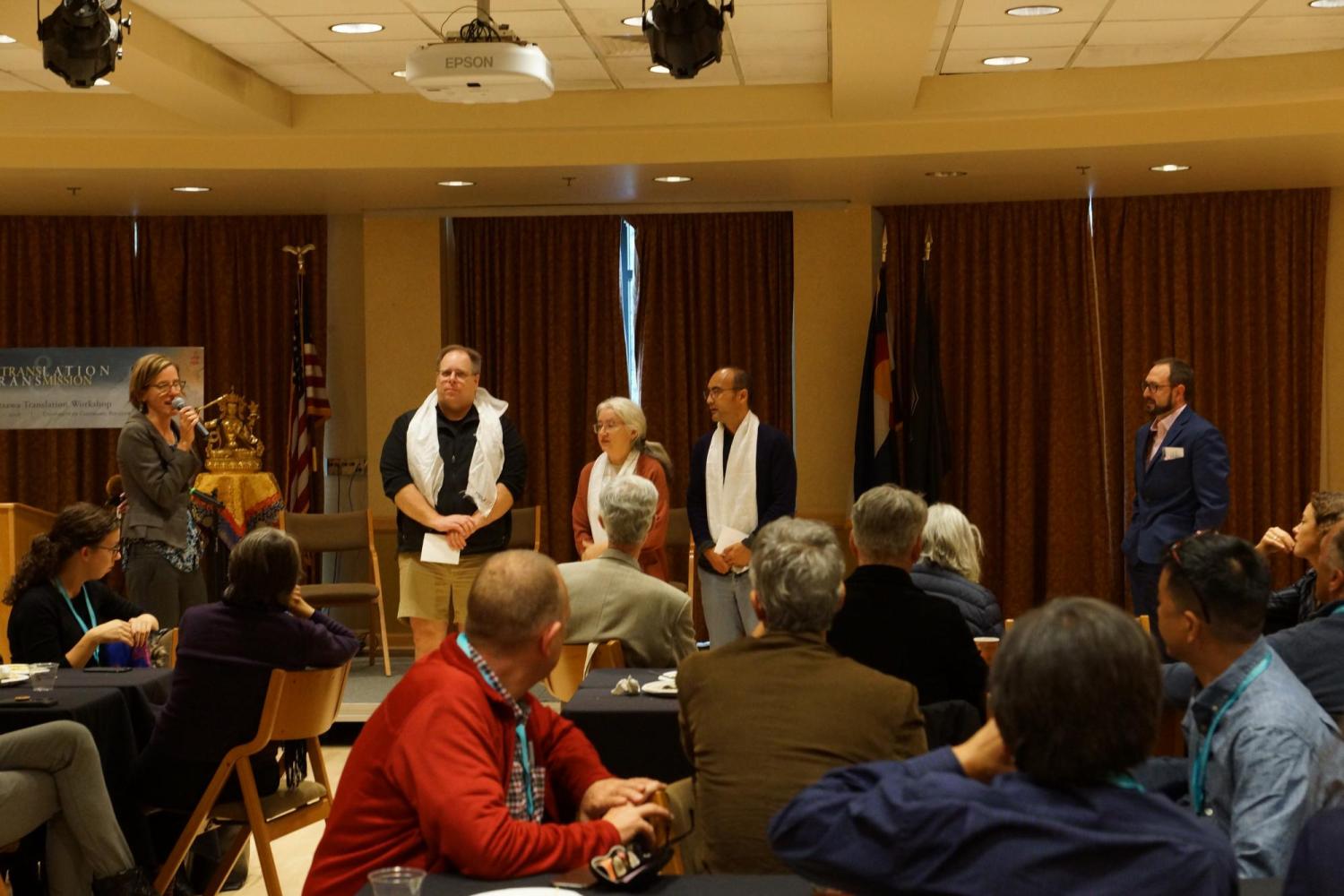 Closing Remarks over lunch with keynotes honored. Board members of the Tsadra Foundation attended and were given a big round of applause for their generous support of the Lotsawa Workshop.