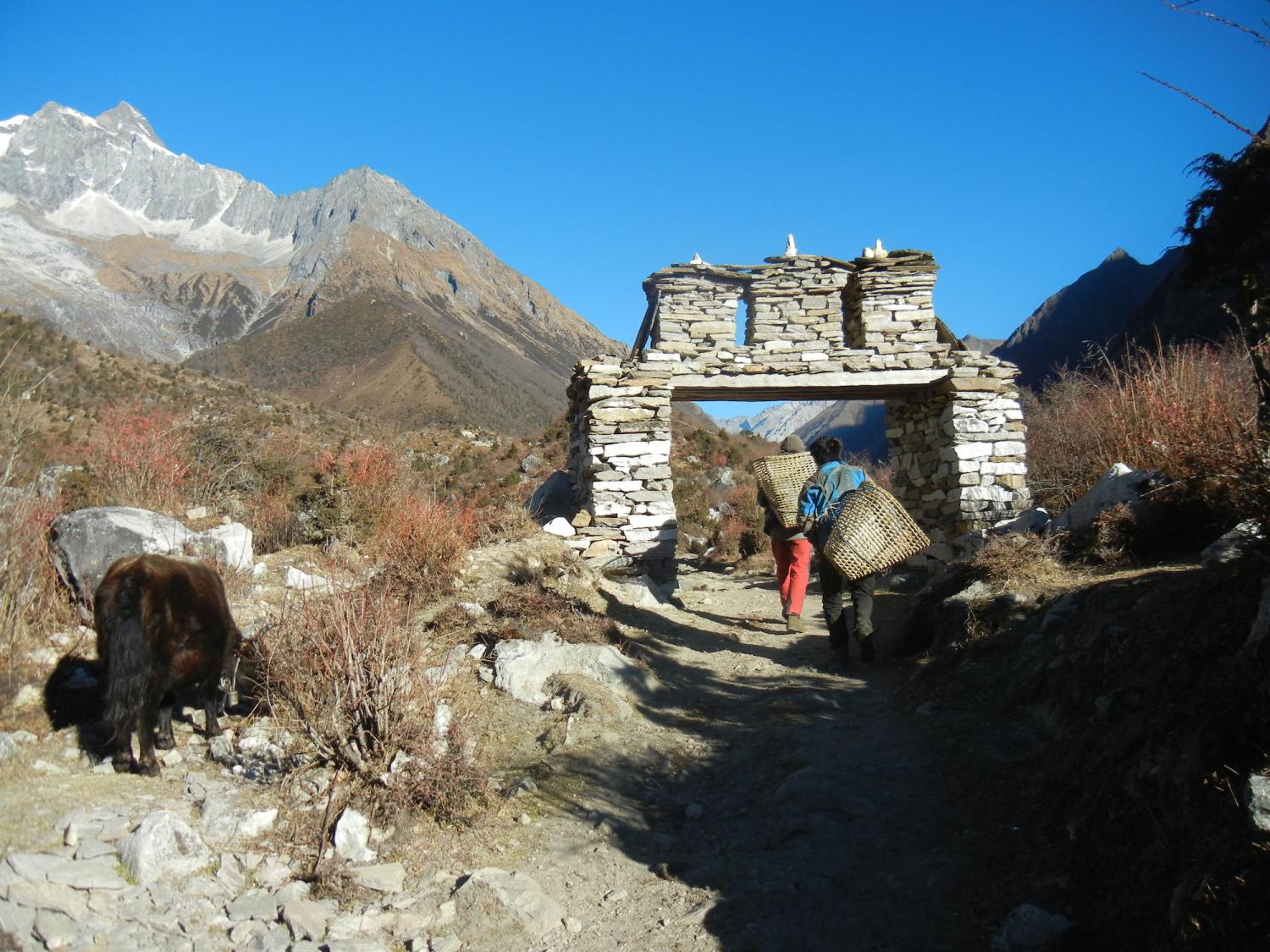 The upper gate of Sama village

Firewood gatherers leaving, while a yak grazes on the tundra. 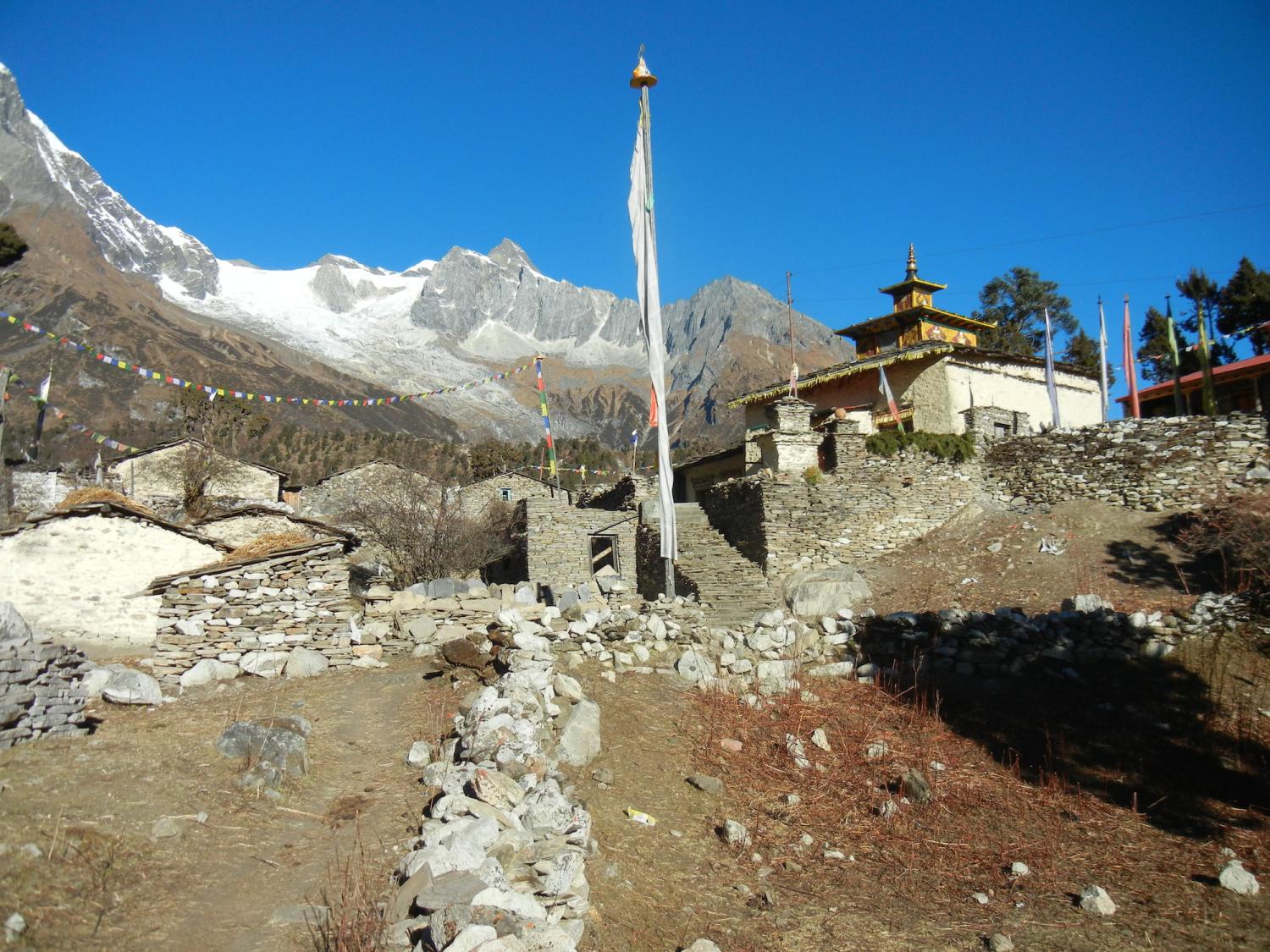 The Sama village gompa with Manaslu glacier in the background. 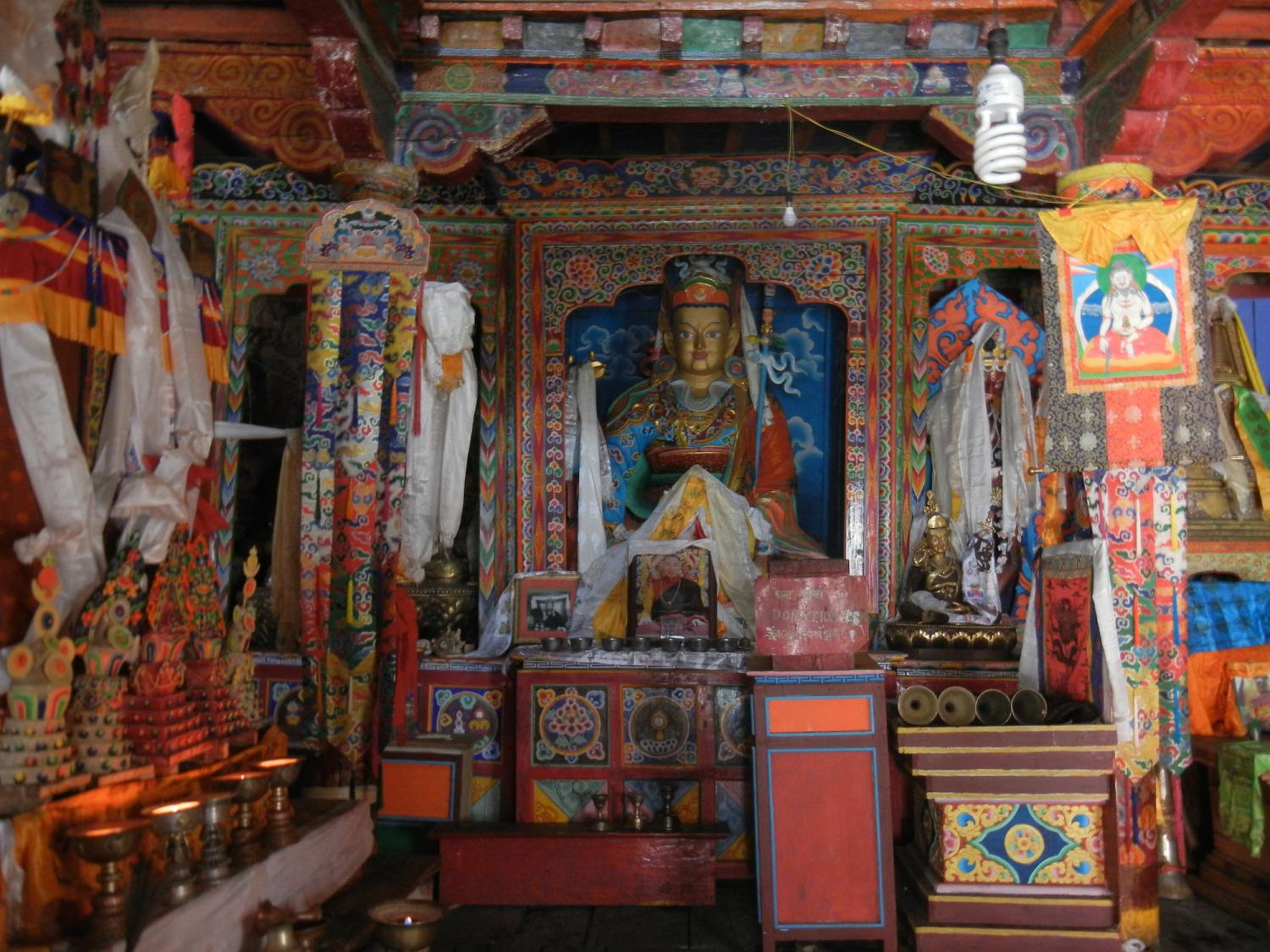 The interior of the Sama gompa

Notice in the upper right, the image of Thangthong Gyalpo, the traditional founder of lhamo or Tibetan opera. 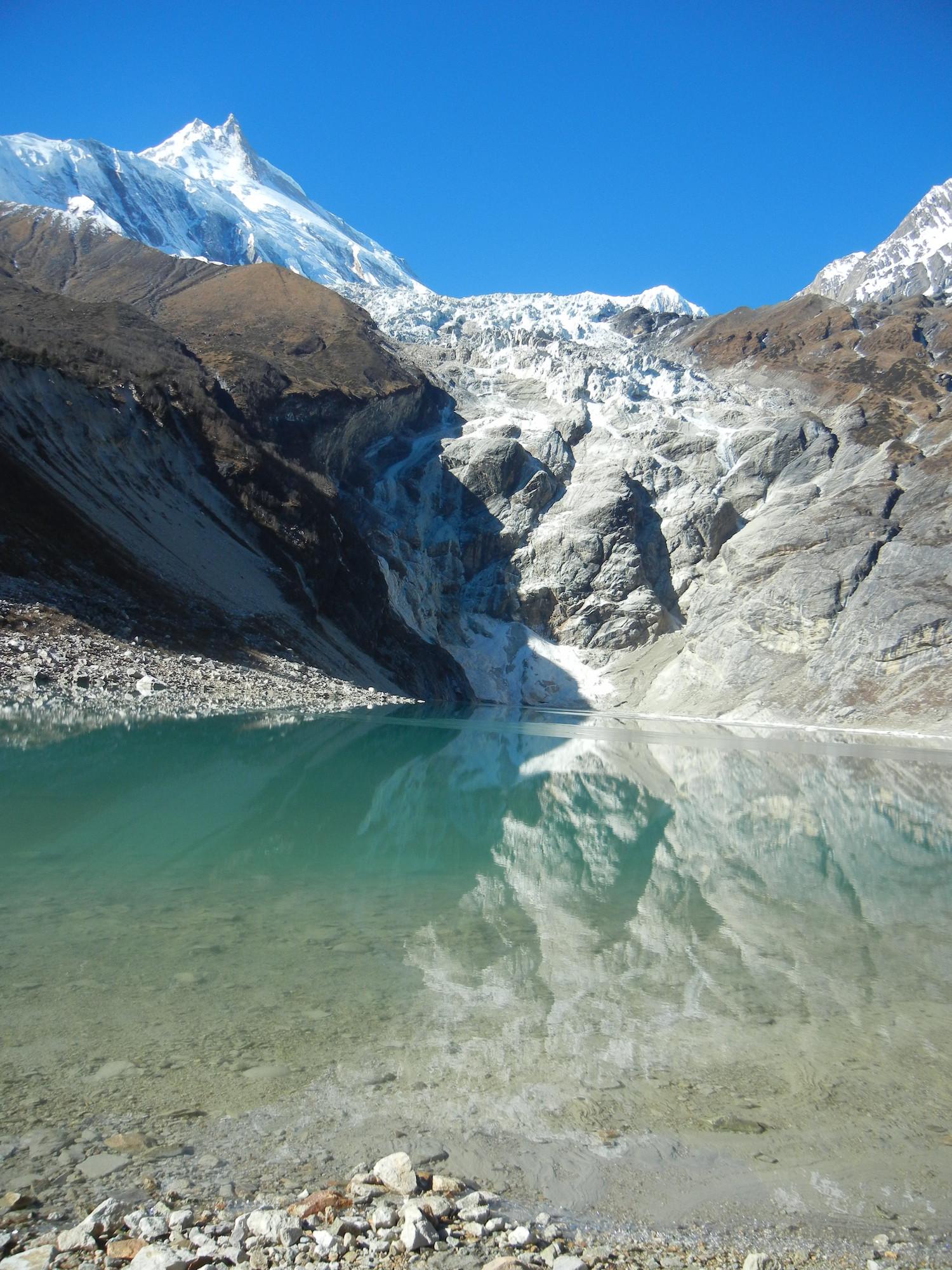 Just below Manaslu peak and glacier. 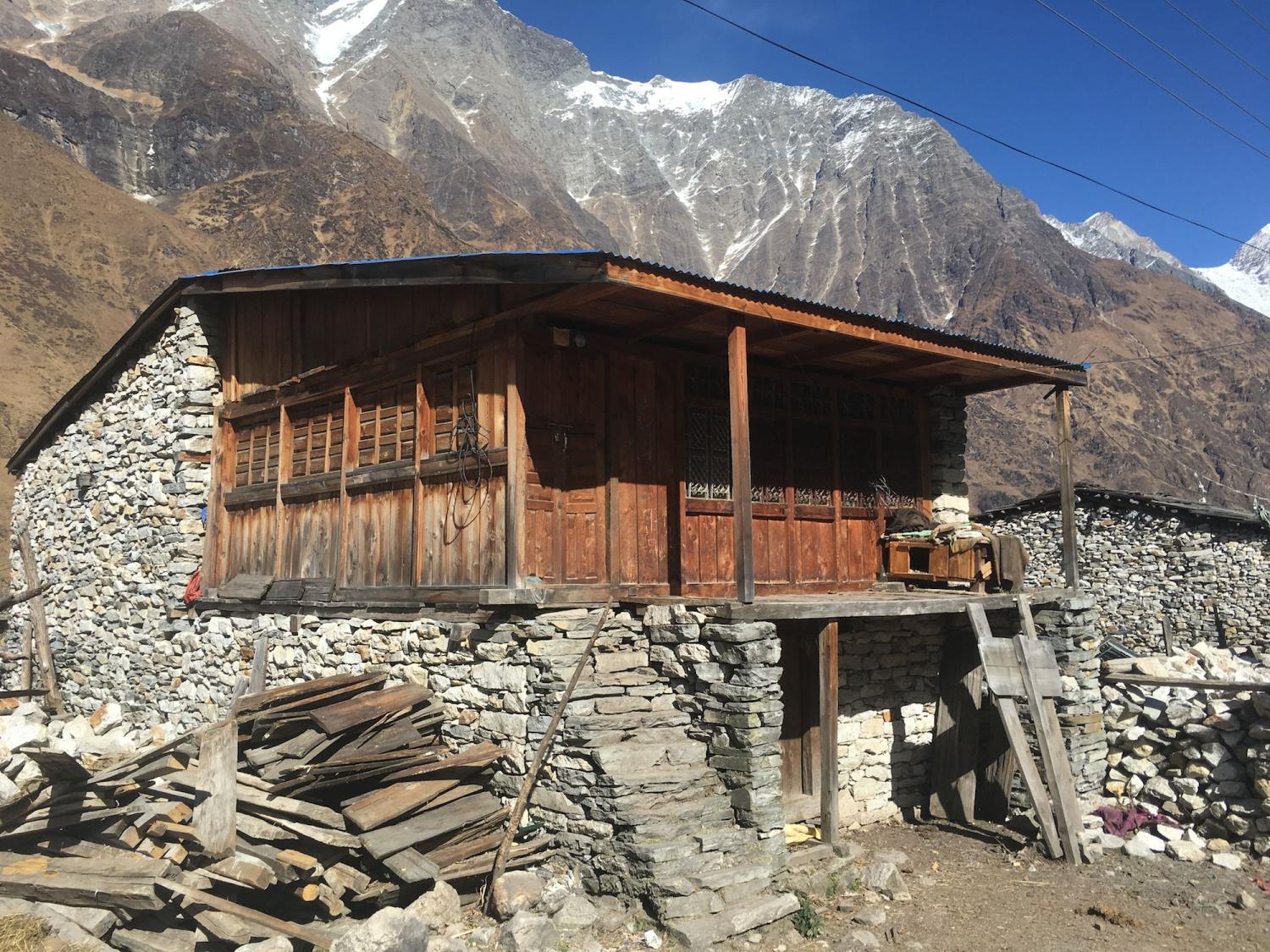 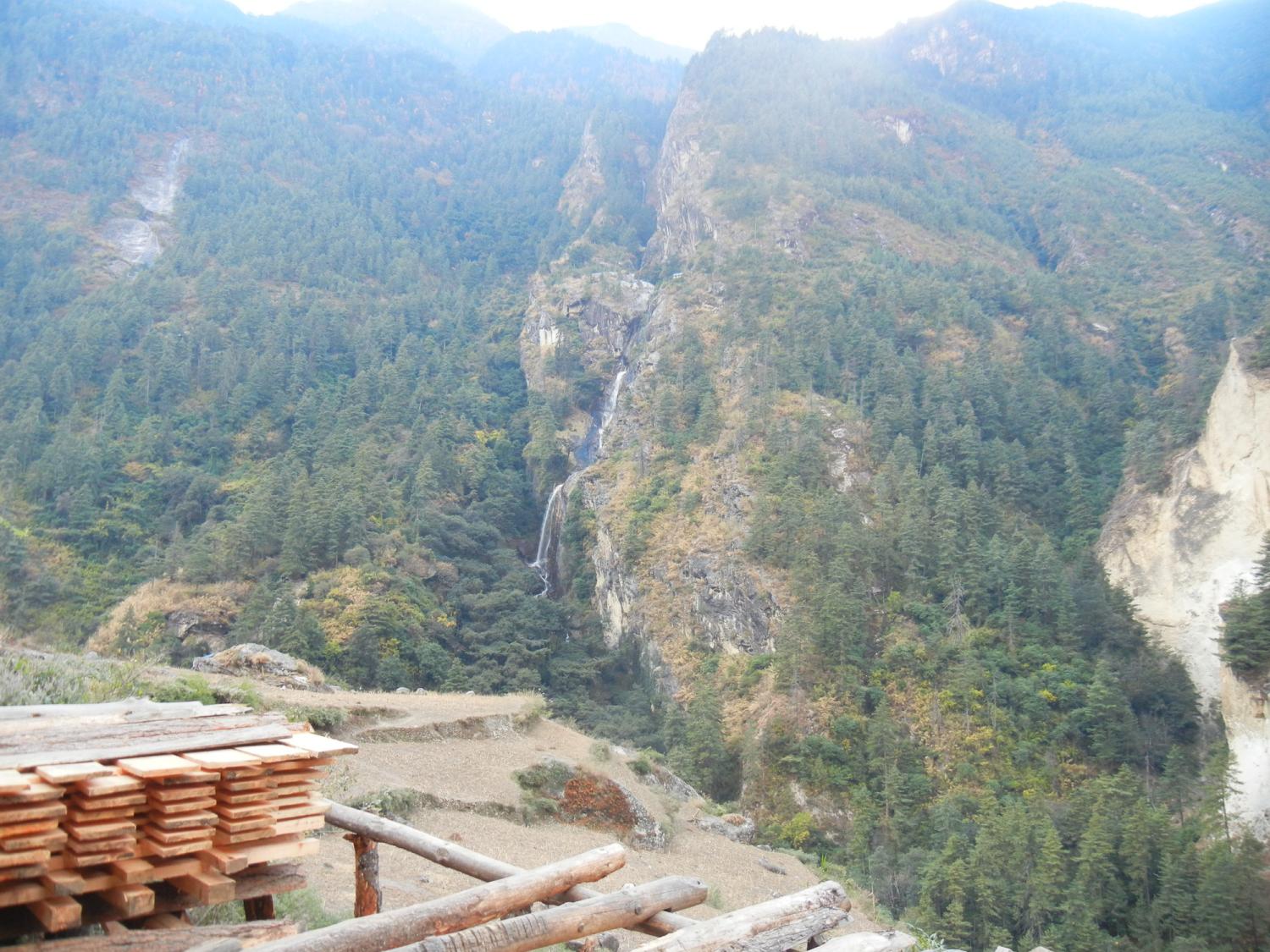 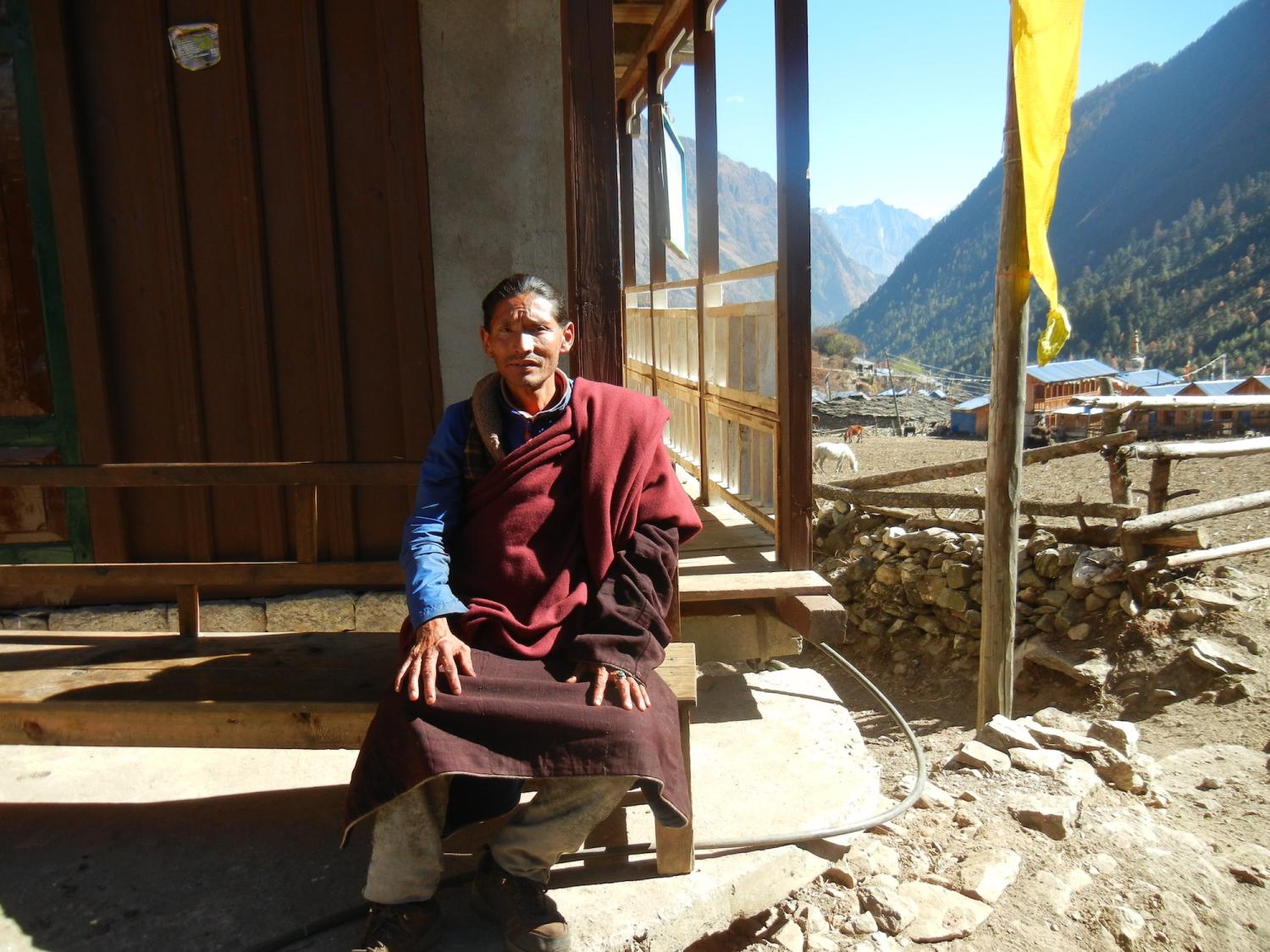 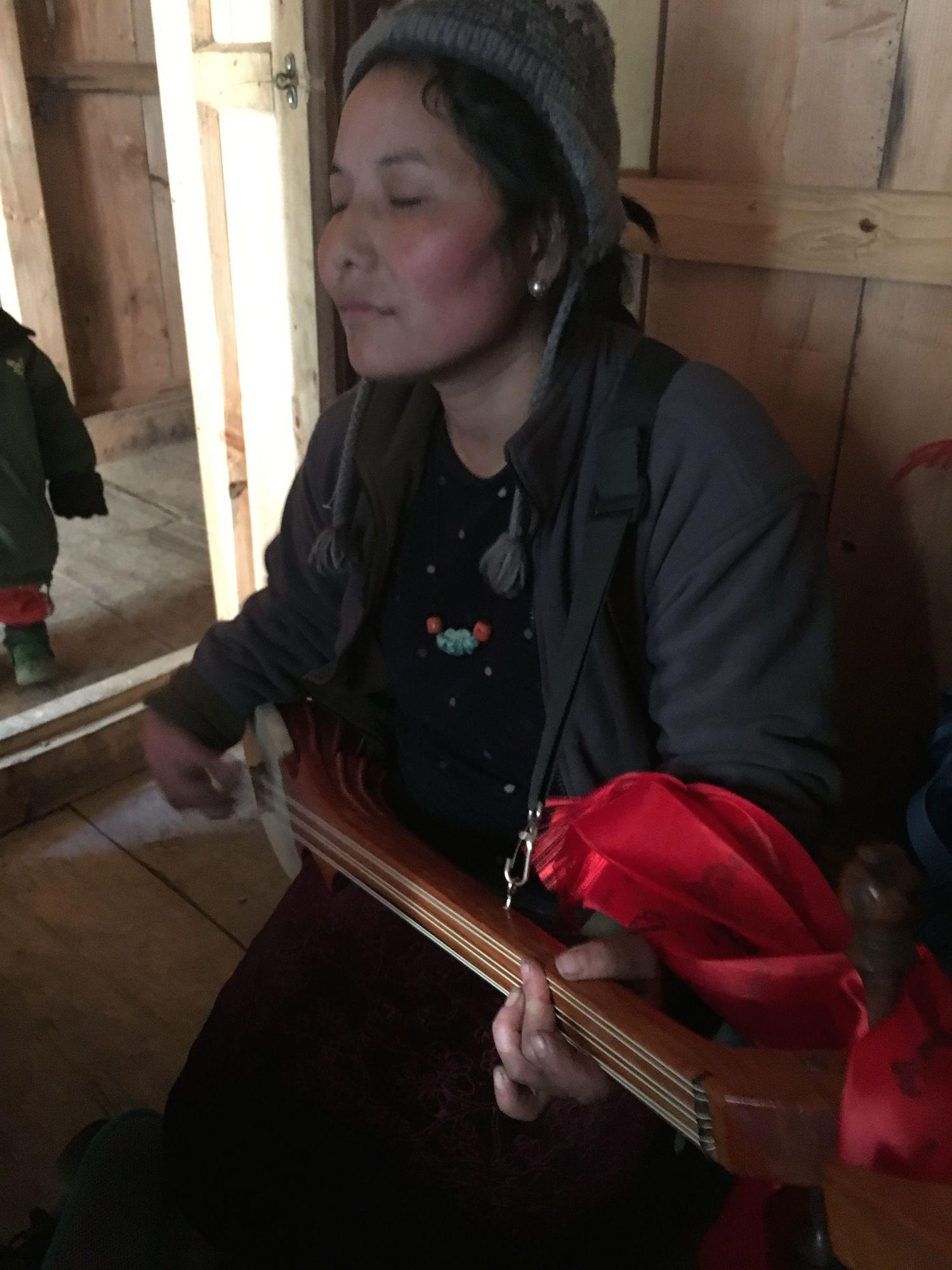 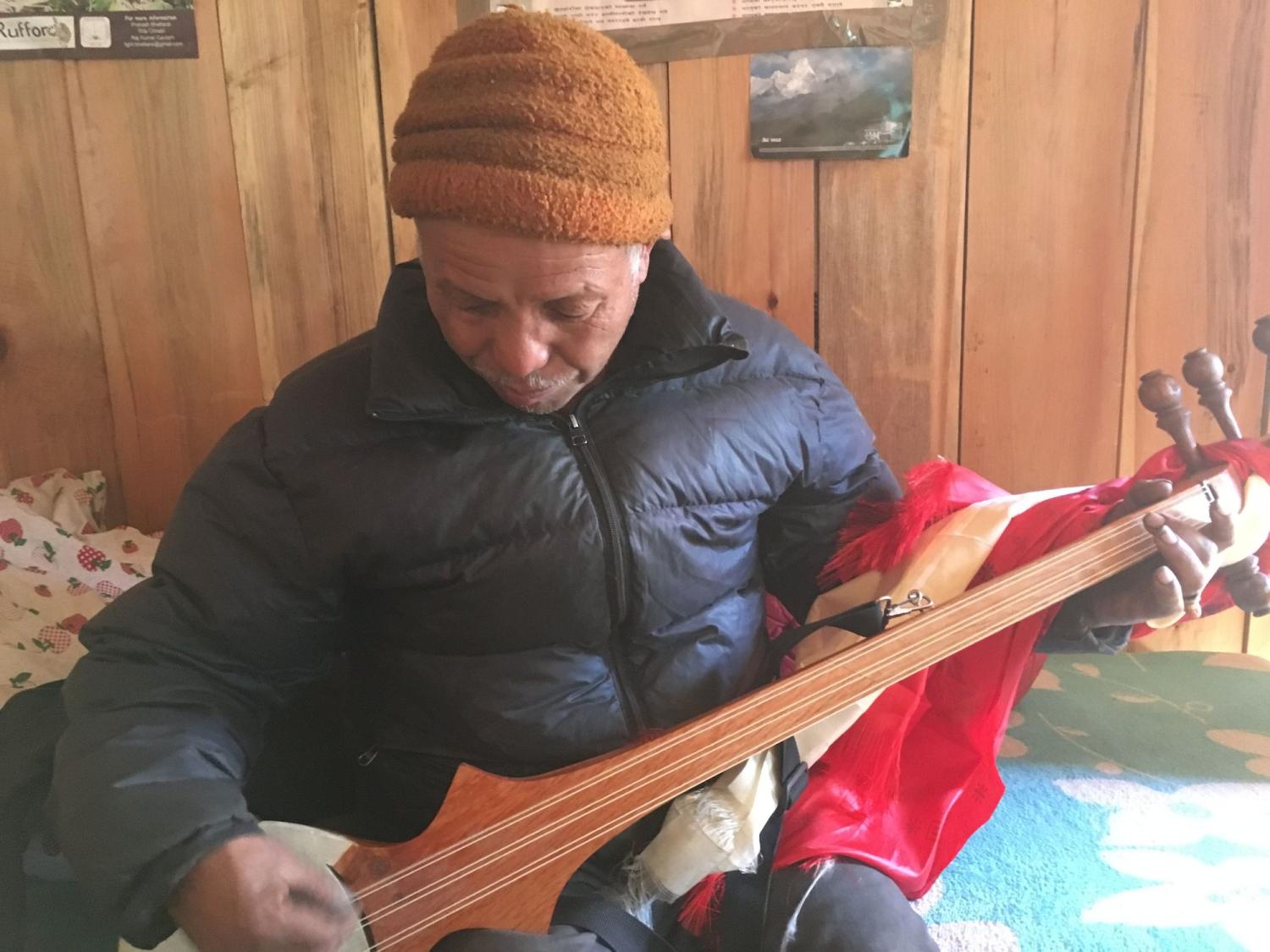 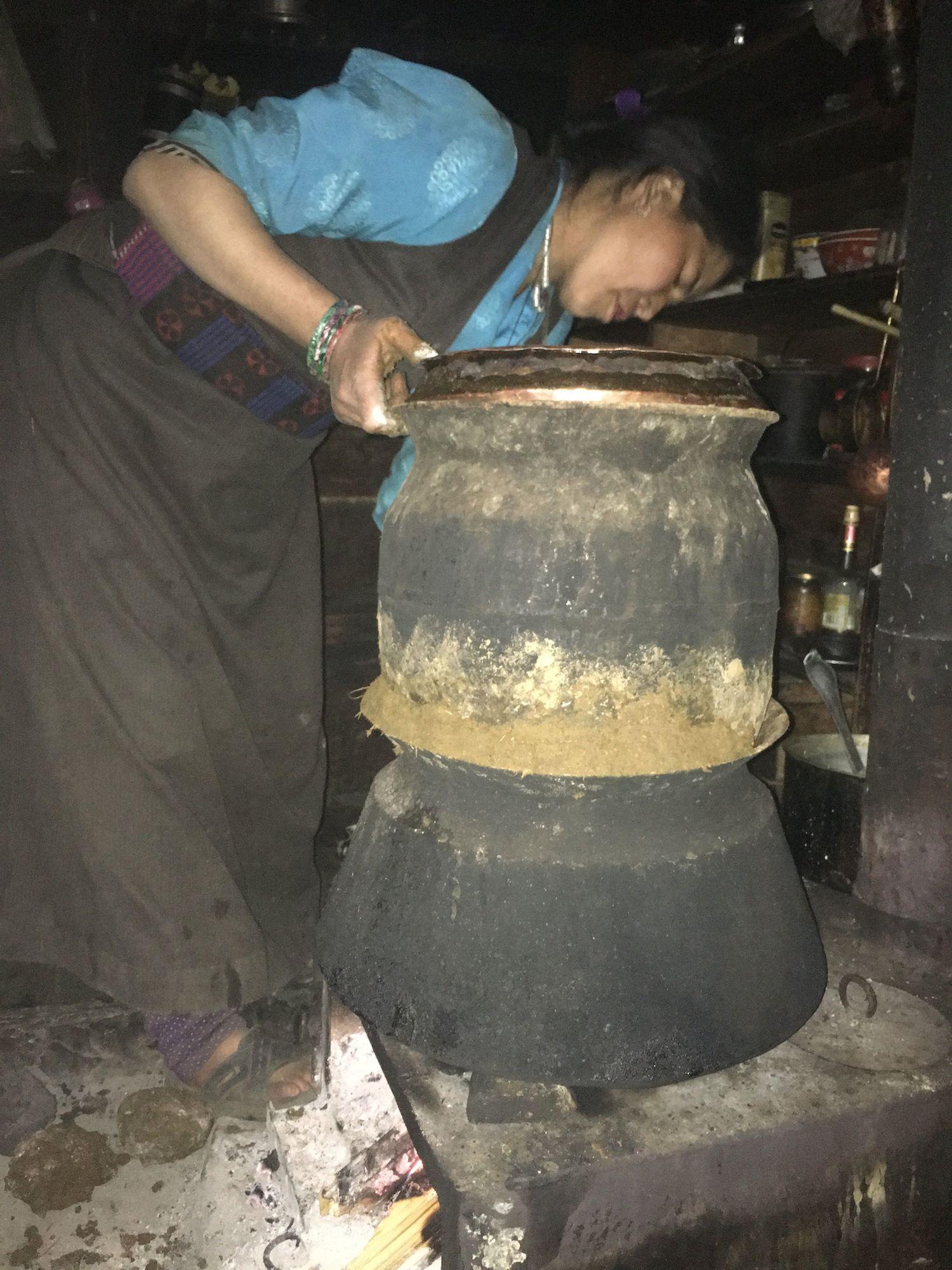 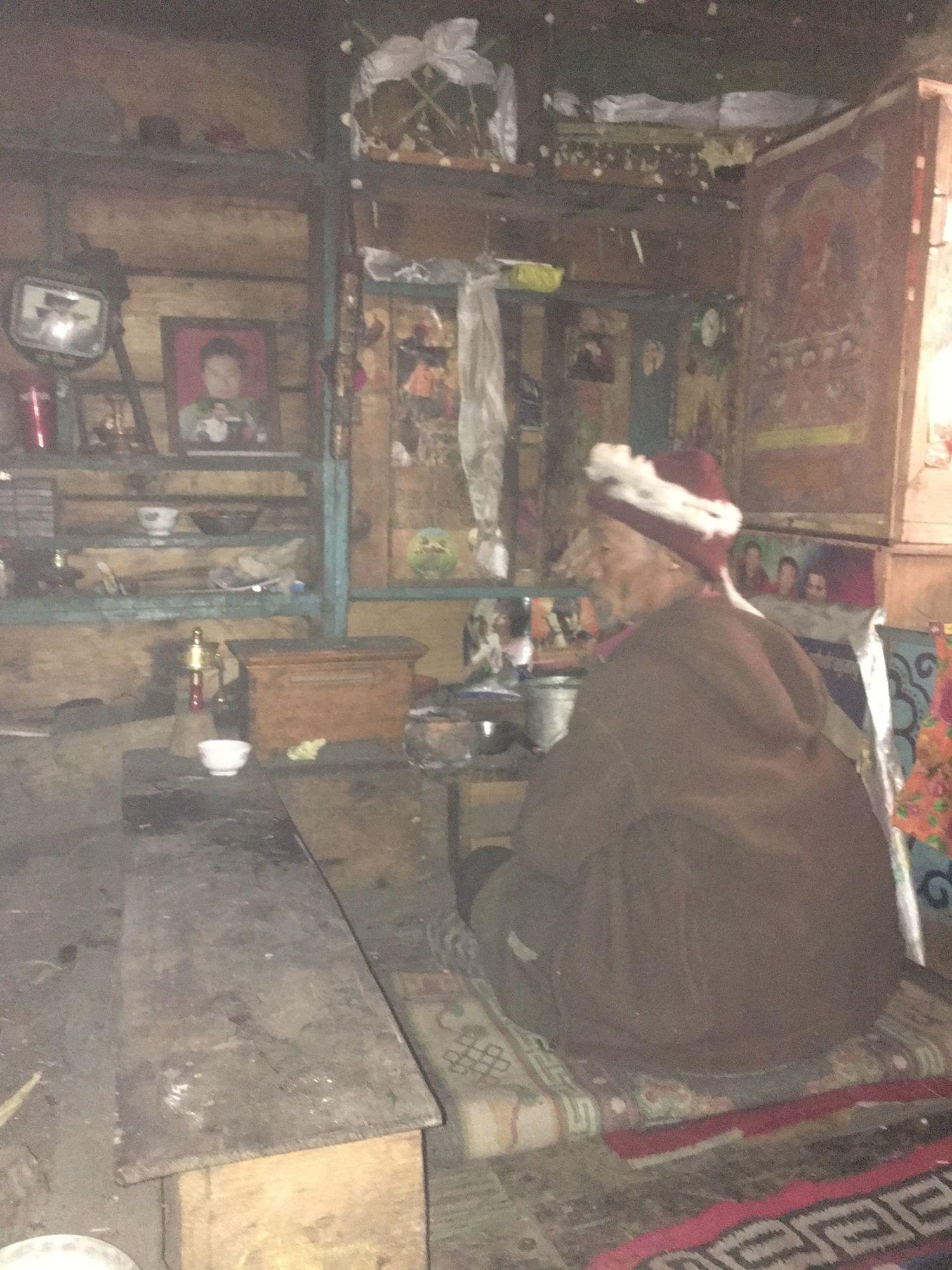 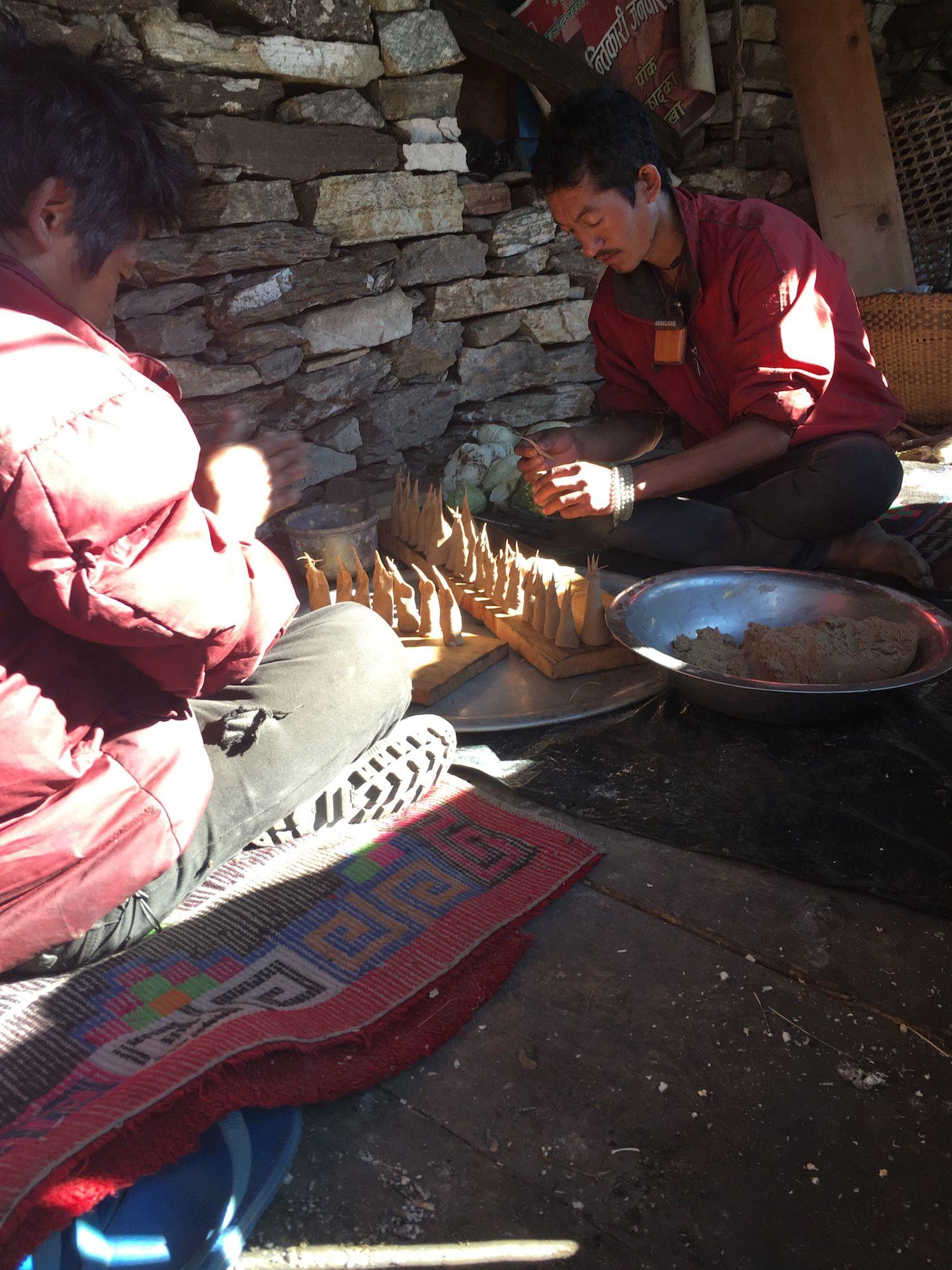 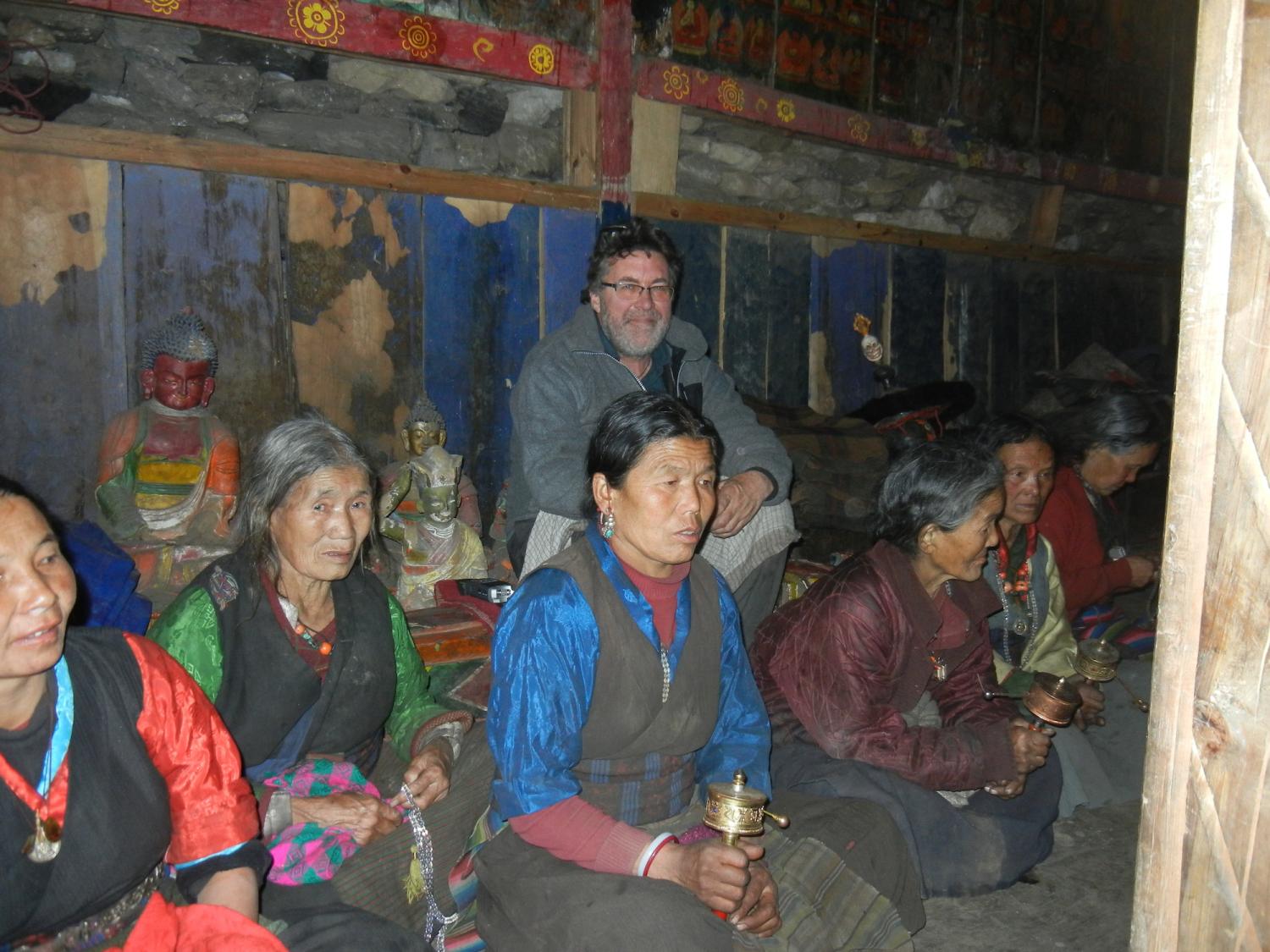 The author with village women in the gompa. 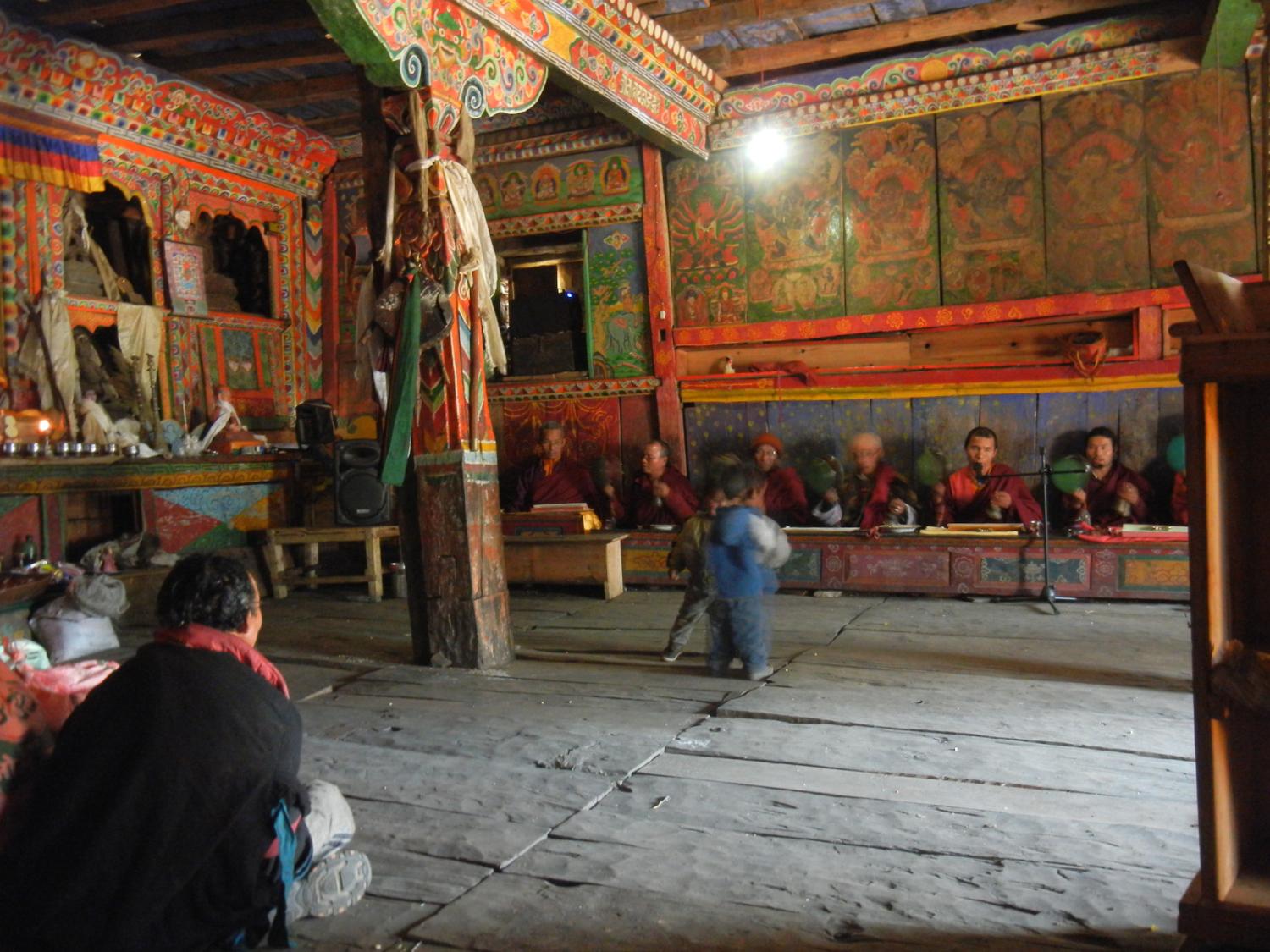 Children play while lamas do puja. 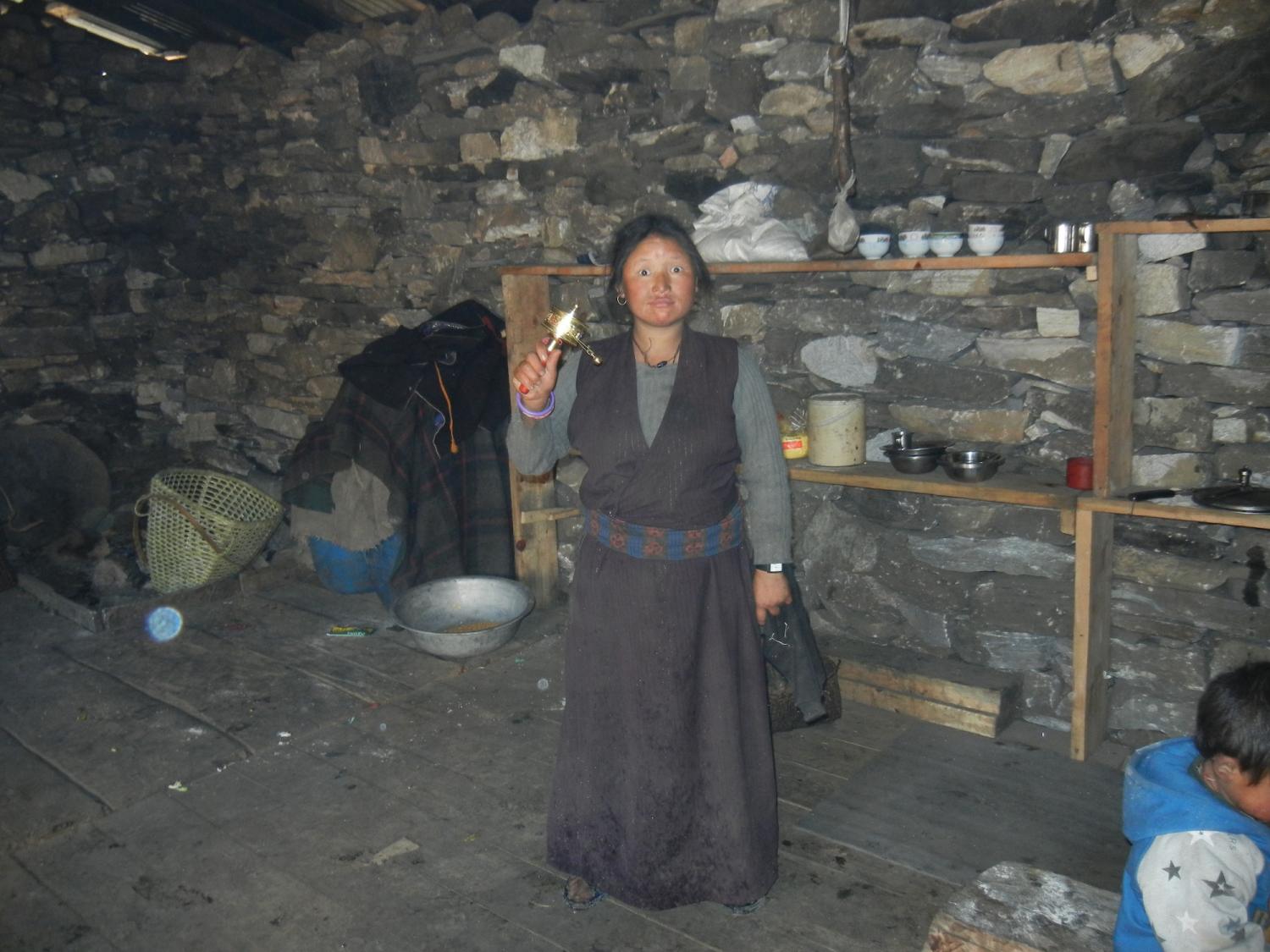 A woman in the gompa kitchen. 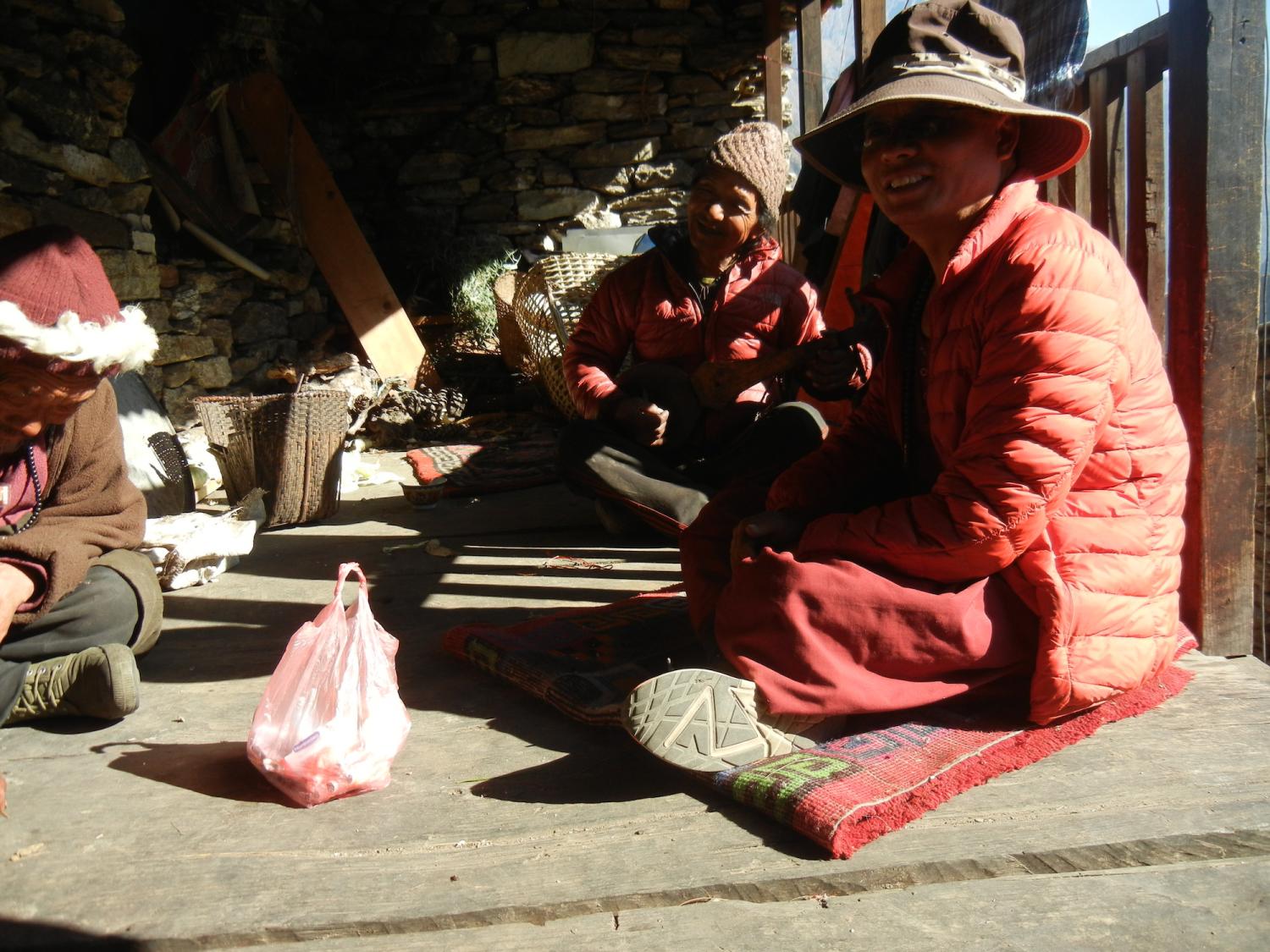 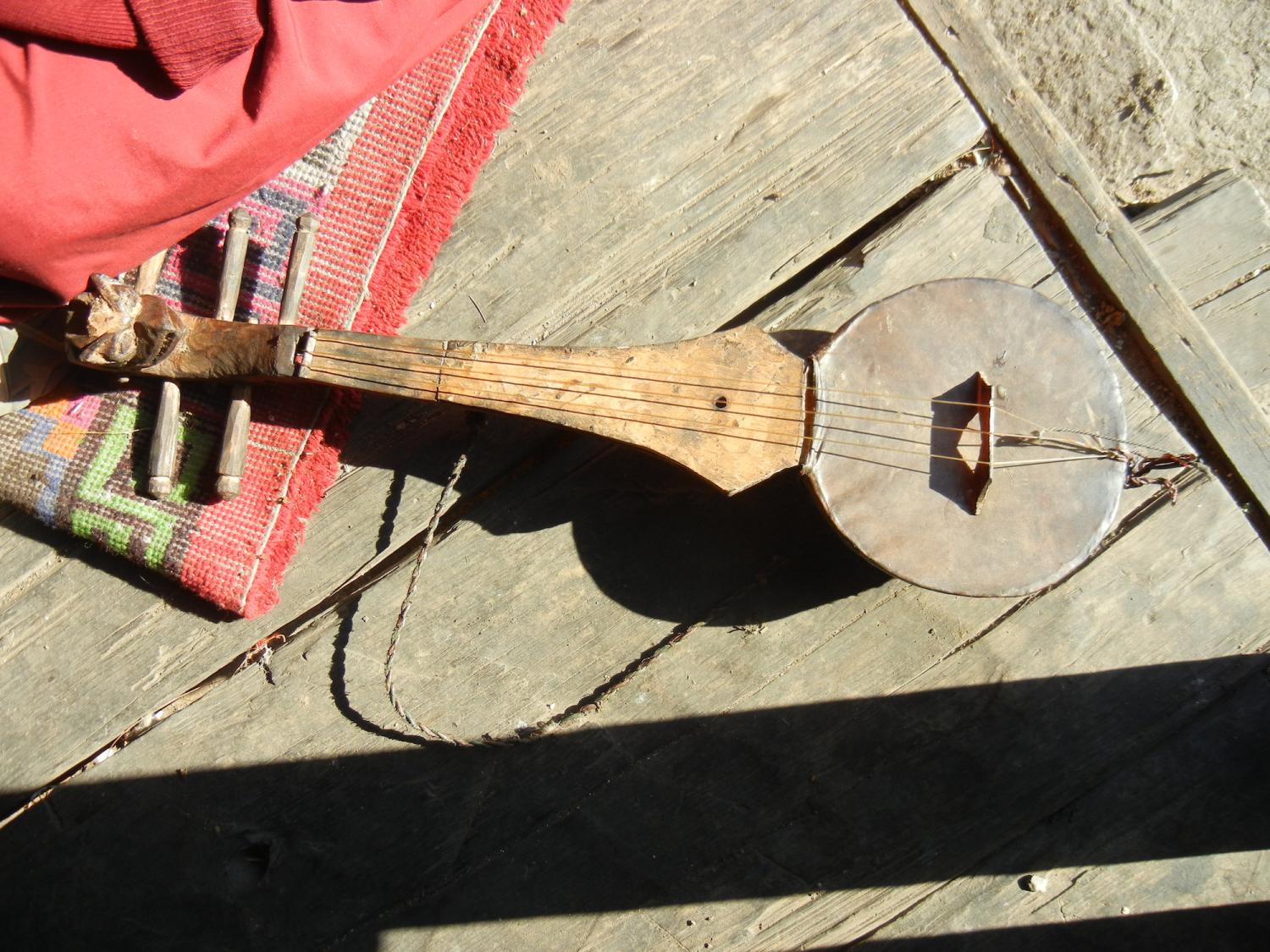 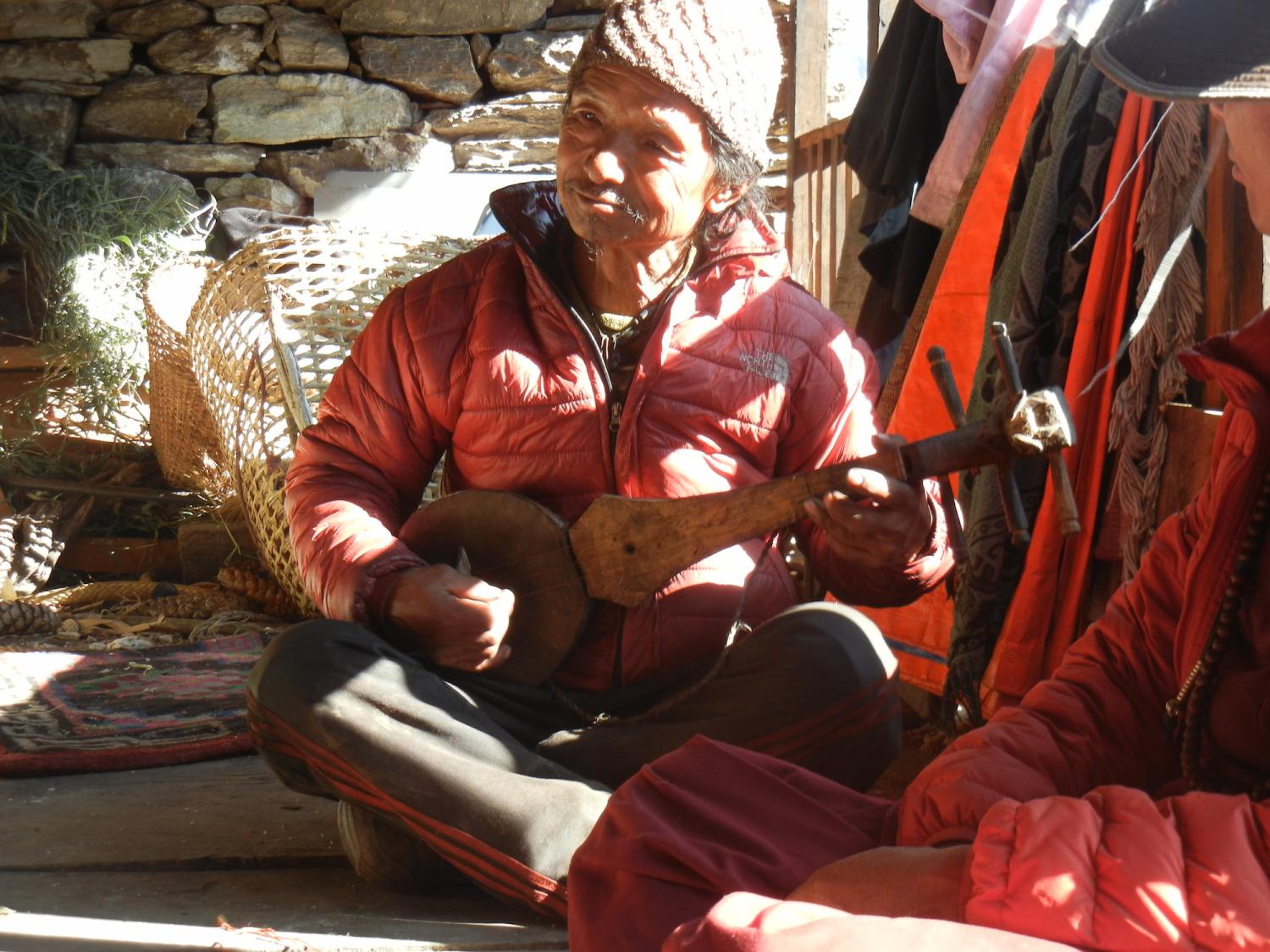 One of the most respected musicians of Tsak village, he also plays a bamboo whistle of his own making. 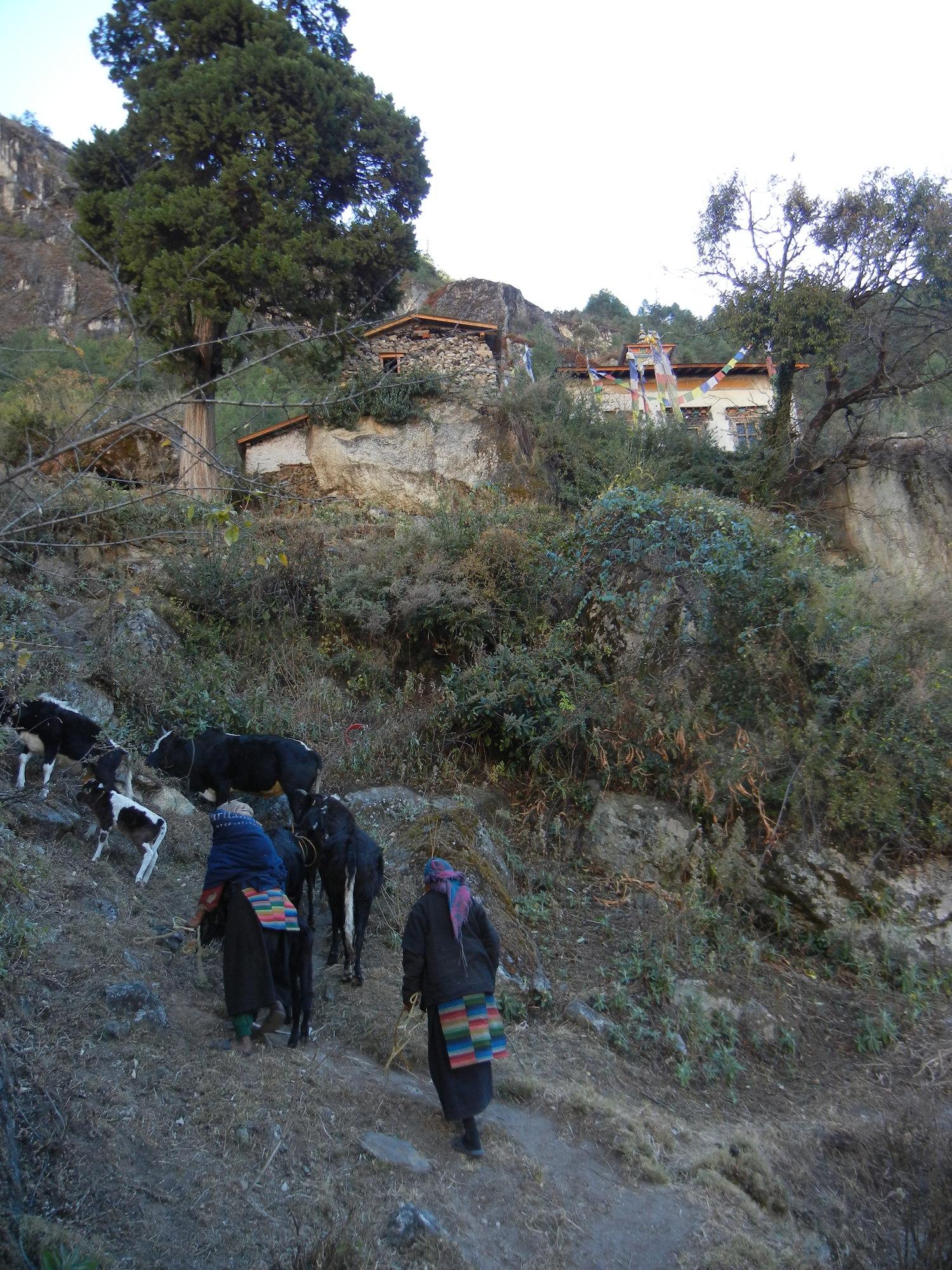 Women herding cattle to grazing lands above the local gompa. 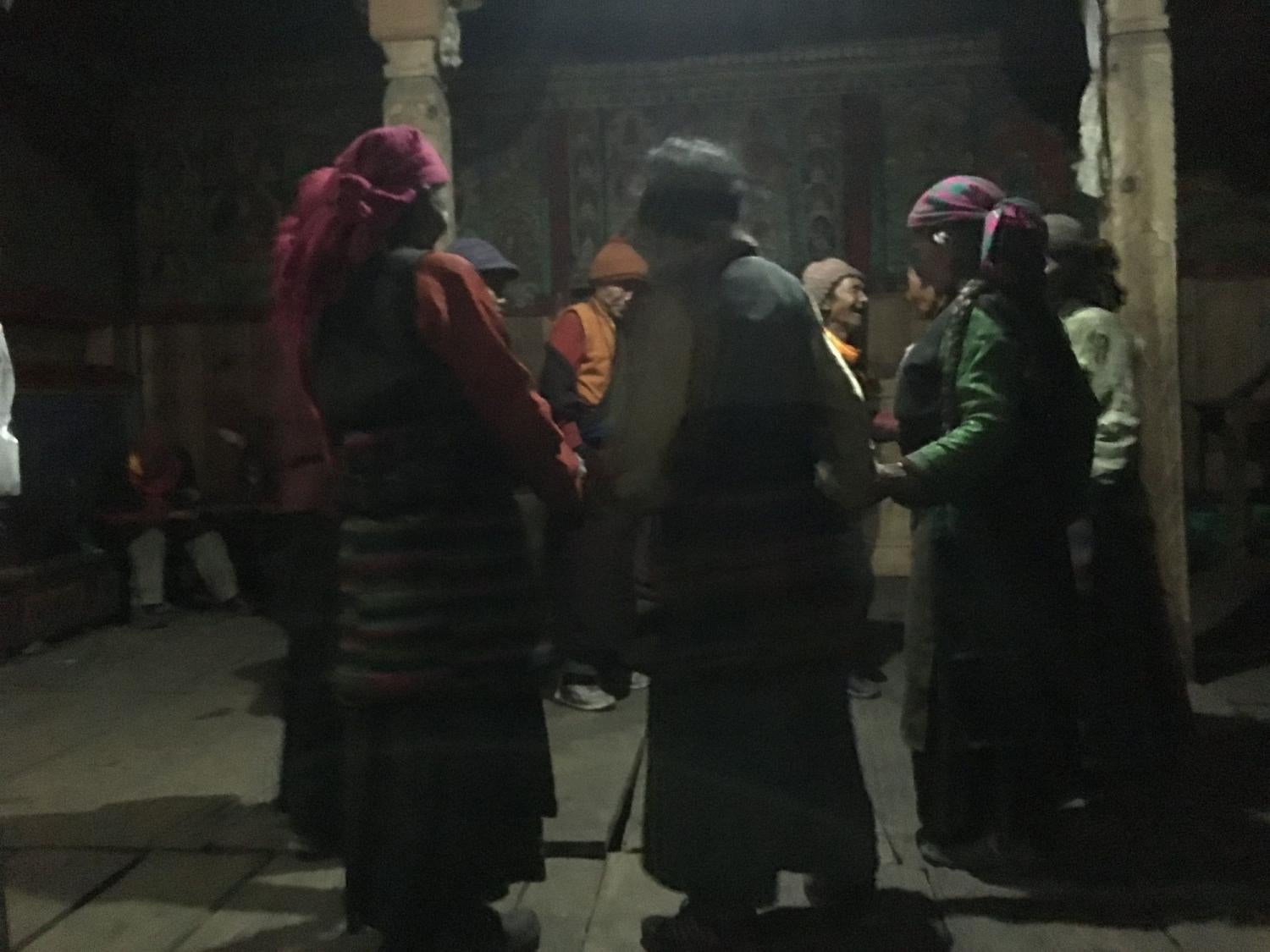 Dancing all night in the gompa after a day of ceremonies and drinking. 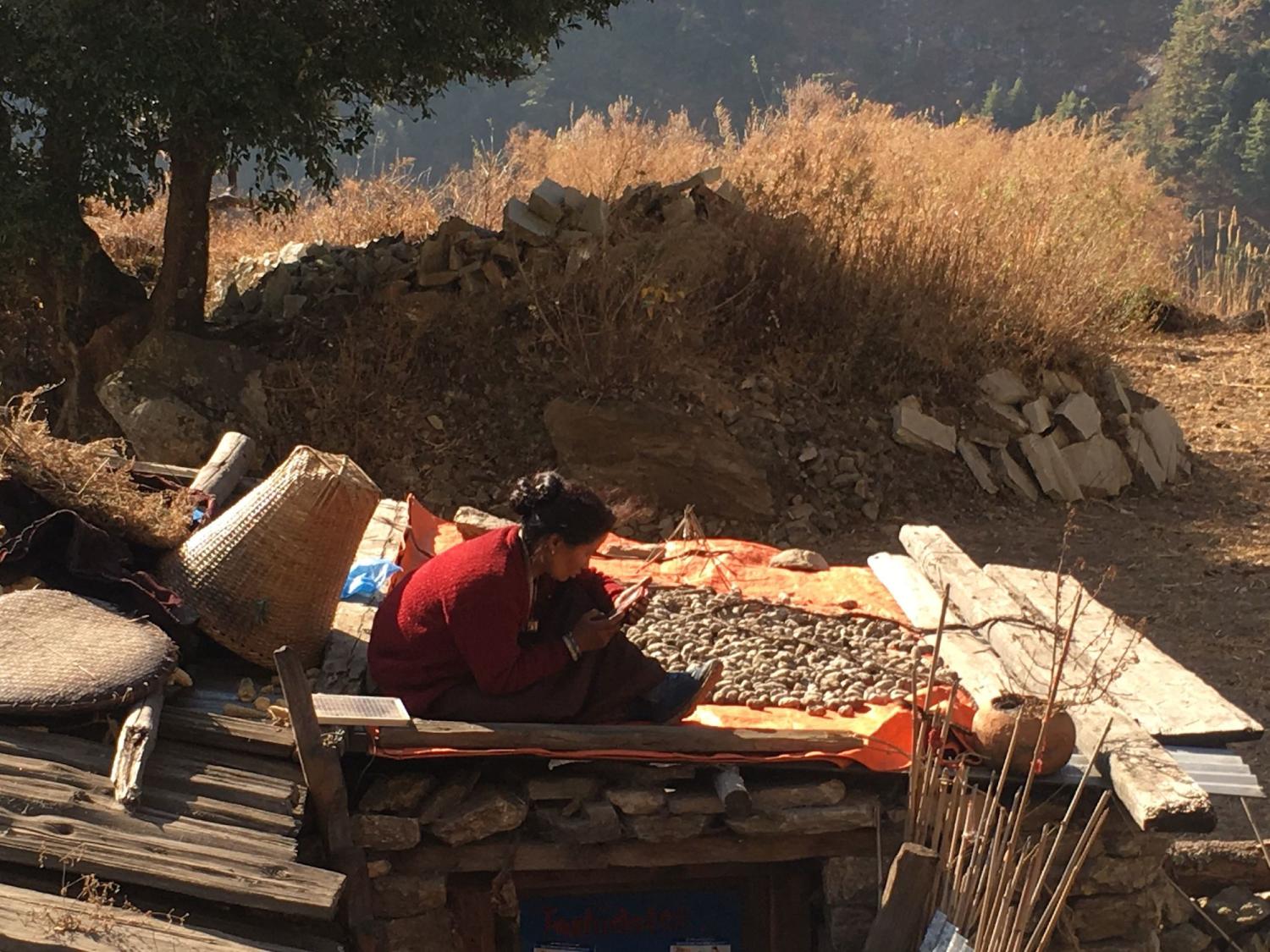 Pema Dekyi (wife of Pema Dhondrup) looking for cell phone signal among her drying yeast pellets. This yeast, stabilized with bone meal, will be used to make the massive supplies of arak needed by the family for the year. 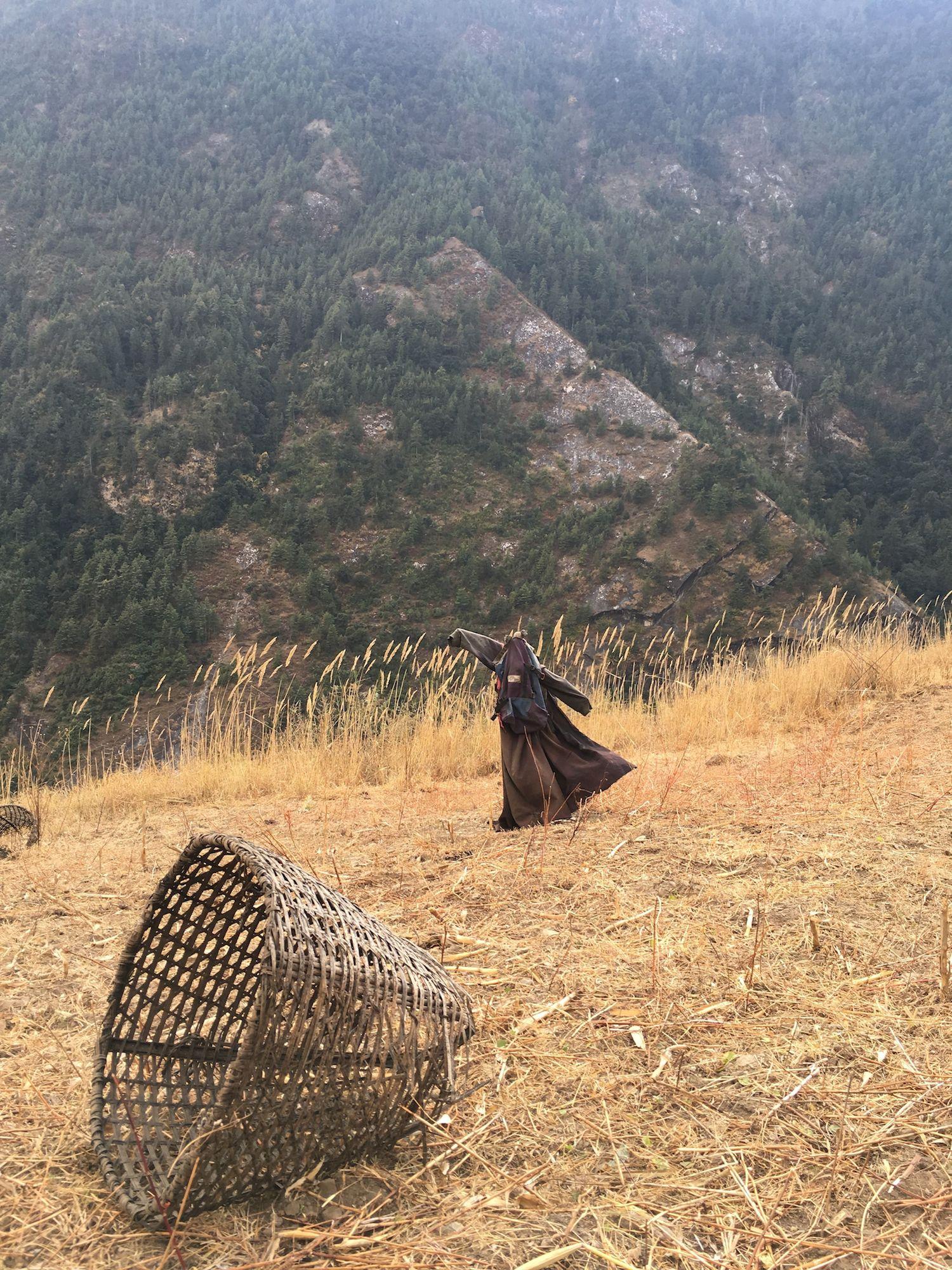 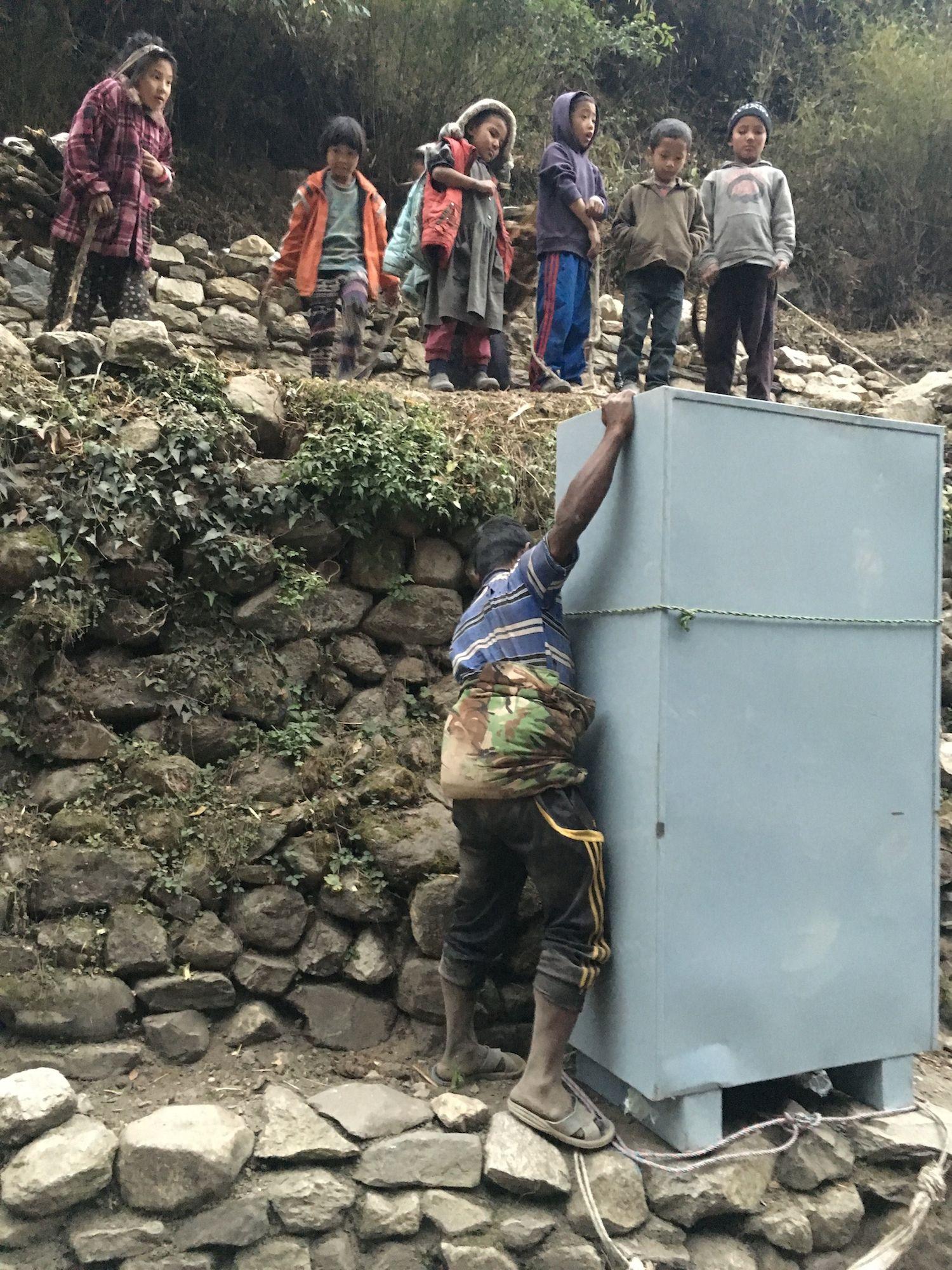 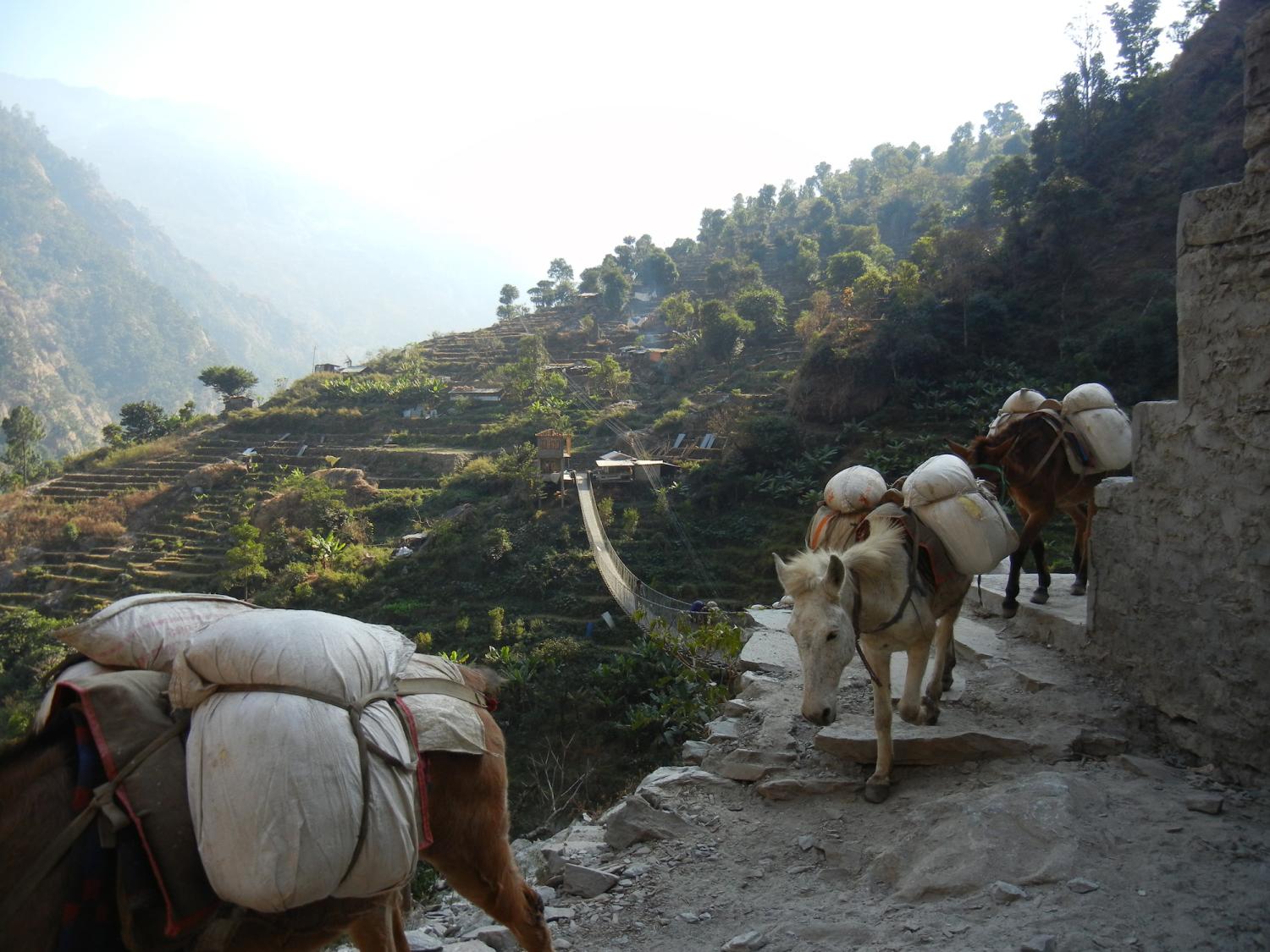 At present, some 60 mule trains ply the route between Nubri-Tsum and Arughat. This will end within a few years when the Chinese-sponsored road, already under construction, is finished. 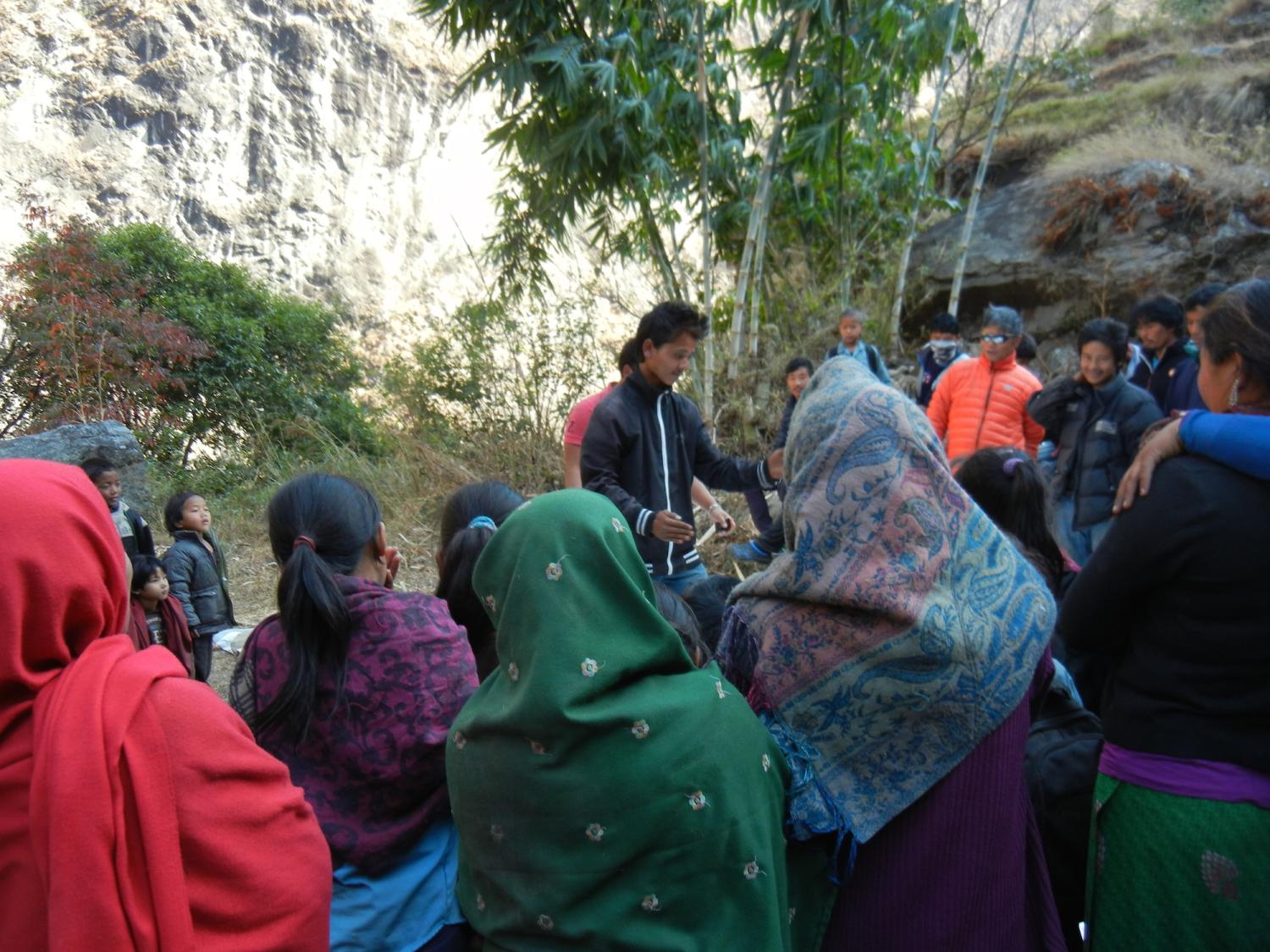 Christian missionaries, often working under the cover of relief organizations like Mountain Child and World Vision, are increasingly present in the Gurung villages that lie en route to Nubri in Gorkha district. They have been less active in the Buddhist enclave of Nubri, though are currently targeting it more intensively. 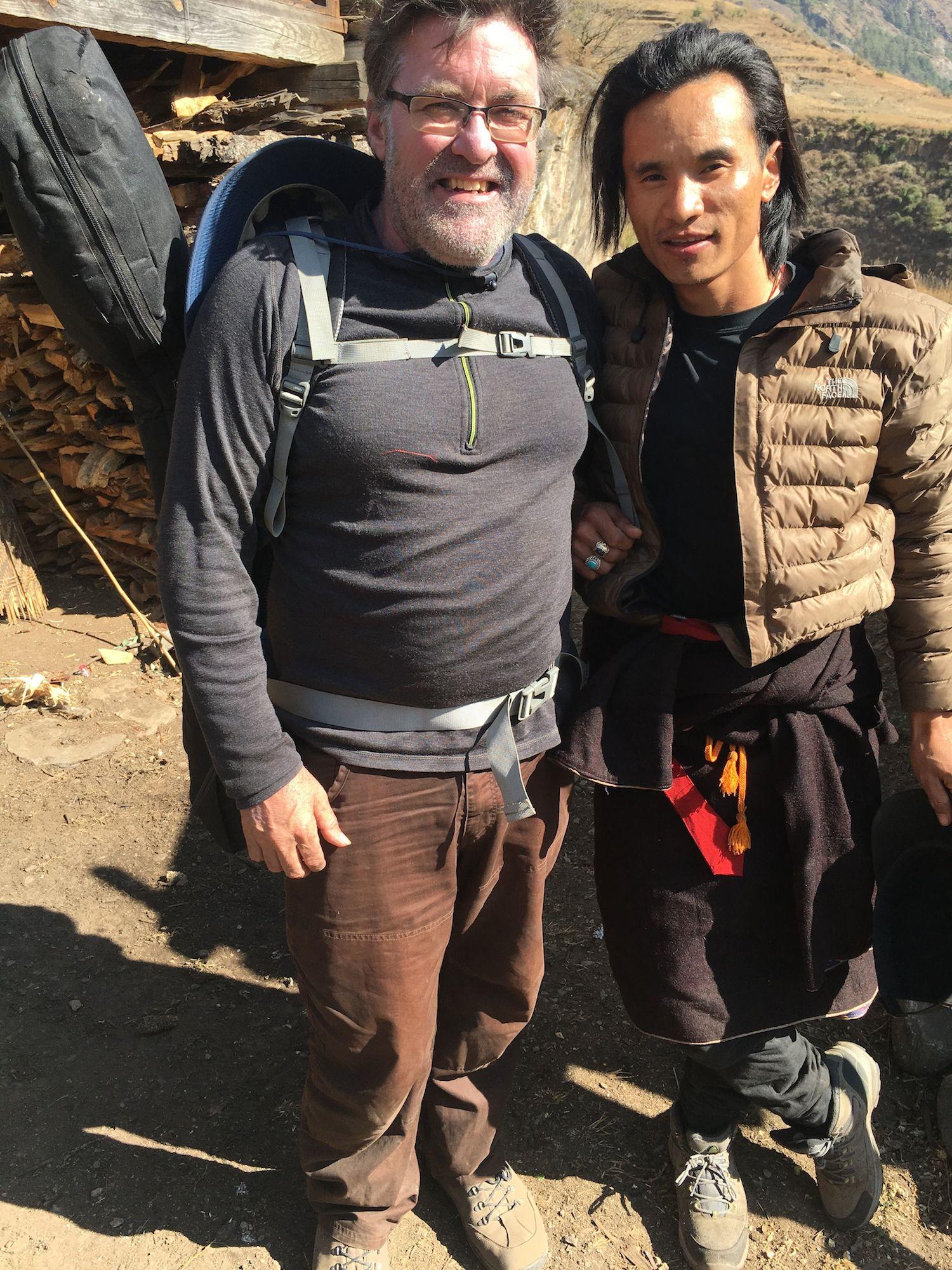 The author with singer, guide, and community leader Pema Dhondrup.

Nubri is an ethnically Tibetan valley in Nepal’s Gorkha District. It runs parallel to the Tibetan border in the deep valley of the Budhi Gandhaki river between the Himalayan peaks of Manaslu and Serang Himal. Nubri’s four main and eight lesser villages vary in elevation from 4,460 meters at Samdo to 2,130 meters at Bihi village. In November and December 2016, I spent five weeks traveling the valley to record folk songs for my dissertation research (funded by a Fulbright-Hays Fellowship).

For the first three weeks, I traveled in a research party with Geoff Childs and E.A. Quinn as they collected breast milk and measured babies for their ongoing longitudinal study of high-elevation human adaptation. We visited villages of Sama, Lho, Li, Sho, Namrung, Ghap, Tsak, Prok, Bihi, and Gyayul. After they finished their work, I remained with friend and well-known singer Pema Dhondrup at his home in Tsak village. In addition to meeting and recording singers in Sama and Prok, I witnessed the dumche (grub mchod), or harvest-season prayer festival in Namrung, as well as a similar one in Tsak. At these festivals, after the lamas (priests) do pujas (ceremonies) all day in the gompa (temple), the villagers stay up all night singing, dancing, and imbibing arak, the local distilled spirit.

Nubri was historically part of the Western Tibetan kingdom of Ngari, and this influence is still reflected in their dialect and lifeways. Among the songs I collected were several töshay (stod gzhas) songs from Western Tibet, as well as a number of changlü (chang glu), or beer-drinking songs. Even though these songs are customarily sung while celebrating and drinking, their subject matter is primarily Buddhist, evincing the deep religious faith of the Nubri people. While there are now several monasteries in Nubri, they have traditionally adhered to the Nyingma school of Tibetan Buddhism. Within this sect, it is common for ngakpa (married lamas) to perform priestly functions in village temples rather than monasteries. Each village in Nubri still has its village gompa and ngakpas who do rituals to bless houses and fields, heal the sick, and propitiate local mountain spirits and protectors.

The traditional lifeways of Nubri are now under serious pressure to change under forces of globalization and modernization. Up to seventy percent of Nubri youth are now growing up in Kathmandu and India, where parents send them for education. Thus, they are not learning cultural traditions from childhood, as they would have in earlier times. In Kathmandu, many Nubri youth, as well as youth of other indigenous Tibeto-Burman Nepali groups, are learning traditional cultural practices with the exiled community of Tibetan refugees, who are seen as knowledgeable culture-bearers. This causes some tension as the Himalayan Nepalis jealously guard their local identities and resist being labeled as “Tibetan” even as they put themselves under the tutelage of diasporic Tibetans in such sites as the Nepal Tibetan Lhamo Association, or Lhamo Tshokpa (Tibetan Opera Association) in Boudha, Kathmandu. After collecting songs in Nubri I have followed Nubri and other Nepali Himalayan youth as they learn Tibetan opera at the Lhamo Tshokpa.