Dolpo, The Hidden Land with Dorje Dolma, January 31 at 5pm 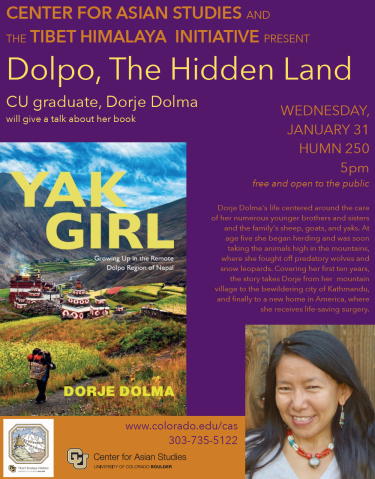 Please join us as Dorje Dolma talks about her new book Yak Girl: Growing Up in the Remote Dolpo Region of Nepal!

Dorje Dolma was born in the remote Dolpo region of Nepal, high in the mountains bordering Tibet. She was the oldest of eleven children, only six of whom survived the harsh conditions of their lives. Dolpo had no running water, electricity, motor vehicles, phones, school, or doctors, other than the local lamas, trained in the use of herbs and prayer. Dorje began herding the family’s goats and sheep at age five and by seven she was defending them from attacks by wolves and snow leopards.

When she was ten, Dorje’s parents took her on a month-long trek to Kathmandu to find help for a serious health condition. There they encountered Westerners who arranged to bring Dorje to the United States and get her the surgery she needed to save her life.

Adopted by her new American family, Dorje eventually graduated from the University of Colorado with a degree in Fine Arts in 2008. She worked as an early childhood teacher in Boulder, Colorado, and now continues to develop her art. Her website is dorjearts.com. Dorje just released her first book:Yak Girl: Growing Up in the Remote Dolpo Region of Nepal