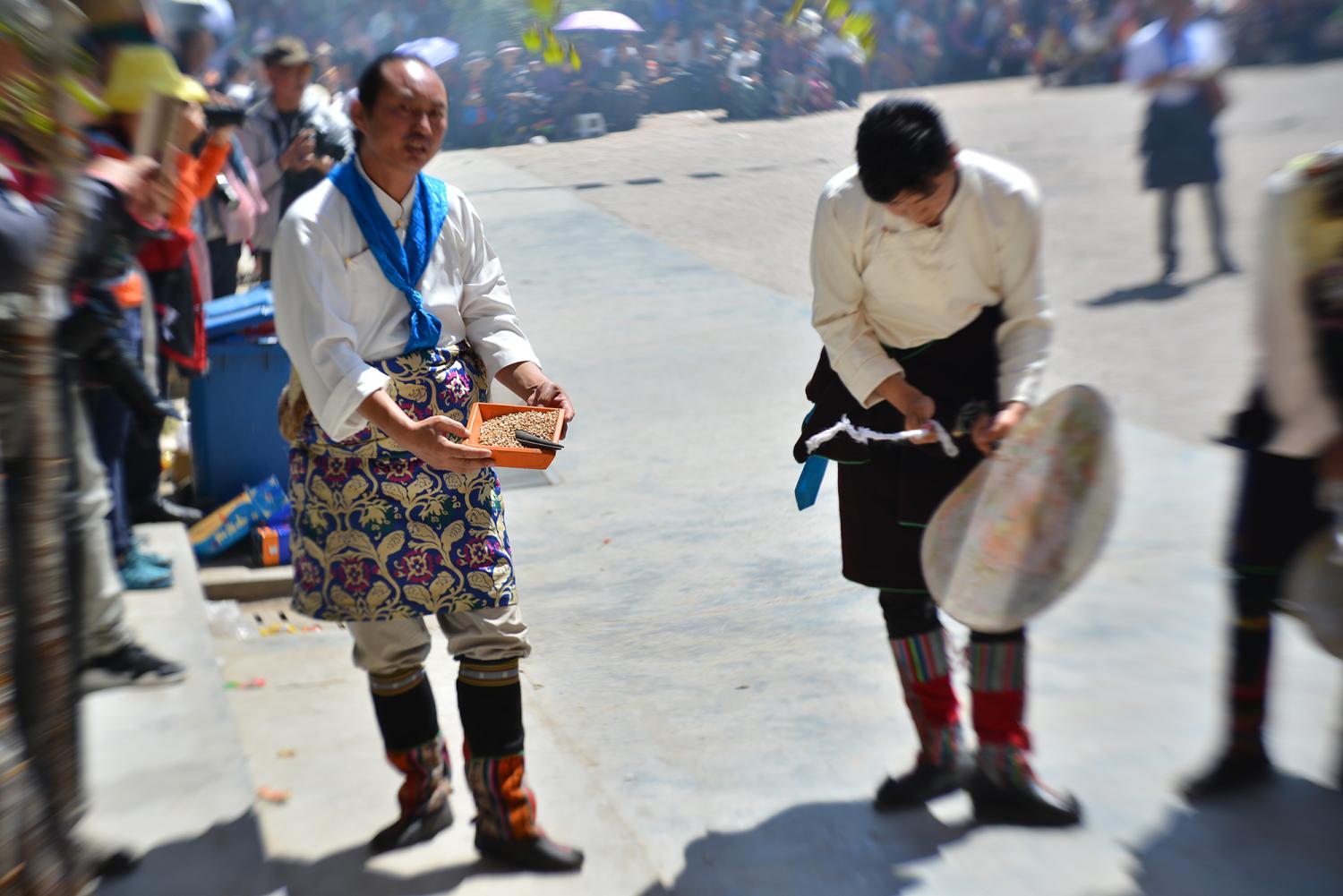 The La ba is pictured at left, holding a box of grain. He will shout and sputter his lips for the entire day as he carries out a number of ritual activities. 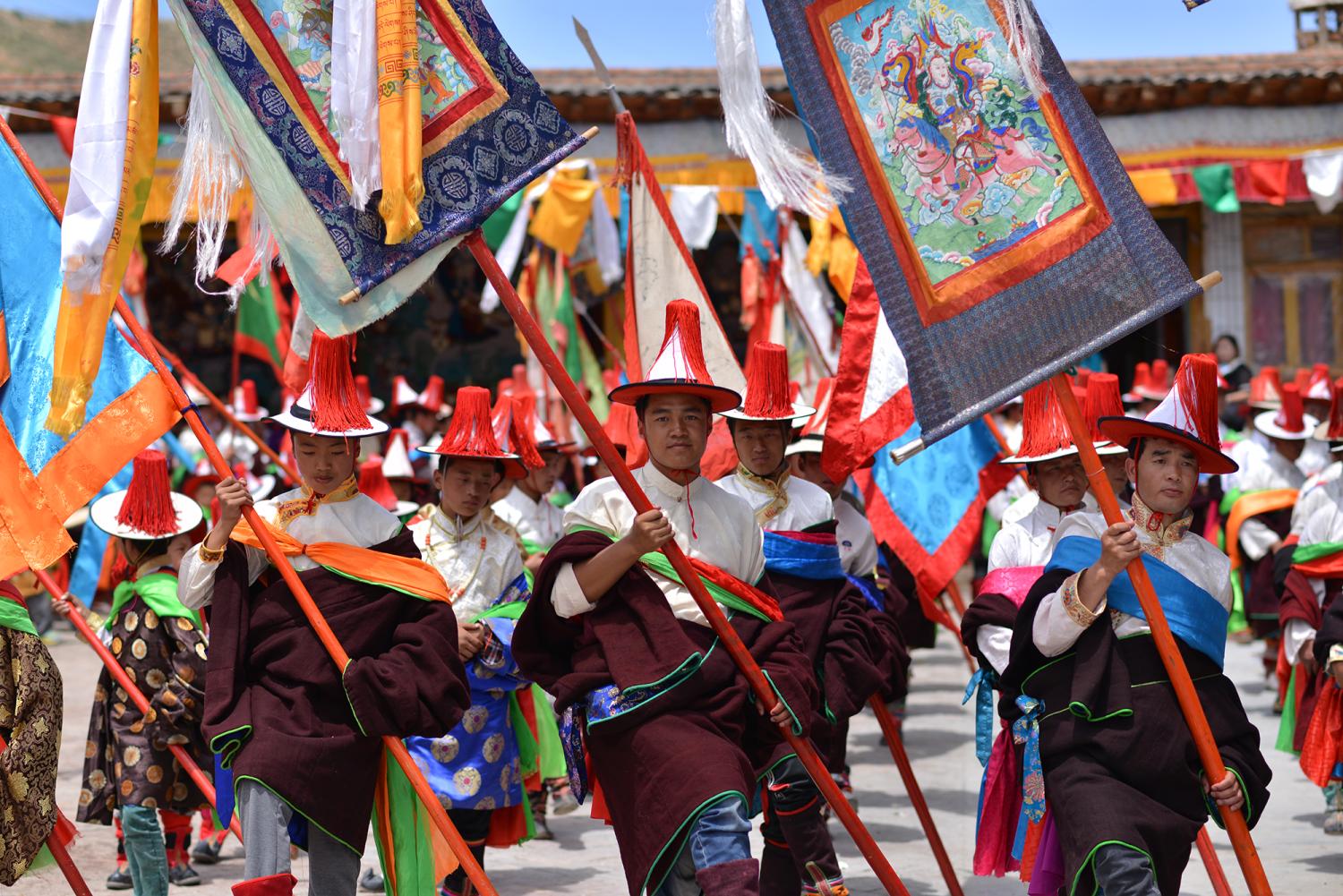 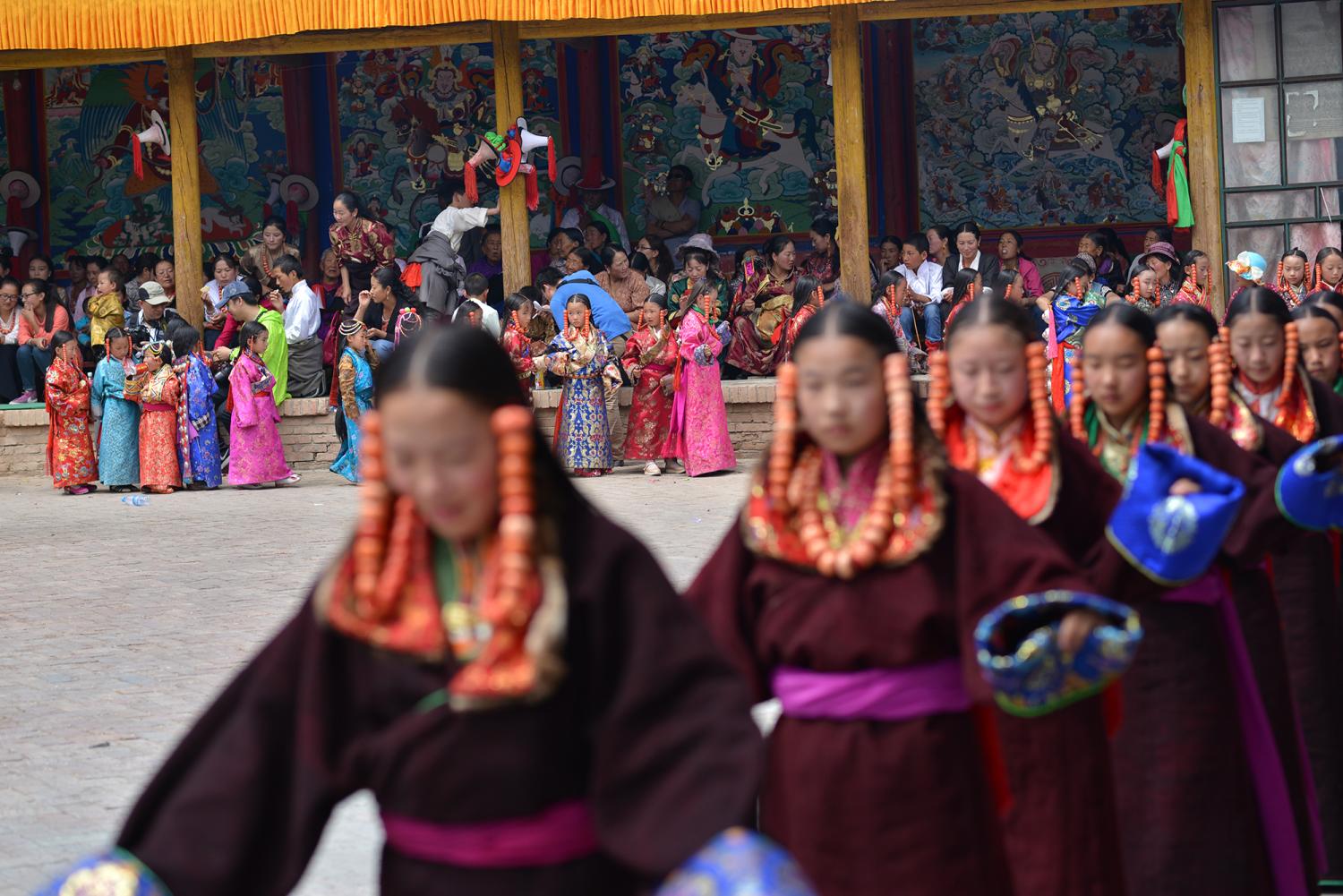 The audience includes non-participating villagers from Sadjye, men from surrounding villages, and visitors including Han Chinese and foreigners such as myself. Outsiders tend to take many photos and sometimes get in the way. In 2014 the La pa ejected myself and several European tourists from the temple veranda - we were in the way. Sometimes tourists also inadvertently steal the seats of locals. Ticket fees are not charged. 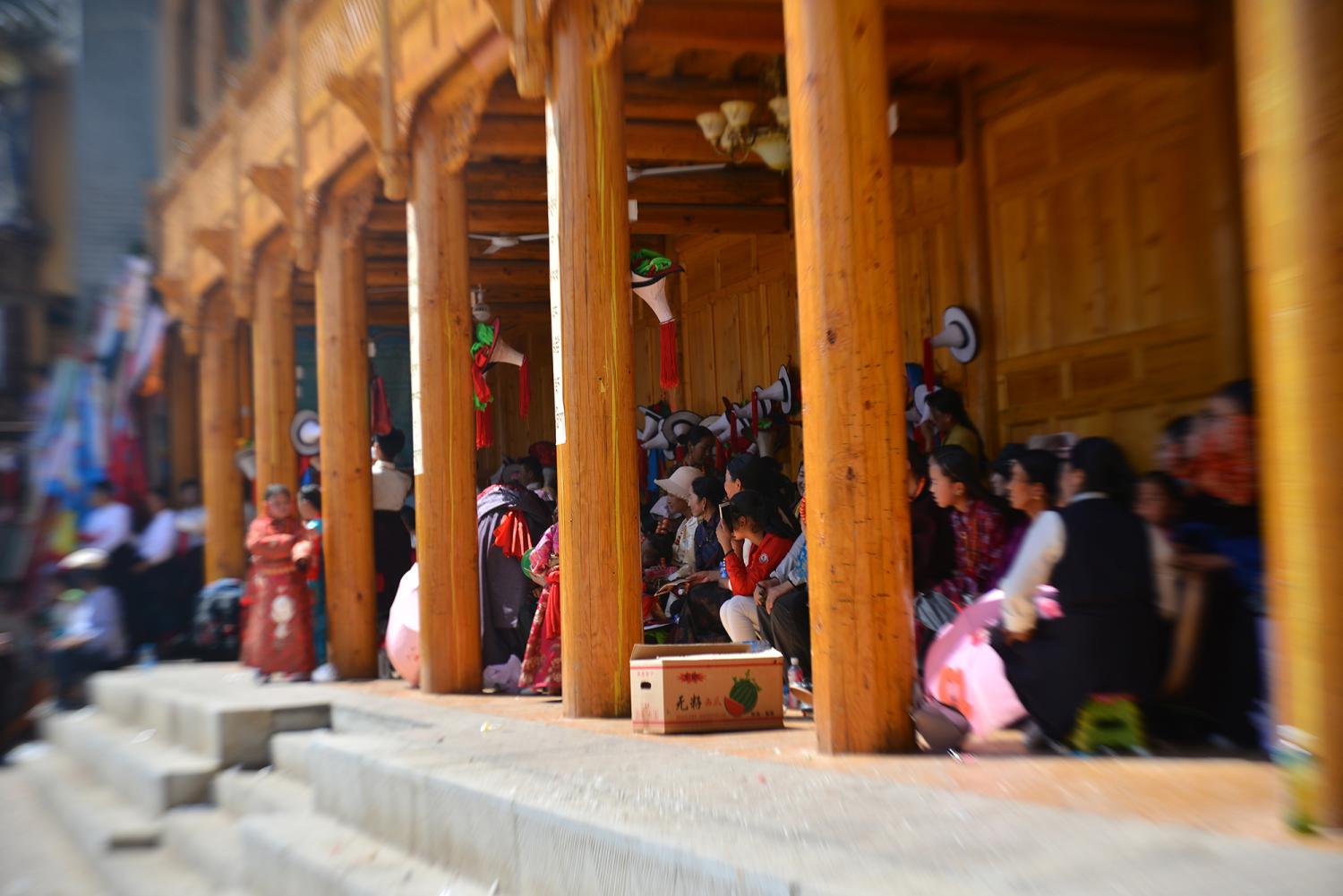 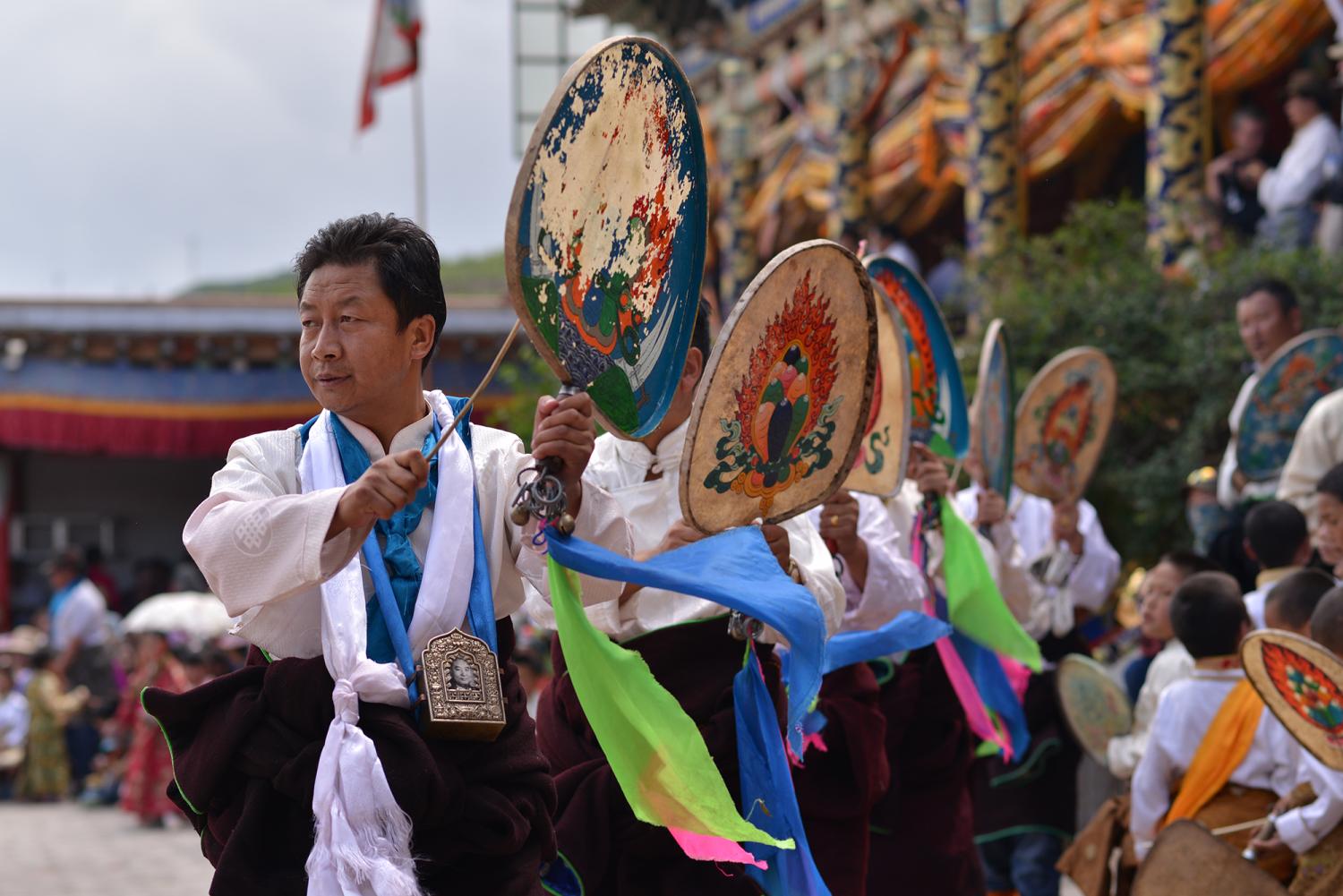 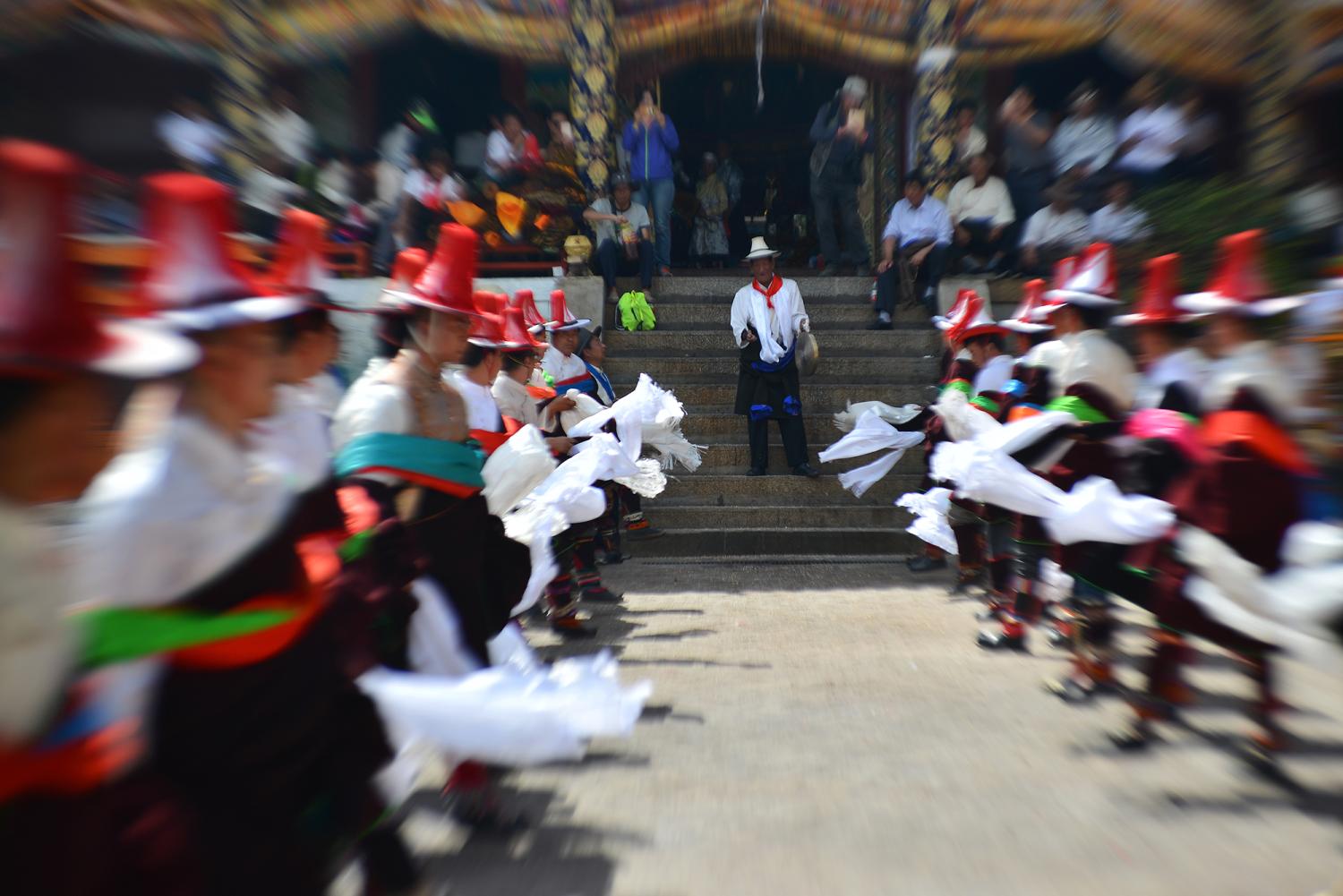 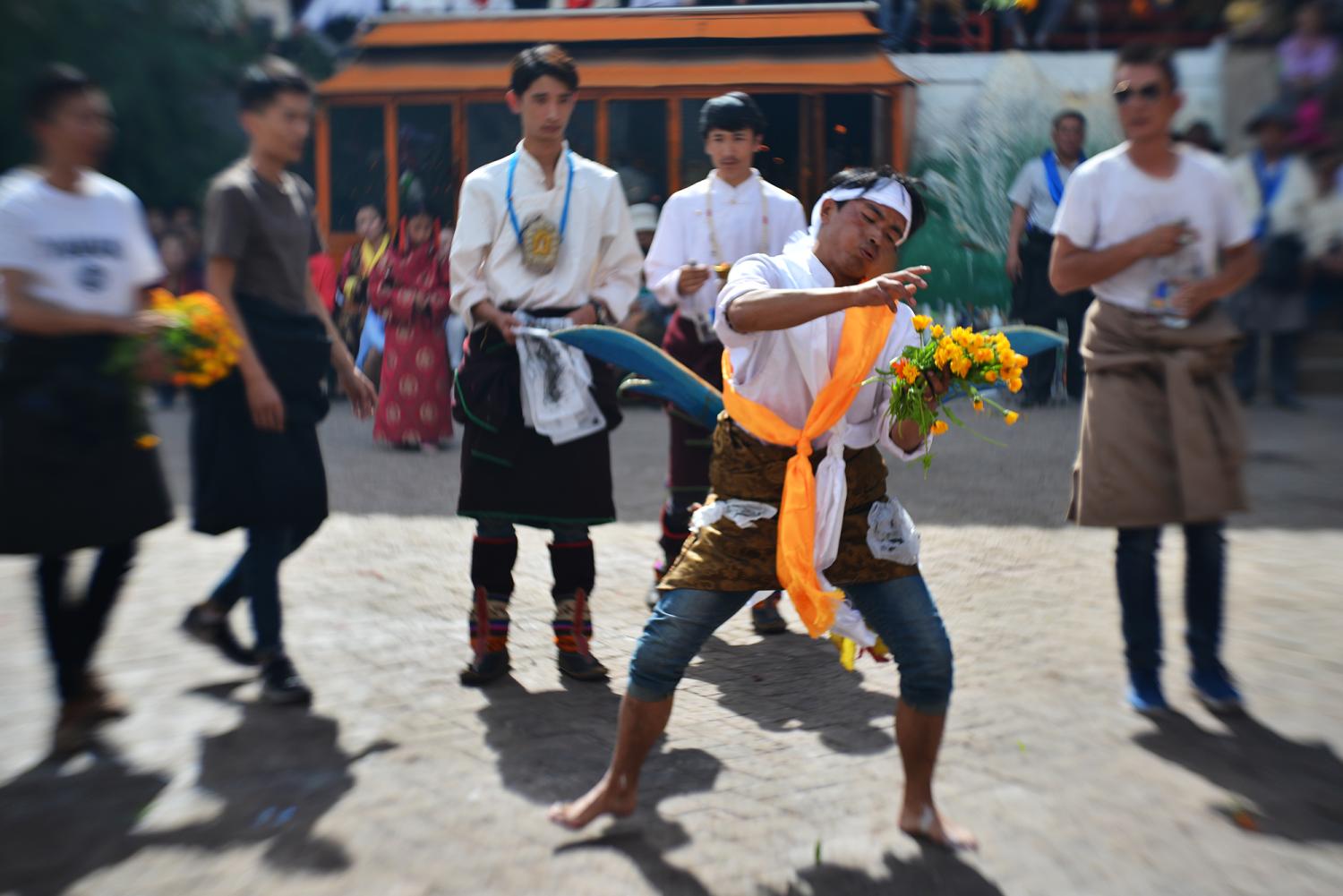 The Anye Makhon (A mye dmag dpon ཨ་མྱེ་དམག་དཔོན) dance returned to Sadjye in 2017 after a decade plus absence due to the passing of the former dancer. It includes sword play and the kinetic tossing of burning paper, grain, and alcohol. 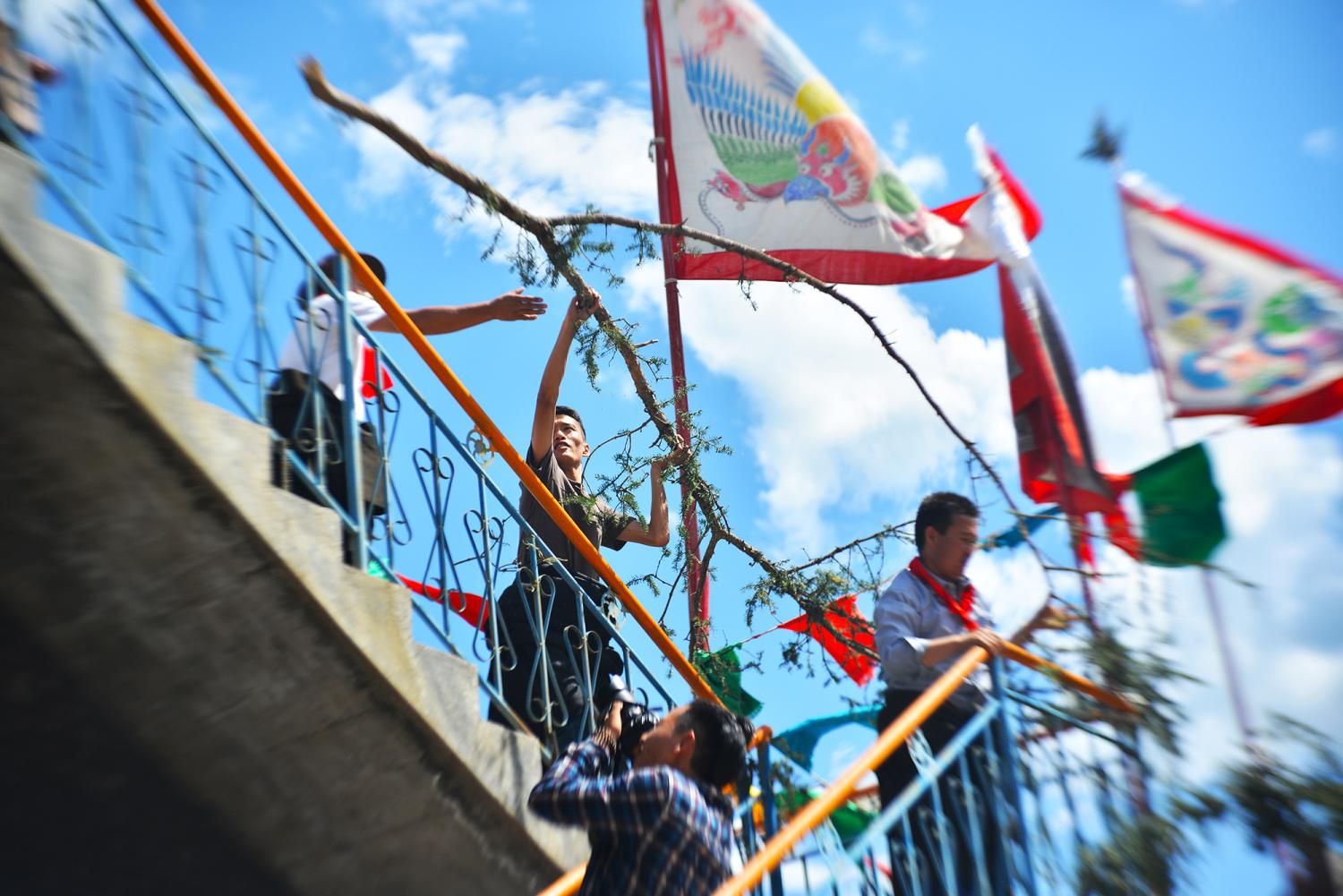 Wood is hoisted to the altar above the temple’s entry gate, where it smolders and gives off a strong sappy scent and smoke. 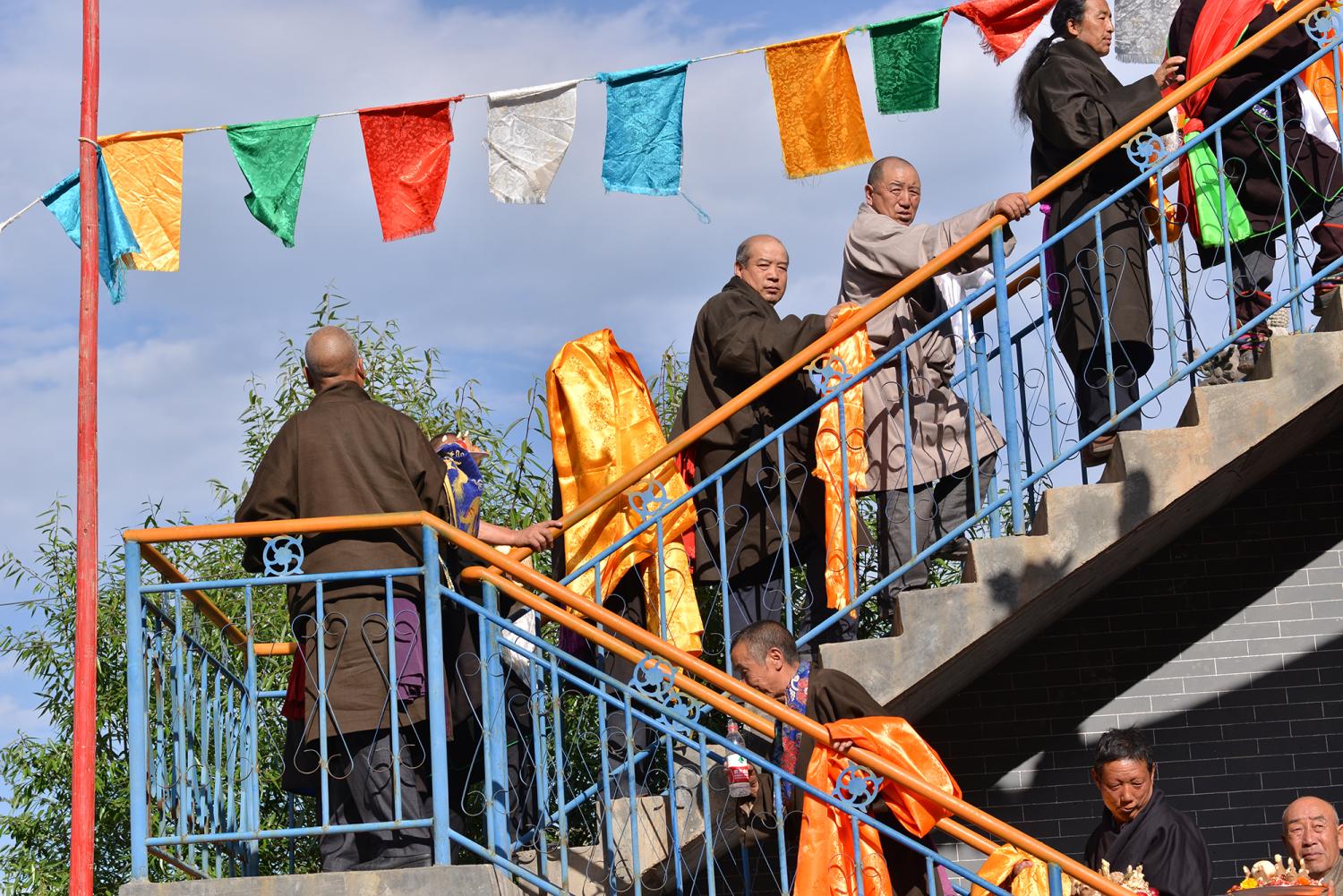 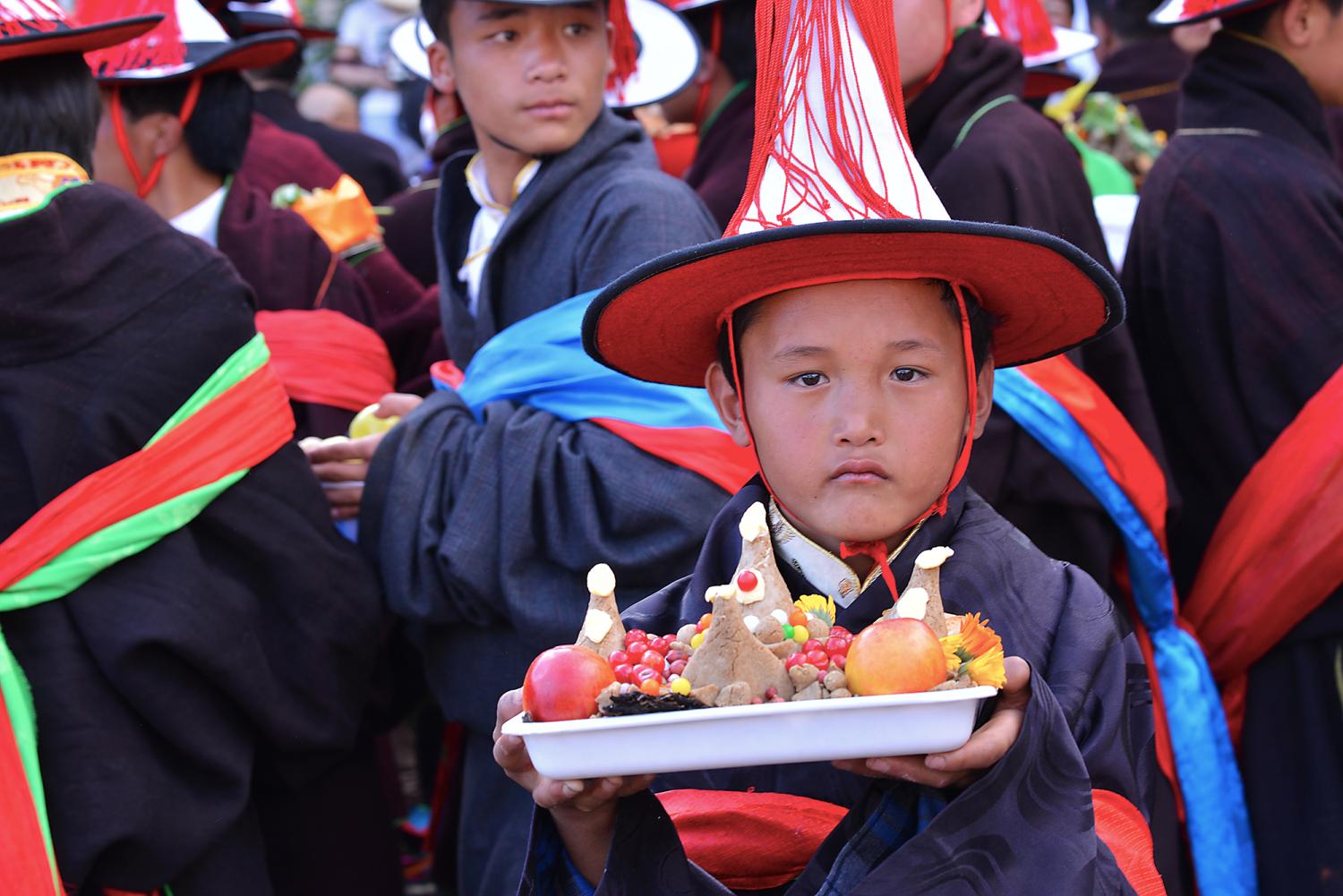 Sang pulpa (bsang phul pa བསང་ཕུད་པ། is the giving and immolation of offerings include Tsampa dough sculptures, khadak scarves, and, most importantly bsang, a scented offering. 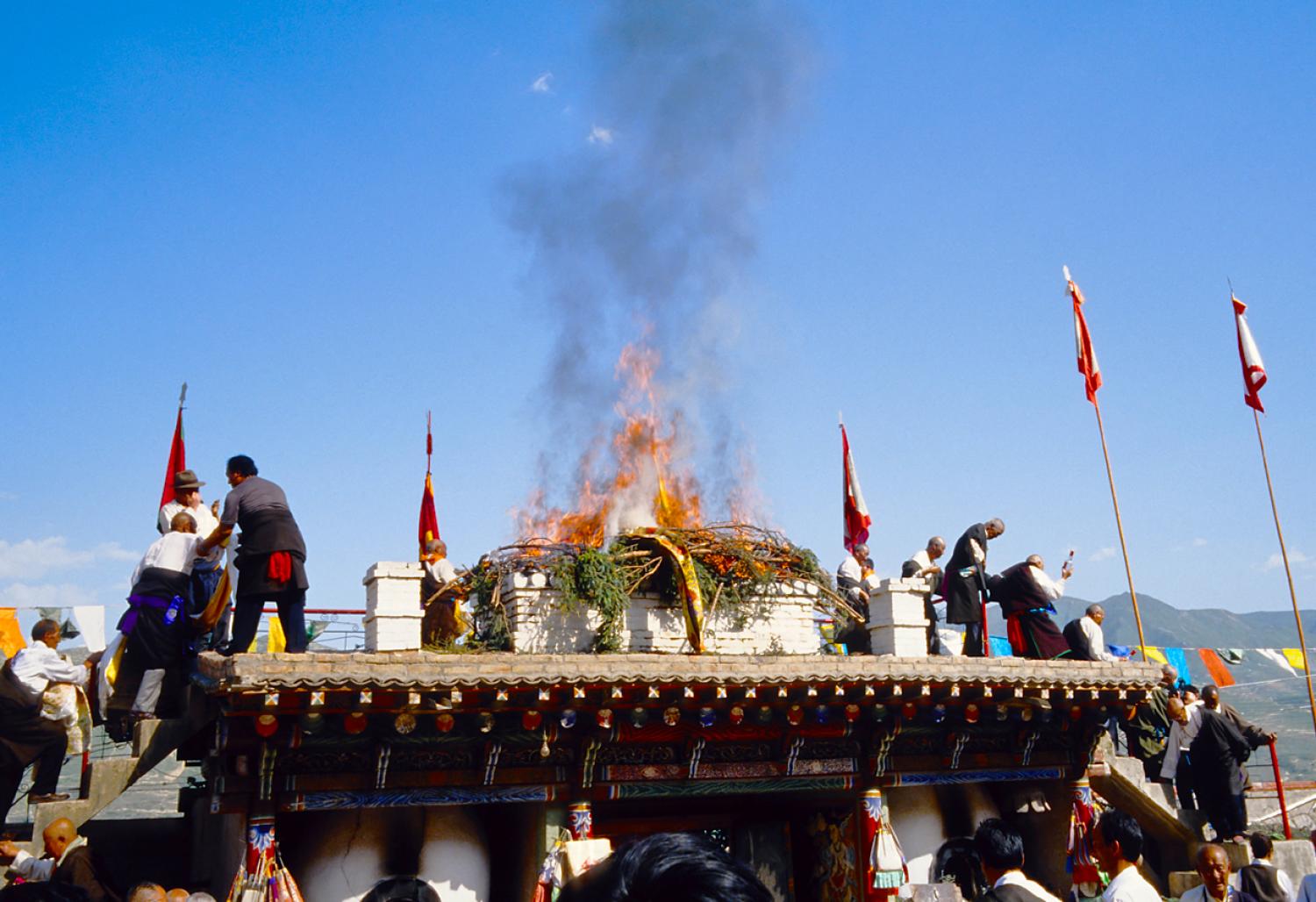 Between 2010 and 2014 the offering altar was rebuilt to be significantly larger. Just seven years ago, the grounds for the festival were much smaller and many fewer tourists came to see it. Because of improvements to roads, more tourists are now able to enter the city. Information about important festival dates can also be easily shared over social media. (Photo taken in 2010). 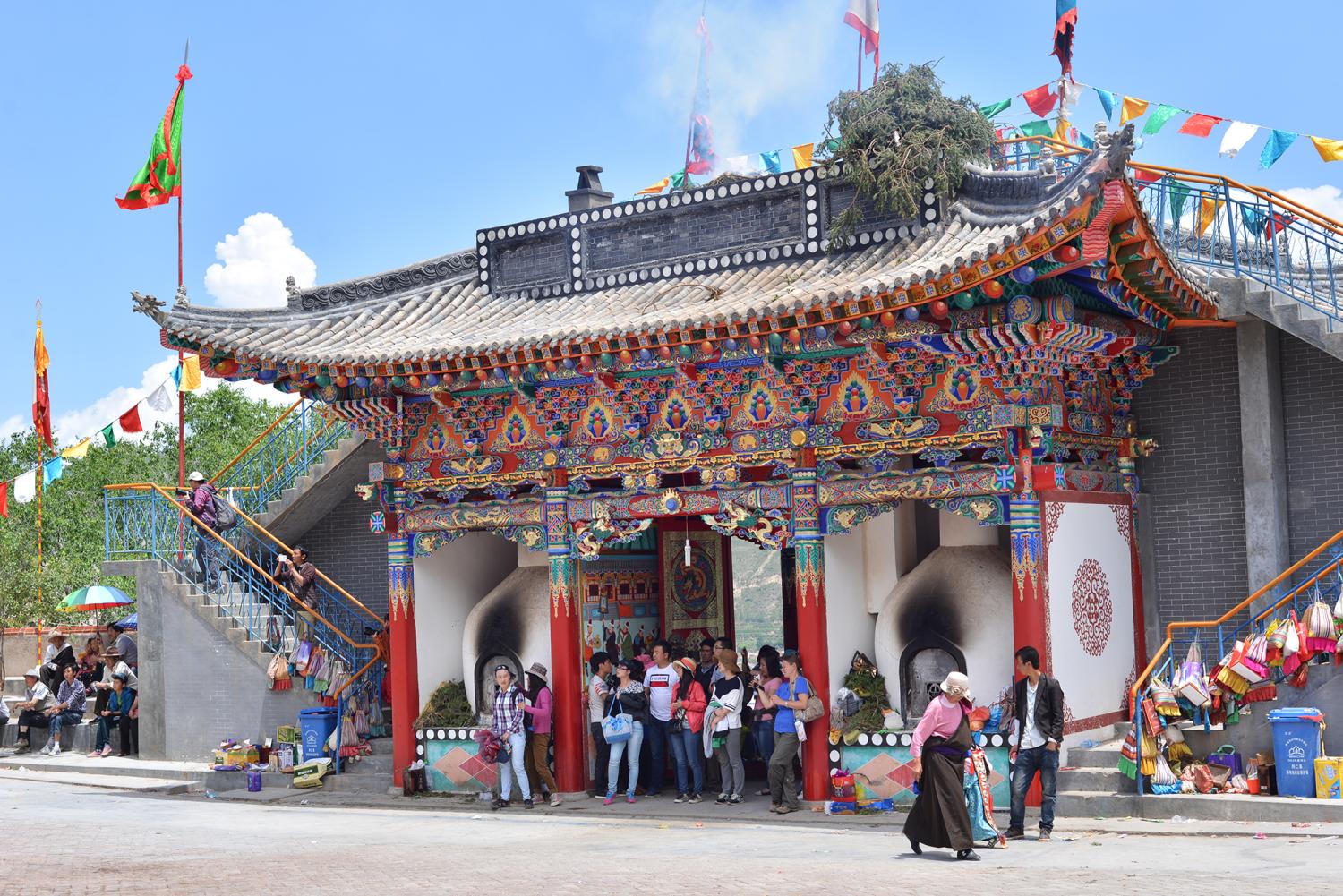 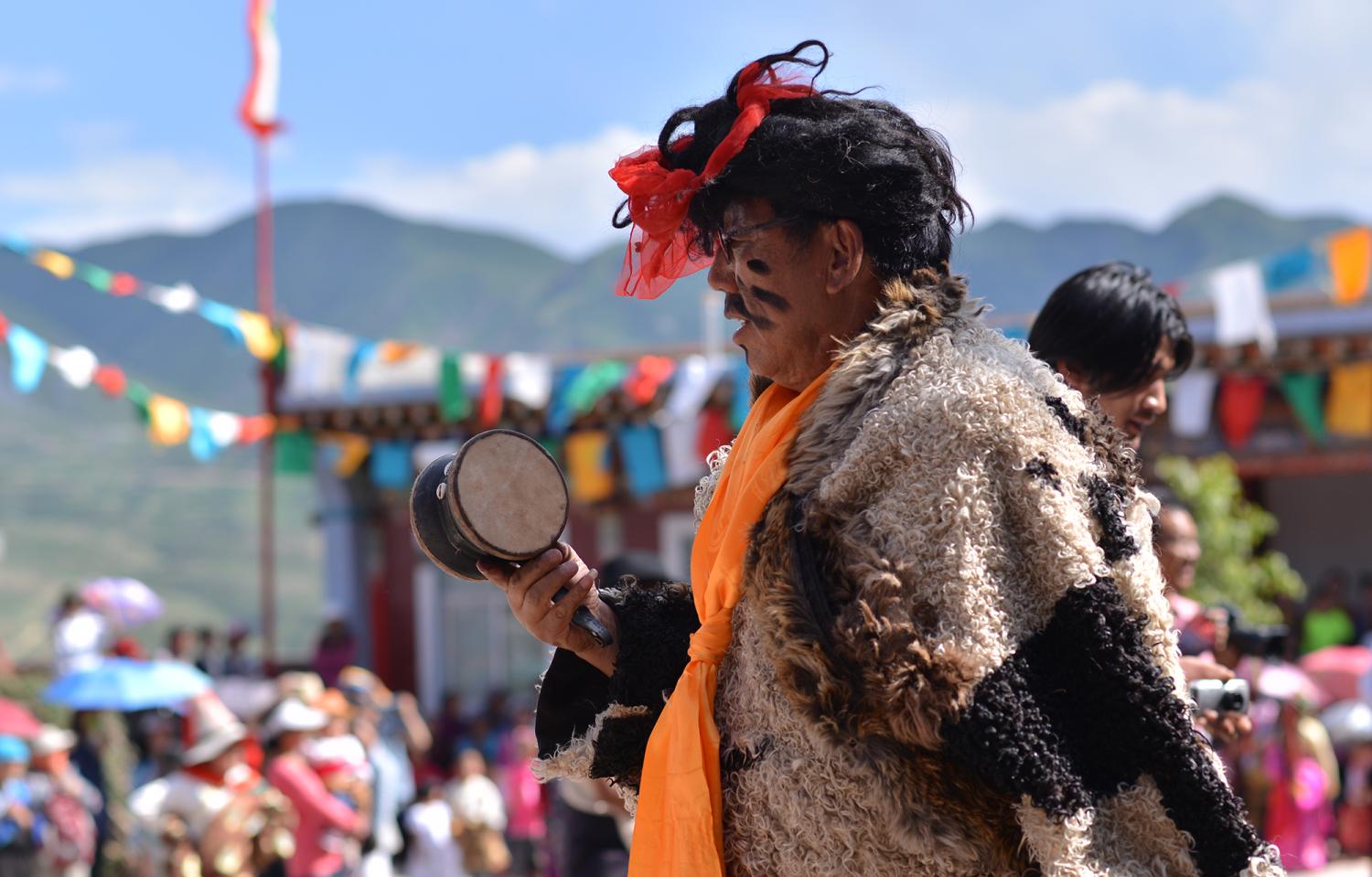 In the comedy portion of the festival, men dress up as women and animals and tell humorous stories. These stories are relevant to current community happenings and have a normative moral dimension. 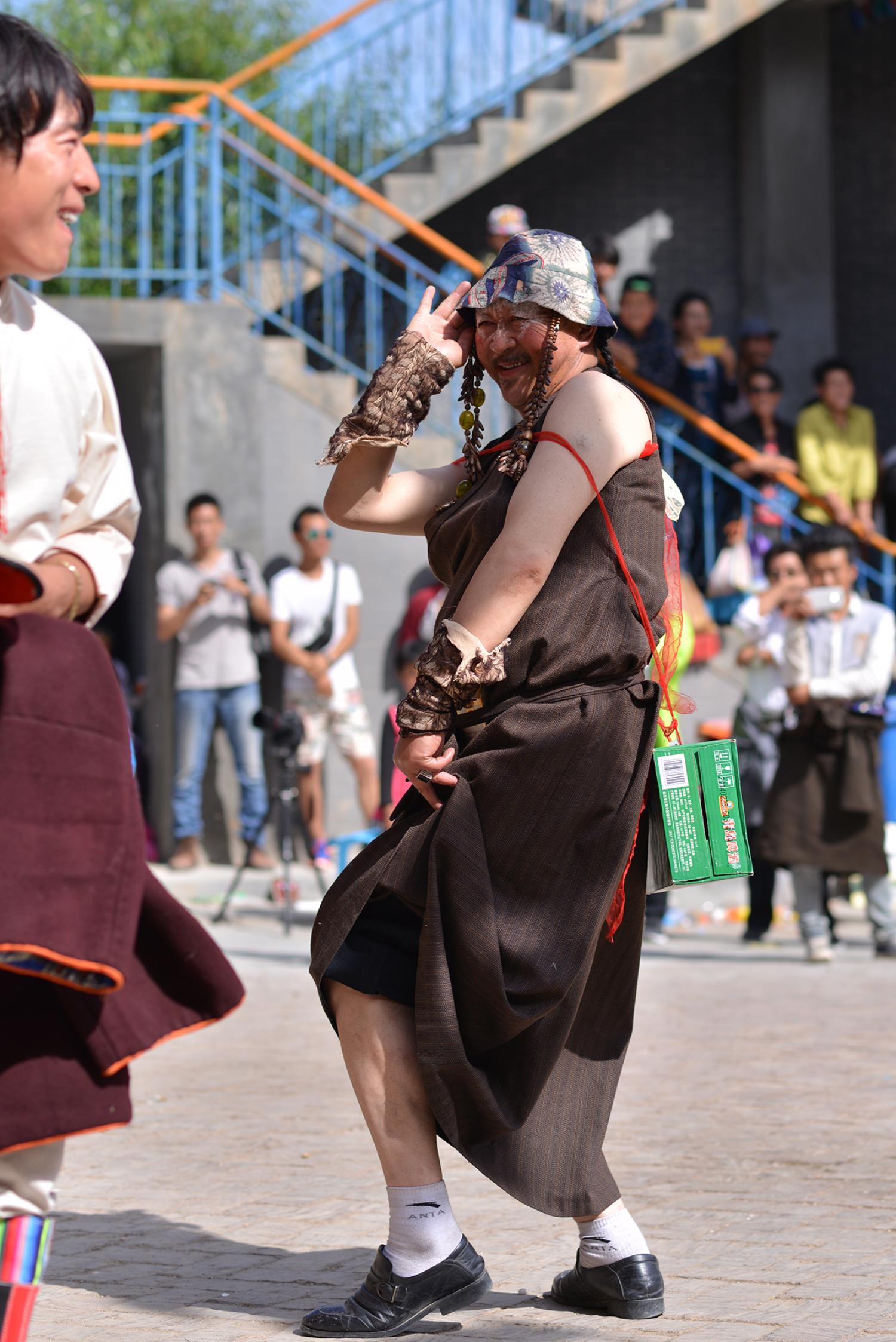 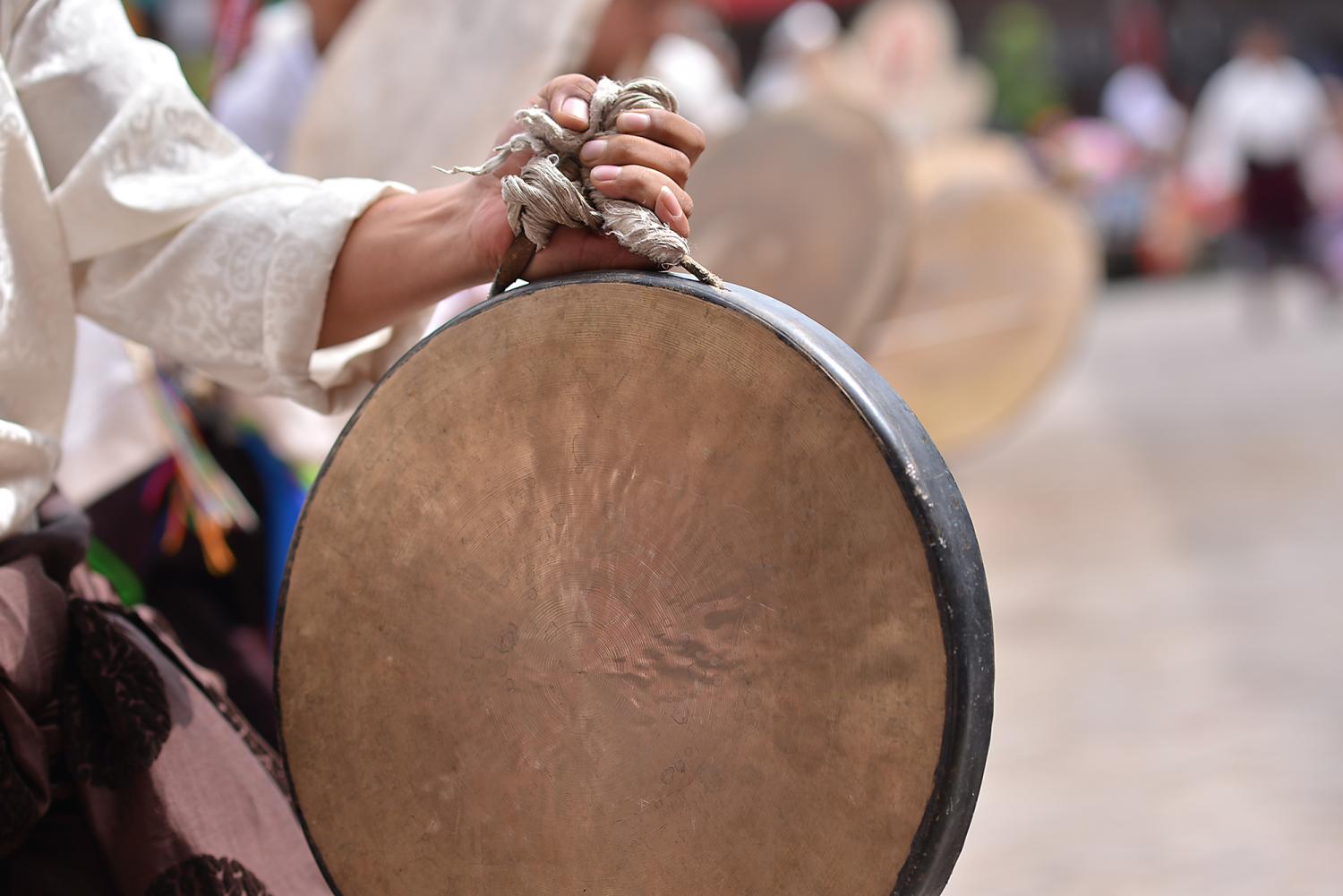 Rhythmic drumming and dancing continues with the La mgon pa (Lha mngon pa ལྷ་མངོན་པ), or “Manifesting of the Gods.” 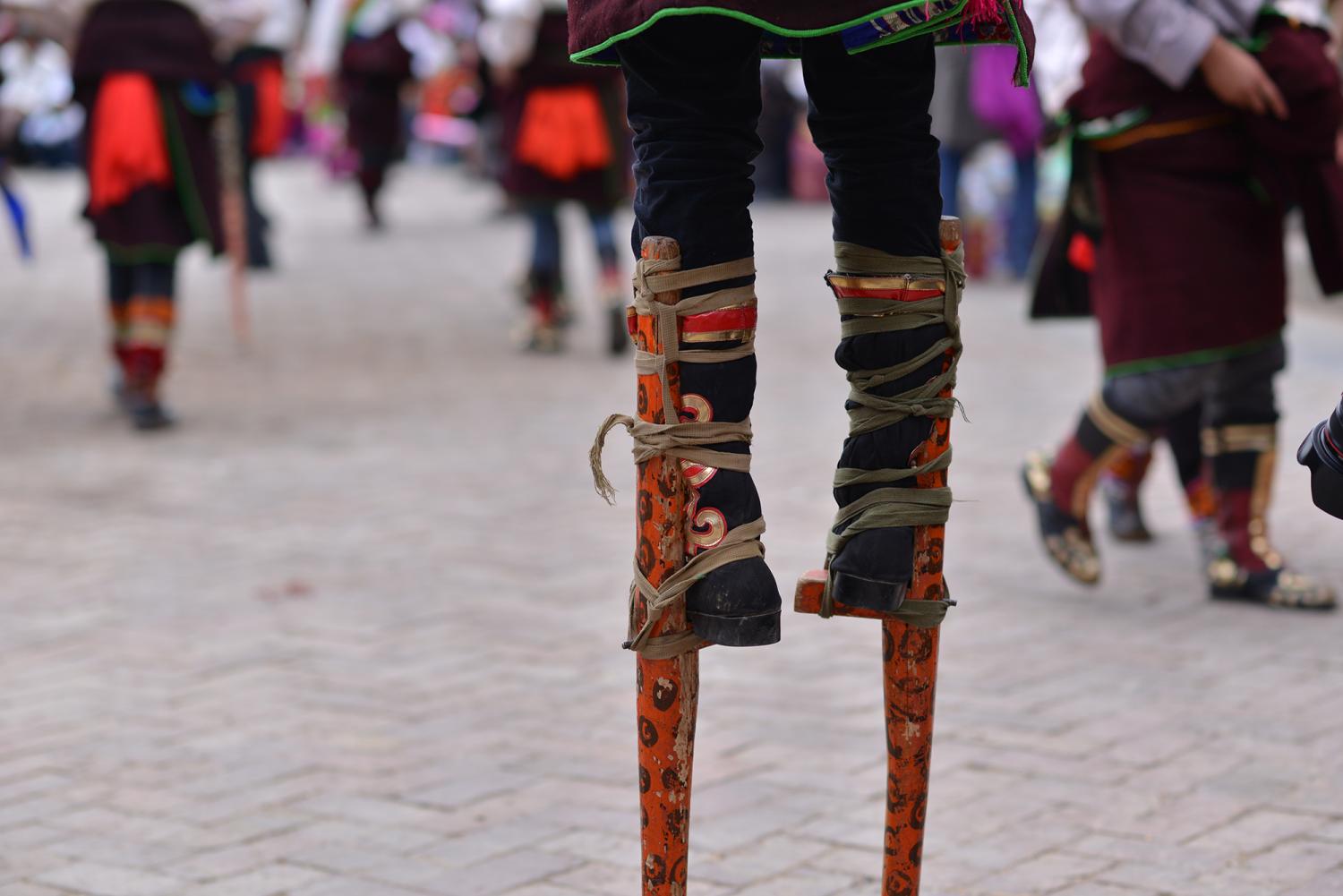 A young man wears stilts as he dances around the courtyard on stilts or “wooden feet” called Kang hung (Rkang shing, རྐང་ཤིང་). 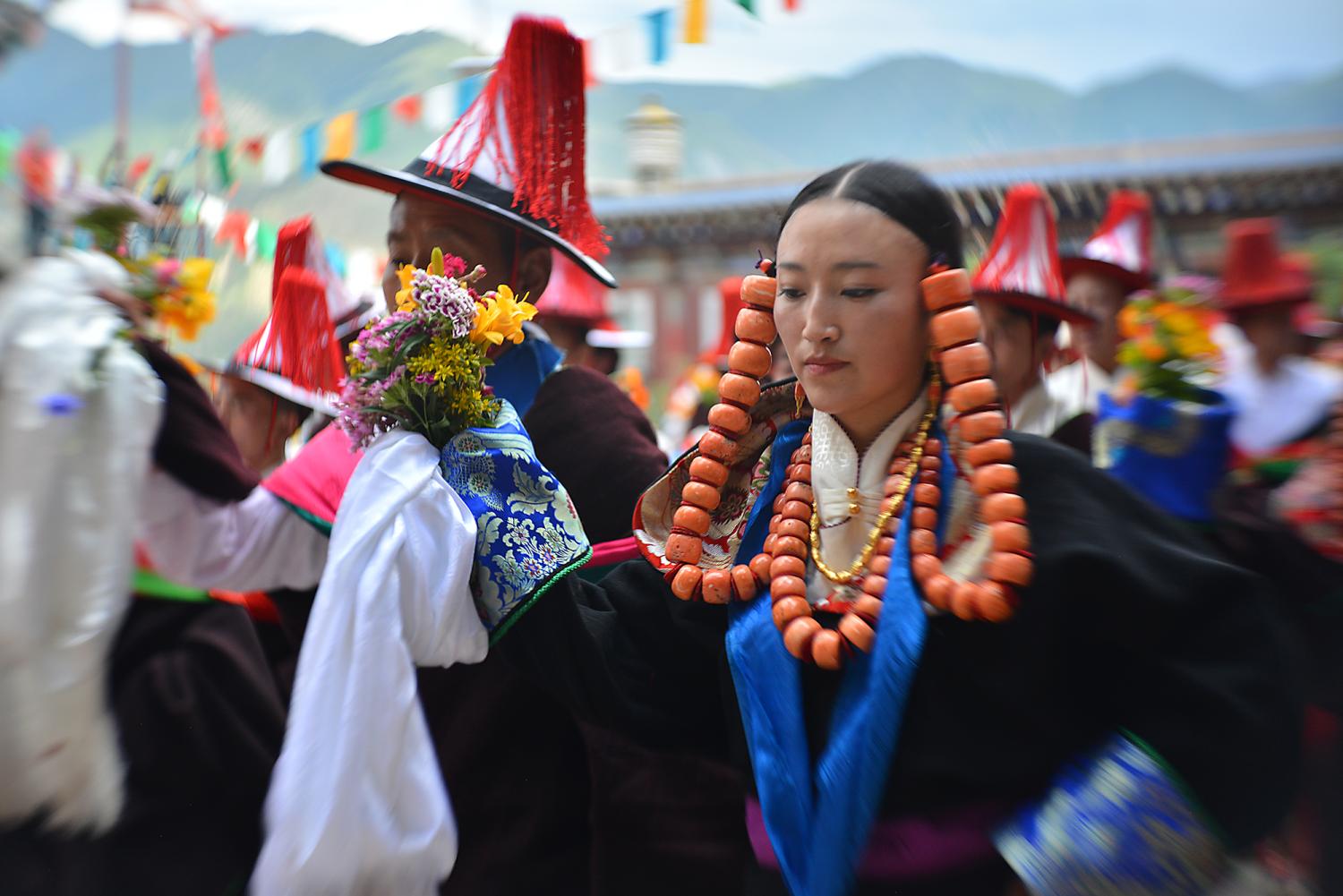 During the “Dance” or Gar (གར) portion of the festival, men and women wear fine clothes and jewelry. 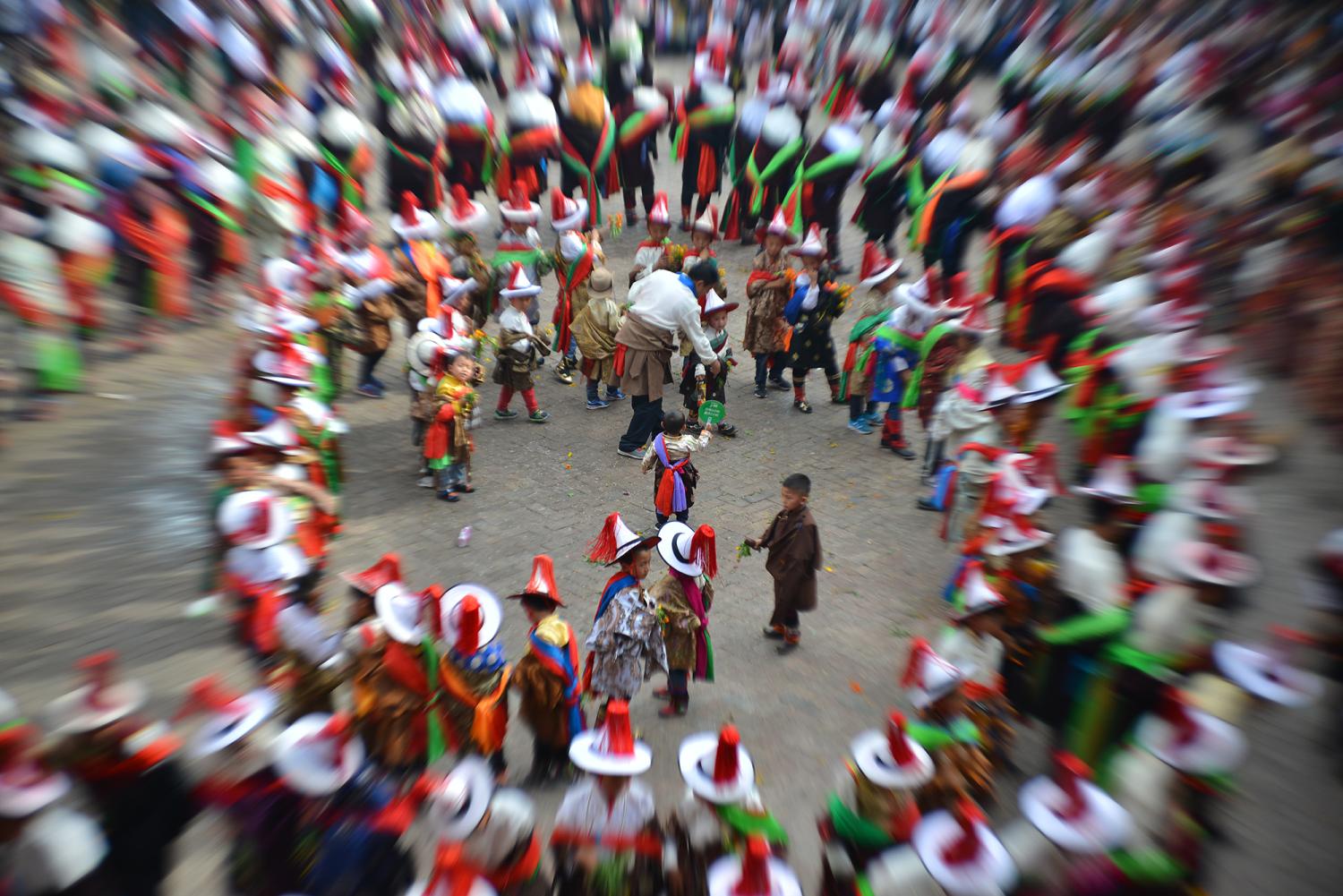 During the “Dance” or Gar (གར), men and women dance together in a swirling pattern, eventually filling the entire courtyard. 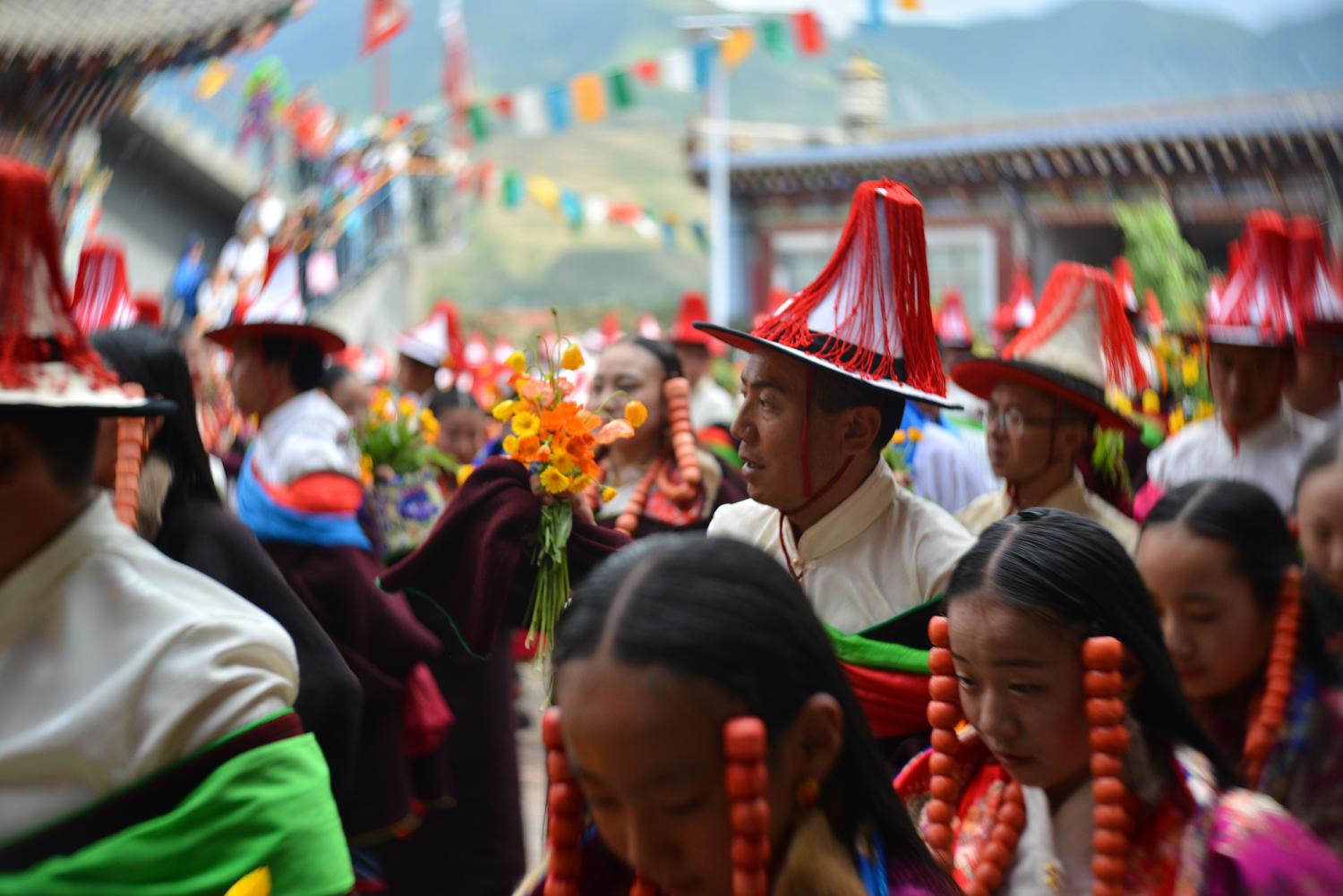 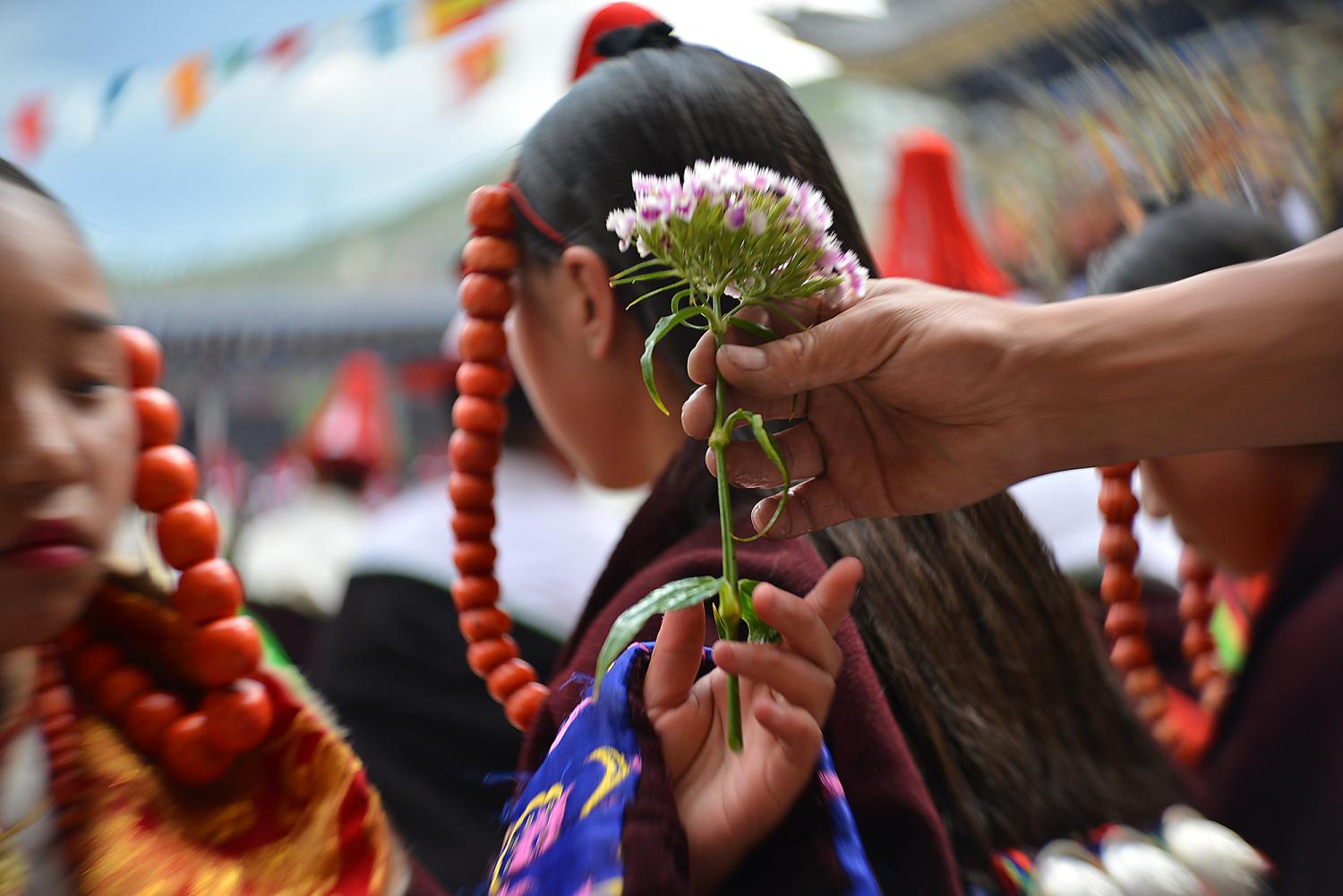 Only unmarried women dance during the festival. Because of this, there is a much wider age range among participating men than women. Men can be up to 45 years old. 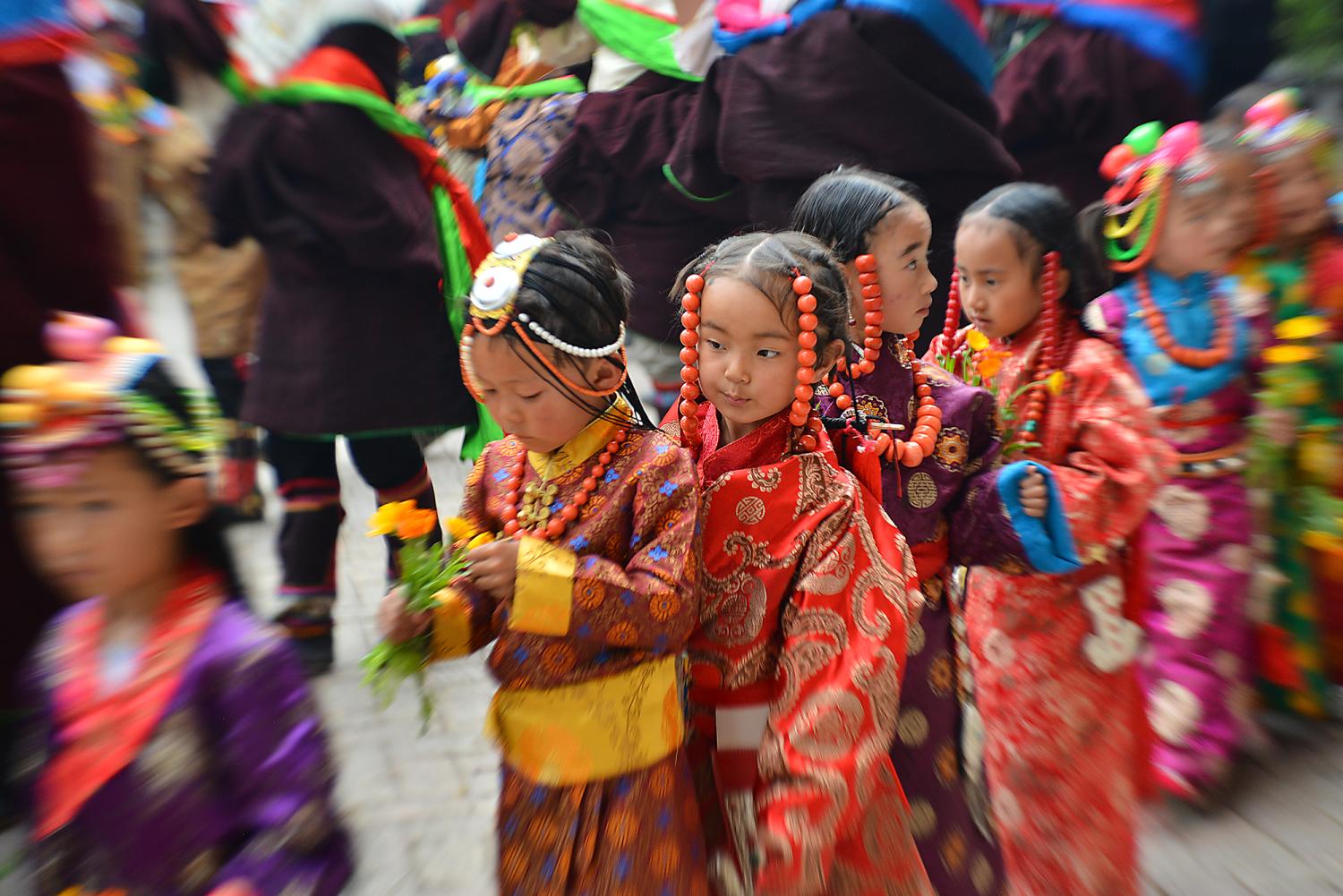 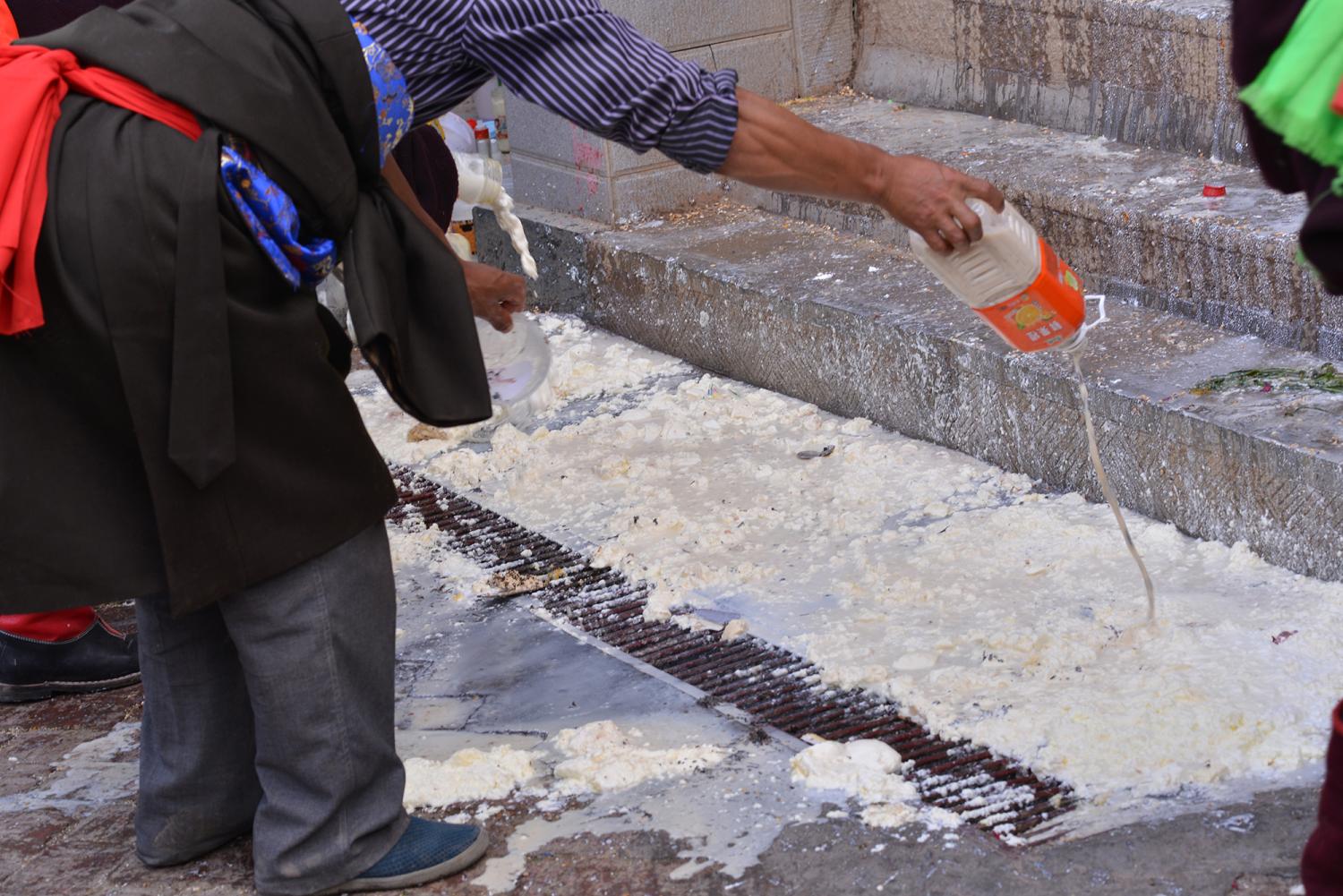 Alcohol and yoghurt are poured as propitiations. 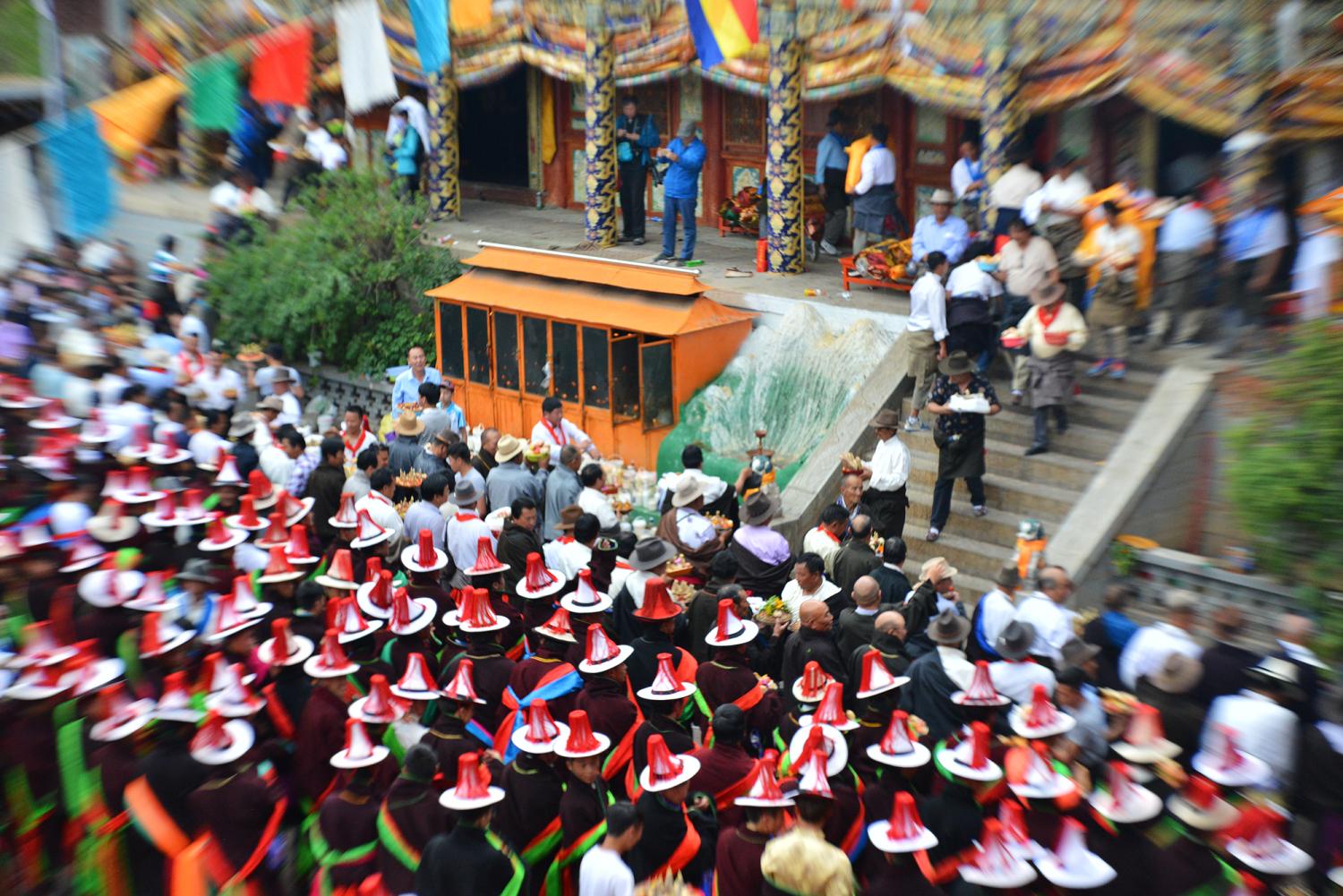 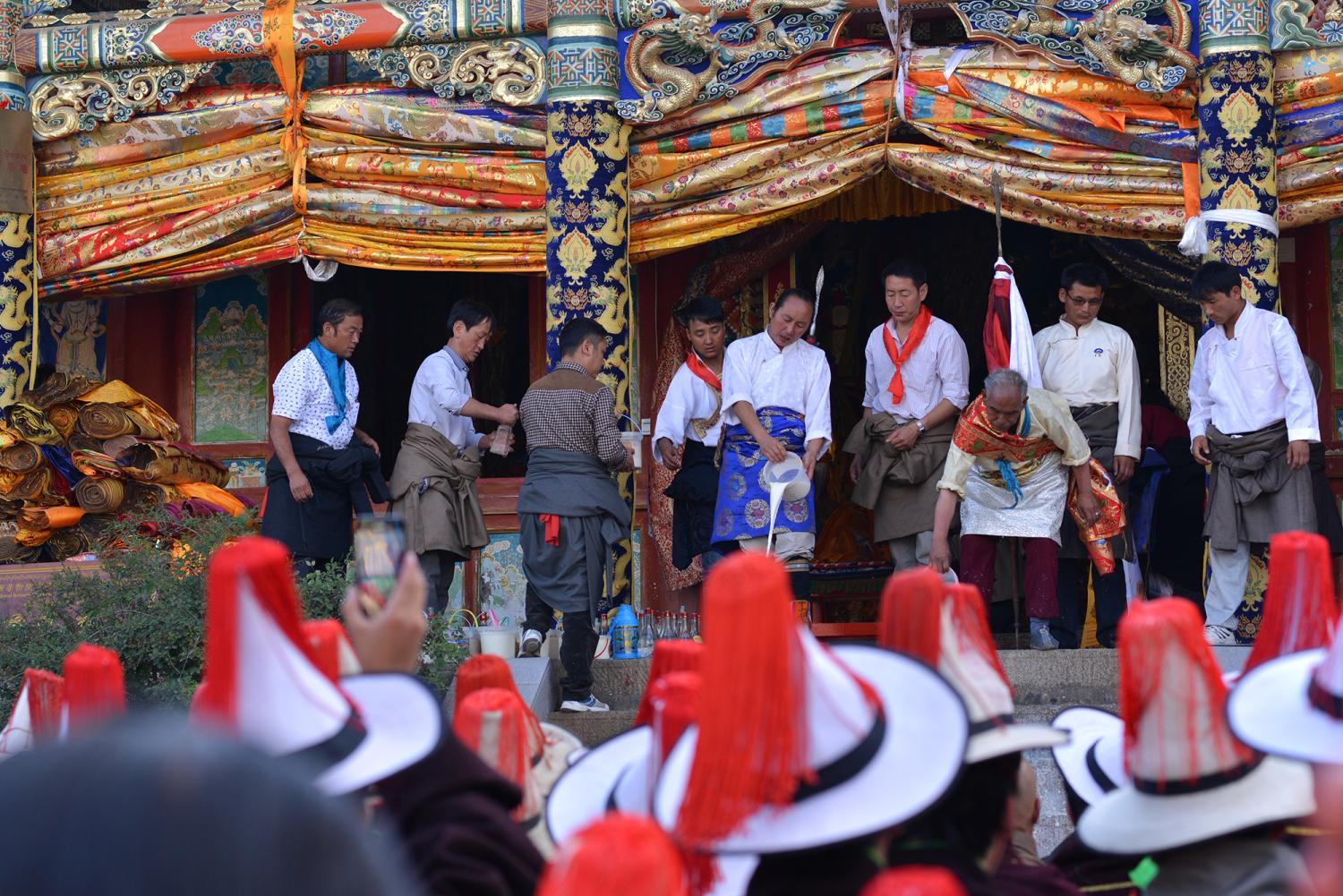 The village leader distributes gifts to villagers who are contributing to the on-going reconstruction of the temple. 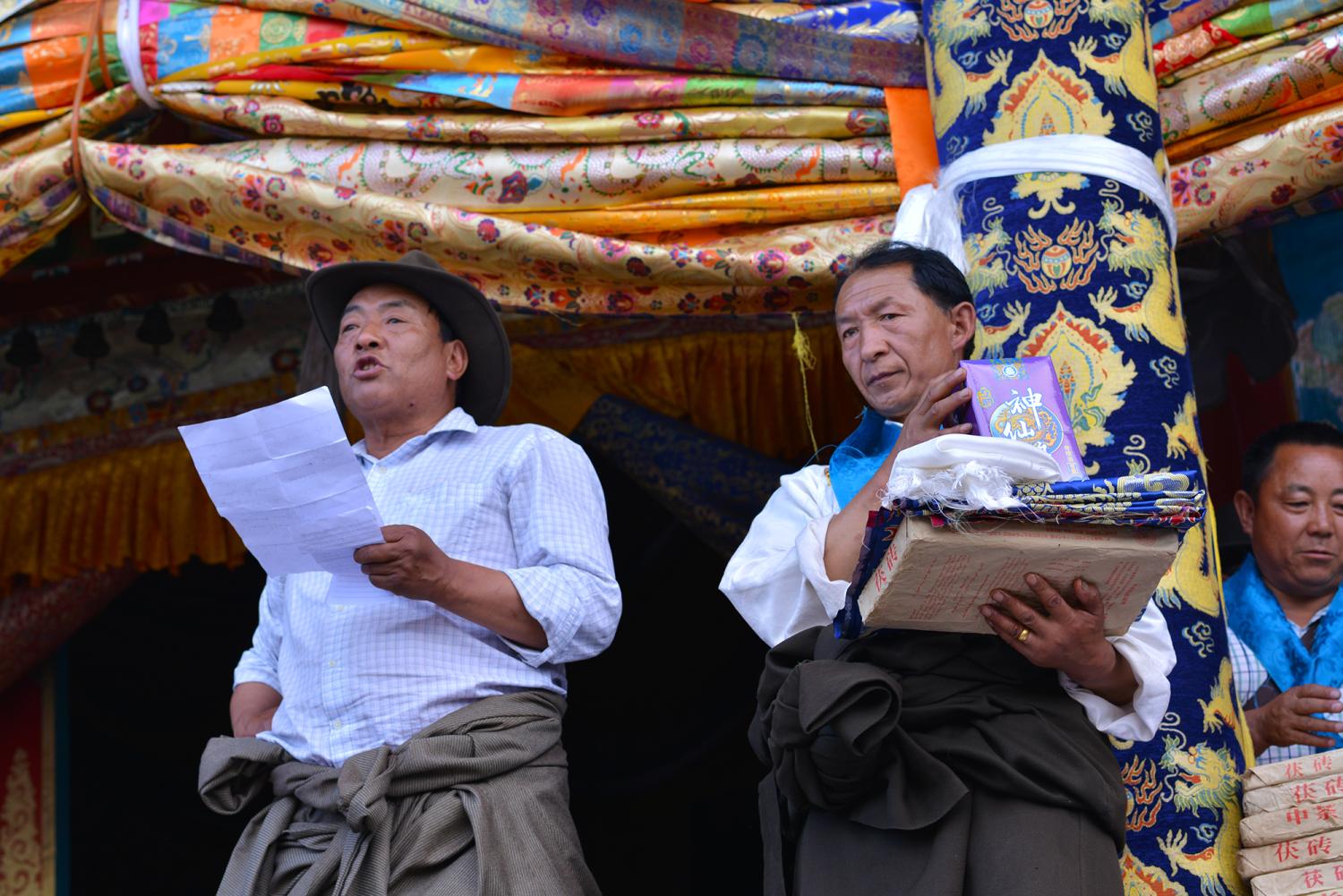 At the end of the festival, the La pa moves around courtyard in a trance. Finally, he conveys his messages to the audience through an interpreter. 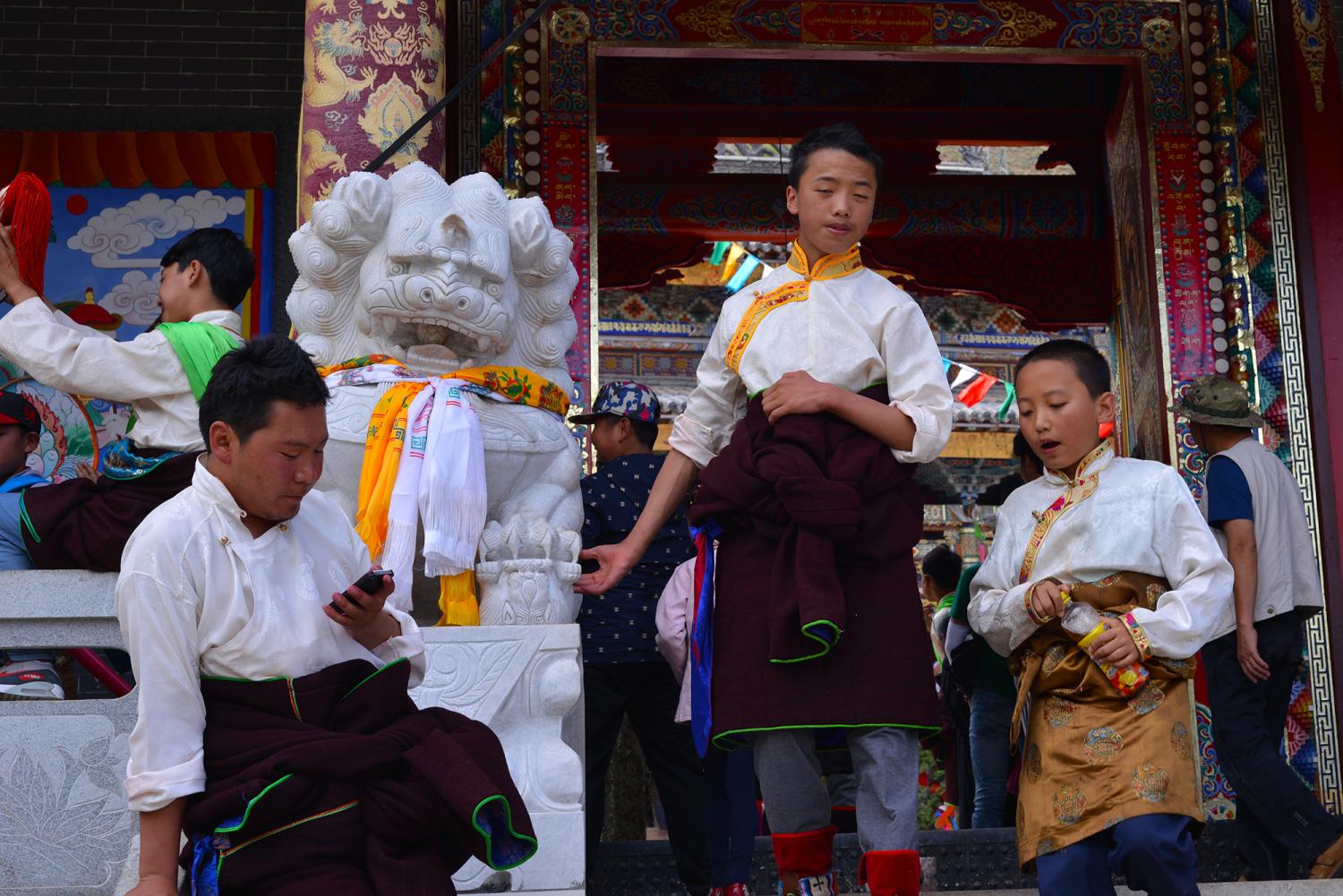 Resting outside of the temple.

During the sixth lunar month of the Tibetan calendar, usually the middle of July, villages around Tongren County Town (also known as Rebgong རེབ་ཀོང་། in Tibetan) in Qinghai Province/Amdo Tibet come alive with festivals that include feasting, dancing, and La ba (lha  pa ལྷ་པ),  the trance medium that is temporarily inhabited by a local mountain god. In the village of Sadjye (Sa dkyel ས་དཀྱིལ) near to the heart of Rebgong, the important deity is Anye Shachong (A mye Bya Khyung ཨ་མྱེ་བྱ་ཁྱུང་།). During the three days of the festival, he is carried on a wooden palanquin and will convey messages to villagers through the La ba. The photos in this essay all occur during the final day of the festival, called Lurol Chenmo (Klu rol chen mo ཀླུ་རོལ་ཆེན་མོ). I attended the festival in 2010, 2014, and 2017 and took photos during each visit. The images with the swirl effect are from 2017 and clean digital images are from 2014.

The final day of the festival is broken into a series of dances and performances. It also includes music, flowers, and offerings of alcohol, yogurt, grain, paper, and incense. These activities all occur in the courtyard of a temple built where the village abuts the mountain side. Since I first visited the festival in 2010,  Sadjye village’s temple has been drastically rebuilt. The burnt offering altar above the temple entryway has been reconstructed, a beautiful wooden veranda that shields villagers and tourists from the sun has been expanded, and a painted model of the mountain has replaced a simple drainage grill as the place to accept liquid offerings of yoghurt and alcohol.

The festival is not an instance of traditional culture surviving into the present. Since the Reform period of the PRC began in the late 1970s, more freedom to exercise religion and practice local customs has returned to a degree in Tibetan regions of China. Villages near Rebgong began to celebrate the Lurol festival again, but the practice couldn’t help but be drastically transformed in its revival. Today many of its participants live in urban housing, indeed the village of Sadjye itself is rapidly changing as the Chinese state promotes the urbanization and marketization of Tibetan regions. Villagers also innovate by adding dances and practices to the Lurol festival.

Finally, Lurol occupies an exceptional position in the religious and political life of the Rebgong area. Lurol festival cannot be called a Tibetan Buddhist practice, yet it is influenced by Tibetan Buddhism. It is situated between orthodox religion and lay customs. It also generates a center of power and authority that is outside of state-imposed political structures in farming villages and the urbanized neighborhoods that they are becoming. Of particular importance here is the figure of the La pa who, as an embodiment of the mountain deity, has political power. He can mediate village conflict as well as mete out punishment. Because of this, his position troubles the two dominant social structures of monastic power and sanctioned state power in the region.

I would like to thank Zonthar Gyal (Jerry, Suantairijia) for his help with this essay and for encouraging me to take these photos over the years.