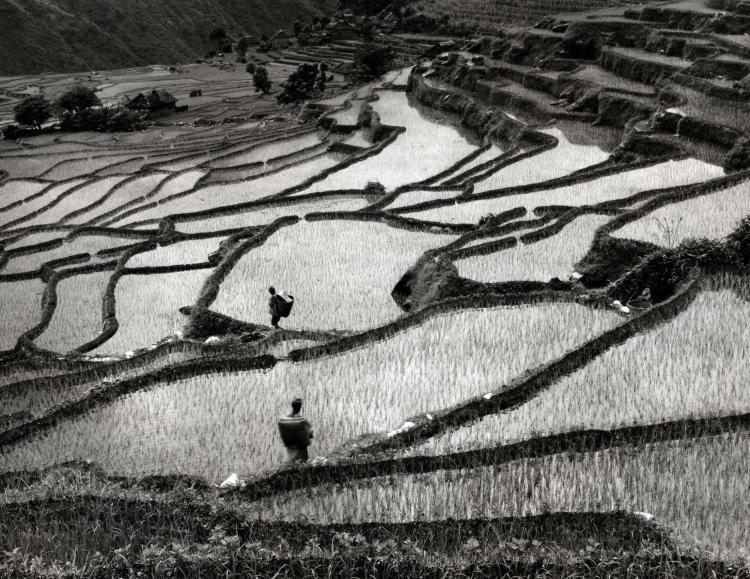 In conjunction with Himalayan Studies Conference V, taking place at CU Boulder September 1-4th, Norlin Library will host an exhibit, Mustang in Black and White, featuring photographs by Kevin Bubriski from the Mustang region of Nepal.

The photographs come from his book, Mustang in Black and White. The exhibit will be housed on the first floor of Norlin Library in the Underground West Gallery. Thanks to Andrew Violet and Sienna Craig for working with the photographer to create this exhibit.

About Mustang in Black and White

Mustang, Nepal, is known for its vibrant landscapes – blue skies, vermillion-colored cliffs, fluted canyons of deep ochre. It is a tapestry of Himalayan culture and history, a social and economic crossroads for trade, tourism, and Tibetan tradition. Today, the people of Mustang are navigating significant transformations: from the impacts of climate change across this rain shadow landscape to the lived effects of outmigration on communities who have relied for centuries on agriculture, pastoralism, and their role as culture brokers between the Tibetan plateau and Hindu South Asia. Mustang in Black and White captures this area’s elemental qualities, revealing the enduring cultural foundations and shifting daily rhythms of Himalayan village life. Kevin Bubriski’s masterful black-and-white portraits of this place and its people are coupled with Sienna Craig’s thick descriptions of what is, and is not, seen through the eye of the camera. Against the grain of glossy, idealized images of Tibetan and Himalayan lifeworlds, Mustang in Black and White illuminates the quotidian beauty and cultural complexity of this region.

Kevin Bubriski has exhibited worldwide; his work is in the permanent collections of the Museum of Modern Art, The Metropolitan Museum of Art, and the International Center of Photography, all in New York; the San Francisco Museum of Modern Art; the Yale University Art Gallery, New Haven; the Center for Creative Photography, Tucson; and the Bibliotheque Nationale, Paris. A recipient of fellowships from the Guggenheim Foundation, the National Endowment for the Arts, and the Asian Cultural Council, Bubriski worked for nine years in Nepal, and has photographed his journeys to India, Tibet, and Bangladesh. Author of Portrait of Nepal (Chronicle), which won the Golden Light Documentary Award in 1993, and Power Places of Kathmandu: Hindu and Buddhist Holy Sites in the Sacred Valley of Nepal (Inner Traditions), Bubriski lives in Vermont with his wife.