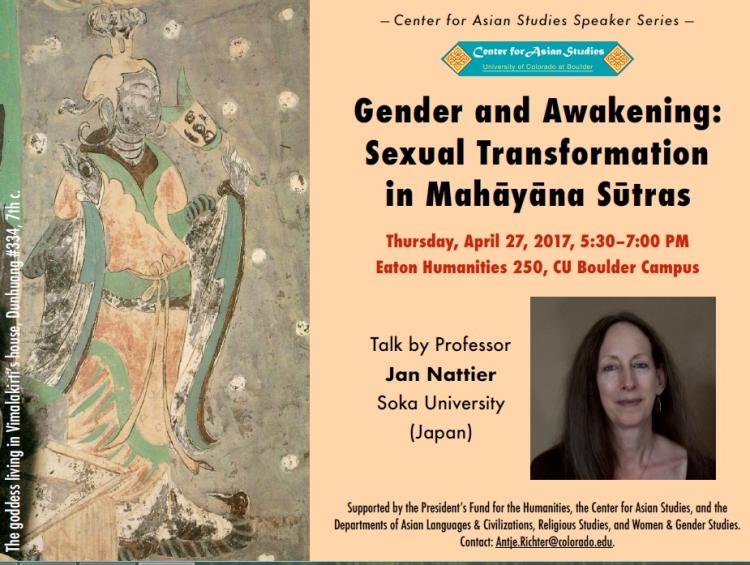 The Center for Asian Studies is hosting Jan Nattier of Soka University (Japan) for a lecture on "Gender & Awakening: Sexual Transformation in Mahāyāna Sūtras" on Thursday, April 27, 5:30-7 pm, in Humanities 250.

It is commonly held that the rise of the Mahāyāna opened new spiritual horizons for Buddhist women. Many modern writers, especially those inspired by feminist theory, have seen the non-dualistic language that abounds in many Mahāyāna scriptures as evidence that dualities of any sort—including dualities based on gender—were not important in Mahāyāna circles, thus creating a more egalitarian atmosphere for female practitioners. Just as a previous generation of scholars, inspired above all by the work of Hirakawa Akira, saw the Mahāyāna as having increased the status of lay people, so in more recent times the Mahāyāna has often been portrayed as eradicating previously existing barriers to the spiritual attainments of women.

A close look at the Mahāyāna scriptures that have come down to us, however, paints a significantly different picture. In this paper I will examine one subset of narratives featuring female characters: those recounting sexual transformation, in which women either suddenly (within a single lifetime) or gradually (at some point during the course of rebirth) turn into men. In contrast to the view that gender differences were not important in Mahāyāna circles, I will argue that these tales encode a decidedly non-egalitarian vision of what women can (and cannot) achieve.