Jacob Dalton to speak on "Evoking Enlightenment: The Rise of Poetic Language in Early Tantric Ritual," 5:30pm on April 17th 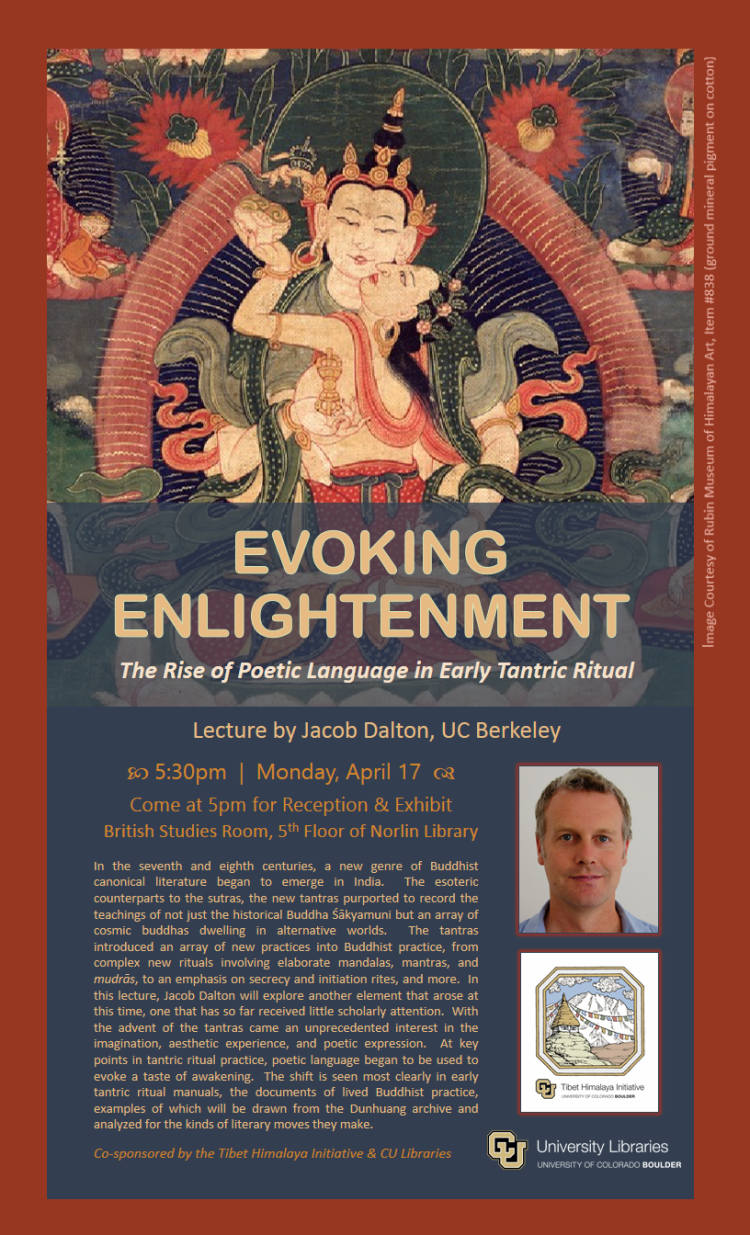 Please join us for a lecture by Jacob Dalton, Khyentse Foundation Distinguished University Professor in Tibetan Buddhism at UC Berkeley, for a lecture on "Evoking Enlightenment: The Rise of Poetic Language in Early Tantric Ritual." Co-hosted by the Tibet Himalaya Initiative and the CU Libraries, the lecture will take place at 5:30pm on Monday, April 17th.

In the seventh and eighth centuries, a new genre of Buddhist canonical literature began to emerge in India.  The esoteric counterparts to the sutras, the new tantras purported to record the teachings of not just the historical Buddha Śākyamuni but an array of cosmic buddhas dwelling in alternative worlds.  The tantras introduced an array of new practices into Buddhist practice, from complex new rituals involving elaborate mandalas, mantras, and mudrās, to an emphasis on secrecy and initiation rites, and more.  In this talk, Dalton will explore another element that arose at this time, one that has so far received little scholarly attention.  With the advent of the tantras came an unprecedented interest in the imagination, aesthetic experience, and poetic expression.  At key points in tantric ritual practice, poetic language began to be used to evoke a taste of awakening.  The shift is seen most clearly in early tantric ritual manuals, the documents of lived Buddhist practice, examples of which will be drawn from the Dunhuang archive and analyzed for the kinds of literary moves they make.

Jacob Dalton teaches Tibetan Buddhism and holds a joint appointment in South and Southeast Asian Studies and East Asian Languages and Cultures. He worked for three years (2002-05) as a researcher with the International Dunhuang Project at the British Library and later taught at Yale University (2005-2008) before moving to Berkeley. His research focus on tantric ritual, Nyingma religious history, and the Dunhuang manuscripts. His books include The Taming of the Demons: Violence and Liberation in Tibetan Buddhism (Yale University Press, 2011), The Gathering of Intentions: A History of a Tibetan Tantra (Columbia University Press, 2016).